Two things I absolutely love in games are housing and pets. And having both just makes a game better! Path of Exile already has a form of the first (hideouts), and now it is getting a form of the second. In fact, the next quarterly update and league is named after them: Sentinel.

END_OF_DOCUMENT_TOKEN_TO_BE_REPLACED
When Sentinel launches on PC and Mac May 13th (consoles on May 18th), players will get to experience these new adventuring companions as they roam throughout Wraeclast — but in a unique POE way. In fact, Grinding Gear Games’ implementation turns the idea of companions on its head; these pets aren’t there helping you, they are helping the mobs you are facing!

During a preview of the Sentinel league ahead of today’s streamed reveal, I spoke with Grinding Gear Games’ Chris Wilson to talk about the league, the new changes, and especially the pets! I can’t wait to check them out, even if they are working against me (in the name of better rewards, of course!).

The first moment Wilson introduced the sentinels, I was excited about having a pet. However, as he described the mechanic, I quickly realized they’re not pets in the way I know pets. In POE, outside of rare cases, the sentinels are working against you by buffing and helping out the mobs you are facing. Of course, making things harder for yourself in Wraeclast is exactly how you gather greater rewards. Players have control over when to use each sentinel as well as how the sentinel’s attributes are assembled.

As a game pet lover, I asked Wilson what the inspiration behind the sentinels was. Was it taking the idea of pet companions and twisting it around? Nope: It turns out the original idea was to have a parasite. Wilson explained that many of the most popular leagues have involved ways that the players get a temporary burst of difficult combat, where monster get harder but rewards are also greater. On top of that, the most successful of those come when players get to choose the difficulty level for themselves. This time, he said, the team wanted a mechanic whereby players could effectively change the difficulty for themselves by tagging nearby monsters, like a portable Breach.

“Our very first draft of this actually had an organic theme,” Wilson explained. “We imagined it as a kind of growth on the player because of course we want to go for something disgusting. And this growth tags monsters nearby.” However, this growth didn’t match well with the idea of swapping out and upgrading the growth. The final concept then was a drone that follows the players around, which turned out to be an alien construct — the sentinel.

So, what exactly is a sentinel and how will it work? Sentinels are constructs that will be collected — and even recombined together — as the player adventures through the game. They are indestructible by mobs, but they do lose power.  As sentinels are not constant companions, the player chooses when to deploy them to affect the situation around them. Each sentinel a player has can be deployed only once per area. There will be three types of sentinels that players can use, and three sentinel slots added to their equipment (one slot for each kind).

Do note that there are some rarer sentinels that are beneficial to players! For instance, the basilisk sentinel will temporarily turn all monsters nearby to stone, giving players an instant breather when they’re mobbed by mobs. However, these will be single-use emergency sentinels. Wilson explained that by making them single use, GGG can ensure they can be more prevalent in game versus being extremely rare multi-use items. 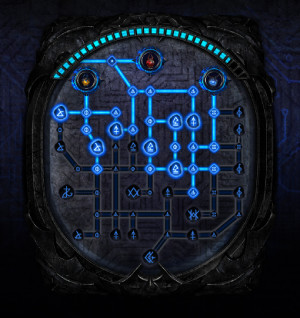 Not only do players determine when to deploy sentinels, but they have control over what makes up the sentinel. Magic sentinels can have various mods deployed on them, and players can alter which mods those are with the new crafting system. Keeping in that organic theme, Wilson described to me how players will take two husks of depleted sentinels (the parents) and recombine them together to create a new one (the child). Following genetics, this new sentinel can have aspects of one parent or both parents, or even be something completely unique that cannot be found through looting.

Sentinels are further customized with the controller interface, a circuit board type feature that has nodes that can determine the powers, properties, and behaviors of your sentinel. Players use filaments of power (which increases by the killing mobs) to connect nodes via pathways. The configuration can be changed at any time, giving players the freedom to change their sentinel’s builds as much as they desire.

And in a piece of very welcome news, Wilson revealed that there will be a free sentinel locker in hideouts so that players can store stacks of sentinel husks without clogging their inventories and stash tabs.

Taking the same idea as recombining sentinels, GGG announced that players in the Sentinel league will be able to use a new crafting currency to recombine their gear! The recombinator currencies are available for armor, weapon, and jewelry. Just as the sentinel crafting takes two pieces to recombine into a new one, the currencies allow players to take two pieces of gear and birth a new piece from them. Will it combine the stats of the old pieces, or will a completely new piece of gear be created? I personally am looking forward to this method of loot management; let’s see what I can come up with!

Of course, there is always more to a Path of Exile update than just the league. The base game gets plenty of changes as well, which will be coming up next! Check out the second half of our Sentinel reveal coverage.