We’ve finally left 2015 behind. And while it is perfectly natural to want to glance back in the rearview mirror over the last 12 months, in the case of The Secret World you can’t help yourself; there’s that odd sensation of something following you. While peering back, I half expect some shadowy figure to materialize in the corner of my vision and make my heart skip a beat. This is, after all, the king of creepy MMOs that we’re talking about.

Paranoia aside, the year was not a bad one for our favorite horror game. Sure, it had some downs tossed in with the ups, but that’s how life goes. And I think the year ended positive overall, with new content, new kinds of content, and the promise of even more content to come. 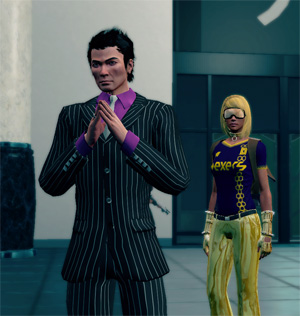 The lowest of low this year was that moment when Funcom’s financial troubles shot the little slivers of fear into the hearts of fans that they might lose the game. The happier news that the studio’s numbers had improved in that last quarter of 2014 didn’t continue as the studio saw a downward trend in first quarter. In August things seemed more dire as the company began looking for investors. Then in October, things reached a new fevered pitch as the studio asked bondholders to defer the debts, a request that was granted.

Another stab of fear came when then-Game Director Joel Bylos announced he was leaving his TSW position for a new one within the company. (We later learned it was to build The Park, so we can forgive him!) There were some who were very concerned about what would happen to the direction of the game at that point. However, the one who took over the position, Lead Designer Romain Amiel, was part of the trio with Bylos that created the roadmap of stories for the game, so he was more than familiar with what the plans were. And both devs have noted that the story line is mapped out until issues in the 20s!

Perhaps less visible was the loss of Cinematic Director Davichi, whom we learned in May moved on to other Funcom projects as well. Considering how integral those cinematics are to the story of TSW, that could have been a pretty major blow indeed. I don’t think it had any massive ramifications (after all, there was a whole team working on cinematics, not just one man), but I can’t help but wonder if that a contributing factor to the feeling that the latest cut scenes from Issue #13 seem just a little less polished.

Although housing itself was never lost, since we never had it in the first place, the hope of it sometime in the future was dashed for a spell. Luckily, devs came back to clarify and that spark was rekindled, even is just a bit.

Of course, the year was also filled with the joys of getting stuff — particularly content. While everyone will agree that TSW will never have enough new content (I mean, it’s great so we can’t help but want it constantly!), there was some. This year brought with it both new content and new kinds of content.

Although I know some will disagree, I count March’s New Player Experience as a positive for the game. There were problems with the learning curve, and players would drop out from frustration or confusion, missing out on the most important aspect of the game — the story. That’s just not OK. I fully agree that when mechanics prevent players from experiencing your main content that something should be done about it. I went through and experienced those changes for myself and found them to be welcome, and not nearly as drastic as some would proclaim. Another form of simplification came with the currency conversion, melding almost all of the previous various tokens into just Black Bullion.

Funcom fixed what could have been just an entry in the negative column and turned it a positive when it extended its springtime multi-issue pack sales to include veterans as well as new players. Who doesn’t want discounted bundles on the content they missed? Both pre-Tokyo and Tokyo bundles were introduced in March. The introduction of lucky coins could also be a possible negative turned more positive: When the game introduced the loot bags in the item shop, players would get understandably frustrated when they couldn’t get the item they actually wanted even after spending all that cash. With the lucky coins, which are accumulated from each bag you purchase, you can circumvent the RNG by saving up and buying the actual thing you want from special vendors.

Speaking of the item shop, what can be better than the joy of having? How about the joy of giving! Gifting was finally introduced in December, allowing players to send item shop goodies to their friends.

As for content itself, we had more adventures open up in Tokyo, including the Orochi tower itself with Issue #11, the basement dungeons of the tower in Issue #12, and adventures with Yuichi and Harumi in Issue #13. We also got mounts of sorts with the new sprint customization system; who hasn’t reveled in tearing through the streets of Kingsmouth on a motorcycle? Later came the hoverboards, and I can’t believe there is anyone who hasn’t wanted to ride a hoverboard! A mini-dungeon was added between issues, as was a new achievement vendor that dispensed goodies.

In 2015, we were also treated to new kinds of content. I’m not talking about new areas, or new mechanics here — although there were those, too — but rather about alternative ways to get your Secret World fix besides logging in. Back in March there was a forum game for players to participate in. This #IAMTSW contest wasn’t just for one type of player either, but offered something for various playstyles from crafting to PvP to RP to cosplay to videography. Some might question this approach of gaming outside the game, but it fits perfectly with TSW. After all, the game is all about blurring the lines of reality between our world and the game, so what’s more appropriate than bringing the game out into our world?

Another positive have that TSW gets to boast about is its community. Granted, it had the community in other years to, but this year there were more community-run events for players to participate in, from a major RP investigation mission in April to a list of other events all summer long. Players also rallied together to help the Malala fund.

Now you can’t talk about a new kind of content without mentioning The Park. Well, more than mentioning — doting on it! Based on a favorite location within the game, this single-player experience released at Halloween epitomized the essence of what is awesome about The Secret World. The atmosphere and the story were worth far more than the $10 -12 price of admission, even if the game only lasted a couple of hours. (Or three, if you are me.) And the fact that it tied back into TSW’s new Halloween event was superb! Speaking of that holiday event, I have one friend who admitted to being creeped out more each time she completed that mission chain until she was fully glad to see it leave! That’s when you know devs did something so right. The Park and what it represents is one reason I am very much looking forward to 2016 with The Secret World.