Gaming analysis firm SuperData is touting a new report for marketers today, shedding some light on the shape of the industry so far in 2017 — for everyone. Yep, today’s report is free, as long as you’re willing to hand over a mailing address, so let’s run down the highlights: 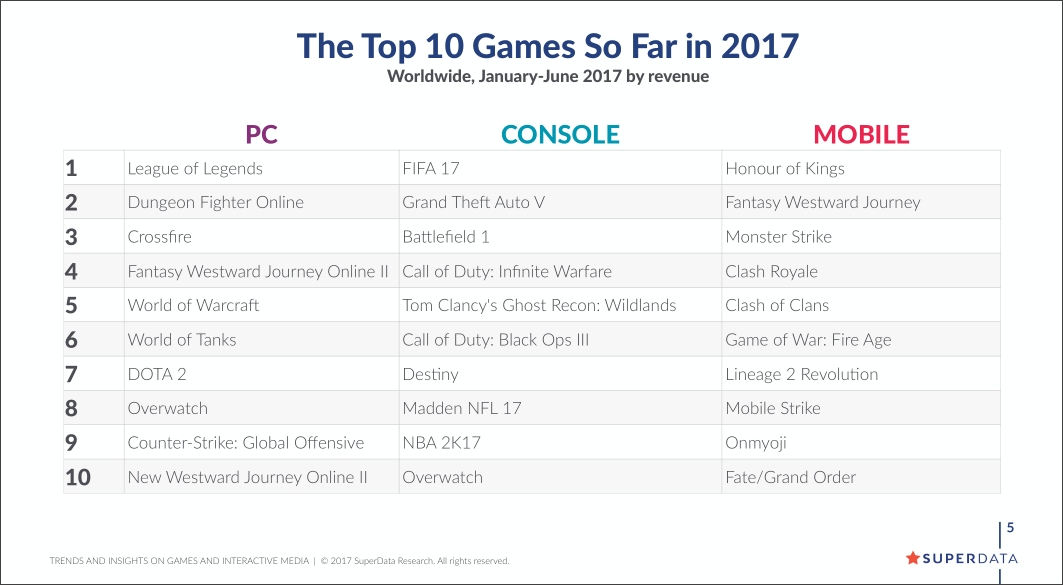 Taking the year to date, the most popular games on PC, console, and mobile aren’t going to surprise anyone, since they’re the same games that have been making the lists all year, including League of Legends, Grand Theft Auto V, Destiny, and yep, World of Warcraft at #5 on the PC chart. Pokemon Go isn’t on the mobile list. 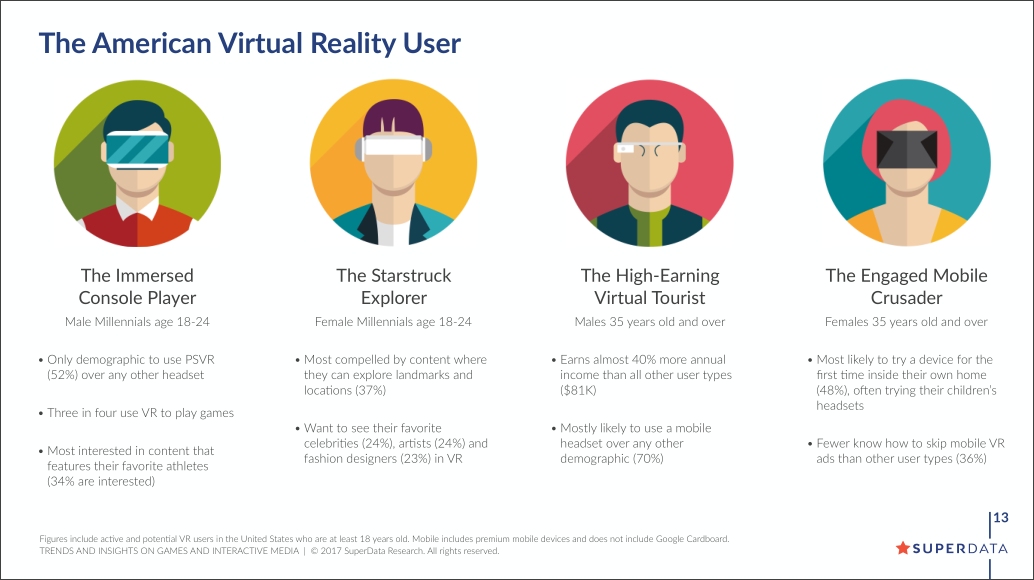 I have to say the reaction to the 46% women thing in the comments below makes me a little sad. It’s almost like y’all don’t WANT it to be true. I’m sure you were much happier being catfished. =(

btw, resistance is futile. women are also taking over heavy metal. deal with it!

OK, so I’ve read through the whole report, no wonder this one is free: it’s garbage!

No data to back up their predictions or conclusions, not even any explanations, just random statements. I mean, just the VR prediction alone (15x more revenue within 3 years)….whats that based on? Every previous prediction from SuperData about VR has proven very, very wrong, but with no explanation they expect us to swallow this? Oculus and Vive’s business plans all revolve around generating money from software with predictions of 75% – 90% revenue coming from software, the rest from hardware by 2020. Yet, SuperData is predicting a 50/50 split.

Just seems silly to me, I don’t know why SuperData is held in such high regard.

I mean, they even state in this report and on their website that they only collect data on roughly 500 games. 500?!?! Across all platforms, 500 is such a small percentage, it is almost insignificant! Open up your app store and look at how many games are available for Android / Apple. Open up steam and see how many games you can buy. Look at the catalogues for PS4/XBO. SuperData collect data on like 1% of the games market and then hope we swallow their predictions. Nope.

How so? Some of us aren’t taking everything Superdata says as gospel so… you think we hate women gamers or something?

I will say though, on my Xbox live friends list, of those who I do know are female, quite a few them of regularly do play Call of Duty. On Xbox LIVE chat, the few times in recent years I have hopped into a CoD, I have heard at least one woman over voice chat (360 versions because XB1 voice chat has a very low percentage of users compared to 360). So logically, if only a few people are talking compared to the overall amount of players in a match and at normally one of those on chat is a woman or a girl, then logically there should be more who just aren’t using the voice chat.

Ironically for as much as people categorise Call of Duty, it is from my anecdotal experience, it has got quite a diverse player-base compared to say a Battlefield. Maybe because it is more main-stream. Or maybe, the supposed “Dude-Bro” audience who plays CoD is actually less caring of the gender of their fellow player than supposed “hardcore real gamers” who play the Rainbow Six: Sieges or even the Overwatch’s.
Overwatch has a very toxic playerbase, while Call of Duty has a lot of swearing, but not as much malice as other more popular shooters among the ‘hardcore’ or the ‘real gamers’.
There is a very real distinction to be made between swearing and malicious intent. Minecraft 10 year olds also might swear like a sailor, but might not have some deep-seated issues with diversity which you might get from someone who plays anime games all day.

It is interesting that the Minecraft’s and the CoD’s, the mainstream, filled with children and dude-bros, tend to be on the whole, far less toxic and sexist than the typical forum dwelling person who is convinced that woman are tying to take away their gaming.

The news that you can play a female in Call of Duty back in Advanced Warfare compared to the news that you can now play a female in Battlefield elicited two very different responses. It is only now with CoD: WW2, the new CoD which the ‘hardcore real gamers’ are now interested in, that suddenly the idea of a female option (which has been in the last two CoDs) is now an outrage, when before the CoD audience largely didn’t care.

Some will say “oh well its because history”, but these are also games where you disregard history with how you’re playing anyway, so history is more a general setting than something to be held hostage too. This isn’t Verdun.

Make you a bad person? Of course not. But the mere fact you have to question how many women play the games you mentioned IS a problem. Why are you questioning it? What does it change in your life? Nothing.

This irritates me because I have been actively gaming for a long time and I have seen more and more ladies joining the fray, I have seen a new generation being raised as gamers REGARDLESS of gender. And that’s important.

In another 10 years I sincerely hope we can avoid reaction like yours and similar ones down below. It’s regressive and needs to stop.

“Why are you questioning it? What does it change in your life? Nothing. ”

I’m not questioning the number of female gamers. What I’m questioning is the amount of money spent by women on gaming. This is because I’m sick of constantly being told that gamers need to “quit being so sexist and/or misogynistic”, that games need to cater more to women, that having scantily clad female characters is “problematic.”

There’s nothing regressive about wanting the game companies to cater to the people who spend money on gaming and ignore the people who just complain about how horrible male gamers are. I see this constant push of “50% of all gamers are women” as a way to tell guys to shut up, as a way to tell us that our opinions don’t matter. I see the focus on the percentage of gamers, as opposed to the amount of money spent by them, as part of the constant push to shut us up.

I’m really skeptical of the claim of 46% gamers are female.

By what platforms? Genre? Etc.

So what if 46% of all gamers are female. Do they spend 46% of the money that games make?

Considering that the industry has been carefully avoiding answering THAT question for years now I’d say probably not.

I like to read these articles to see what ridiculous claims “games analysts” are going to pull out of their ass next. This one really delivered.

We are starting to see the Q2 numbers come in. Latest one seems positive:

Activision reported Q2 adjusted EPS of 43 cents, beating estimates by 13 cents. Sales came in at $1.63 billion, an increase of 4 percent year over year.

See the biggest problem with studies like these is they don’t break down gender by platform. It is easy to say that women make up 46% of gamers when you don’t take into account the fact that women make up 61% of mobile game users when 70% of adults own a smartphone vs the 40% that own consoles.

That vastly skews how women are represented in the video game market so developers for PC or console should take reports like this with a grain of salt while mobile developers should be firing on all engines.

Now as to this study specifically, it doesn’t really say that 46% of gamers are women (although that is the conclusion it tries to draw). It states that 46% of the people that watch Twitch and gaming content online are women. So this doesn’t really explain how much women are actually buying or playing games.

” so developers for PC or console should take reports like this with a grain of salt ” Although, if the PC devs actually read reports like this, would they be PC devs? Not only is mobile the largest digital platform but “Mobile revenue will increase by $6.7B this year, while PC and console combined will add another $1B. “

It’s so laughable that Game of War and Mobile Strike continue to be in the mobile games top. I was playing a different game once, which had cross promotion offers where you could get some free premium currency of you played GoW / MS to certain base levels, so I did. And wow, it was terrible. I wouldn’t even call them games. Boring can’t begin to describe the experience. Think of a toturial where you are guided through everything step by step and don’t have any freedom because you have to do exactly what the toturial tells you, but instead of 5 minutes it lasts for hours, or your entire stay in the game. It’s so sad that people pay for this stuff.

It’s not lockboxes that’s the problem; it’s the TYPE of lockboxes these companies sell, Bree.

You laugh, but men have cottoned on to the fact that the steadily encroaching horde of women is coming to take our stuff. Once we use our expertise in STEM jobs to kill every living organism with an X chromosome we’ll see who’s laughing then!

You realize men also have an X chromosome?

The joke. You completely missed it.

YOU FOOL! You’ve damned us all!