END_OF_DOCUMENT_TOKEN_TO_BE_REPLACED
Throughout most of EVE Online‘s lifetime, players have developed their own third-party applications (and yes, spreadsheets) to help organise and enhance their gameplay. We’ve got skill training calculators, websites for keeping track of structure fuel, databases full of information on items, and advanced industry and market tools that look like they belong to real world stock brokers. Most large alliances also now use Slack or Discord to organise out of game, have their own dedicated voice comms servers, and use tools like Jabber to notify members of important events.

CCP Games itself has added some brilliant in-game tools over the years that help players organise too. We now have a great in-game Calendar and event system, a customisable notification popup tool, corporation bookmarks, and an official smartphone app. We even have the ability to simulate and share ship fittings, and a new Agency panel that helps new players find content near them. These are all extremely useful productivity tools, but with a few improvements I think they could be even better!

In this edition of EVE Evolved, I discuss a few improvements I’d love to see for EVE Online‘s calendar, Agency interface, and official mobile app that would help players organise and work together more easily. 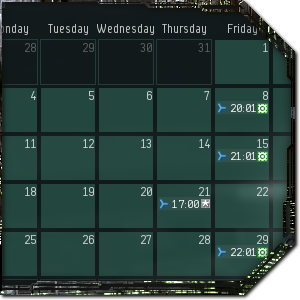 The Calendar is one of EVE Online‘s most useful and overlooked small features, helping individuals and corporations to schedule events for particular times and keep track of everything from moon mining fractures to CCP-run mass-test events.

Your calendar is fully accessible in-game, viewable in the EVE Online mobile app, and can be incorporated into third party applications via the EVE API. Most large alliances will use their own out-of-game tools to organise members instead of using the calendar, but a few improvements would be of enormous benefit to individuals and small corporations. 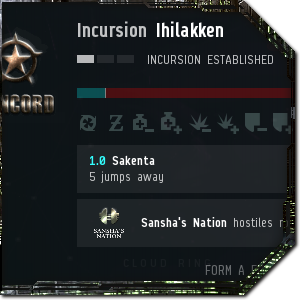 It’s been a while now since CCP added the Agency user interface with the Lifeblood expansion, and it’s working pretty well. The panel shows you a map that highlights a variety of mostly PvE-related activities nearby, and it keeps track of special timed events such as the Crimson Harvest and Guardian’s Gala.

We can see accessible mission agents, asteroid belts, Sansha incursion constellations, Resource Wars sites (though that feature is dead on its feet), pirate strongholds, and cosmic signatures in the system to scan down. This has been very useful for newer players, but it could be improved. 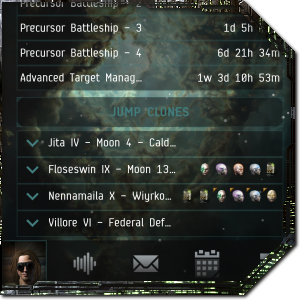 The official EVE Online Portal app came out on Android and iOS at the end of 2016 and was one of the reasons I got an Android phone, but it could really stand some improvement. It lets you view your skill queue and jump clones, shows a limited set of in-game notifications, and lets you view your EVE calendar. The app also lets you accept or reject calendar invitations to events, and both read and reply to in-game mail from your mobile device. Player-built alternatives such as the EVE Droid app can already do much more than this, with everything from ship fitting tools to market transaction logs.

EVE Online has a long history of player-made tools that act as companions to the game, but it would be great to see the official tools beefed up further. The Calendar could be made even more useful by letting us automatically add everything from enemy structure reinforcement timers to industry jobs, and there’s a ton of scope for improving the Agency panel and the official EVE Online Portal app.

The mobile app in particular should be the ultimate companion for EVE that lets you stay in touch with everything that’s important to you while away from the game, and a social tool that keeps you tied to the community during the day. Adding tools such as chat channels and new notification and ping options can only serve to keep players invested in EVE and let them know when something big is going down, so they can be there when it matters.

Design a game with Eve’s setting/rulesets, only with more traditional combat ( Freelancer ) and you and your company will be overnight success stories. You’ll swim in gold like McDuck and laugh maniacally.

That’s probably not feasible. EVE’s setting and ruleset enables battles involving thousands of players in the same place in realtime. This is only feasible because EVE’s server is able to run on a slow 1-second cycle and can use time dilation to slow down to 10% normal speed when the server node is under heavy load. And that’s only possible because the hands-off controls are designed to minimise the number of actions that need to be sent to the server, processed, and received by all players.

If you add traditional twitch-based controls and dogfighting style combat to EVE, you must necessarily limit the number of players who can be in the same place at a the same time to somewhere between 16 and 32. Even Star Citizen is only aiming to hit up to 100 at the extreme end of the scale with this type of gameplay, and they’re a long way off that (I think they’re stuck at 24 per instance at the moment).

Limiting the number of players in the same place is fundamentally incompatible with EVE Online’s setting and rulesets, which create emergence through putting all players in a single instanceless and shard-free server to force people to have to deal with each other. You can’t jump 100 people into a star system to make it hit capacity and prevent people from using it, you can’t force the server to spawn a second shard so you can bypass a pirate gate camp, and you can’t move to another shard when you lose your territory. Change that and you change what makes EVE compelling in the first place.

Too right! There are games trying to merge the two ideas such as Dual Universe, but they may end up needing to use similar control schemes to make it work. Hopefully we see more advances in this area over the next few years!

Last time I checked, there were already too many tools playing EVE Online, Brendan! j/k

Thanks! The day I stop writing about EVE Online is the day you know it’s actually dying :D. EVE Evolved runs every two weeks now, usually on Sunday but sometimes gets pushed to Monday if it’s a big-hitting topic, this week’s is more niche and aimed at the EVE community so it’s in the regular slot. If there’s anything in particular you’d like to hear about, shoot me an email at brendan@massivelyop.com and let me know :D