Surprising absolutely no one, Red Dead Redemption 2 killed it (and the horse it rode in on) in October. According to SuperData’s digital games revenue report for the month, the wild west game barreled into the console lists in the second slot, just behind Call of Duty: Black Ops 4 (protip, “IIII” is not actually the Roman numeral for the number four). Destiny 2 has vanished from the console lists after holding the top spot in September.

On the PC side, World of Warcraft has dropped a few spots thanks to surges from COD and Fortnite. Monster Hunter World has vanished too, replaced by new entry Assassin’s Creed Odyssey. The top four slots held even, meaning that League of Legends is still not back on top.

It was a good month overall, the firm notes, as “full game download revenue surpassed $1 billion for the first month ever,” but there’s concern for Grand Theft Auto, which seems to be losing ground to its new Rockstar sibling, and Overwatch.

“Overwatch’s disappointing run continues. Overwatch microtransaction revenue in October was up from September due to the Halloween update but down 20% from last year. This now makes it five consecutive months of year-over-year declines for Overwatch, which had previously shown consistent growth since launch.” 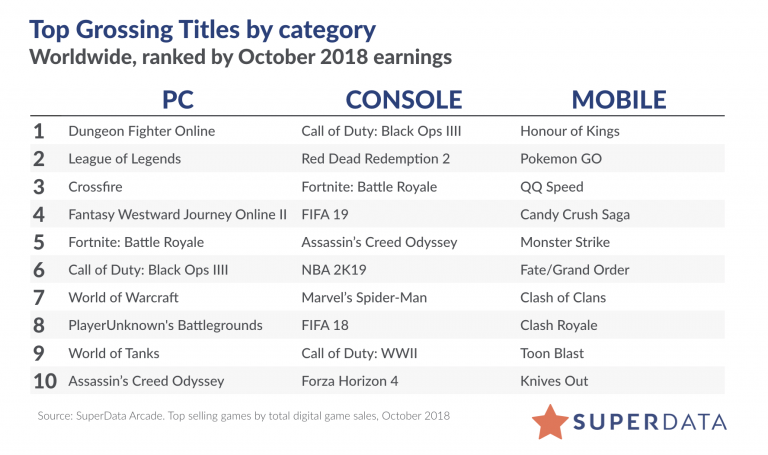 A lot of sports games on console. I didn’t realize they were so big — but it makes sense otherwise EA wouldn’t be coming out with new ones every year. Especially FIFA. And they like to spend money in the cash shop without complaint. What’s the difference between sports gamers and the rest of us? Anyone know about the demographics on that?

Wow, PubG sure has slipped a few places since it overtook LoL.

Whatever the answers may be there should be no doubt that BR is Overwatch’s nemesis. Fortnite has stolen more from OW than any other game including PUBG. How do I know? The simple metric, Twitch streamers. Some get paid, some take on the role of influencers, but on the whole, Fortnite streamers nearly double OW now and most aren’t paid.

Why do they do it? Viewers. People watch and play Fornite.

OW has to do more than intro a new character. They need a game mode to compete with Fortnite.

So, will Blizz cave and give the world an Overwatch Royale version?

Not a chance in Hell, lol.

One thing that makes Blizzard a leader in the industry is that they know their lanes and they tend to stay in them.

They don’t “chase” like most other companies because they just don’t have to.

For the past few years people have been critical about the AC series milling out the same old mechanics and uninspiring storyline. Whatever those changes are, its nice to hear that Assassin’s Creed Odyssey has made some positive adjustments.

My son is loving AC Odyssey. He was telling me how the mobs are harder to kill now and it’s making him think a bit more since he’s a brute-force type of player.

When I’m done RDR2, I’ll be on that next but I don’t want to have to relearn the controls, which is what will happen if I play them both now.

I had fun with Black Flag but Unity bored the hell out of me.. not sure why but probably the storylines between them.

French culture and history is just not that exciting compared to pirates or Greek/Roman mythology to me.

Seriously, it was time for a Western to break up the usual monotony of typical fantasy RPGs. Even if the multiplayer turns out to be garbage, the game still is a 9/10 on what’s been released already.

If RDR2 doesn’t win all the awards this year from writers and critics, this industry is worse off than I realized.

It can’t win “All” the Awards because it’s Not on PC.

It can’t win Miss America either because it’s not a female.
Of course I mean awards it’s “eligible for”. :P

That said, it’ll probably just mean it will win “2019 PC Game of The Year” instead. I see nothing on the horizon to challenge the game between now and then.

I’m mostly surprised it’s only #2 considering how hugely anticipated it was.

I think it’s because Call of Duty has millions of players as a built-in fanbase. Their titles are just as awaited as Fallout, Halo or anything else, which is why it’s probably #1.

Red Dead doesn’t really have a ‘fanbase’ since the games weren’t something made on a regular recurring basis like CoD games are.

LOTRO Legendarium: Why do we know so little about Fate of...