What makes for a really smashing party in an MMO? You can throw all of the prizes, pretend food, and decorations at the wall, but in the end it comes down to the quality of the people that attend. And it looks like many of MOP’s readers have found friends that love a good shindig!

Vincent kicks off this week column with an energetic group shot from a Final Fantasy XIV guild get-together. The colors — they will blind you.

“Any time my free company gets together for an event it does tend to get quite theatrical,” he said. 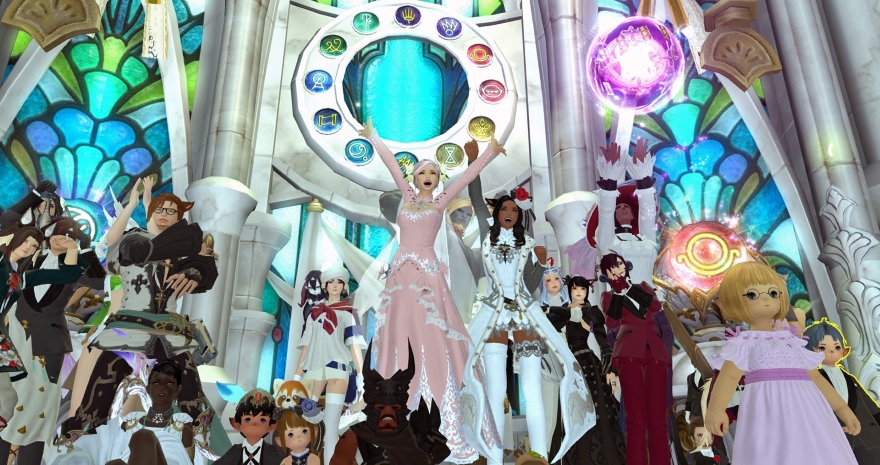 Our own Bree took this picture on a Star Wars Galaxies emulator and had to share it with y’all.

“Here’s a shot from Star Wars Galaxies Legends,” she said. “I was on Endor on my Beast Master, out surveying for a really great iron spot, when my speeder came up over a a cliff and my camera swung under my bike… and up into the sky, where the unfinished second Death Star hangs ominously. It actually startled me — I had forgotten it was up there! Come to think of it, was it up there in the original game, or is this an emulator edition? I dunno, but talk about immersive!” 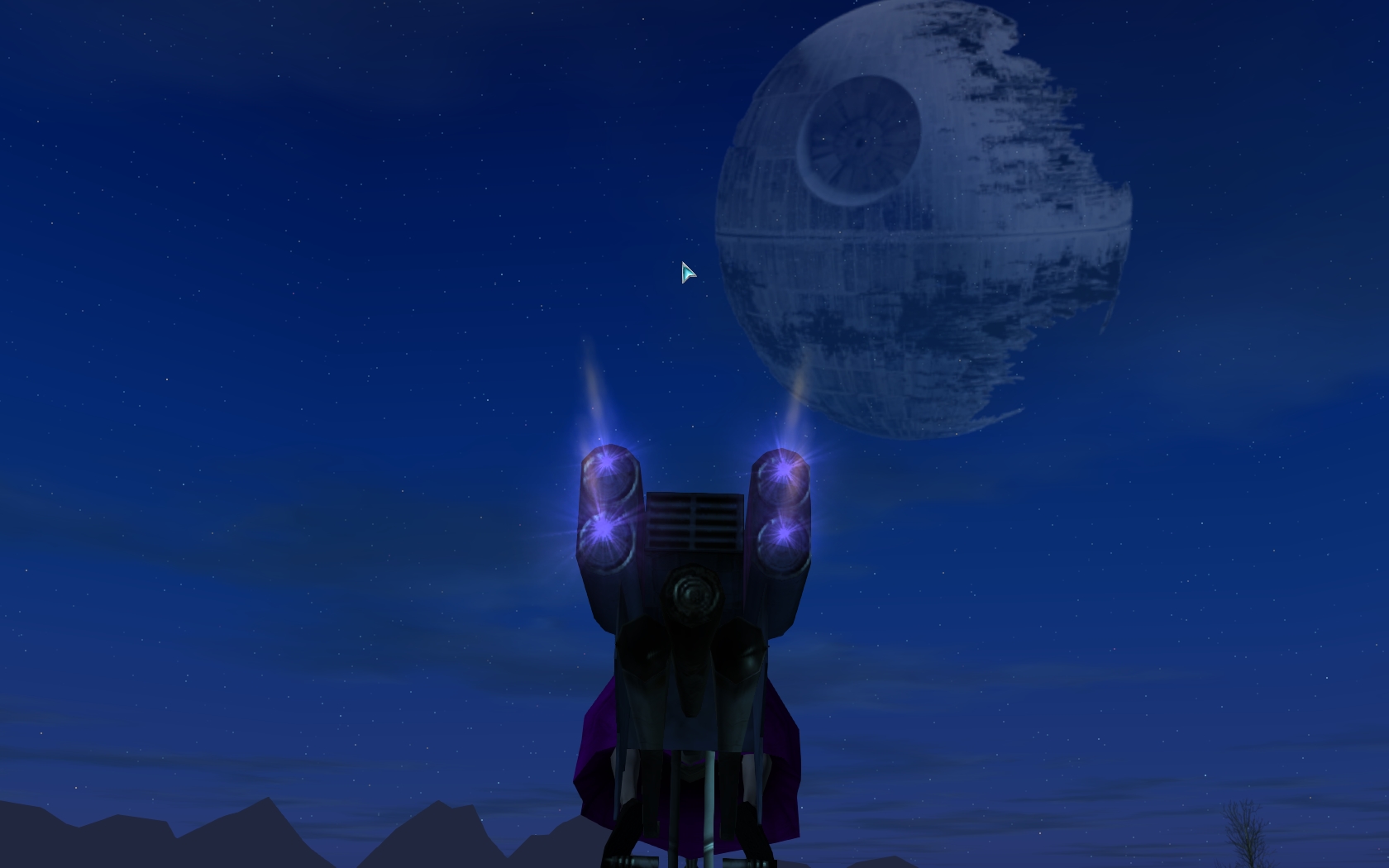 Any time of of those smarmy and arrogant Jedi get a bit of comeuppance is a good day for me. Just because you’ve got nifty superpowers doesn’t mean you’re all that smart or wise, believe me.

Hirku documented this embarrassing scene from SWTOR: “Another promising young Jedi falls to the back side of the Force…” 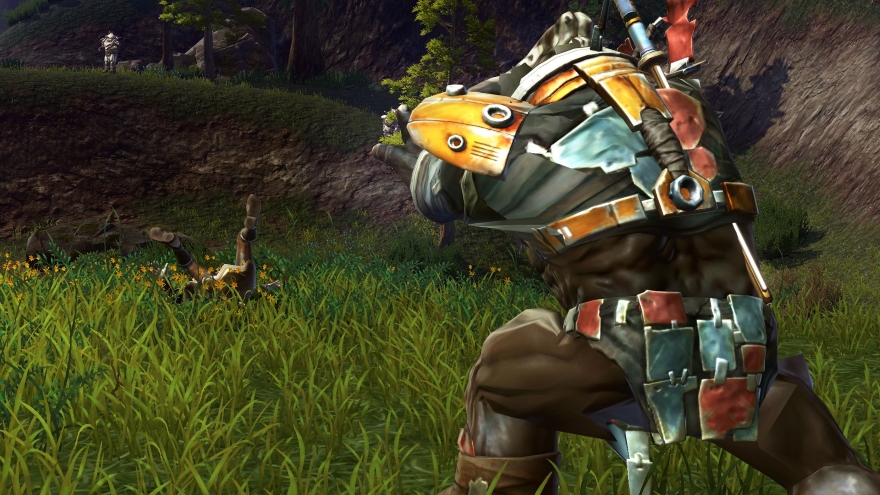 “Through the years, I’ve enjoyed hosting server-wide RP events across the MMOs I’ve played in, although I’ve slowed down over the past few years and now enjoy attending other people’s events,” posted Toy Clown. “This one is from Black Desert where I hosted the Seafarer’s Ball. Here is the ball in full swing!” 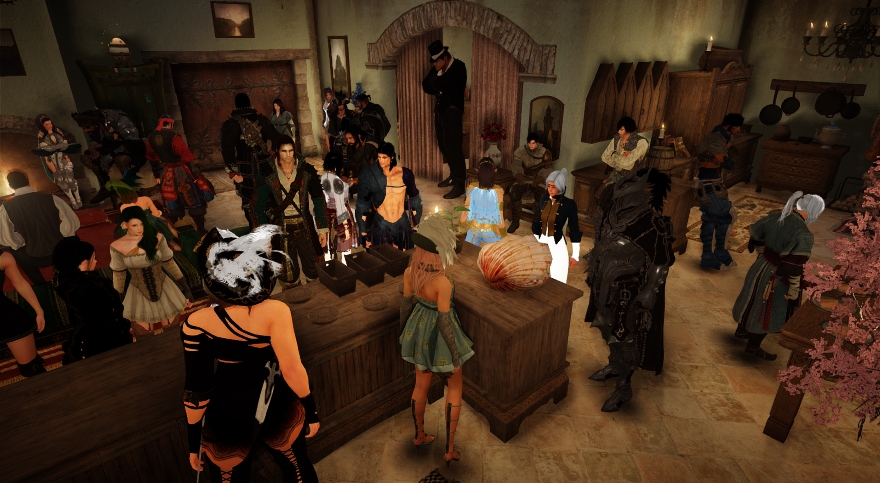 “As an in-game photographer and RPer, I get into a lot of community events for Secret World Legends,” said Hikari. “As official photographer for the World Battle Federation and Happy Tentacle radio, I cover all the fights and as many HTR events as I can. I also cover and/or help organize other events like Cabal Pride (a recruiting event) and Put On Purple 2 (for charity) and DJ shows. LOTS of DJ shows.”

Have to fill up that content drought with some action, right? 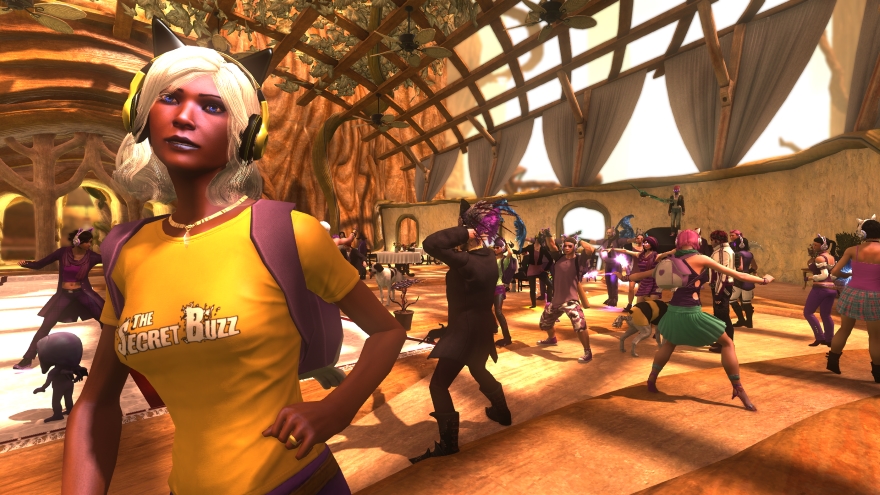 This week’s screenshot challenge is to share with the rest of the class something that surprised you in an MMO. Maybe it was a good surprise, maybe a bad one — but either way, something that you weren’t quite expecting!

My Stable of Javelins.

The end of Guild Wars 2, Season 4, Episode 5.
Because it’s so new (and so shocking) I don’t want to spoil the ending. I’ll just post some shots taken during the episode.

And as I’ve said before, I don’t like posting shots of cut scenes as ‘mine’ because it’s not really my work. It’s another person’s camera angles and renders. But these were some great moments from the episode as well.

something that surprised you in an MMO. Maybe it was a good surprise, maybe a bad one — but either way, something that you weren’t quite expecting!

The scene which begins with this: 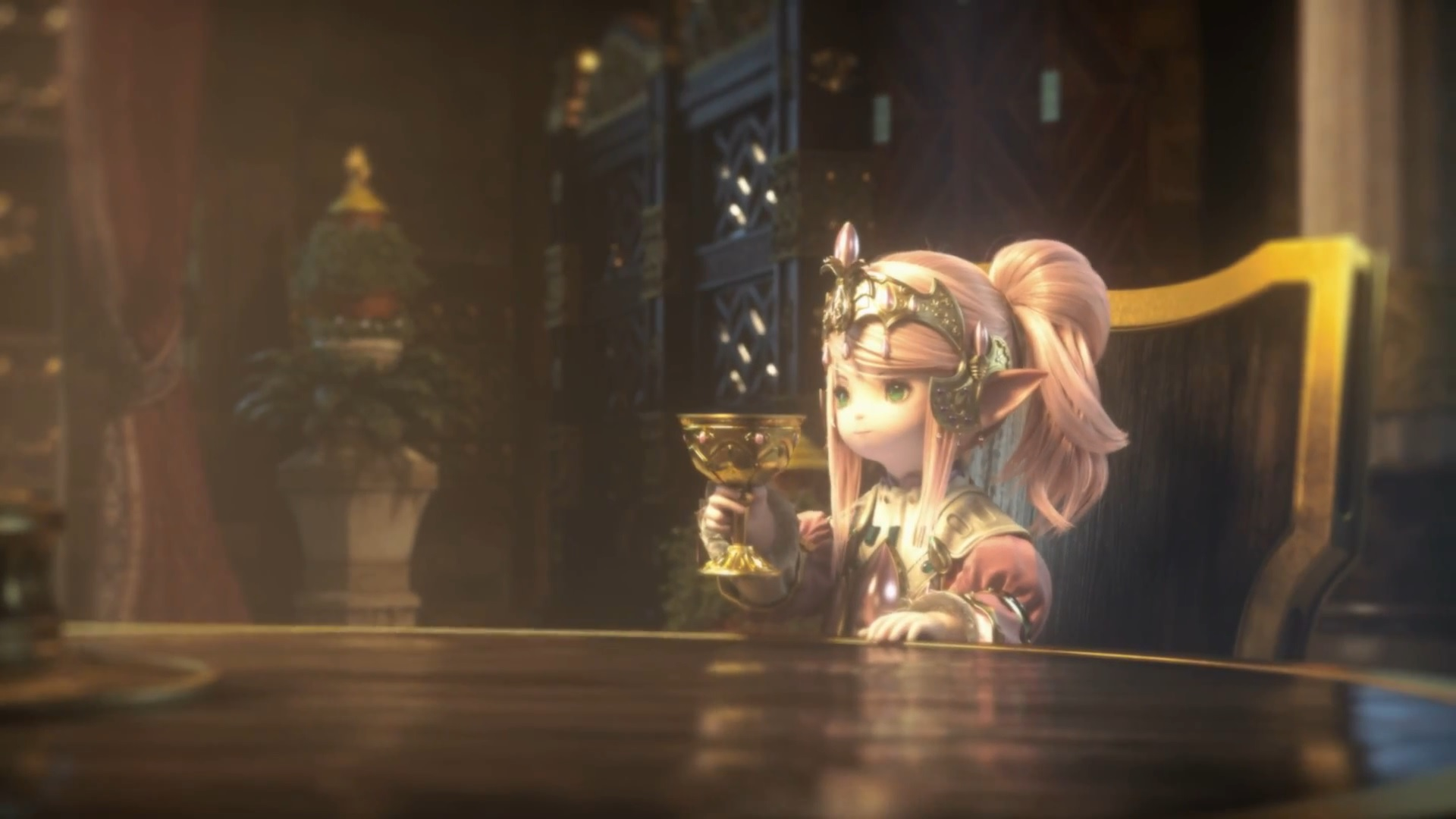 People who played FFXIV, will know exactly why. People who have not played it but don’t mind spoiling a significant part of the story should watch this cutscene, they will understand why I chose it:

Here’s a fun one from the end of Swtor’s beta on Coruscant, when we all got nekkid and danced!

As far as Death Stars go, I long ago modded Skyrim (because that’s half the fun!) to replace the moon with something that’s no moon… (Not an mmo, but I cite the Bree Exception.)

A surprise with class you say? How about a whole Treasure Island’s worth!? o.O

“I command you to change the name of this column to One Shocks, scum.”

job done. time to go home and wash the blood off my hands with some wild turkey and widow.

yes deathstar 2 was in the skybox of endor in the retail game.

i saw a tech blogger expressing surprise the game is a loot shooter. i was like why would you expect other than what they advertised?

Because effort is overrated.

Just finished that raid & back in town: if the feed cuts off after I launch a new Expedition, it’s because I got hit with a 95% loading bug (again) and had to reset the client.

thing is these guys used to be the best tech bloggers in the business before they followed the trend of video format reviews of products that have no business being reviewed in video format a la LTT. and focusing more heavily on phone reviews of all things.

i guess it’s not the most confused perception i’ve seen of the game. there was some guy on some random article on here the other day arguing (seriously arguing) it was gonna be far more like firefall than destiny 2 in terms of being open world and sandboxy and such.

looks like you’re having fun tho. which is good stuff. i think i’ll pass on it as doesn’t seem enough interest amongst my crew and we’re all penny pinching in the aftermath of xmas and ahead of game releases with wider interest in the community.

If I had to give it a general comparison: the game is like if you put the Division’s over all model in Firefall’s world.

… And minus the thumper.

firefall was open world tho? and not a loot shooter? and a quest grinder even when the quests were just dailies?

as best i could tell from teh alpha weekend anthem is if not totally heavily instanced still less about as open world as destiny 2 which basically isn’t.

do you mean the lore/aesthetic it’s similar? in terms of the genres they were quite completely different to me to teh point of finding the comparison completely surprising and strange, other than they are both powers shooters with jetpacks (which jetpacks and power shooters was popular trend at the time firefall was a biggish thing?)

i just fail to see comparisons beyond the immidiate surface qualities of tps with jetpacks. firefall was open world sandypark that made an attempt at mmorpg economy.

anthem takes place in large rooms connected by corridors that altogether are behind loading screens from hubs and is entirely a loot shooter.

Thats why I said “The Division” in “Firefall’s World” …

The free roam mode is very open (or it will be in the full game) & while it doesn’t cover as much square milage as The Division; it probably has a compaireable volume of space due to the vertical design to accommodate the flight system.

… No, it isn’t a MMO, but it is a pretty damn good loot shooter.

Yup. I spent a lot of time in free roam or what they call freeplay mode. It is wide open and you can get into just about any type of trouble that you would like.

I think I enjoyed it more than the missions.

I just wish it was easier to find world events, and TBH I kinda liked some of the missions & wish they let us rerun them on higher difficulty settings.

The Stronghold was a balst once I got used to it … Then I ran it enough that it got old.

Ah, yes. That would be nice. It could be just a simple waypoint appearing on your HUD that indicates there is a World Event and where.

I liked the missions in the demo. They were just a sample. What I liked about freeplay mode though is I could just go where I wanted.

And I went spelunking. Heh. Found some good fights and some good loot. Not great loot, but good enough to make it worthwhile.

Freeplay was a total surprise for me. Play a few missions, then go freeplay to explore and relax. Yup. Yup. All good!

I’ve gotten addicted to the weapon mastery challenges & keep farming the caves to unlock all the blueprints I can.

… Probably should checkout hard mode before the trial is over.

I don’t know how I did it, but I just unlocked all 4 suits … Could be a glitch or something, but I completed a hard mission that I dropped into & then then next time I opened the forge I had the unlock screen up with 3 more unlock tokens.

Holy Yoda! Yup. Same for me. I think they just unlocked them all as this is the last night for the demo. Nice!

The interceptor is like a super mobile Ranger, but without the firepower, and the Storm is kinda cheap with how you can pretty much stay airborne forever.

Colossus is still my favorite.

*edit* they probably did this because so many people couldn’t get in / couldn’t get their friend codes out in time.

LoL, game crashed on me.

WoW, that was 2 hours? I knew I had been playing for a while, but it didn’t feel that long.

I love it when games don’t take themselves seriously, a little bit of goofy does not harm, a shady NPC asked me to join a competition, i didn’t know what i agreed on, seconds later i’m dancing for chickens!

Wasn’t there a chicken quest like this in LoTRO? I seemed to remember getting all caught up in that too without realizing WTF I getting into. o.O