No lie, when I had pulled up this screenshot from reader Vincent, I happened to be listening to “Big Ape City” from Donkey Kong Land. That seals it: Today is going to be nothing but apes, all the way down. I’m fine with that.

I’m also fine with everyone taking a break from killing the local wildlife and just hanging out together. “My favorite social gathering spot is Fanow in the Rak’tika Greatwood in FFXIV,” Vincent said. “Side note: We all have that special friend who insists on being a bit…extra.” 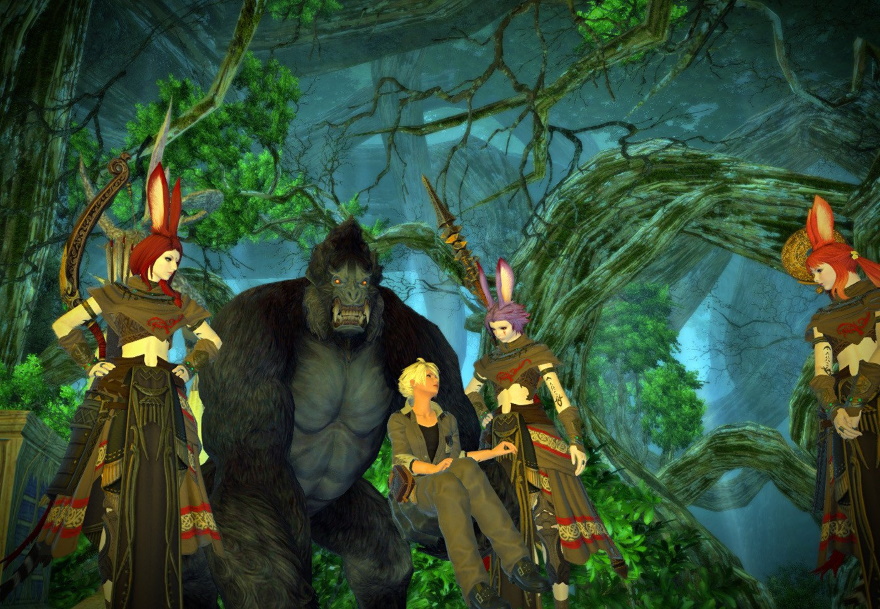 Frank will go to great lengths to clear out a pub for friends and cohorts: “We may or may not have killed some Grim Guzzler patrons to enjoy a bit of ‘camping’ in World of Warcraft.” 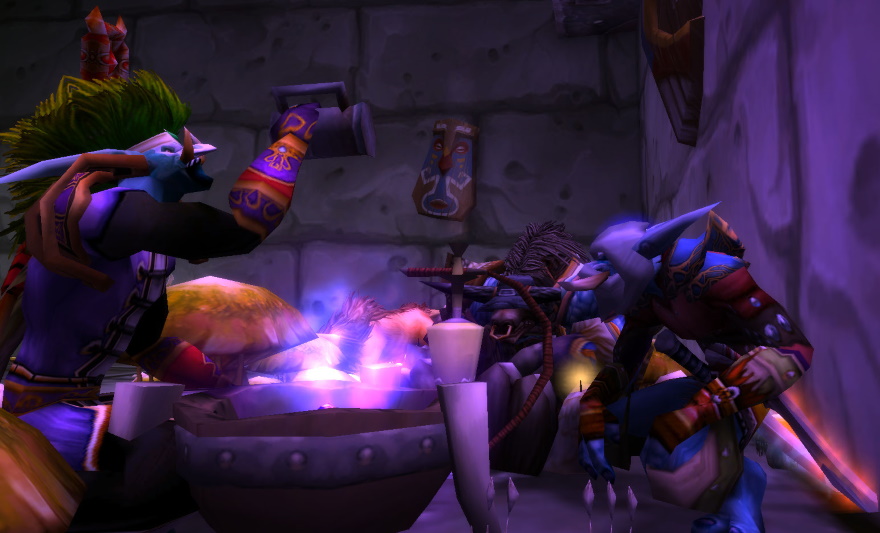 And is there any MMORPG hangout spot more iconic than Atlas Plaza in City of Heroes? I’m still waiting for a Marvel or Justice League movie where all of the superheroes line up for a costume contest while letting crime run rampant all around them.

At least Skoryy, Avenger of the Night, has priorities set straight. 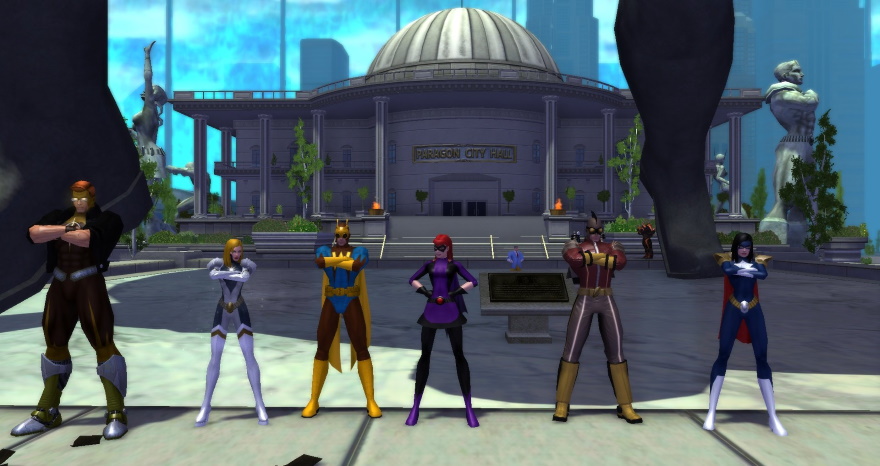 Hikari takes downtime very seriously: “A handful of people meeting up anywhere in Secret World is grounds for a party. We’ll forego the usual grousing about losing many of the great places we used to gather for parties due to zone caps and show off some of the fun places that remain in SWL. The Albion is another great place to hang out and throw a party, though lighting there can also be problematic. In short, all of Secret World is a great place to gather, relax with old friends, and meet some new ones.” 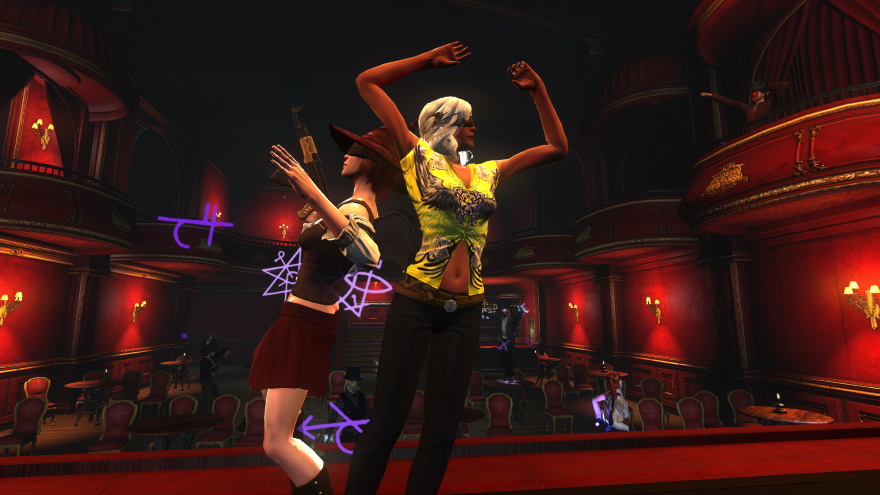 But if the /sit emote is more your style, then pull up a chair and hang out with Rafael in Elder Scrolls Online.

“This picture nothing special but I do love hanging out in the Rosy Lion in Daggerfall,” said Rafael. “Stay there long enough and an adventure will follow. What does that mean? Well, for one, marks are easy to come by and two, well let’s just say it is profitable, OK?” 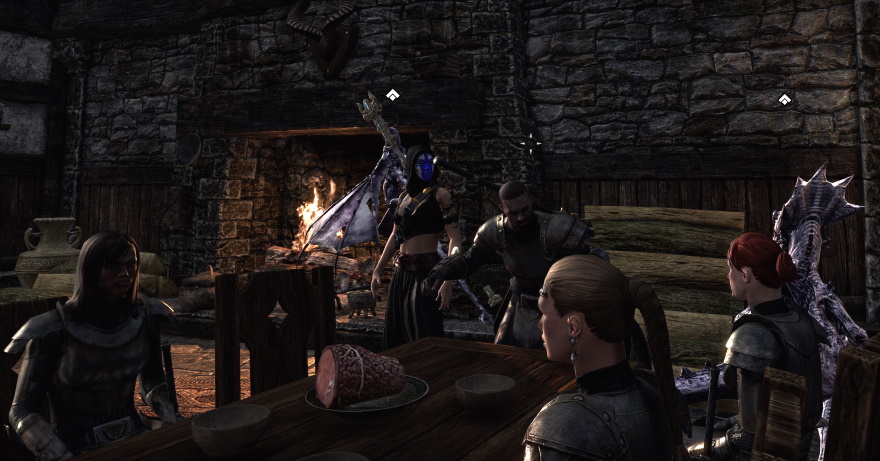 For this week’s screenshot challenge, we want to see some bloodthirsty, no-holds-barred combat… against a completely weak and pathetic foe! Take a picture of your character whaling away on a vastly inferior opponent and then post it so you can be ashamed for all time!

I don’t think of it so much as “whaling away on an inferior opponent” as “defending the weak with my well-earned might.” :)

Case in point – the Lynch Family Farm – a farm of decent, hardworking people who collect honey near Heidel is plagued by any number of evils. Among them, the dreaded Kuku Bird. What is to be done? Well, Danyica, a local Mystic of note is not too proud to defend these humble folk, from this less-than-ferocious foe.

Before, and after. Farm saved, honey for everyone!

The Kuku, the most annoying of foes.

— Princess Leia Organa of Alderaan, apparently using her latent Force powers to provide a caption for these Star Wars: The Old Republic screenshots.

At first, the newly-returned companion, Jedi Knight Kira Carsen, was none too happy that one of the first places my character took her was a farm planet. Yes, the expression on her face says, “Don’t tell me that smell is what I think it is!”

Eventually, the two Jedi resolved their differences with a dance (or would that be a hoedown on Dantooine?) while a bemused kath hound looked on …

(I’m not that good with in-combat screenies.)

PS: And no, I couldn’t whale upon those…even if I tried. o.O

@Justin, thanks for the feature! :)

Hey! Thanks for the shout out last week. I am enjoying my time in ESO although I think it may end soon.

As for this week? Let’s stay with ESO.

So, a weak little Spriggan, which is nothing more than a walking tree branch, approached my Sorc with bad intentions and, well, it became driftwood in the sea of dark magic. Poor little thing won’t even be used for kindling now.

I’ll be back this week. Tomorrow night late and Tuesday night late. :) I’m central so I will be on around 11 pm my time. I’ll look for you.

*The pigtails suddenly perk up excitedly and start to wag…*

Fight? But I wanna rock!

Very well, nothing can face the might of the vicious attack kitties when they band with the mighty Jackalope! (ExtraLife Combat Transformation in GW2)

These pictures aren’t really great, but they are cute. Did I mention they can fly?

Every opponent is inferior to Talyia and Hikari so we’ll throw a few shots in there.

And that’s cool and all but.. I wanna rock!

And I’m glad you picked that picture, cause I was pretty sure that was the one that was going to catch your eye. Heh.

I got nothing on-topic this week but I wanted to share a double-wtf moment from my first hour of Diablo III when I opened my inventory twice just a few minutes apart. I can’t decide if I should call an exorcist or start buying lottery tickets.

Massively OP Podcast Episode 339: Kitchen sinks and the Tao of...

Albion Online’s Call to Arms 10 arrives ahead of this weekend’s...

EverQuest II brings back its (renamed) summer event and kicks off...