Here we are on the cusp of the end to another year: 2021 is almost completely in the rear-view mirror. As I look back on the year, I can’t help but think about the great many PvP games I’ve played and discussed with you all. They have all been multiplayer, no doubt, and arguably massive as well. However, they have not all been RPGs – at least not in the strictest sense.

In fact, many of the games I’ve written about were battle royales, arena battlers, and their ilk. They’re games that share a lot in common with our MMOs but that often miss out on one of the key elements that we enjoy so much: a living, virtual world.

Now I’m not suggesting we’re about to see the end of MMOs at all. However, maybe we are near the end of large group PvP-first MMOs, at least for a while. So let’s return those pitchforks to the barn (and party hats to the cupboard for the many of you who loathe PvP) and hear me out for a moment. I know we can find a bunch of PvP games that are still in development or even some ancient ones that continue to run. But developers need to consider that PvP can be for everyone, not simply the players who want to be in massive groups.

Some PvP-first games were released – but not as expected

At least in our corner of the gaming world, we had a few games launch that we’d been anticipating for years, the two that got the most of my attention being Crowfall and New World. Neither of these games launched at all in the way I was expecting. 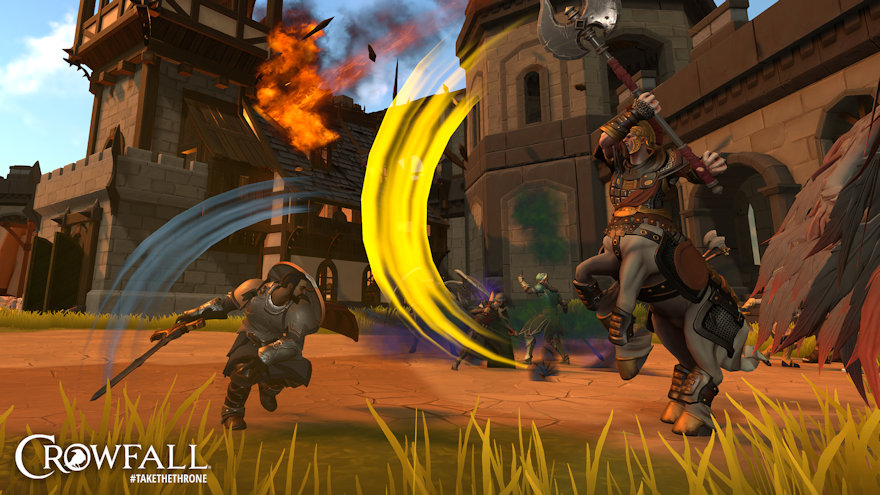 When Crowfall was initially announced, I couldn’t get enough news to satiate me. Every bit and scrap of info had me on the edge of my seat. I could not wait to get into that world and play until my eyes bled. After I finally had some time in-game, I was able to see that it might not hit all the high-highs that I had wanted, in spite of the fact that over the last year, the game really did come along nicely. Features fell into place, and the ability to actually the play the game as it was envisioned came closer and closer into reality.

Something was missing, though. The game launched, sadly, with a bit of a whimper. All the players who had seemingly backed the game and encouraged its development simply didn’t return en masse to play at launch. I thought there were enough players for PvP fans to enjoy their time playing, but it just didn’t get that huge surge of launch hype. The fact that Crowfall is now changing hands to a new owner isn’t the most encouraging state for the game, even if I’m still hoping for the best.

New World, on the other hand, had a massive launch. I literally held out on buying the game until a few days before launch when I could no longer bear all the hype I was feeling around it. Yet even though it was originally designed as a PvP-first MMO, much of its success was likely due to the turn around from a PvP-only game to a more PvE-friendly game with PvP endgame content. New World ultimately succeeded because it pivoted away from that hardcore PvP direction.

In fact, in the entirety of my time in game so far, I have only participated in PvE gameplay. I believe I had a single PvP encounter when I was around level 10 in the starter zones completing some quests when a level 40 or so player rolled me and my friend. Naturally, we were trying to complete quests, so we simply disabled our PvP flags and continued about our gaming in peace. It’s one thing to play flagged PvP and engage in some meaningful PvP against others on a similar playing field. But when you’re simply that far outranked in power, it’s not a fair fight, and it’s not fun.

For me, one of the major letdowns in PvP-oriented games and gameplay these days is the single, unfiltered focus on large-group PvP content. Believe it or not, there is a ton of great, meaningful and memorable PvP combat that doesn’t focus on large armies clashing (and rubber banding) around a map.

I think I finally realized it’s because PvP designers are falling into the same trap that many endgame PvE designers have fallen into: that large-scale group content is the only content that matters. In other words, raids are the be-all and end-all, only in PvP games you aren’t fighting some intricately designed AI encounter; instead you’re trying to take over a castle from other players.

You know, PvP MMOs weren’t always solely focused on that kind of combat. One thing I loved about past PvP games was all the options I had available to me. The original Guild Wars didn’t even have large group PvP, not at the scale of what we’d consider large group PvP now. It did offer some PvP content to leveling players, which not a lot of games think to include anymore. Each city had its own arena that capped out players levels. This gave me the chance to play in the PvP arenas, with my PvE character, without being too significantly overpowered or underpowered.

For all its faults, Warhammer Online actually did a pretty great job of enabling PvP for players, even those who hadn’t reached the endgame. I recall the various zones had an RvR enabled area between the factions that players could compete over. While the zones did enable larger groups the ability to control the keeps, I have some wonderful memories of grouping with random players nearby, forming a warband, and eventually assaulting the keep. The parties could form organically, but the game didn’t force you to do so.

Are battle royales and small arena games the future for PvP content?

As I look back, I see that I’ve played dozens of small group PvP games, but most of those games were BRs or some form of arena game. It’s easy to say that they’re simply following the masses and leeching off the popularity of Fortnite and similar titles, and they certainly are doing that no question. However, I think there’s more to it.

I think players on a whole enjoy the fast-paced action that can be delivered in BRs. But MMOs always get pushback when they focus too heavily on endgame raiding, and now we’re essentially seeing that same pushback on big-scale PvP endgames – it’s just less direct. Instead, the players are simply moving to where they can get the content they want.

That doesn’t mean I don’t enjoy the large-form PvP fights now and then. But I think modern developers may be realizing all over again that focusing their whole game on a niche of a niche can’t be sustainable, whether it’s PvE or PvP. There needs to be more content. The content doesn’t have to be PvE as New World implemented. It just needs more depth and options than gank-or-be-ganked or my-zerg-vs.-yours.