This article is part three of a four-piece series on safety in Pokemon Go as well as other Niantic games. You can read all four pieces right here.
In the first two parts of this three-part series on stalking and harassment in Pokemon Go, I discussed how I’ve been struggling with a Pokemon GO stalker for several months. Niantic’s support is somewhat understandably unable to help players in need in real-time, but I’ve found that it also ignores lessons learned in its past games that would help it design apps that aren’t easily abused for stalking. Worse, in my experience, the team either is ignorant or dishonest about the very few options it gives players to deal with these issues.

POGO support also lack any useful safety advice or de-escalation measures once problems occur, instead trying to pawn off the entire situation on local law enforcement, which understandably has little to no knowledge of how location-based games, especially produced by Niantic, can be used to harm the physical and mental well-being of people in the real world. But Niantic has actually been doing worse: failing to enforce measures bolded on its own support page.

Changing the rules to prevent a loss

Before we finish this series, I want to reiterate Raph Koster’s history lesson about gang violence forming around MMOs, which the people who built Pokemon Go and Ingress knew about but didn’t heed, resulting in player deaths:

You’re the client, and there’s no PK switch in real life. In Ultima Online circa 1998, when we were available in Hong Kong, we suffered through the problem of actual real life triad gangs forming guilds and engaging in PK wars. Then they took those fights to the real life streets. Far as I know, Pokémon GO doesn’t have a “call the admins, uh, I mean police” panic button. Make no mistake: by creating teams at all, this game has put in place at least a little context encouraging players to aggress one another. The developers only hope that it only happens via game-sanctioned means.

It can be overwhelming once you start interacting with Niantic’s customer support for stalking and/or harassment. It’s quite different from what we deal with in MMOs, and Niantic support’s general attitude gives a very strong impression that the company either doesn’t care or doesn’t understand how serious these issues are. I’ve personally seen other companies, even Blizzard, do much more when meatspace was affected by virtual space. Niantic’s disinterest in helping its affected players and customers and community members is underwhelming at best.

But not only are the support reps I’ve dealt with uncaring, they’re woefully inept. Navigating the help section prior to speaking to support reps (or by them) often pushes you to the company’s support pages, like the one below, which promises a name revert feature that apparently is in error, is outdated, or won’t be enforced, as I soon learned.

Because of the company’s insistence that I follow the support page’s advice, I took a name change with very specific limitations. I went through several steps of preparation before changing my name, then followed new rules afterward. A single slip-up – being spotted by my anonymous stalker in the real-world interacting with a gym – ended all that. From then on, in response to my requests, Niantic support changed my name while I was out in public playing without notice, repeatedly, so that everyone around could see it – which now encourages my stalker to hunt for me at least three times a day. As the name changes and Niantic’s non-efforts to keep me safe from this stalker utterly failed, I decided to just reclaim my original name in hopes of having the stalker only target me instead of the rest of my community.

Unfortunately, that hasn’t been possible. Despite the bolded text proclamation on the support website, Niantic support has repeatedly refused to revert my name. Either through ignorance or deception, support have ignored the history of my situation and the history of my interactions with the team – at one point, a rep even tried to place the blame on me.

But not every case is like mine, and apparently name reverts are possible. I learned through the community that a fellow stalking victim had not only received a name revert but multiple reinstatements over months and weeks, as it was tied to an issue with the uncommon nature of a particular stalker. The name reverts were not immediate; they came after months of the victim personally contacting developers until someone at Niantic did something.

Kudos to “Botticelli” for helping that player out, but I cannot imagine managing a live game whose support is so bad that a very clear case of stalking couldn’t be escalated by the entry-level staff, causing a customer to skip the entire department leadership structure to beg devs to get them an advertised solution. 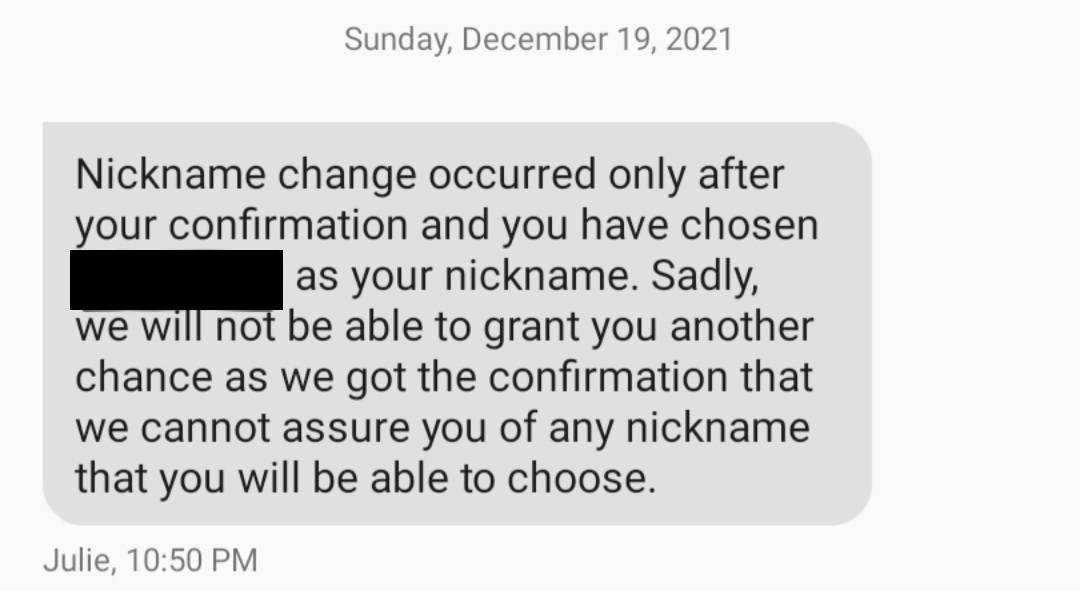 This may be why Niantic abruptly removed the support website’s text about name reversions after I pointed out on social media that the company was falsely offering the changes that support staff had been refusing to execute or escalate. As Niantic has failed to respond to my inquiries publicly or privately, I can only assume that the stealth change is supposed to be for legal reasons, though doing it after attempting to blame me for accepting a name change is embarrassingly shady. And that’s before adding the fact that Niantic forced the change during a major event, Community Day, without a warning, and then placed the blame about 10 hours after the fact.

It also must be mentioned that this is not the only time or case of Niantic customer support refusing service. When raiding first came out, Niantic representatives spoke about contacting them via a now-discontinued form which included loss of raid passes. However, players received refusals about their requests, even when pass loss was due to a glitch, though it was a known secret that repeated ticket submissions would eventually lead to someone executing the order. And that’s with a basic gameplay feature that has no connection to player security or privacy.

The absolute apathy in terms of customer care and respect from Niantic on a basic level is embarrassing. If it gave players a consistent caseworker or escalated situations of serial harassment/stalking in its games to a department that’s knowledgeable about these issues, maybe some problems could actually be resolved without players needing to resort to sharing Niantic developers’ email addresses in private just for the chance of seeing some progress or relief.

However, to this day, each support ticket I submit means I have to explain everything all over again. Only addressing the previous message often ended my ticket because support staff addressed only a single aspect of my request, wholly ignoring not just the history of my interactions with them but more importantly the fact that the entire situation stems from one of Niantic’s players using Niantic’s game to intimidate a Niantic customer.

Customer service is a thankless job, and I understand that they’re in a hurry to make it through a queue. But a multi-month stalking situation that involves law enforcement should go to a specialist, and that’s on Niantic. The gaps in communication between not just me and Niantic but also between Niantic employees has made this the absolute worst game of telephone I’ve ever played.

While I applaud Niantic’s attempts to get gamers back into the real world, I wish it would show more concern for player safety beyond passive tips on loading screens. I’ve made some new friends because of these games, but I’ve also been just close enough to a murder, a shooting, and two car thefts for people to worry about me. I physically steer fellow players through parking lots and hiking trails to get them to areas they safely can stand in. I’ve seen people shorter than me bump their heads on tree branches or run into poles.

Going out into the world is important, but a game shouldn’t become the tether that can draw the danger to you. Making not one, not two, but three games that facilitate real-life stalking is embarrassing, and it’s a damn shame that there are no other strong contenders in the ARG department beyond Niantic. I would love to see the company show some empathy towards the many victims of harassment in its games, but at the end of the day, I play Niantic games not for the company but despite it.

1/14/2022: After well over a month of virtual telephone both in-app and via e-mail, Tweets containing evidence of support site nerfing, talking to other stalking victims who fought for advertised services including name reverts, these articles, and a Better Business Bureau complaint filing, Niantic finally honored their pre-nerf website agreement and restored my username. While I’m grateful for that, I would suggest against the assumption that Niantic support is capable of executing their jobs without a similar campaign, let alone serious issues like my ongoing stalking issue.