Do you ever stop to realize just how much weirdness we see and dismiss every day as MMO gamers? If a fraction of the sights we witness in-game happened in real life, we’d be YouTubing and tweeting that crap in hopes to get it viral.

Take our first player screenshot this week as an example. Here’s a confluence of bizarre sights that nobody’s going to even pause to gawk at in EverQuest II. Reader Becca puts together a string of ridiculous words to describe what we’re seeing: “Here is Dark Elf leprechaun and Brewday fan Riaak tipping his hat while his raptor looks a bit embarrassed to be caught with such a weird passenger. You can’t see it, but he also has a giant spoon on his back.”

Because spoon, that’s why. Don’t worry about the rest of this column; there’s nothing to see here, so move along! Trust me. 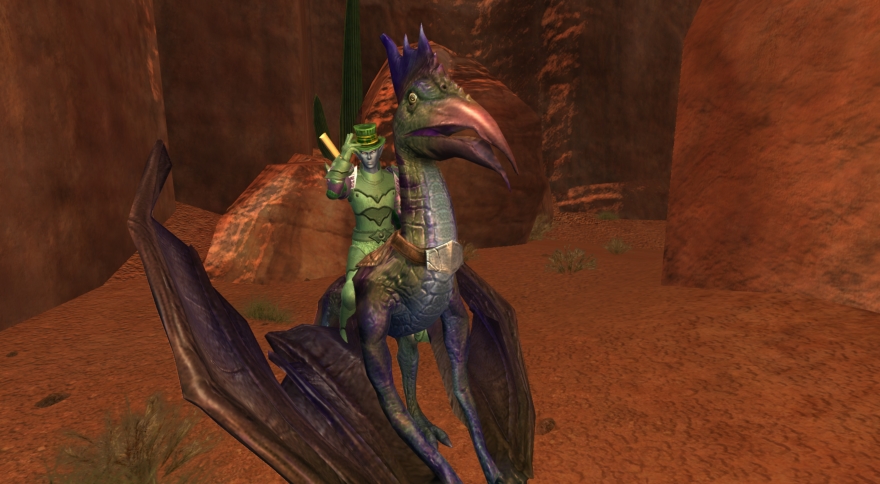 Nothing like a good bit of lens flare to make your character appear 55% more heroic and photogenic, eh? That’s a good photography tip from reader K05h3lk1n, who sent in this Age of Wulin screenie.

“Here is a screen capture of my friend enjoying the scenery in Jiming Posthouse,” he writes. “I can’t explain it, but this game captured me from its first moments. Even though it can be very time-consuming and expensive, I still consider it as one of the most original MMOs and the best sandbox on the market. I’m there for the long run. We got another influx of American players, too, as Snail Games is seemingly unable to adjust its business culture to the western market.” 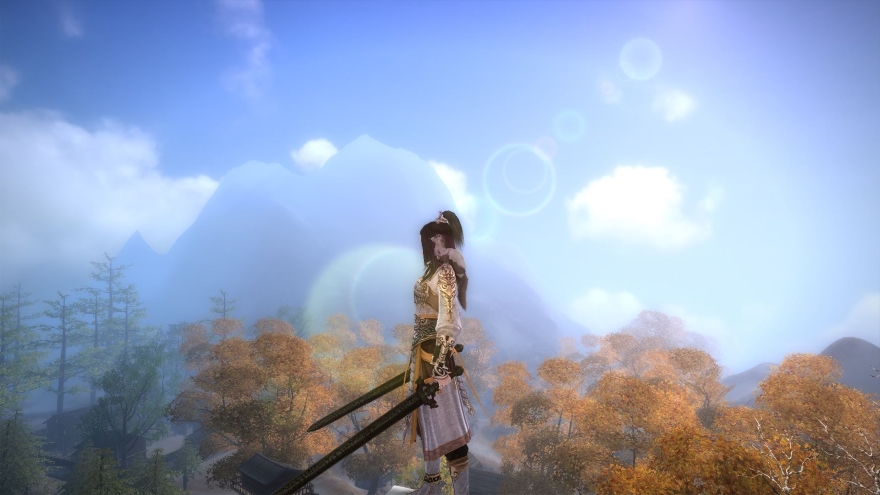 I’m glad reader Matt sent in this particular Guild Wars 2 picture because I know full well the house he’s describing. I screenshotted the heck out of it when I found it way back when, too. Matt had a really good thought that went with this particular tableau.

“I found this house near a renown heart in Gendarran Fields,” he said. “As I was cleaning up dirt downstairs (yes, I get experience for cleaning up a ‘missed spot’), I thought to myself how great it would be if there was player housing in GW2. This downstairs room is a perfect example of what it could look like. I think it’d be awesome and a ton of fun (if implemented right).” 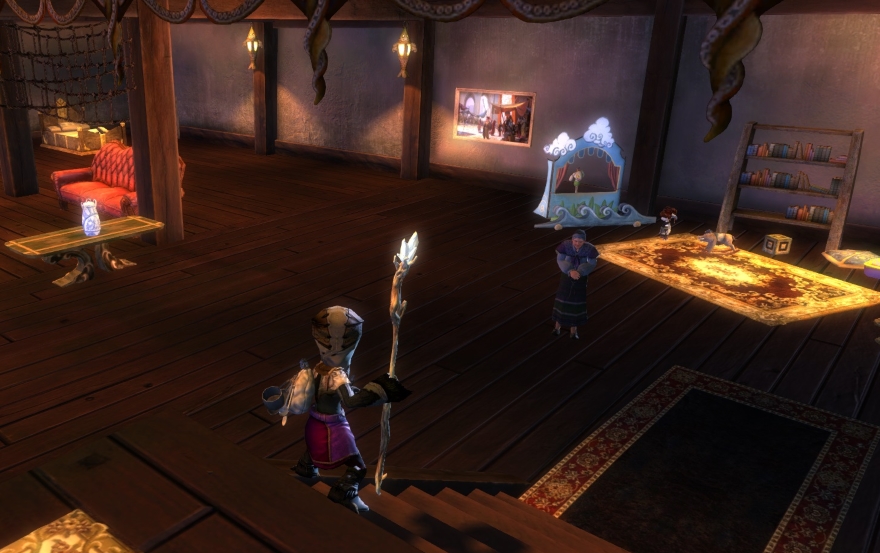 One of the joys of doing this column is hearing you all gush about your favorite MMOs as you show them off. There’s so much negativity sometimes that it’s refreshing to have a space where liking a game is welcome.

So here’s Ghostmourn’s RIFT testimony: “​I’ve always loved Bard/Rogue classes and RIFT is such a great game. I thought a musical skill was cool and a little different, so here is my Bard playing a truly dashing melody and casting Virtuoso. This skill is described as ‘a moment of musical brilliance.’ Monsters far and wide across Telara fear nothing more than the sight of my hooded rogue wielding a.. well, a clarinet apparently.” 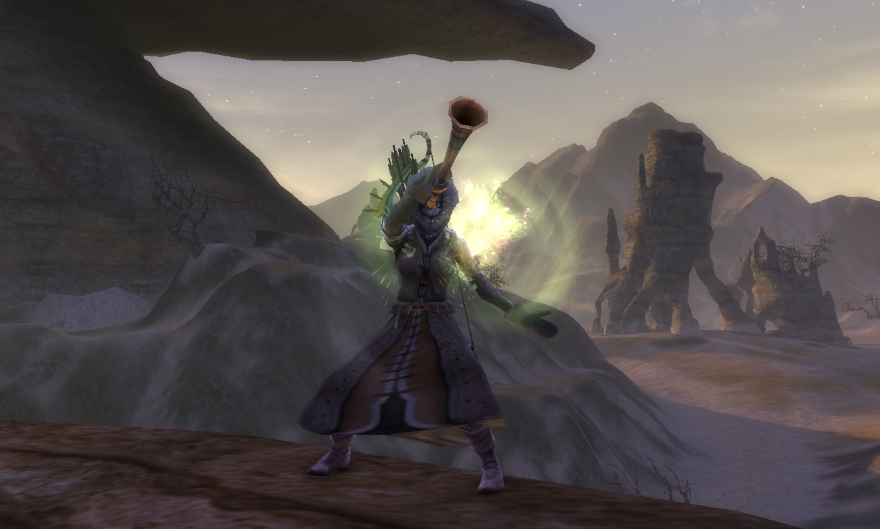 A couple of weeks ago I asked readers to submit their most interesting death pics from in-game. This “/afk check” by eLdritchMD from Dark Age of Camelot amused me greatly. So, presenting this week’s It Came from the Comments Section! pick: 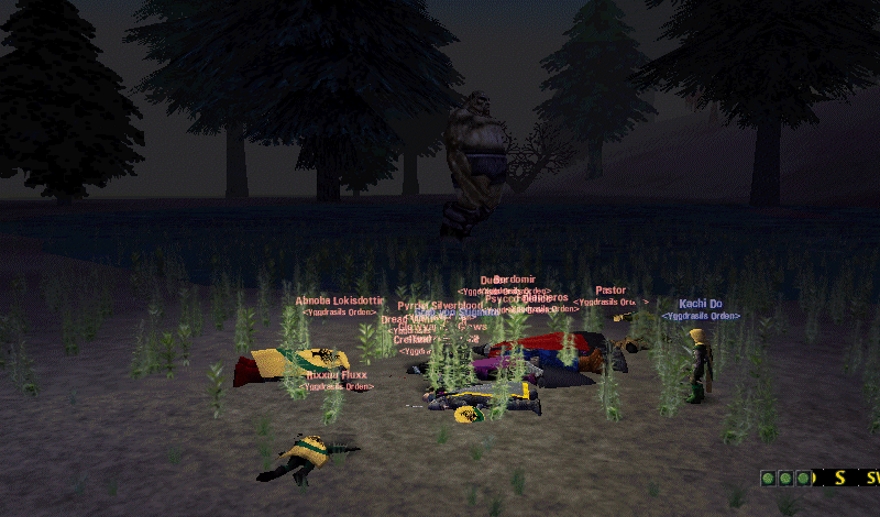 Before I take my leave of you, I must issue the weekly screenshot challenge. This week, I want to see pictures of your favorite… maps! Yeah, maps can be really cool pieces of in-game art, so why not immortalize them in this column?

Liandreth dirtyklingon If you have a group of friends it’s super fun. It starts off kind of slow just questing and figuring out how it all works. Once you start to get a feel for how you like to play and everyone has their build the combat is very addictive.

I wasn’t too sure about getting it, but it’s one of the best “goof off” type games I’ve played in a while. I’m not sure I’d love it playing solo though.

Koshelkin
I feel like there’s a message to this reply post which I’m not seeing. Anybody want to tip me off? Am I simply supposed to put money in the meter? :-)

I dunno.. I couldn’t think of anything appropriate… don’t judge me it’s 2 am :P

dirtyklingon
Reminds of those street signs in New York: “Don’t Even Think Of Parking Here” :-)

My alter-ego in The Secret World. He looks far more aggressive and scowlish here than he normally does, but Translyvania does that to everyone, I expect.
If he does look at all omninous here, you can see that his Egyptian Temple Cat, Isis, remains thoroughly unimpressed, as she always does.
I’m not usually a “pet person” at all in MMORPGs, but I found myself playing solo a lot, late at night, bleary from my chronic insomnia.
In this reduced state, I found that the creepier aspects of the game would often “get inside my head” under these conditions, and make me jumpy — so I recruited Isis to come along (she drove a hard bargain) so that I wouldn’t feel so completely alone when treading the dark and desecrated corners of the Earth.
Some hero I turned out to be. :-)

The clothing reflects my own tastes (I like jackets a lot, for some reason, and prefer black jeans), but I added the incredibly cheerful blue t-shirt ™ so that I didn’t look like yet another wannabe badass in an MMORPG (see “scared so takes his cat along”, above).

The nickel-plated .45s and the sword as a backup were how I always envisioned the character, and I’m still pleased that I could have those in TSW (both in terms of abilities, and weapon castings, to retain the look as I progress).

I work for Dragon. They’re weird, and sometimes troubling, but I have a lot of leeway in doing the job. If I defy them, they chide me absent-mindedly, and return to their mathematical projections.

I caught a whiff of fascism lurking in the Templar’s shadow, and couldn’t go there, and the Illuminati, well, my hopes for the fate of the world are a little more … complex.

Hope you’re all having fun with TSW, and if you haven’t tried it yet, jump on in and have a look!
Apologies for the length. Thank you to anyone who actually read all this.

dirtyklingon My friend wants us to get into Windward. I don’t know though. How are you finding it?

First shot is of me and hubs in TERA, which we’re playing again. Second shot is my character from BnS when I played the Chinese version. My youngest daughter picked my cat and named him.

Already knew where in Gendarren Fields that house was without searching.  At first I thought they made a mistake and it was in Queensdale next to Caudicus’ Manor, strictly because there is also a similar puppet show in a house amongst the circus folk there.  But the molding architecture gives it away as that of a lake-side pirate hotel on the far Eastern part of Gendarren.   Beautiful place to visit, even if there’s always some sort of troubling events happening there. (Look to screen #5)

Got to do some WvW by moonlight.  There are some spectacular vista areas and I might as well take as many screens as possible while it still exists in its current state.  Even though they say the Borderlands will return some time after HoT as a “rotation”, they still might overhaul it to match the new design of the Dessert map.

So I found this glowing orb.  Isn’t it nice? Twice the size of my head!  When I turned it in to this forge master guy he gave me a hammer. And the hammer turned me into a Koden. “What’s up with that?”  Oh man if only they could become a playable race (the animations and emotes are all already therefor them too).

And finally there’s a map of Lion’s Arch. Too lazy to email it, sorry.

The mount in the EQ2 shot looks cool – nice to see some variation in mounts!
(And I’m looking forward to motorbikes in TSW! Maybe segways, rollerblades/skates, skateboards as well!)

Loving the view in the Age of Wulin/Wushu submission – I only played the game briefly but found it very picturesque. The open PvP and obtuse UI/translation weren’t to my liking personally, so it was uninstalled before long.

GW2 would be great with player housing, it’s a pity it hasn’t been on their list of features. I’m sure there are so many creative people that would have a field day with it. One day maybe…