Guild Wars 2 set its fanbase on edge this last week on Twitter and at PAX prime. We learned that raids are coming to GW2 with its next expansion, and on Saturday the base Guild Wars 2 game became free for everyone. Of course, the announcement left fans with more questions than answers. What are the raids going to be like? How are they going to work without the traditional trinity? Are we ever getting a LFR tool?

Since Game Director Colin Johanson of ArenaNet was at PAX Prime, it only made sense to ask him directly about how it’ll all work in the game itself and what it means for the future of Guild Wars 2.

At the forefront of my mind was raiding. I can’t say that I’ve always been raiding in MMOs, but for the last several years, endgame, group-PvE content has been a large focus of my gameplay. Currently, I stream my raids in other games on Twitch, and my progression raid group has been together for going on three years now. Guild Wars 2 was never on our radar because the group size wasn’t that big, and frankly, the group dynamic seemed to not fit what we were looking for in endgame group content.

Johanson assured me that gamers, even in the most difficult Guild Wars 2 content, were barely touching the surface of what players could do in a group. He reiterated to me that although there is no hard trinity, GW2 does have a kind of trinity of its own that players were not always taking advantage of in the current PvE game. He divided the roles into control, support, and damage, and beyond that, groups will have to consider class combos when taking on a raid boss. He said that the only place in the game where all the class abilities are being used to their fullest was in high-level PvP, and he wants to change that so that it takes the same level of skill to raid.

Of course, this made me wonder if there is then going to be an optimal team make up for a raid or a specific boss. As we know in some cases or in some groups, unless you have the optimal team make-up, then you are just not invited to the raid. I was curious about how the ArenaNet design team plans on mitigating this kind of problem.

Johanson said that he believes it comes down to encounter diversity. “Because we have a lot of different boss encounters, we have a lot of different mechanics we can throw at you, and it requires you to bring a really diverse set of skills.” Secondly, the flexibility of classes will help mitigate the problem. He gave an example: “A Warrior’s ability to support the party works differently from a Guardian’s ability to support them, but they are both very capable and fully able to do that. What we’ve seen from our own internal play testing is very different compositions can handle these encounters.”

Because of the large diversity of encounters, I was prompted to ask whether players will be able to swap out abilities between boss fights. Johanson said that currently players are in combat the whole time they are in an encounter, so swapping out abilities isn’t possible. But he did say that ANet is still “playing around with what [it] will let you change.” However, he was quick to point out that weapon swapping can easily change a character’s role in the group, and that can be done on the fly.

The development team’s “playing around” also extended to group boons another group support abilities. Currently, Johanson said that it’s still in flux and there will be parts where the groups will be split. But as of right now, boons affect only the five people who are in your group. 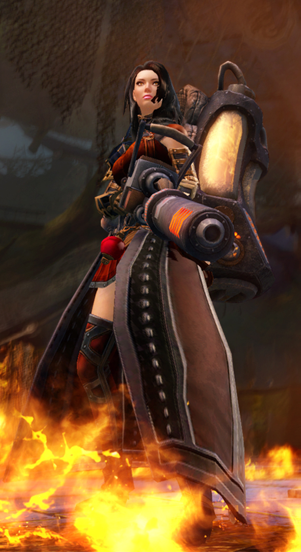 In the same vein, I was concerned about the Masteries needed for doing the raid and why that wasn’t considered attunement. And truthfully, that just comes down to a player’s personal definition of attunement. For some, attunement could mean just having to do one tiny thing before being able to do a raid. For instance, we know that one of the boss encounters in the Heart of Thorns raids will require that you have some of the hanggliding Mastery. Johanson said that there will certainly be raid encounters that will require “soft levels of Mastery, like the hanggliding.” He also mentioned that some encounters will require only some members to have certain levels of Mastery.

His primary concern regarding attuning is that people who maybe leave the game for a period of time don’t have six months of rep grinding or other activities to do before they can begin raiding again.

Although that didn’t completely alleviate all my concerns about raids — I still think that players being players are still going to latch on to an optimal raid-team configuration — it’s good to know the direction ArenaNet is taking with raiding, and unfortunately, we will just have to try some things for ourselves before we can know for sure.

Being a raider myself and sometimes enjoying the ability to group up with other random people, I asked about a group-finder system for raids — whether there is one in HoT or will be in the future. And he explicitly said no — there will not be one at the launch of HoT, and there are no plans to ever put one in. He emphasized that this was intended to be coordinated endgame content, not something a PUG can tackle:

“[For raids,] we focused on players working together on really challenging content. I believe that is part of community building. We cater to a ton to different playstyles. We have content that you don’t have to group for and some that you can do in ad hoc groups. Basically, you can go anywhere you want to join in with other players already.”

After the announcement of HoT, many players were concerned that the old game content would be left in the dust. Unfortunately, that is partially true. But Johanson wanted to reassure players that even though there is a lot of focus on the new HoTness, events like Halloween will still continue and patches will still come to the old game. Johanson believes that there will be plenty to do in the old game for free players.

That said, moving forward, everything brand-spanking new coming to the game will be specifically designed for players who have bought Heart of Thorns. Specifically, the Living World story will be only for HoT players. He explained that story itself has moved to Maguuma, and it only makes sense that the new Living World updates will happen over there.

As of right now, that’s all that can be revealed about raids and new content. Johanson couldn’t talk about anything more specific because much of it is still in playtesting, and seriously, where would the fun be if we knew everything?

You can play Guild Wars 2 for free right now, and if you’re looking to join in the new content when it launches on October 23rd, know that pre-purchases are available through the Guild Wars 2 store. Stay tuned tomorrow for our second interview with the ANet team!