If you were to think of Sega and MMOs, chances are the only thing that would come to mind is the Phantasy Star Online franchise. While those are great games (even though we’ll probably never see PSO2 in the west!), there was another MMO that Sega dabbled in during the boom years of the online gaming industry.

This game was 10six: a hybrid of real-time strategy and sci-fi shooter, played out over a persistent multiplayer world. While 10six had a very short run initially, it still lives on for the fans who find this mix of gameplay compelling and unique.

Base building and blasting, doesn’t that sound fun? Let’s go back in time to the late ’90s and early 2000s to see what 10six was all about.

If nothing else, the creators of 10six have to be lauded for their ambition and vision. In a time when 3-D was practically a bullet point feature by itself (and still pretty rare in the dawning genre), 10six came out with a persistent 3-D world that offered a smorgasbord of treats for gamers, starting with the promise that it could handle up to a million players simultaneously. And no, it never got close to that in terms of population.

The story behind 10six is that a rogue planet enters into our solar system, loaded with desirable resources. Four corporations (BruteForce, Infrastruct, ToyCo, eXtreme Corp) lay claim to swaths of Planet Visitor, as it was called, and start duking it out for resource rights. Players got to align themselves with one of these themed corps and got to work building up a base and sending out raiding parties to attack other players.

What was interesting about 10six is that it really was two games in one. In the base-building mode, players could pull back to a god’s eye view to place structures and defenses as they would in any contemporary RTS. Then they could hop on a hoverboard (because hoverboards are awesome) and get into a firefight with the enemy in a third-person perspective.

It was important for players to join up with a good guild (Mutual Defense Network), as their bases would stay active and attackable — even when the player him or herself went offline.

“The first true persistent universe on the internet”

An early ad for the game called 10six “The first true persistent universe on the internet,” and while that claim is truly debatable, 10six actually delivered on the promise of its concept. Players got in, waged endless war across Visitor, and emerged with battle wounds and glorious stories to share.

Amazingly considering its feature set, 10six was a tiny game by modern standards. The entire MMO required only 150 MB of hard drive space and could be played over a 28.8 Kbps line.

While the game itself might have been solid — and a little before its time — the company failed to give it the support and advertising that it needed to thrive. You can’t be blamed for not knowing about 10six, even if you were actively gaming in the early 2000s, because very little was put out there to promote it.

So how did the game come about and what happened to it? Let’s investigate.

In 1995, Sega formed a subsidiary called SegaSoft in California with the purpose of creating games for both the PC and its current console, the Sega Saturn. One of SegaSoft’s first and biggest projects was the creation of its own games service provider called Heat.net.

Heat.net went live in 1997 as a sort of precursor to what we see now in Xbox Live and PlayStation Network. Initially, the service cost $10 a month, although later on players could access basic gameplay for free. What was interesting with this service is that Heat.net allowed players to earn “degrees” the longer they played and spend those in an online store for games, gear, and magazine subscriptions.

The degree system was horribly abused, with players developing all sorts of ingenious ways to stay logged in (even when not gaming) and SegaSoft sending in virtual police to root out AFKers.

The games service was a fair hit, boasting around two million players and a library of 130 games (including first-party Sega titles) by 2000. It was the perfect platform on which to release a proprietary online title, in this case 10six.

In 1998, work began on 10six with the help of Wombat Games (which boasted devs from MUDs and Ultima Online). The development team was pretty dang small, fielding only a single artist.

Sega Art Director Douglas Shrock said of 10six that it was “definitely my favorite game of all the ones I have worked on. I was the only artist on 10six after I started at Sega, and I was able to give it a uniform look and feel by redesigning all the in game art. I did the teaser cinematic, posters and other advertising items, even tattoos! I used Lightwave and 3DMax on 10six.”

The project moved quickly, entering into a public beta in the last two months of 1999. It was then that SegaSoft promoted 10six as “online gaming’s best-kept secret.” 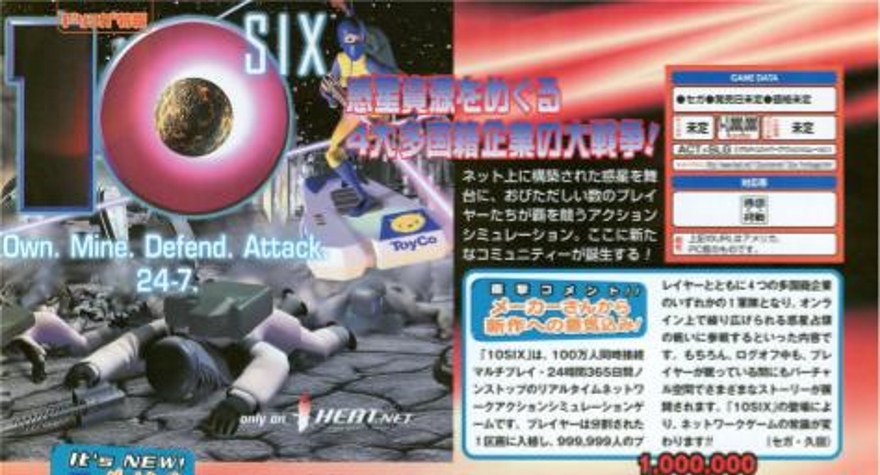 Over the next few months the beta rumbled on, and in March 2000, Sega announced that it had plans to bring 10six to the Dreamcast and its four million owners.

“Segasoft’s still upcoming massively multiplayer online realtime strategy game 10six, in addition to being the recipient of far too many adjectives, is also the first bit of Dreamcast news to come out of the Spring 2000 Tokyo Game Show,” press reported in 2000. “As rumored a while back, the game will indeed be making an appearance on Sega’s console of choice for the upcoming next generation gaming wars.”

A month later in April, 10six officially launched with a seven-day free trial and a subscription cost of $10 a month. While there were no major problems with the launch itself, it was clear early on that the game wasn’t destined to be a smash hit for Sega.

Sega had problems elsewhere, as it had to shut down its Heat.net service in October 2000 due to financial struggles. Heat.net sort of morphed into the high-speed SegaNet, which the company described as “better, stronger, faster, bearing a new name and a better business plan.

PR adjectives aside, Sega obviously lost the heart to pursue online PC gaming and didn’t see much of a financial future in it. The Dreamcast version of 10six never materialized, and by 2002 the writing was on the wall for the PC version as well.

“On May 31st, the era of 10six has come to an end,” SegaSoft announced. “We here at 10SIX.com and Sega.com would like to thank each and every one of our loyal members for being a part of one of the biggest massively-multiplayer online communities. We at Sega.com are still committed to delivering the best gaming experience, and we encourage you to check out some of our other great sites.”

After a brief two-year run, 10six was deep sixed — but not for good. With the help of one of the game’s most passionate developers and a team of fans, 10six was taken private and reemerged in 2003 as Project Visitor. Believe it or not, Project Visitor has been operating continuously since then and can be played even today.

MMORTS games haven’t always had the best track record in the industry, but does that mean they’re doomed to obscurity? Perhaps games like 10six simply needed more support and funding to find their role in the market. At least we can go to sleep tonight knowing that at least one game escaped the executioner’s block to carry on the legacy of an adventurous era.

Hi, Justin. A note about the inception of this game.

I created the game concept and world, I got it financed and produced it, and my company Postlinear Entertainment developed most of it. We invented some core, underlying mechanisms for virtual property, and these were spun out of Postlinear into a consumer banking services startup that I became the CEO of. Sega picked up most of our game dev team and took it forward to market.

Transium was named, by the way, for an earlier game development company of mine called TRANS Fiction Systems. We built early interactive fiction and narrative simulations, like Star Trek, The Promethean Prophecy, and Hidden Agenda, a celebrated political simulation.

I think I may be the only person in the world who knows (or probably cares!) what the mysterious planet Visitor is, and why it appeared in our solar system. There is an unproduced sequel that reveals all. I haven’t revealed it as of yet, all these years laters, because I detest spoilers. ;)

Another fun fact: 10Six was originally conceived in conversations with Steve Case, as a 2D network game proposal for his QuantumLink service. At the time, I called the game Uncle Romulus. Steve offered me $70k to develop it (and it was designed in part to make you want to be online all the time, racking up access fees!) but I thought it was inadequate, and so held onto the idea for a number of years.

Thanks for the nice writeup! You can still play at http://ProjectVisitor.com – some of the devs kept the code running and 10Six/Uncle Romulus lives on.

Choose My Adventure: Tearing through the colorful world of Trove at...