“It’s possible, pig, I might be bluffing. It’s conceivable, you miserable, vomitous mass, that I’m only lying here because I lack the strength to stand. But, then again… perhaps I have the strength after all. DROP… YOUR… SWORD!”

Can’t imagine why this screenshot of Secret World Legends from Winterskorn has me thinking of The Princess Bride. It’s inconceivable. Also, that sword doesn’t look like it can cut very well, just saying!

Many of you took up last week’s challenge to share some pics of your character “dinging” a new level. I was particularly intrigued by Zulika Mi-Nam’s documentation of a rather momentous occasion in Asheron’s Call.

“Hitting the original max of level 126 in Asheron’s Call used to set off a big set of fireworks and became a guild event for those that reached it,” he posted. 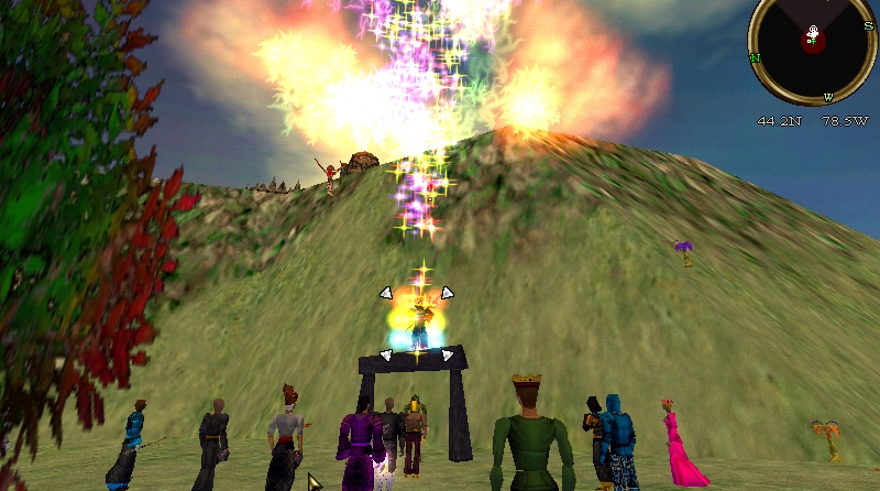 Rafael12104 makes slinging two pistols look drop-dead gorgeous: “I’m back in Blade and Soul just in time for the Gunslinger drop and I couldn’t be happier. So much fun. So prepare yourself for another round of BnS Cap-spam. Here is a little taste.

“My new slinger, Haliee, looks more like a ‘loli’ much to the chagrin of some. However, she is anything but that as anyone who has had an unfortunate encounter with her can attest. The girl just kick’s ass and chews bubble gum.” 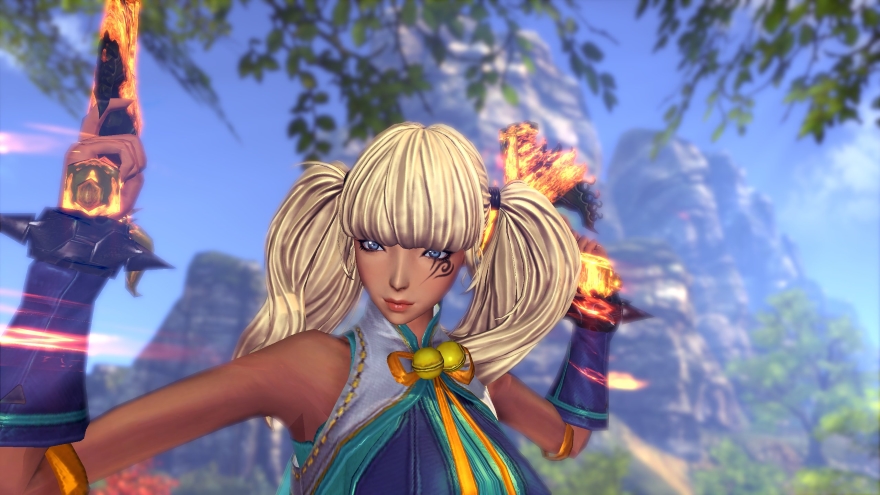 If you want to take some incredible action shots and want to pause the action, look no further than Warframe.

CapnLan brings us this dynamo in motion: “As I posted in WRUP, Hydroid Prime has quickly become one of my top favorite frames. Have some pics of him being a badass with his new guns and his Kraken. ‘I do what I want ’cause a pirate is free.'”

You are a pirate! 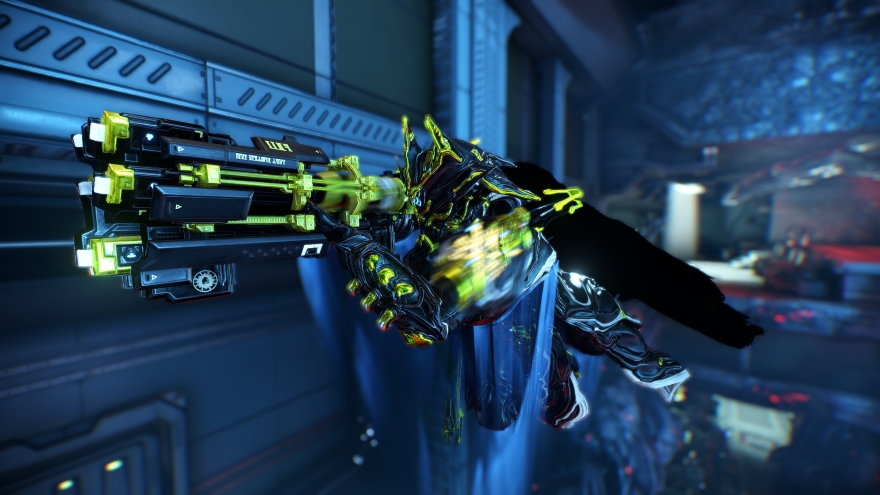 Make no mistake, Star Citizen is crushing it in the visual department.

“Even though the scenes in Star Citizen’s Arena Commander map Broken Moon isn’t particularly demanding at all on hardware of any sort, it’s rather aesthetically pleasing in 21:9,” Deekay Plus writes. “With their much-hyped camera system actually getting wider or perhaps putting the camera more forward in 21:9 than in 16:9, in the latter I can see the sides of my helmet where as in 21:9 less of the helmet is visible and therefore more visible game space in spite of the helmet. I’m almost tempted to grind out one of the heavy armor space suits to see if their more limited view has similar characteristics.” 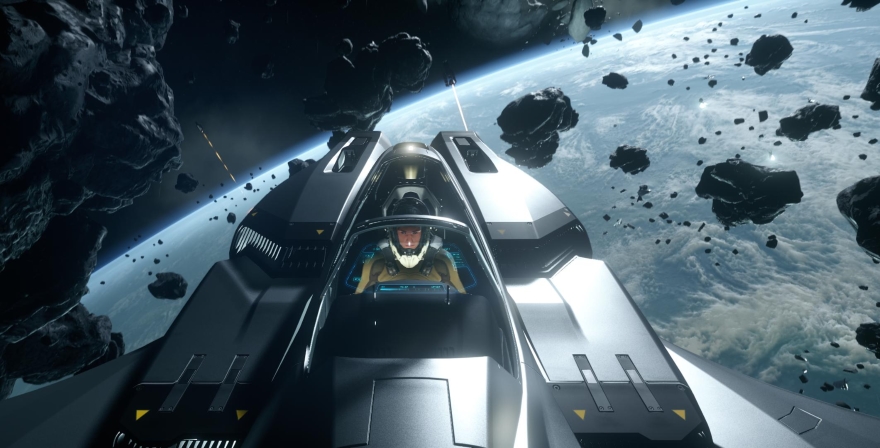 Let’s get another round of screenshots going! This week’s challenge is “prison break!” Share pictures of in-game prisons, jails, cells, or any interesting place of captivity — and let us know how you survived such a harrowing experience!

Busy couple of days here, even in terms of my nerdy hobbies (started a Starfinder tabletop rpg campaign for friends on Roll20; had to check out the new Star Trek: Discovery, continue watching The Orville, and so forth).

I did manage to get invited to the wedding of Go’el (a.k.a. Thrall) and Aggra in World of Warcraft, which was a nice surprise. Not sure I was properly dressed for the occasion, though. :-)

Take care of yourselves, please, folks. Life would be lessened without you here.

I’m just getting back into this game after 3 years. After playing two days, I find myself asking the same question I’m pretty sure everyone that plays this game is asking: WHY IS NO ONE TALKING ABOUT THIS GAME?!

Nice! Thanks for the mention, Justin.

My Gunslingers Haliee’s adventures continue in BnS. And it just so happens that today she had to escape from a prison, The Talus Dungeons.

What is interesting about this escape is that she’s lost 90 percent of her attack power due to an open wound that won’t heal. And her flight to freedom included some powerful prison guards and a man with a violently removed iron mask.

Been having an absolute blast with PoF so far, the maps are HUGE and insanely detailed, there’s stuff to do everywhere! And mounts, omg, THE MOUNTS! Joy of movement indeed <3

Anyways, here's me and my griffin bro doing some exploring.

(Good luck trumping flying mounts with something better for next expansion, Anet!
Such a wasted PR opportunity!
Now you can keep your altitude! There is only flying up as mechanic left, but it already negated many especially designed obstacles for gliding and maybe even for normal mounts, where they didn’t specifically implement no fly zones, which fast tracks us right to “WoW Argus territory”!) :/

There’s always the spider mount they cut. Maybe it can wall crawl or something.

Next to the bunny that would be an awesome alternative to gain altitude as a normal mount! :)

But selling vertical flying or spider mounts for a possible next expansion is still way less of a feature than the actual introduction of flying mounts! Maybe they did it in this secretive way in the hopes for some type of viral marketing… I doubt though it’ll have the same impact as when they would have used it as a main feature next time or they didn’t want people raising questions about the usefullness of normal mounts before launch. It feels like almost instant devaluation of carefully made content!

And when you see how much faster that griffon also is… :/
https://www.youtube.com/watch?v=jph_VQuvZ0w

This pic has such a “storybook” vibe going; I love it!

Nice. I love that mount.

Welcome to the Hotel California…

Not all characters I play are pink though. In fact, I tend to reserve said color for my mains only when it’s available. I hope that makes sense. :)

…I mean, come on. It would get pretty boring if all my toons where of all one chromatic color. o.O

There are lots of prisons in SWTOR. For example, here I am in Belsavis, where the whole planet is a prison.

How did I escape? Well, here you can see my character pondering how turn on the console, which as you may note, has a single, centrally located button larger than his head.

You might think the answer is “Push the button, Frank” (especially if you are a fan of MST3K). But as it turns out, though, you need to clear four antipodean hallways which contain more computers, push those buttons, and then push this button. Of course!

Ah yes. Belsavis. Nothing like a secret prison planet to get you in the mood for a prison escape.

And btw, it is one of my fave planets. It truly ran the gamut between fire and ice. One minute you are on a snowy tundra, the next you are staring down at lava. And Soa is a resident. That’s not a neighbor you want.

So jails, cells and such…
Right.

“Do you like movies about gladiators? Have you ever been in a Turkish Prison (Vollym’s Battle Pit) ?”
No shortage of such places in almost every MMO that comes to mind, but since I’ve been at Guild Wars 2 so much of late, it gets the favourable nod. I headed back over to Snowblind Peaks to grab a screen for this week. My Thief is often wont to go full acrobatic in the arena melee.

(Stares at the naked pink dog thing with two forelimbs and an abdomen for legs)
Oh! There’s your thief. Nice.

These are all really good and I can’t wait for next weeks glut of GW2 screens. The expansion is GORGEOUS!