Ever wanted to walk around on Coruscant? Star Citizen may be granting your wish, or at least a solid approximation. During this weekend’s CitizenCon, Cloud Imperium’s Chris Roberts demoed a slice of the persistent universe mechanics, showing off detailed cityscapes and procedural generation at work on planetary surfaces. It’s truly stunning for sure, especially in conjunction with Roberts’ announcement that the studio will be switching to a “date-driven content release schedule,” and it’s taken the backer community’s mind off of the 3.0 alpha (still in Evocati testing) and Squadron 42 (more news promised in December) as people pour more money into the game (163M and counting now).

Meanwhile, Camelot Unchained delivered a new chunk of its beta doc with its “plans for making the rest of Alpha and then Beta 1 a much more fun and rewarding activity than it has been to date.” Specifically, CSE is implementing what it’s calling “The Dragon Circle,” a proper testing framework featuring focused tests and weekend siege events that will reward beta participants with everything from “temporary cosmetic items to permanent items, tier upgrades, and even cash rewards.”

Read on for more on what’s up with MMO crowdfunding over the last couple of weeks and the regular roundup of all the crowdfunded MMOs we’re following.

Watch Star Citizen’s CitizenCon 2017 here, plus check out alpha progress in Around the Verse - In this week's episode of Star Citizen's Around the Verse, the team says it's gotten its must-fix bug list down from 20 to 16 blocks, improving load times, repairing disconnection…

Path of Exile plots turmoil and mayhem - [AL:POE]Due to a rearrangement of its content release schedule that resulted in a delay for the next patch, Path of Exile is attempting to make it up to its community…

Albion Online outlines content plans, will give more love to the solo player - With Albion Online now in a launch state and rocking a "stable economy," Game Director Robin Henkys says that it's high time to take a look at what the development…

Chronicles of Elyria on a la carte prices, skins, and this weekend’s convention game - Looking to just buy your way into an exclusive alpha program? Want to put your name on a star or tombstone? Thinking about adopting a pet? Chronicles of Elyria has…

Buy a new Intel Optane SSD, get a Star Citizen pixelship - As part of its CitizenCon 2017 reveals this morning - or this afternoon, if you're local to Frankfurt, where the event is taking place - Cloud Imperium announced a partnership…

Albion Online begs you to put down your murderin’ sword and farm pumpkin pips for Halloween - Hey there, you barbaric hordes roaming the Albion Online countryside, slaying other player characters in your path, burning their villages, spitting on their guild emblems, and grinding up your alchemy…

Crowfall explains castle wall construction, addresses patch 5.3 - Chances are that all save but the most architecturally nerdy among you don't find walls, panels, and sockets a particularly exciting topic. But your opinion on this might change when…

Path of Exile looks back on the four years since launch - [AL:POE]The story of Path of Exile is a pretty good one. Four years on, the game has gone from being a rather unknown little title from Grinding Gear Games to…

The Stream Team: Happy fourth anniversary Path of Exile! - [AL:POE]Has it really been four years since Path of Exile launched? It has! With so many expansions, you might have thought it had been longer, or you've had so much…

While the patch is compiling here are some pics from what is coming… pic.twitter.com/8a6wNMr3E7

The jealousy of people is delicious.

sorry Schlag I stared at the painting trying to remember it’s source for a few minutes before it dawned on me – thought I’d help a fellow traveler out :)

Such a fantastic, surreal and disturbing artist. I really need to brush up on him.

SC looks awesome as usual. But its going to be a loooooooooooooong time before its done.

Why do we keep getting promising eye candy from SC but they still not have supplied nothing but a buggy tech demo?

It just seems like the old snake juice seller from wild west, a tonic to cure all but it actually cures nothing and may kill you.

LOL what? Obviously you didn’t watch any Citizencon over the weekend. Get your shit straight before posting this kind negative verbal vomit. If you hate the game that’s fine, but don’t crap on it with nonsense.

I watched it and is what you saw playable – NO, I am entitled to my own opionion and if you dont like it then dont read it

You clearly saw what you wanted to see because what we all saw was not at all the “buggy” demo you claim it was and I did see one person playing it live so I’m call me stupid, but that means it is playable. Who doesn’t like eye candy?;)

The current playable game is a buggy tech demo I am sorry you got your wires crossed.

I have played a fair bit of and for 5/6 years work its a total mess and pretty embarrasing for the amount of people working on it.

As for the demo we saw at citizencon, it really did look amazing and of course it would and if it was from any other game i would be going crazy.

But no its yet more of the carrot on the stick for the whales and wont be seen in SC for years up on years with the current track record it may never be in game unless the tech is licenced out which i suspect will be the end result.

So carrot on a stick, snake oil seller are similar things I hope now you understand my point, I look forward to the next SC presentation for yet more eye candy which again will be lacking in substance.

Nice to have inside knowledge on SC’s development… As for the clarity on what we can expect from the game, I would say it is as advertised. Push backs on development deadlines happen. Patience is warranted, but expectations on release not so much.

Your buggy tech demo has more content than some AAA games.

and which triple A games are that? Have you played said tech demo because I have and if I played a AAA game in that condition I would be asking for a refund.

Great presentation, fantastic tech. Overal the best CitizenCon so far. I enjoyed not only Chris’ keynote, but also Ivo’s presentation of walking through obstacles tech, talks about Xi’An and art of planets panel.
SC community after CitizenCon: 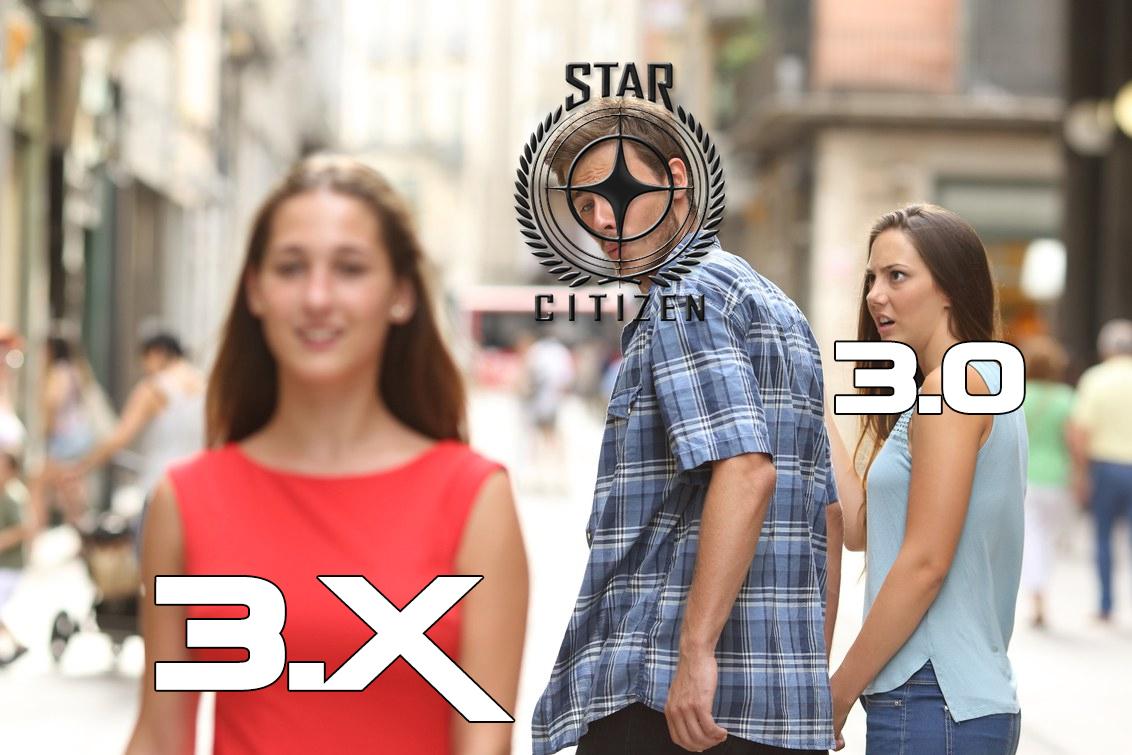 This graphic sums things up perfectly.

Star Citizens are saying “We don’t care about 3.0 anymore, our interest is now on some undetermined patch getting further away from us as we speak.”

We just know everything about 3.0 now, and ofc people are anticipating whats coming next

3.0 is what’s coming next, there’s only a few people that have access to it right now. 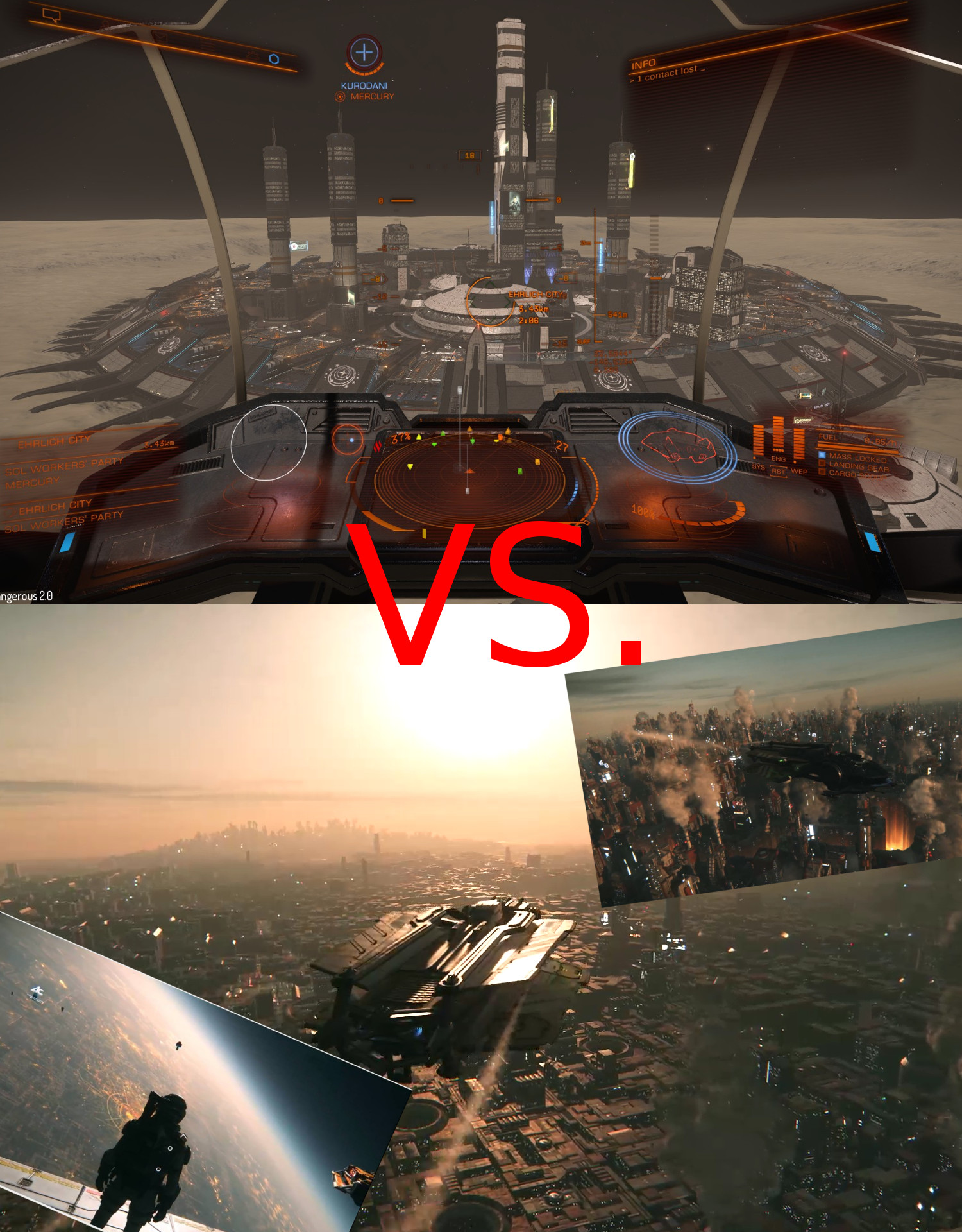 Oh great bait mate….
You know what I see here, a comparison between a city in a playable game and a city in a prototype demo. I like that they have to use a shot from a 2 year old build as well. Nothing like being honest with the facts is there :)

Here’s one for you.

That poor bastard is only using a DK1, it must look like crap :(

Not sure why everyone started showing projectors and stuff, I mean I used to play pretty much anything on a triple monitor setup, it is nothing special :)

Sorry Schlag, but Chris milking whales thematic grew old, especially under video where they showed such impressive tech and development.

Once again, selling dreams of tomorrow instead of delivering on the promises of last year. Why are people suckers for such an obvious tactic?

You know what I find odd? That none of the fans seem to be talking about the content/gameplay which was meant to be coming in 3.1 – 4.0

Why were they showing off a procedural city instead of showing off working jump points or the whole Stanton system or proper gameplay for any of the professions, mining, quantum interdiction, farming, rescue, exploration and discovery, science and research etc? Those were all things they announced at last year’s Citizencon and were meant to be coming in 2017 but where are they? Why are they not showing any of those things in a functioning game build?

Instead we see a tech demo for procedural cities, cool enough in itself but once again it’s advertising something that is in the future rather than focusing on what should be available now.

Its easier to awe crowds with tech demo. And they did show missions system before. Mining is probably not yet ready to show but it is heavily in the works. Some other gameplay mechanics are still early in development.
They talk alot about gameplay stuff in their weekly podcasts

It comes from the Elite Dangerous Forum, surprice…
CR already has delivered 60% of the promised Stretch Goals, the problem is that it takes much more time than he has estimated.

It comes from the Elite Dangerous Forum, surprice…

And that somehow means they don’t have a point?

CR already has delivered 60% of the promised Stretch Goals, the problem is that it takes much more time than he has estimated.

60% of the stretch goals… uh huh, that sounds genuine.

Yeah not sure where the high horse is over on the FDev forums.
Elite is a decent game and I play it often but it has had FUCK all in terms of decent content this year.

This last patch was just a joke, the only thing in it that I ever notice is a pretty new interface for the livery section.

Funny that you and a couple others have to resort to childish tribalism because you have nothing to refute the actual comment.

Scripted tech demo. I was waiting for someone to jump off the space station and burn up in the atmosphere trying to reach the “planet” the were just on. Nope.

No crashing a ship.

No interaction with NPCs or other moving objects in the game’s world.

Nothing outside a roller coaster tech demo made to look cool and sell more stuff. Disappointing all around.

if you jumped off the ISS how long do you think it would take for the planet to pull you to earth and burn you up?

163 million in player funded contributions? I know this includes all those ships, but damn! No pressure there. Holy sshnikees. If they don’t deliver… oh my.

I was blown away by the Keynote, that planetwide city was amazing, and the tech they use to build it looks fantastic.

I was losing some hope in SC, but after watching that keynote I am pretty hyped for it again, looking forward to 3.0 and beyond!