“Like many, when Destiny 2 launched late last year, I played it for a few weeks, then put it away,” said Rees Racer. “I was persuaded by friends and good reviews to have another go with the Forsaken expansion, and have been enjoying it all very much. All the challenges and co-op stuff is good fun. First, I needed to get through the first two expansions, though.

“During the Curse of Osiris missions, the Infinite Forest inside Mercury’s core transports you to different times in the planet’s history. I was struck by the beauty of the iteration from the past, when the Traveler had transformed Mercury into a garden world. I decided to take a moment and have a look at the sunrise.” 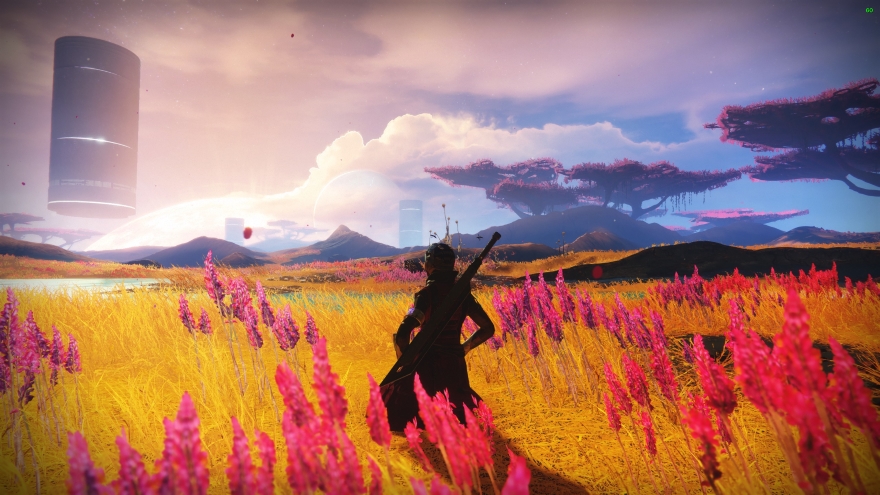 Here’s a familiar sight for many of us — but not all of us, as Hugmonster confessed.

“I’m 13 years late to the party but I finally started playing the original Guild Wars,” he wrote. “STUNNING!”

I don’t have the heart to tell him what happens next. Look away, Hugmonster. Look away. 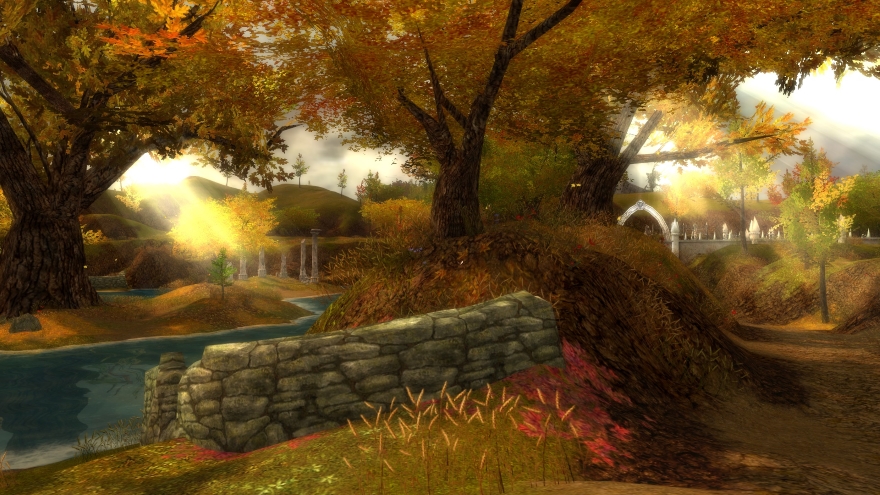 You all have been piling on with the terrific screenshots as of late and really taking up these challenges, so I shouldn’t have been surprised to see so many readers posting pics of their characters facing out at an impressive vista. But does it get any better than this?

“Here’s an old one I’ve always liked,” Mysecretid said. “My Superman protege in DC Universe Online takes in the view of Earth from the Justice League’s orbital headquarters.” 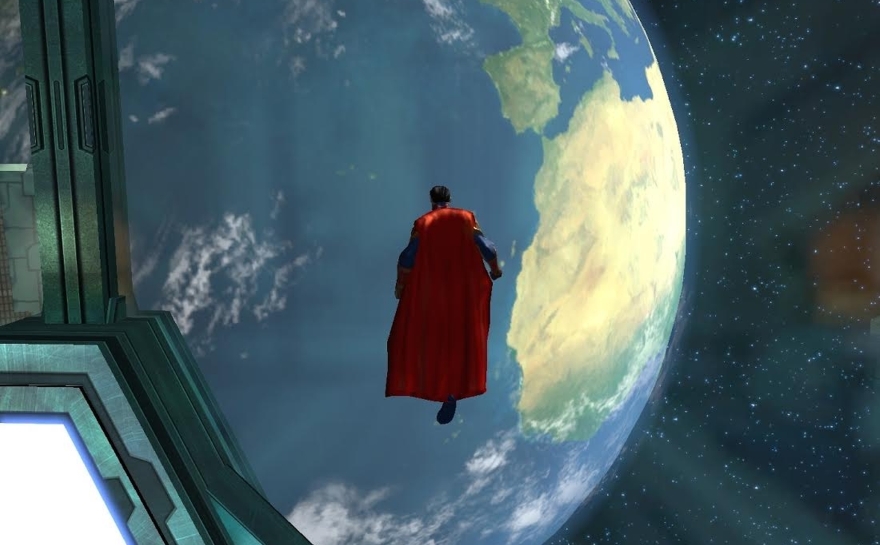 “Booted up Elder Scrolls Online,” submitted Pandalulz. “All I remember from the first time I tried it was so much gray and brown. But I was just puttering around outside Summerset and stopped on the beach outside the menagerie. Already missing the beach vacation from last week.” 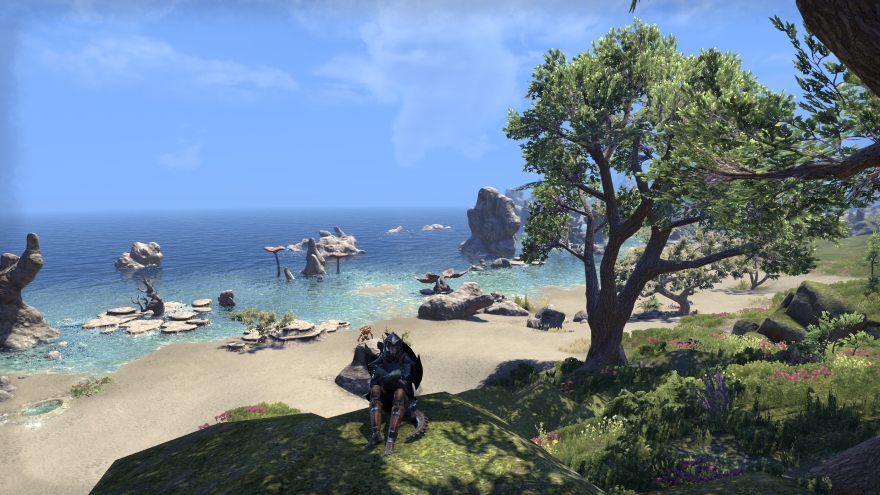 What happens when you take an already great-looking game and then give it a huge visual overhaul? You get Black Desert.

“BDO is a beautiful game, it can’t really be argued,” argues Hikari. “I have an endless string of pics from that game that fit this request, but we’ll post one using the new remastered graphics.”

With fall here and Halloween on the way, I’m sure many of our thoughts have turned to witches and candy and jack-o-lanterns. Our screenshot challenge of the week is to ignore all of the Halloween decorations that have been added to our MMOs this month and instead take a picture of a zone, area, or building that looks Halloween year-round!

A rather obvious location in GW2, what with it being in one of the starter zones.
But I’m mostly curious if uploading a screenshot of this size will work at all.

Places that seem Hallowe’en spooky all the time?

My thoughts immediately went to the planet Nathema in Star Wars: The Old Republic..

Nathema is introduced as a desolate, windswept ruin of a world, now hosting only one structure — an abandoned “sanitarium” complex that was always more torture chamber than medical refuge.

This was the place the Sith Emperor Valkorian sent his Force-powerful, but dangerous daughter, Vaylin, to be mentally “conditioned” as a child.

The in-game evidence suggests that Vaylin was always a broken person, even as a child — but nothing on the horrific world of Nathema could’ve ever been about repairing her damage.

I took my Sith-blooded Jedi Guardian back to Nathema for these screenshots.

A house of horrors, indeed.

Nathema! Oh, yes. Brilliant call out. That place was creepy. They managed to make the light out in the open world lifeless. There was no comfort in it. The environment was oppressive and depressing.

I agree with Rafael, great pics.

Thanks for the feature, Monsieur Justin! Nice to see the pic just doesn’t resonate with me alone.

I found WRUP a bit confounding this weekend. I saw mentions of: (half) root canals, broken relationships, Thanksgiving in Canada, and of course the almost daily reference to the deplorable state of politics in the States (this time regarding a judge). I love reading the personal stories of the people I’ve come to know (in a way) after several years on Massively.

I left the global news industry after a decade.
Many already know I’m personally much happier for it.

I believe the south island of New Zealand is closer to Antarctica than New York City is to Las Vegas. I’ve learned to appreciate the insulation to a degree, regardless of my extensive travel.

So, here is a “shot” of some “screens” I took last night (which was Sunday evening at the time, but it’s Monday afternoon already now). I stay informed, of course, but like to take time for entertainment, too!

-On the left is some Test Cricket (Australia and Pakistan – Day 1).
-In the middle in EVE Online. After killing hundreds in Assassin’s Creed Odyssey and about 20x more than that in Destiny 2 this week, I felt some quiet covert-ops reconnaissance was in order.
-On the right is the Formula 1 Japanese Grand Prix.

I had a lovely weekend, and truly hope everyone had a favourable one as well. I do believe some of these games, and comments here, can help unite us all while others in the world are determined to be more divisive.

For flights of fancy, perhaps? :-)

My second thought was of the character Ozymandias sitting in front of his “wall of screens” in the Alan Moore/Dave Gibbons graphic novel, Watchmen (the venerated graphic novel, mind you, not the highly-dubious film adaptation it spawned).

In any context, an impressive setup, Rees — may it serve you well!

Orochi research facilities always give me the heebie-jeebies. And I question their commitment to healthy childcare methodology.

It’s healthy for children to be able to release some of their aggression in productive ways.

Sometimes, I imagine Orochi is actually Japanese for “What the hell are you doing, you people???” Orochi’s got problems, that’s for sure.

Thanks for the pic!

Hate this mission for many reason. One of them is at some point this “child” jumps exactly at your screen.

In other games the atmosphere in this shot might be described as creepy, ominous or maybe foreboding.
But this is TSW and it was in fact just a fine spring evening, ideal for a leisurely, late night woodland stroll.

…the rave braces makes me want to pump up the techno though. o.O

TSW had the best illegal raves going on in the woods ;)

It’s always Halloween in Hag Fen, also here I am going on my daily lava swim.

Found this planet in No Man’s Sky a while back. It’s called a “Doomed Jade World” and the entire planet is in black and white with a blood red sky. There are no filters applied to this picture. This is how it always looks. It’s downright spooky exploring the forests here on my own.

That really makes me want to jump back into NMS 😍 So cool!

…this also makes want to pump up the techo! O.o

Uta, I’m starting to think that, maybe, you just want to pump up the techno today! :-)

Halloween all year? Easy peasy. The Highland Necropolis in B&S. Unfortunately, the Dark Realm’s forces poured into this once beautiful and lush area after a prince tried to make himself emperor. Oh, it is a long story complete with fratricide and betrayal.

The net-net, demons and the undead have a place to live in the earthly realm. Oddly enough, this dark hoard does seem to enjoy the holidays.

The first pic made me think of the Borg, somehow. I’ve probably been playing too much Star Trek Online again …

Thanks for the pics, Rafe!

Lol! Well, they do have a terminator vibe to them. It almost looks like they are made of metal.

You know what… forget what I said… let’s give it up for the horror genre games that give us those Halloween vibes all year long. Dead Frontier 2 is immensely fun and makes me scream out loud when I play, as my audience’s busted eardrums can attest…