With other City of Heroes spiritual successors lagging behind in development, the weight of our hope for the future of superhero MMOs lays upon the shoulders of Ship of Heroes. Heroic Games is making great strides in bringing this title to market, although it’s not quite there yet.

What is here, however, is Ship of Heroes’ mission beta — a month-long event in August in which the public is being invited alongside donors to try out a story arc or two while also getting eyeballs on the game as a whole. For myself, this will be the first time that I’ll be trying out Ship of Heroes as a functional MMO, and I thought I’d offer up my initial impressions during this experience. How does the game feel? How’s it shaping up? These are the foremost questions on my mind. 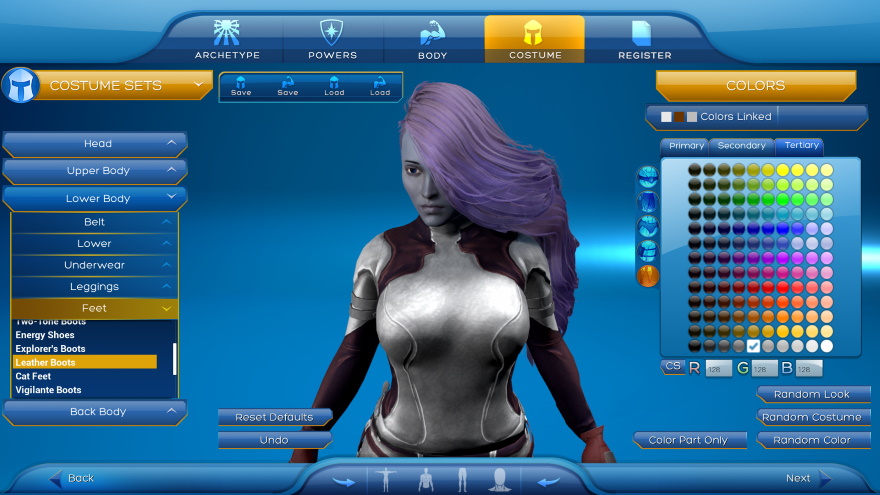 As any City of Heroes vet knows, making sure your superhero MMO has a very robust character creator is dead essential. And while Ship of Heroes still needs to plug in more powersets and costume pieces, it’s already everything you would hope for in this department. There are tons of options, and I spent well over an hour just fiddling with this alone as beautiful character creation music played in the background.

Ship of Heroes almost slavishly copies its spiritual forebear, from the selection of archetypes to the mix-and-match powersets to the selection of body types (male, female, and Hulk). I went with a tank who matched a luck primary powerset with a Street Sweeper secondary. Then it was off to the costume creator to make her look amazing. It was here that I felt a lack of options — although there are already quite a few — because I couldn’t slap a symbol on her chest, put anything on her back other than a cape, or other extra frills that I’ve grown accustomed to in similar MMOs.

Once in the game, I did what we pretty much all do when we get into a virgin MMO: Spend some time fiddling about, adjusting settings, and feeling things out. Right away, I can tell that this is a mixed bag, as befits a beta. There were little things that impressed me, such as how fun super speed was or the use of kinematics — how my character’s feet would automatically adjust to the differences in terrain as she came to a halt.

But it’s not all golden. The movement is certainly floaty and janky, interactive elements such as doors don’t always work, the UI icons weirdly hard to see (there is an option to upsize the UI’s scale, but it does it for everything at once), long hair moved nary an inch, and the world still looks a little flat in the way that early game builds tend to do. I also had to take the mouse sensitivity down to about 60% because the camera would whip around way too fast. No sense making me super-puke, eh?

Finally it was time to check out honest-to-God missions. Captain Exposition (not his actual name) told me in a monotone voice of several different ship departments that I could help. Apparently, you can only choose one department to help at a time, although you can switch which department you’re under when you want. Through these, players can go through story arcs and earn special rewards.

As of the mission beta, there was only one department active: The Mages’ Council. Super-speed away!

At the Mage’s Council, I stopped in the lobby to take stock of the look of Ship of Heroes. As you can see here, it’s a weird jumble of assets that don’t quite fit together. A whole lot of it looks like MMO graphics from the early 2000s that time-traveled to now. Muddled pixels make up a bunch of other pieces, including “art” on the wall. I know, I know: “beta.” But tests like this are about first impressions, and I feel like I’m moving through a museum dedicated to the early days of Second Life and EverQuest II. In short, I don’t think that Heroic Games has the visual identity of this game down yet.

But I’m not here to gawk as a tourist! There are mages to help, and the head of the council tasks me with shutting down a black market dabbling in dangerous magical artifacts. Well, I would’ve gone to help had the game’s doors not borked again and kept me locked inside this building (logging in and out is a workaround for this, I found).

At the Black Market, I got to cut loose and engage in Ship of Heroes’ combat system. The drawbacks first: The nameplates are abominations against humanity, it’s not always clear who you’re targeting, there’s all sorts of animation delays, and mobs that aggro are also hard to identify from their sounds and initial actions. It’s all small stuff that you only notice when it’s not done quite right.

Still, fighting through this building was a whole lot more fun than I was anticipating. I had three combat skills: a shot that froze enemies and locked up their skills for a second, an explosive shot that was like launching a small atomic warhead, and a pistol shot for mercy kills. Forget taking it slow and cautious; I ran around like a maniac blowing up bad mages and finding clickies for the mission objective.

Woo! New power time! My lucky tank went with “Optimism” because how could I not? I really do like this theme, although I have no idea how effective it is compared to other tank builds.

The next mission involved securing a healing device in a skyscraper. It was here that I noticed more environmental hazards (mostly stuff that blew up when you got too near), as well as the regenerative effect of this device. By pulling mobs into this room, I was able to fight while being constantly healed, which made the mission a cinch.

Mission 3 was to investigate the mage academy and root out Red Sigil infiltrators with a drone. I guess this is to teach players to use items, although it was awkward as all get out. Sometimes the device worked, sometimes it didn’t. That’s the Way of the Beta. I was amused, however, at being asked to give a speech to the magic students once I had finished my sweep. I was loudly booed off the stage.

Random observation: City of Heroes players will have a laugh at the reused objects, hallways, and rooms of weirdly laid-out buildings. I had to snicker at some cargo containers that looked way too familiar tucked into one room.

There’s a neat interlude mission where the Mages Council discusses whether or not to fight the Red Sigil. It’s more than a little surreal to see people in what looks like a deep fantasy setting talking about galactic embargos from the spaceship that they’re on, but this is the weirdness that is this game’s setting.

It’s not a superhero MMO if you don’t go sewer diving, am I right? And so I head out for my next mission, which is to protect some newbie mages while looking for Prometheus operatives working underground. It was like doing a jacked-up escort quest with seven NPCs… but I didn’t mind, because they kept up with me, functioned well as a team, and even provided healing. It gave me a taste of what this game’s group content will feel like with a bunch of heroes firing off powers all willy-nilly.

This rather lengthy mission ended in a boss battle with Dr. Cornish — or his avatar, at least. With the team’s help and some seeming bugs where Cornish stopped attacking altogether, he went down in no time. It was then that most of my team revealed themselves to be Red Sigil mages (le twist!), but I didn’t mind. I had won.

So far, this beta is a mixture of stuff that works rather well and stuff that Needs Improvement. But I can see the outline of a really solid game taking shape, and if Heroic Games can make combat tighter, spruce up the graphics, and continue to flesh this out with more factions, it’ll be a great superhero MMO in its own right.

It’s a bird, it’s a plane, it’s Eliot Lefebvre and Justin Olivetti covering superhero MMORPGs, past, present, and future! Come along on patrol as Into the Super-verse avenges the night and saves the world… one column at a time.
Advertisement