I’ve been meaning to check out Space Punks, the new isometric shooter from developer Flying Wild Hog and publisher Jagex, since it launched its free open beta, but I’ve been distracted by other recent releases, the grind in Lost Ark, and the surprisingly addictive new mode in Iron Harvest. At last, I found some room in my schedule to give Space Punks a proper look for this week’s Not So Massively column.

My overriding impression of Space Punks is that it was made by people who believe the chief flaw of WildStar is that it was just so subtle and understated. Even the initial menu screen is an assault on the senses, as you’re immediately greeted by a constant, screeching guitar track. Even the mouse cursor is trying too hard to be “cool.” It appears as a “finger gun” most of the time, switching to devil horns when hovering over buttons.

The game itself is little different. Your character will constantly be throwing out battle cries and one-liners as you play, many totally disconnected from what’s actually happening on screen, all overly loud and painfully unfunny.

I’m someone who quite actively disliked WildStar, but Space Punks makes even me feel a bit of nostalgia for it because even WildStar had more wit than this.

Space Punks is trying to be irreverent and fun, but it’s trying so desperately hard that it comes across as anything but. It is as if the game is reaching out of my computer, shaking me by the shoulders, and screaming, “THIS IS SO FUN. AREN’T. YOU. HAVING. FUN?!?!”

I know I’m probably coming across as very “old man yells at cloud here,” but it really is over the top in a way few games ever achieve. There’s nothing wrong with action comedy, but it has to be done with some degree of cleverness and charm. As someone who has dabbled briefly in humor writing, I know it is probably the single hardest genre to execute well, but too few realize this. 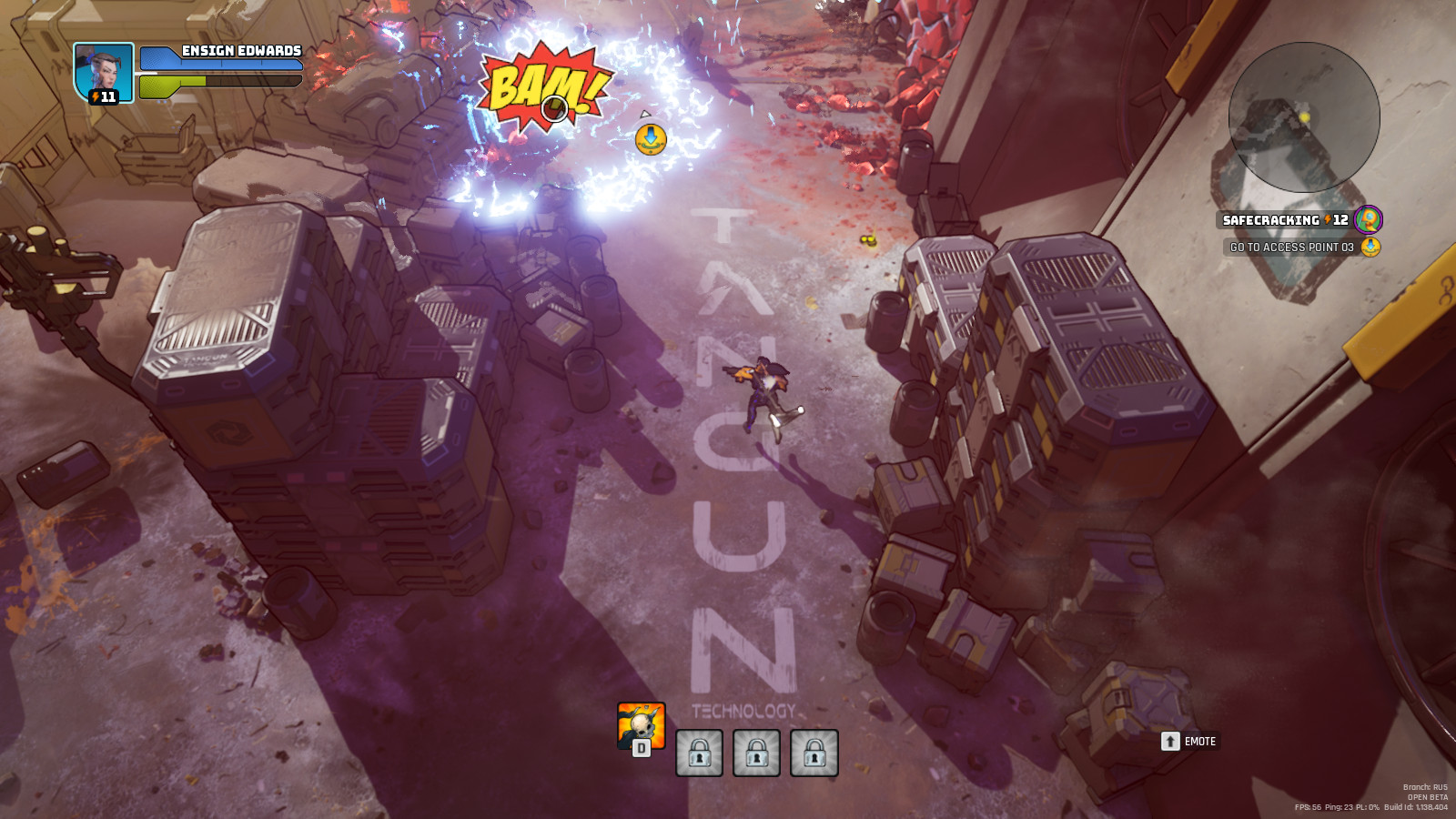 Once you get past the abrasive music and fingernails-on-a-chalkboard humor, you get a game that is… very basic.

I went in expecting Space Punks to be an ARPG in the Diablo mold, and it does have some of that DNA, particularly in its loot grind, but it’s definitely more accurate to describe it as a top-down shooter.

For one, the character building elements are minimal. Each of the game’s playable characters (four now, presumably more later) has access to only three active skills, which are gradually unlocked as you play. There is a pretty large skill tree, but the large majority of its nodes are simply numbers buffs and wouldn’t do much to change your playstyle. Essentially your only character building choice is whether you want to be a tank, a DPS, or somewhere in the middle.

With decently long cooldowns on your small selection of active skills, mostly all you do is shoot things. And the problem there is that the isometric camera eliminates any of the depth you’d normally have in shooter gameplay. There are no headshots and no aiming for weak points. As long as you’re pointed vaguely in the direction of the bad guys, you’ll hit them for full damage.

Your shots also stagger enemies slightly, and enemy ranged attacks can be dodged, so as long as you’re mobile, you’re never in any real danger. The whole game boils down to just strafing while you hold down the left mouse button. You can do more than that if you want to, but there doesn’t seem to any compelling need to do so.

There’s also the option for melee attacks, and I found that a more enjoyable way to play. Dodging the enemies’ telegraphs and choosing your moment to strike felt a bit more skillful. But attacking at range is so much easier and more effective it’s really hard to justify ever going into melee.

One has the impression there is some well-fleshed out backstory to the game, but none of it is explained. I’m apparently a space mercenary trying to get famous, and also a robot cat is giving me orders for some reason. Maybe the story isn’t fully implemented yet — the game is still labelled a beta, after all. 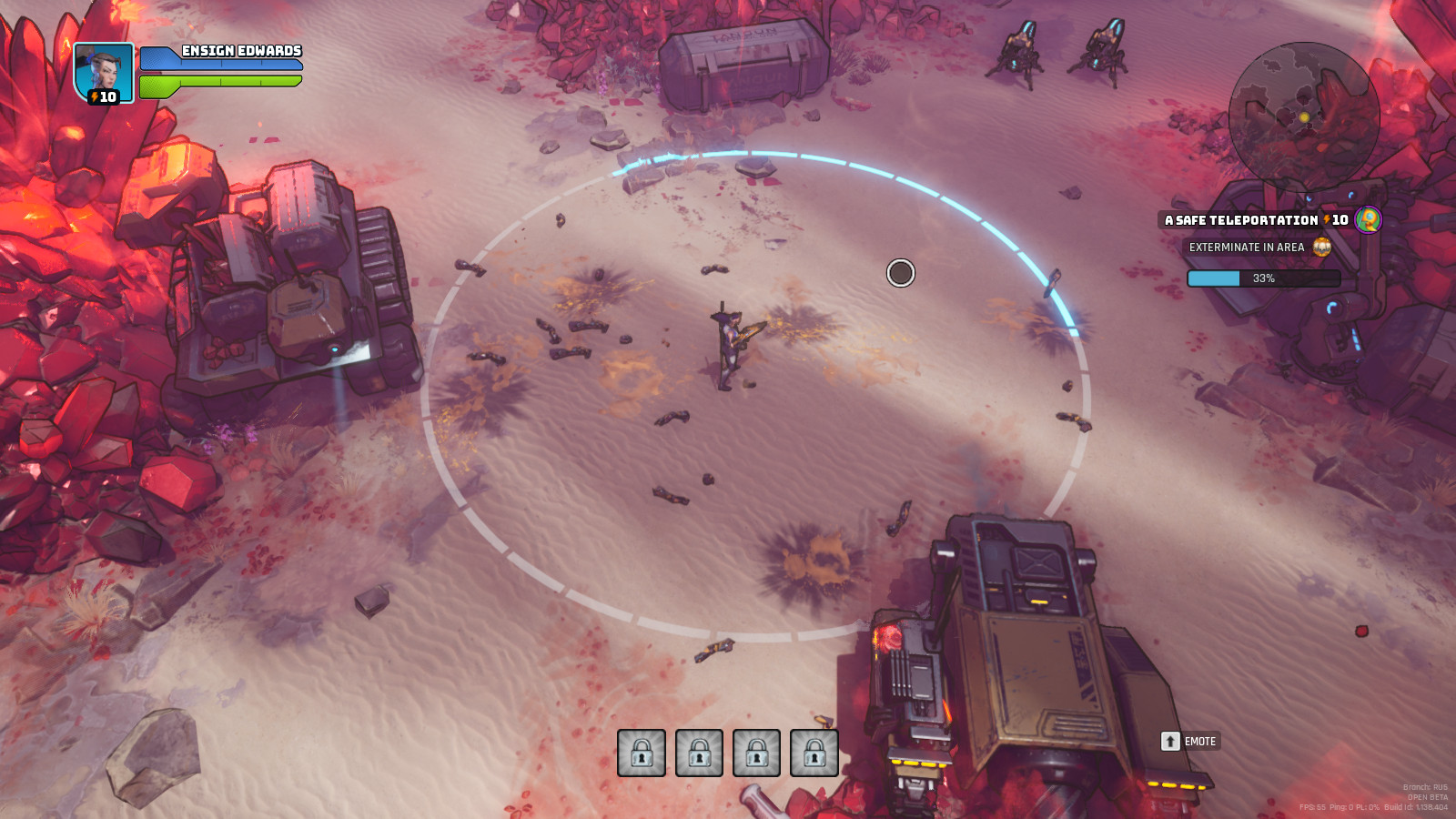 On that note, what I played of Space Punks did feel pretty polished by beta standards. I did encounter an issue once where it took several minutes for my next mission to launch, but otherwise I encountered no bugs or hiccups.

To their credit, the developers are not yet monetizing the game, making this much of a true beta than we usually see these days. Space Punks is free to play, and while there is a cash shop, it’s currently disabled, so you can’t actually buy anything. Looking over the tabs, I found its offerings fairly tame — just the usual round of cosmetics — with one noteworthy exception.

Similar to the defunct Marvel Heroes, Space Punks locks you into your first character, and trying others requires you to spend real cash (or grind out currency in-game, which will presumably take a long time).

I am generally fine with almost any form of mainstream monetization in games. Even lockboxes and pay-to-win gear usually earn naught but a shrug from me, but this is one thing even I can’t stand. Your choice of class or character is by far the most important one in an RPG, and I can’t imagine anything more self-destructively greedy than charging people just to reroll. It absolutely killed any chance I might have had to enjoy Marvel Heroes, and seeing it in Space Punks immediately soured me on the game (even more than I already was).

That said, on reflection, this may be one area where Space Punks‘ thin RPG elements work in its favor. In a traditional RPG, your choice of character is everything, but here all it does is determine your appearance and a handful of cooldown abilities. Your experience of the game isn’t going to change that much when you switch to a new character. I still don’t think charging people to try other characters is a good idea, but it’s a lot less harmful than it would otherwise be.

All that said, none of that really changes the fundamental problem with Space Punks: It just isn’t very fun. It’s a comedy that’s not funny. It’s a game with no real depth. It tries to mix shooter and ARPG gameplay, but it doesn’t do a particularly good job of either.