Warning: After the break is a shocking depiction of human nudity and the bravado of a squirrel that seeks to save you from nightmares for the next two weeks. It is all thanks to that online weirdness generator called Final Fantasy XIV and beloved reader Skoryy, who is incredibly quick with that screenshot key.

This is from Skoryy’s private photography gallery entitled, “Random MMO Funny Faces.” Gaze in awe and dumbstruck horror after the break, then read on because we’ve got a whole bunch of interesting player shots for you to admire when you tire of trying to peek around that bushy tail. 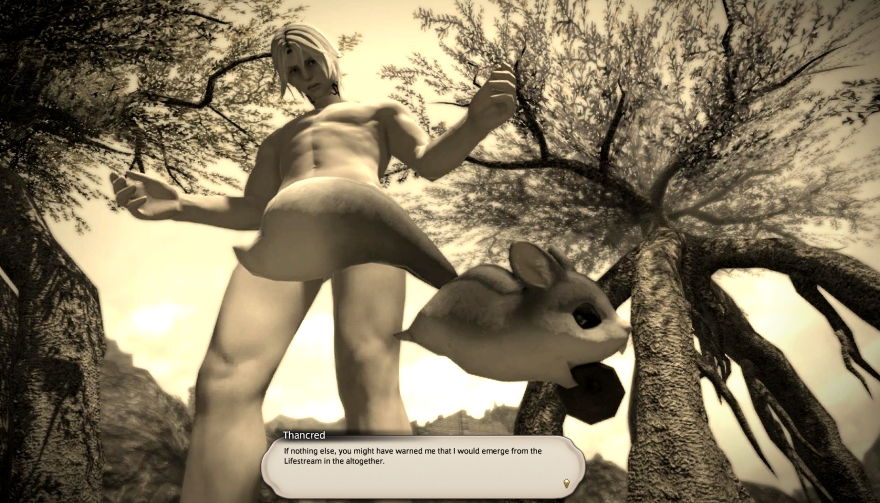 We saw some interesting responses to last week’s “impossible or inexplicable” screenshot challenge, such as this skybox from World of Warcraft.

“Something inexplicable? Yeah, it’s called the Roche limit. Shouldn’t this be a thing here?” Utakata asks.

To save you the trouble of Googling it: “The Roche limit is the minimum distance to which a large satellite can approach its primary body without being torn apart by tidal forces. If satellite and primary are of similar composition, the theoretical limit is about 2 1/2 times the radius of the larger body.” 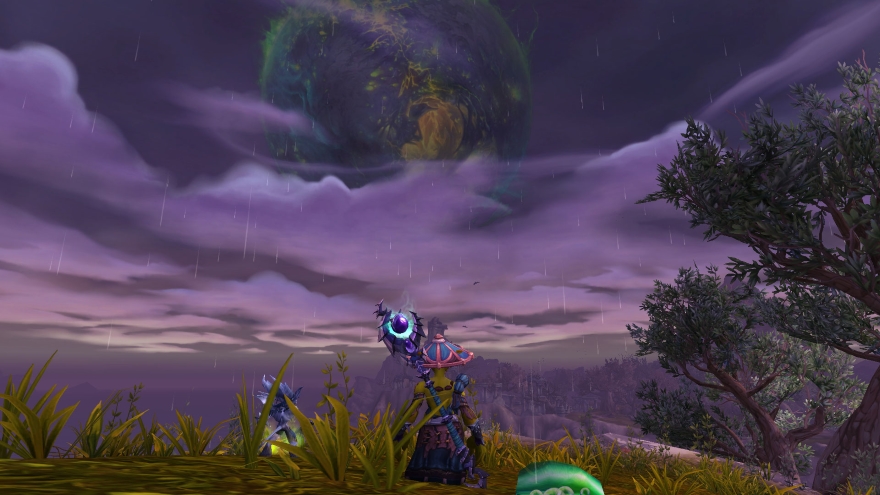 “I just used Neverwinter’s demo tool to grab some snaps of my Dragonborn in action,” said Boom.

OK, this sort of stance should be accompanied by a weighty and well-rehearsed speech, a transformation of a loyal pet to a suitable battle-mount, and children across the world cheering at their TV screens and yelling at you to go give the bad guys hell. 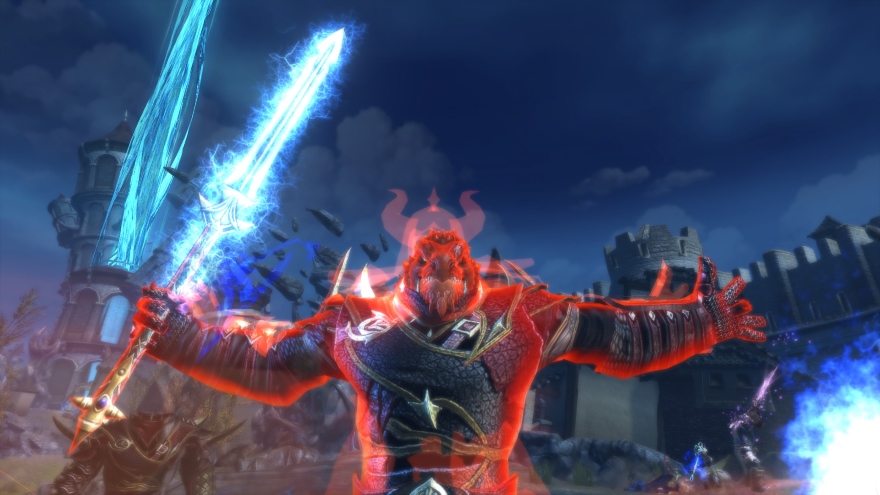 “Whilst playing ARK, I came across a… puzzling sight,” wrote William. “Of a Megalodon, head down, booty up, as it were. When approached, it seemed content with whatever the hell it was doing, and in true ARK fashion, I murdered it and ate it. But now I feel compelled to faceplant the seabed as well.”

Did we just publish an article with the phrase “head down, booty up” included in it? Yes. Yes we did. 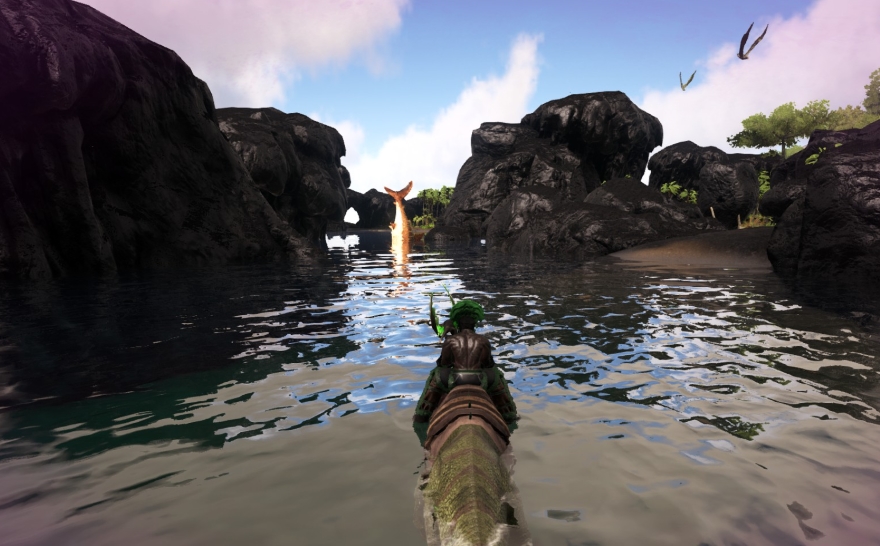 And yet more unexplained sights in MMORPGs, this one from Camelotcrusade and Star Wars the Old Republic:

“Moving on to unexplained phenomena. Can you really project black light (i.e., darkness)? And how would you make a black laser? If a laser is light, how can you make something which somehow negates the presence of light? A machine can’t output nothing. So what is it outputting?

“Wow, did I go down a rabbit hole trying to answer my own questions on the internet before I posted this. I just spent an hour reading about passive darkness, shades of black color (including the influence of material and shine), the annihilation of light (or ‘active darkness’) and black holes. The answer, by the way is absolutely not, probably not, yes*, and no, depending on exactly what you’re asking.” 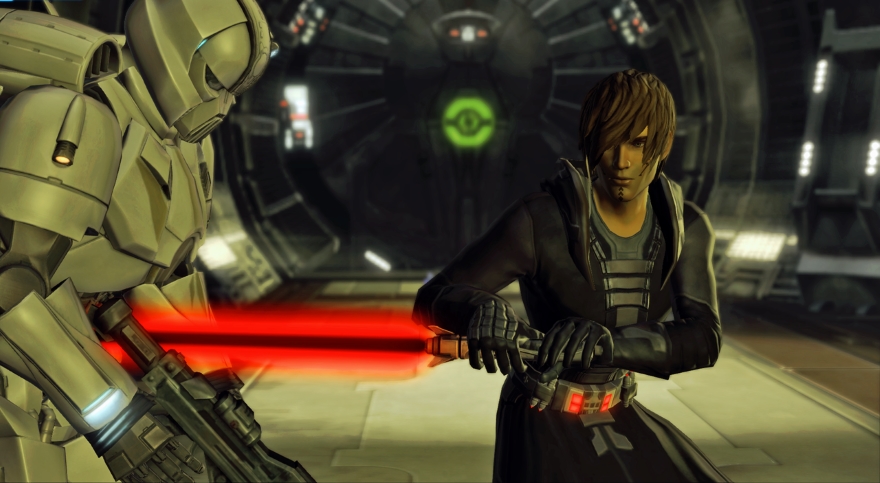 What’s an NPC that you love to hate? Smack his, her, or its face on a screenshot and unload about what you loathe about this particular character!

goofing off in Second Life

I don’t know if this comment will remain, but still I must say… Even if the picture did fully show a nude male, dongs aren’t that shocking :P Nor are they nightmare inducing.

I don’t know if the writer was being sarcastic (probably?) being that there isn’t anything more than what you see at family beaches. It’s cute that it gives the illusion of nudity, though there is nothing actually shocking there.

“Dongs arent that shocking”…
Not if you overheard the conversation I just caught between a pair of female employees, talking about a recent tinder related experience one had this weekend…
I’ll say no more :-p

My time-displaced 23rd-century starship captain in Star Trek Online wonders what strange mysteries he might uncover on this new world.

The redshirts behind him simply wonder if they’ll make it back to the ship alive. :-)

(Note for the nerdy and sharp-eyed — Cryptic provides an array of ship-specific patches, like they used to use back in the original series, for C23rd captains and crews. My captain’s starship is the Perseus, so the patch you’re seeing is a stylized medusa’s head. Also, the standard “command star” on the patch has been swapped out by me for the vortex swirl design STO uses to designate a temporal agent captain) /nerd

An unexpectedly scientific One Shots.

I confess, I let her die back in the day, in the end I just walked away and cancelled the quest.
Worst. Escort. Quest. Ever.

Oh, she was a frustrating little idiot!

I wanted to pick her up and carry her out of there over my shoulder. Silly hobbit!

“’The Roche limit is the minimum distance to which a large satellite can approach its primary body without being torn apart by tidal forces. If satellite and primary are of similar composition, the theoretical limit is about 2 1/2 times the radius of the larger body.’”

To clarify, my Gnome based guild had a two day debate on this subject. To which my lore savvy guild lead suggested is what we’re looking at is jerry-rigged Fleet of Worlds sized Legion Portal to which Illidan Stormrage (speaking of annoying NPC’s) had hacked to create the appearance of a planet, with none of the gravitation chaos an Earth sized body would have if suddenly appeared between a host planet and it’s moons. To demonstrate this, my as for mentioned guild lead noted that Argus is face locked when observing it from Azeroth. However, when Azeroth is observed from Argus, it is not.

Here’s a clearer picture of the offending planet just over High Mountain and my pigtails. (Please see image attached.)

PS: Another thanks for plugging one of my screen shots again, Mr. Justin. <3

I had a pretty good Junkrat play of the game this week.

I also had a hilarious Torbjorn PotG, where Ana sleep-darted me through most of it, but Overwatch didn’t tag it as a highlight, so I lost it before I could save it off.

LOTRO Legendarium: How much value does a VIP subscription offer these...

WRUP: 101 uses for a hammer edition