Just a word of neighborly advice, but if you ever find yourself this near to a black hole, you might as well take screenshots for all you’re worth, because you’re about to be squashed into an infinitely small smear in just a few minutes. Might as well create a killer Facebook profile pic before you do.

The infinitely smeared Ryuen sent this one in from Elite: Dangerous: “Since I lost most of my old screens years ago in a hard drive crash I thought it fitting to provide of an image of my CMDR looking at a black hole. He is, no doubt, pondering the reliability of spinning rust data carriers and the ease with with one might lose a backup CD.” 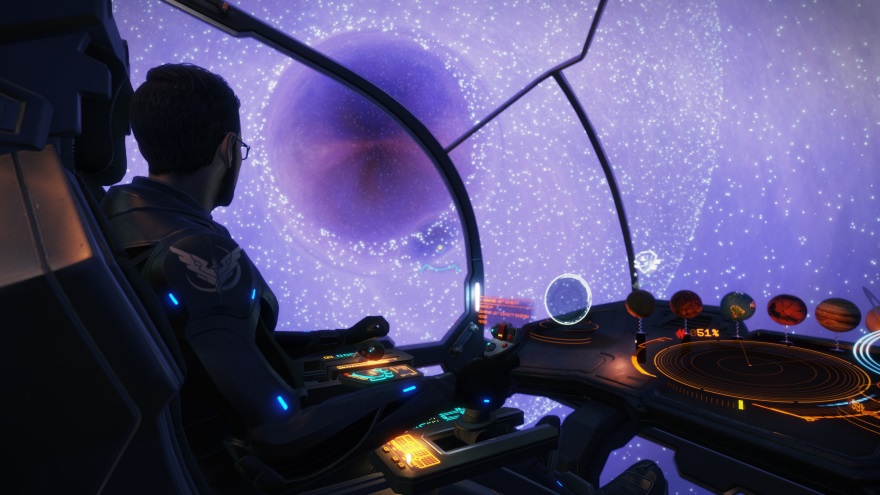 Everyone say hello to Louie, who enjoys living on the wrong side of the cyber-law!

“My TERA days are long behind me, but this screenshot from 2013 will always be one of my favorites I’ve taken in an MMO,” said Louie. “It was one of the very few times I’ve gone out of bounds in one, and it was entirely through painstakingly testing jumps on a mountainside because I just really, really wanted to explore the area I was in from a different angle. TERA’s ability to have the combat it does but also retain the size and scope of its world is something that will always continue to impress me, and I adored being able to see this view of ‘in between’ areas that the player was never meant to see because it not only let me appreciate a unique area, but also let me enjoy the sheer scope of the world. Argh, maybe I should install it again…” 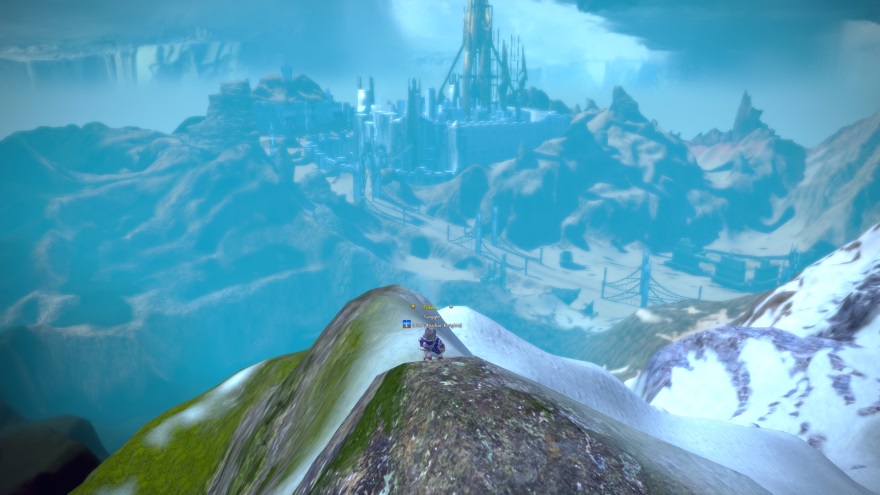 “My store of old screenshots is fairly small since I’ve never been one to take a lot of screenshots unfortunately. Still, I do have a fair number of old screenshots from my days in EverQuest back in the early 00s that have survived several moves and transfers between computers and backup discs, etc. Below I’ve selected a few from the in game wedding our guild leader Caldara and her in game beau Maulk had. Sadly I don’t really recall much about the event other than it was held on an Aviak platform along the shore (or out in the middle of?) Lake Rathe(?) (fuzzy on the zone name after all these years).”

Truly, wedding technology was far too cutting-edge for our world back then. I too had many floating spectators at my own nuptials and had to tell everyone to turn down the texture resolution because of lag. 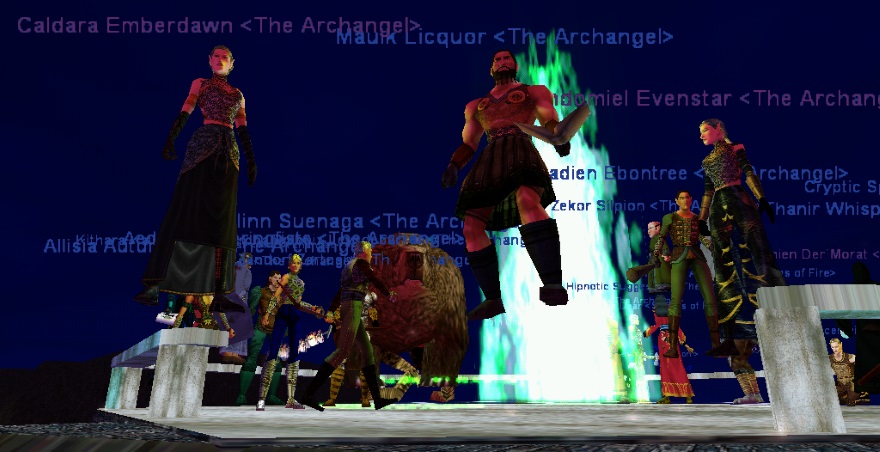 Hikari has this City of Heroes story to share:

“If there was a shot that could summarize the end of Spectra-Lass’s story in Paragon City, it is this one. At the end of her journey, she had grown from fledgling hero who found her power embuing Spectra Bands by what seemed random chance, to the leader and hero of one world’s most elite superteams.

“Along the way, she had learned that her ‘Bands’ were actually a precursor to the type of weapons used by an intergalactic police force. They had been given to the mortal mate of the immortal progenitor of the Power Bands. They were imperfect and as they tapped into the emotional energy of the universe, they caused great fear and envy among those of her own people. When she was slain by the beings she was meant to protect, the heartbroken progenitor abandoned the project and hurled the Spectra Bands into the void.

“They would be found several millennia later by a young girl from Kings Row who was just trying to hide from some rampaging Lost in a construction site. In her deepest moment of fear, anger and impending loss, they found her. The rest is superhero history.

“This shot was taken just before the impending cataclysm that would forever shut her dimension off from the multiverse. The blue suit was new. It was the uniform of the Power Bands. After years of working with them and proving that a wielder of the Spectra Bands could be trusted, she was made an official Power Band of Earth. Standing vigilant with many other heroes in Atlas Park (AP33) she waited to face the evil threatening her home one last time.

“Not quite The End.” 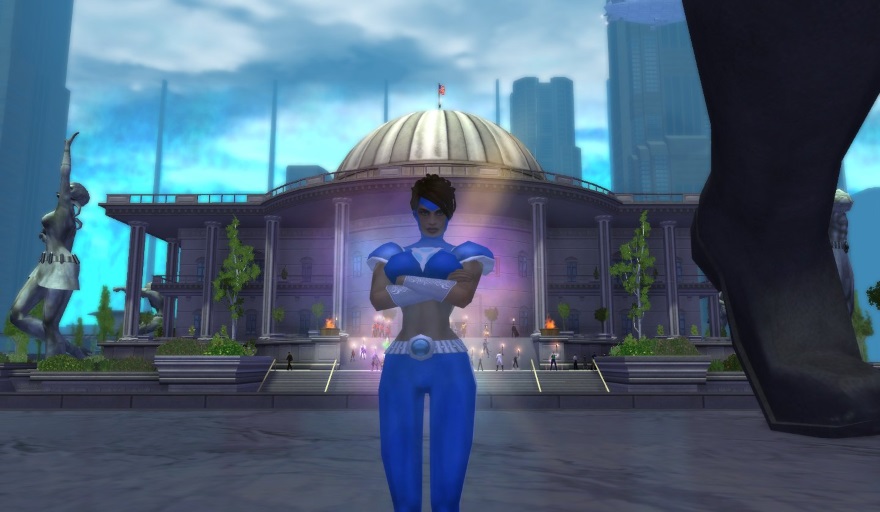 “ArcheAge leaves me the most nostalgic, outside of SWG,” posted Toy Clown. “In spite of the game’s many problems after release, we had a blast with it for nearly a year. The pic with everyone stuffed into a small house was a RP scenario where we had to squish inside due to griefers coming by the cross-faction scenario and killing everyone. It became humorous to see how many people we could fit into the small house.”

Hey sometimes the best Christmas present is to give gankers a tightly-packed room of targets! It’s almost heart-warming! 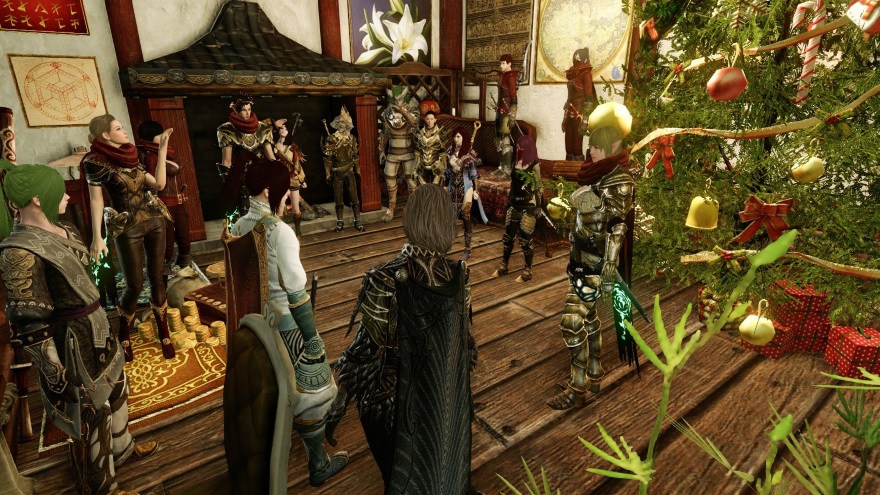 If there’s a building that I can go into in an MMO, rest assured that I do it, because you never know what might be waiting inside. This week’s screenshot challenge is to share interesting and quirky interiors that you’ve found while questing. Bonus points if you find out-of-the-way locales that were created not for a quest but just because!