I suppose we all need to accept the new reality, which is that we’re only starting to see the tsunami of Final Fantasy XIV screenshots in this column thanks to the Bringers of Shadow expansion. Hug your favorite moogle tight, because this promises to be a long road indeed.

At least we can stare at some pretty pictures in the meanwhile. And I do mean stare, because Scott has a great way to lose a blink-off in any situation. “Here’s a tribute to bored, disinterested youth in the statues from FFXIV’s last leveling dungeon,” he said. “You can just HEAR these ladies complaining about how boring Battle for Azeroth has become.”

That’s your interpretation. Mine is that they dared to look at the MMORPG reddit and instantly became petrified by the horrors they saw. 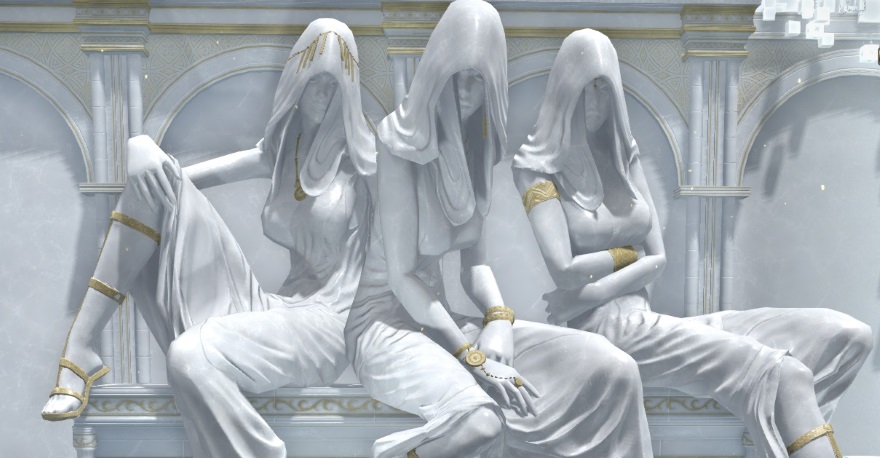 Yeah, so I wasn’t kidding, we had a FFXIV bonanza last week in the comments. And look at that, a new challenger appears on the scene with the mighty powers of nature’s most fearsome beast: a humanoid lagomorph. Of which there are only females because reasons.

“If you’re looking for an example of big vs. small, how about a Bunny vs. a Dragon?” asked Ecrulis. 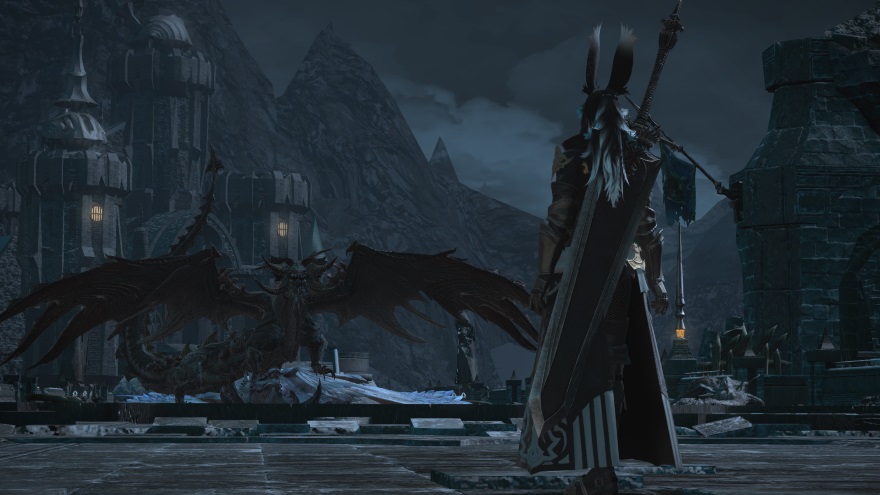 Star Trek Online gets a good amount of representation here in One Shots because this game still looks way better than it has any right to be. Has to be all of them “pretty spaceships,” as Natalyia puts it. 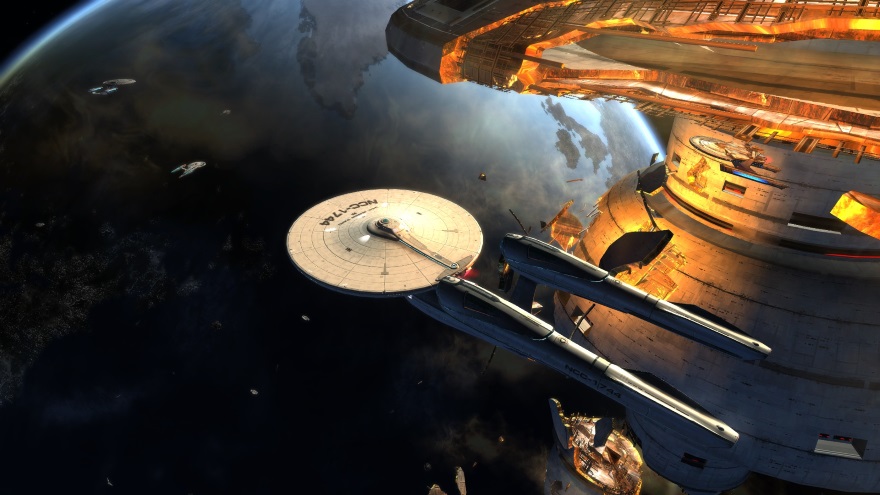 “Romulans are by no means a short people, but Star Trek Online’s playable Gorn can absolutely break rendered cutscenes,” posted Daniel. “My eyes are UP HERE, buddy.”

This is the most amazing thing I’ve seen all week, and I’ve seen a bunny try to gnaw on a dragon’s leg. 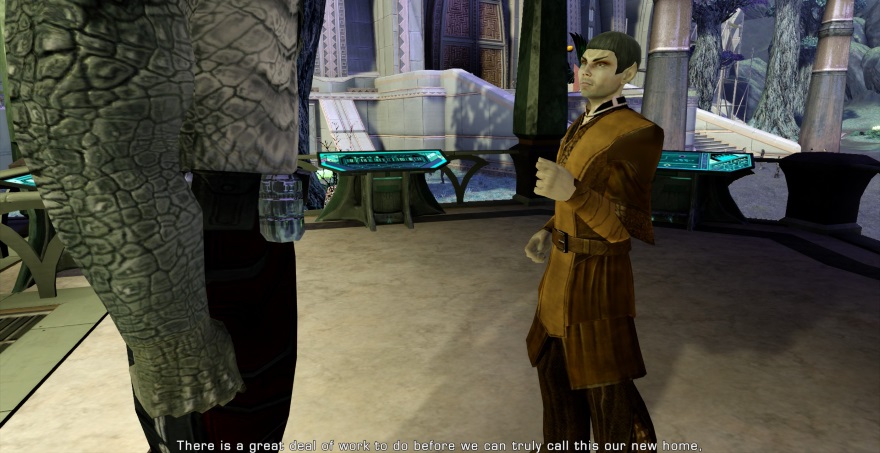 Speaking of dragons, here’s Hikari: “Guild Wars 2 does pretty good with scale. Big vs. small requires a few spoilery images out of context, but it’s been two months. You had time to play!”

Is it really a spoiler at this point in time to say that Guild Wars 2 has dragons? Like, if you took the dragons out of that game, I think it would fall apart because of all of the plot holes. 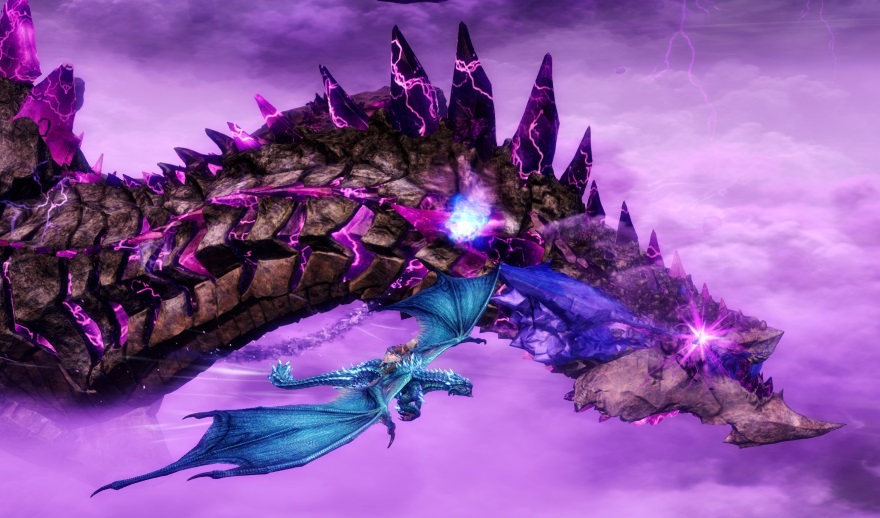 And reader Josh is going to close us out this week with his brand-new Viera. So why not turn this into a screenshot challenge and ask you to post a picture of your favorite MMORPG race of all time? 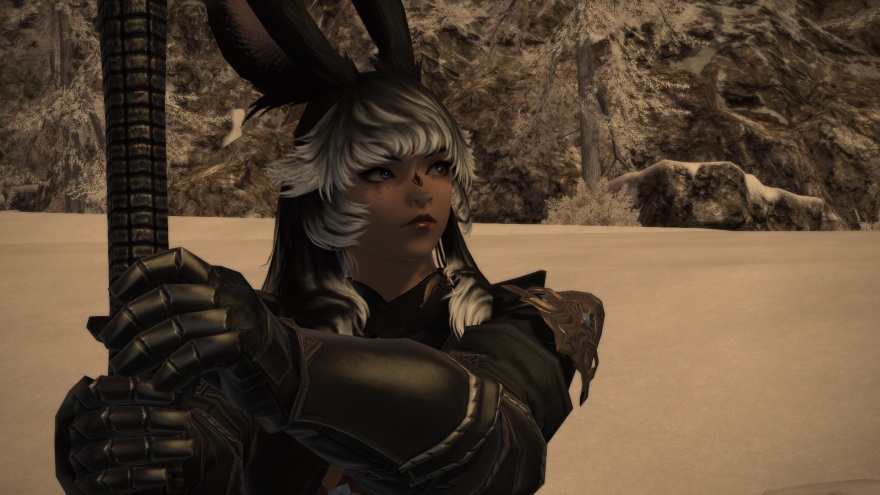 it’s not as shady as it looks folks… we’re hanging at a clothing store. a badly lit clothing store. in a space station carved into an asteroid… that is the home of anti UEE insurgents and criminals of all flavours.

I think folks would get tired for me posting my favorite playable species, but here we go…

So you are playing Sith Sith :-P

Quite fond of Dunmer.

We had a really cool array of submitted pics last week, for sure!

Here’s my latest effort to offer The Justin Show game pics from something other than Star Trek Online all the time.

I pretty much missed the advent of asian gaming in the West, because of what I was doing with my life at that time, so I don’t have any automatic affinity for asian games. as such.

I have been playing the PS4 rpg Star Ocean: Integrity and Faithlessness on and off for a while now, and I like it.

It’s a weird sort of science-fantasy game, in that it starts out very much a medieval-fantasy type rpg, and then slowly shades into science-fiction style content as well.

The culture gap between eastern and western game sensibilities does result in some supremely WTF? moments, however.

I find it’s best to just “roll with it” when, (for example) on the grim war front, giant rabbits just happen to be wandering around, babbling nonsense. :-)

Also, I do sometimes wonder if the game’s translators are genuinely oblivious to English language nuance, or whether they’re just effin’ with us western players for the lulz.

Name me any other non-asian game where you can find a “race” of bad guys actually called “Great Scumbag”?

They look more like demented gnomes don’t you think? :-)

There’s a sort of “alien outsider” vibe to elves, when they’re done with care, which appeals to me.

Cheers, all! Thanks for sharing your pics!

Best race ever? Phht. (not my toon, but I’m playing FFXIV so I’m not going to dl and install EQ2 just for a single screenshot of my character)

Favorite race: I just gonna say Bosmer, so that I can sneak in a fresh screenshot from my ESO play session this morning:

Fave race? Hmm. Well, that is not as easy as it sounds. I’ve played all the standard fantasy races for the most part. I’ve been a human, an orc, elven in various degrees, a humanoid (eg. Cathar), a gnome, a sith (as in the race), a Mirialan, etc. etc. etc.

And so with that in mind, my fave race is the BnS Lyn. These humanoid woodland creatures are more cuddly than they are menacing. They are too cute and easily dismissed. BUT that is a mistake because they are great warriors no matter your combat preference.

And that juxtaposition, cute woodland diminutive badass vs. giant ugly monster from hell is too delicious to pass up.

Here is my Lyn Rolie. He may need a new prescription for glasses, but should you cross him, he will put you on your ass.

You can hype his badassery all you like, Rafe, but I suspect I already know how to defeat him.

But seriously, my friend, thanks for the pic!

Lol! Ah, but then you have his fighting cat to deal with. Lol.

With a well place Pyroblast, I am in no need to get into a Human’s dead zone like that. <3