Other than the pre-con jitters of devs unsure what to expect or how things would ultimately go, you wouldn’t know that ExileCon 2019 was Path of Exile’s first fan convention. The one-day event came off like a seasoned endeavor, bursting with announcements, panels, streams, interviews, hands-on gameplay stations, and even a custom-tailored interactive ExileCon trading card game for players to get hooked on. There was also a mini museum of art to peruse, autographs to acquire, swag to be had, and a merch shop full of goodies players could get.

END_OF_DOCUMENT_TOKEN_TO_BE_REPLACED
If you couldn’t make it this year, don’t hold your breath for one next year: Managing Director Chris Wilson doesn’t see this becoming a yearly event, but it could be an occasional event for big announcements. Even if you were there live, it was impossible to see and do everything, as I found out myself. In either case, here’s a glimpse of the cosplay, the card game, the camaraderie, and the content — from prose to pictures.

And that’s how you make announcements!

From a fan perspective, will all the travel and expense be worth it? That’s ultimately an individual decision, but I feel that Grinding Gear Games was anything but stingy on its plans for fans. ExileCon was a production — and a production done well at that. It all started with an appearance from Einhar to get the crowd excited. As one of my favorite characters — and from my favorite league — I loved getting to see Einhar in the flesh. He definitely brought some fun to the start of the con. Amusingly, it seemed as if many fans weren’t quite sure what to make of things when this hunter hit the stage, but they quickly got in the PoE spirit. (No audience was harmed in the filming of the intro, despite the nasty look of that crossbow.)

And then the reveals started and the ruckus of the crowd continued to build. Players already knew that a multitude of announcements were going to happen, from 3.9 and its league to the mega-expansion 4.0 (which we now know is Path of Exile 2). But GGG didn’t stop there. After dumping a load of info on the audience, complete with trailers and footage, devs also slipped in a humorous little blurb about the upcoming mobile version of the game in what first appeared to be a prank but turned out to be real. Next up, almost like an afterthought, came the Mac version announcement. Many more panels and interviews followed the keynote, keeping inquiring minds busy learning tidbits of all the new PoE goodness coming.

I have to say, in an environment where mobile announcements don’t seem to go especially well lately, Grinding Gear Games pulled it off perfectly. Give the fans a ton of what they want, then also offer them another way to play. It was a well-executed segue. If this isn’t an example of the studio watching, learning, and listening to fans, I don’t know what is.

I am going to say one of the things that was both most unexpected and most impressive was the Path of Exile card game that GGG set up for the attendees. I learned that Carl de Visser created the game, through he was unable to be there in person to see the fruits of all his labors. Congratulations on a stellar idea and thank you so much for your work!

What happened was all attendees received the beginning of a deck, a few cards and a sleeve. Devs were then dressed in T-shirts that denoted them as a specific mob, with everything from low-level zombies to guardians and ultimately Wilson as the Shaper. Players used the cards to battle the dev mobs, with equipment losing durability but gaining a random new card with each defeat. There was a crafting station to upgrade items if you had the right currency cards. Everywhere you went there were crowds congregated to trade, buy, and sell cards with each other. The con Discord even got its own trading channel. Players fought, traded, and worked their way up to the maps in the atlas until they could confront the Shaper. People were going nuts over the game, many ignoring everything else on display in their pursuit of wins. And Wilson said was surprised at how fast players were moving through the difficulty levels on their way to face him. 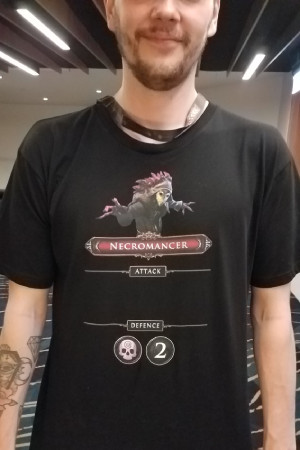 I personally only had the chance to battle a few mobs (I was there chiefly to work, after all!), but I really enjoyed the game. I might have a larger collection of cards now thanks to the generosity of others, and I’ve taken some pictures of various dev mob shirts that I hope to make into cards as well and make a more complete game. (Apparently asking to take pictures of the chests of everyone I met wasn’t nearly as weird as awkward as it should’ve been because they’d been asked the same all day!)

I did ask GGG if the studio would consider using the graphics to make the mob cards and sell them as post-con loots. I am sure that I am not the only one who wants them! I totally want to make a more playable version of the game to share with friends and family.

If ever there was a time I could wander Wraeclast for myself (minus dodging blood-thirsty mobs), this was it. The ambiance of the event was suitably dark like PoE, with a reaper to greet fans in front of a tree filled with hanging severed heads. Twisted trees sprouted elsewhere as well, and tangled roots held potential PoE 2 players back until it was their turn. The atlas stood proud, waiting for players to enter maps. And then there was the cosplay.

Einhar wasn’t the only one dressed for the occasion. While a large selection of fans were sporting Path of Exile shirts or rare hoodies from an old supporter pack, some fans went even further and did the game proud with wonderful cosplay. Thanks to each and every one of them for their work and for bringing more Wraeclast to life for the rest of us.

One of my very favorite parts of attending new cons is watching the reactions of the devs from just before the event starts until everything wraps up. Understandably, they start off nervous. But I already knew something they don’t yet: They were about to be rock stars. When fans get to meet up with their game-creator idols, there is excitement, as we’ve seen from so many other MMO conventions for other games and studios, from Square Enix and Digital Extremes to CCP Games and even Blizzard. Wilson remarked a bit incredulously how he had trouble moving from one room to the next to meet with us because he kept being stopped and asked for pictures and autographs. Devs who never thought they could ever be on stage felt so welcomed and appreciated that they joined in and shared their knowledge to plenty of cheers. At the end of the day, the line for Wilson’s and Technical Director Jonathan Rogers’ autographs kept growing; every time I thought I saw the end, more popped in. Welcome to the limelight of fan adoration!

Toward the end of con, I asked a few of the developers how they felt it went. The consensus was it was really fun. Many were up for a repeat. Let’s hope they do do it again! I’d better start saving now.

Disclosure: In accordance with Massively OP’s ethics policy, we must disclose that Grinding Gear paid for our writer’s travel to and accommodation at the ExileCon event. Grinding Gear has neither requested nor been granted any control or influence over our coverage of the event.

Really enjoyed your coverage MJ. From my seat – it looked like the best con for any game in a number of years.

This looks like an awesome con, i wish someone would make a Starcraft inspired game… 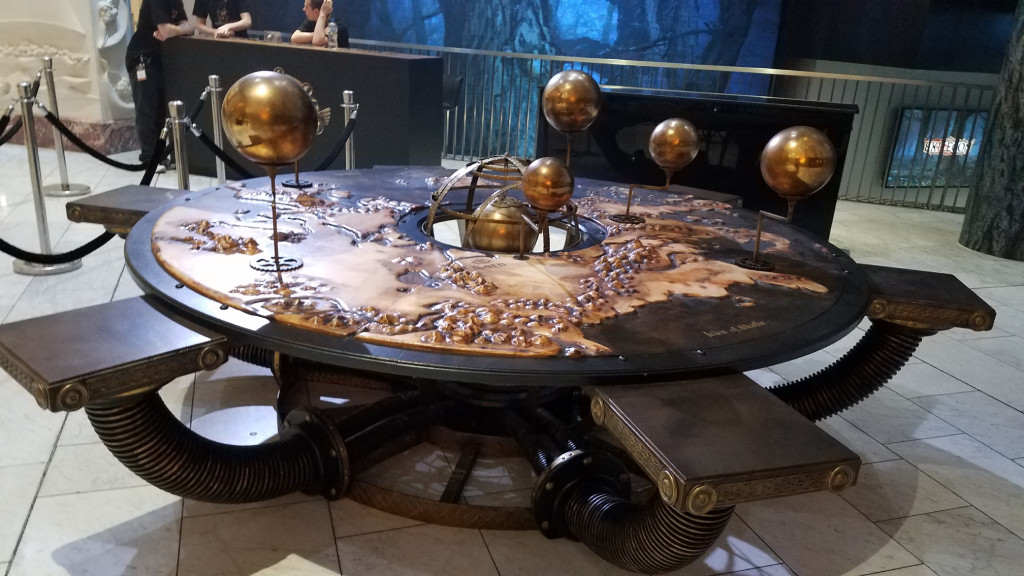 For that? You make room., or even make a room.

On a more serious note, I could see making adjustments so that the “seats” are a bit lower (and a bit more comfortable), flatten the terrain, and now you have a neat dinner/gaming table.

Man, when even a technical director is a rockstar worthy of autographs…

Seems like a ton of fun and like it was super well planned/executed. Glad it went off well for all involved and attendees had fun.

I like seeing these non-annual conventions every now and then. Doesn’t need to happen EVERY year because…well…there may not be something major to announce EVERY year, but they’re a nice venue for some major announcements and a good way to “give back” (quotes since folks paid to go and all) to the community and let them have a different type of fun.

I still need to catch up on some of the specific mechanical changes coming with the next league and PoE2. Gotta get to working on new ideas for builds…or I’ll just copy another build and tweak it a bit like I usually do because I’m lazy…and then let my brother yell at me for doing dumb things and have him fix it all : D

I am so excited to try a ranger with totems/ballistas. I am finally being seduced away from my Witches!

What a great recap MJ! Sounds like you had a blast there.

Guess I’ll have to dip my toes back into POE after all. :)

It was great fun, even if I couldn’t do the card game much and missed half the panels (they all sounded great to cover, but how do you attend two at the same time? I haven’t figured out how to clone myself yet).

From what I saw it looked like everyone had a blast and it’s seems to have gone well for everyone.

Not sure I would have survived so many hours in a plane to get to New Zealand even though that is a trip of a lifetime. So was happy enough to catch the free streams that GGG did.

I survived it with a disabled 5 year-old, so I am pretty confident anyone can make it! Also, I now know they have these three seats you can get that turn into a couch — perfect for 2 people. Wish i knew before I went, and will look at getting one if I can go back someday.

Its cool that you’ve learned all the juicy info about PoE2 and PoE mobile, but we’d like to know something too…

ps/ nvm, missed that PoE2 hands-on. On it

There wasn’t too much about mobile yet, and the only other discussion on it had to be missed to cover another more pressing topic. I’ll pass along anything more I learn!