My installation of Star Citizen isn’t working right, and Elite Dangerous has some neat things going on but not the right kind of hooks to get me truly invested, so that leaves me with Star Trek Online as my “go to” for when I crave a space MMO. That sounds a bit like water in a desert, but after my time with the game for this month, I have to admit that it’s not really a terrible choice all things considered.

END_OF_DOCUMENT_TOKEN_TO_BE_REPLACED
A great deal of that certainly has to do with having my husband along for the ride, certainly, but the choices made for me during this run, both by you fine folks and general guidance from my husband, have really made my return trip a lot more enjoyable. 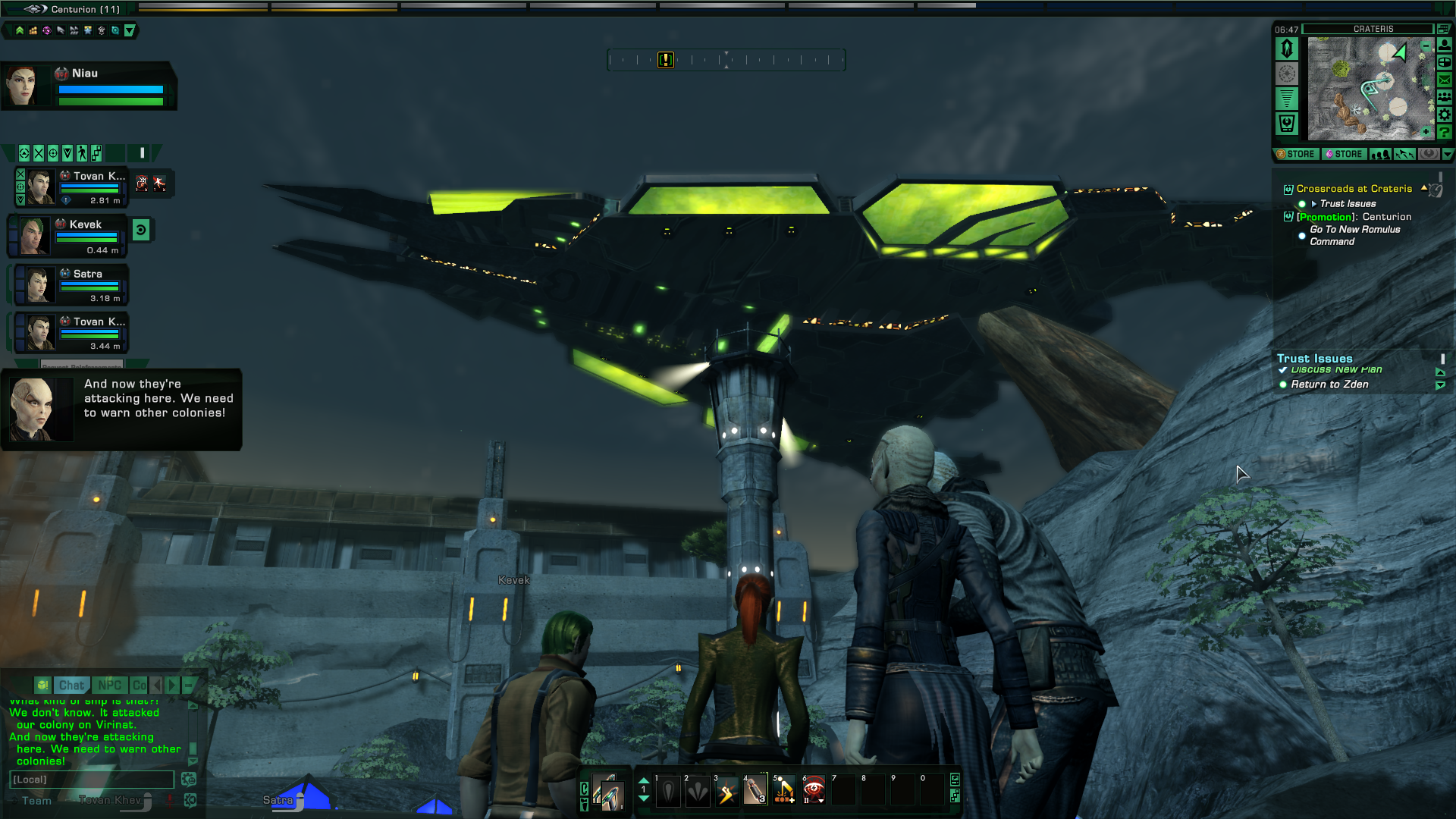 From the jump, the Romulan racial story has had a bit more interest and intrigue than I recall getting from the base Federation story arc. I’m not exactly riveted by every step the story takes necessarily, but I also think the general route of a race trying to fight off extinction and reclaim its standing in the galactic community makes for some far more involved fiction. Though, I have to admit, I am missing out on hearing Leonard Nimoy congratulating me with every level up.

The choice to go Tactical is starting to grow on me too, at least in terms of space combat. The choice of weaponry has a lot to do with that, naturally, but there are a couple of other features that seem to be specific to the Romulan Warbird or the Tactical ship style that edges out my original selection of a Science path and vessel. When the two of us cloaked outside of active weapons range, moved to position, de-cloaked, and opened fire with roaring rapid fire blasts, it felt really good — a spaceship equivalent of a rogue class’ alpha strike.

Of course, that’s really a feeling that seems specific to space combat, as the differences between Tactical and Science in ground combat were practically non-existent. In fact, the less said about ground combat overall, the better. Which is a shame, since Star Trek is as much about what the characters do personally as it is what they do while aboard a starship. At least the mouselook control scheme and the minigun have found some blood in the stone here, but it still remains the weakest part of the Star Trek Online game. 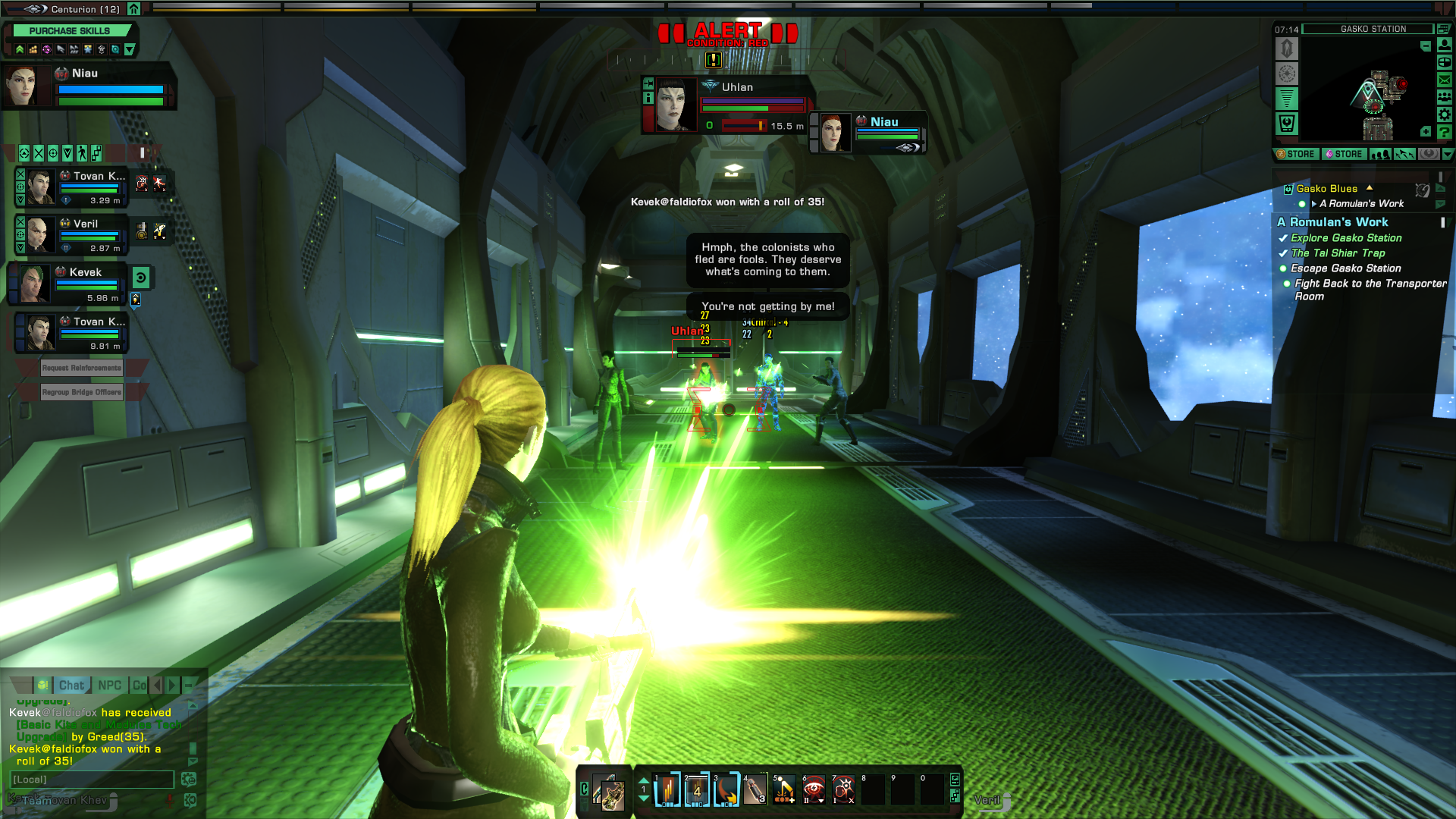 I guess one of the barometers of whether I’m having fun or not — especially in a free-to-play game — is whether I’m moved to want to spend money, and Star Trek Online has been fun enough that I’m considering buying up a T6. The setting is the sauce for many, but even for someone who hasn’t really dived deep in Star Trek anything (TNG was my first series, followed by Voyager, and both of which I’ve only watched when there was nothing else on), there’s plenty of enjoyment to be gotten from the game. It’s got some UI problems, and the game’s engine does not lend itself to in-game narrative cutscenes at all, but the jank to enjoyment balance leans enough on the latter that I can forgive the former.

And, again, it’s kind of the only space MMO that really has gotten me invested to a great degree. So there’s that. 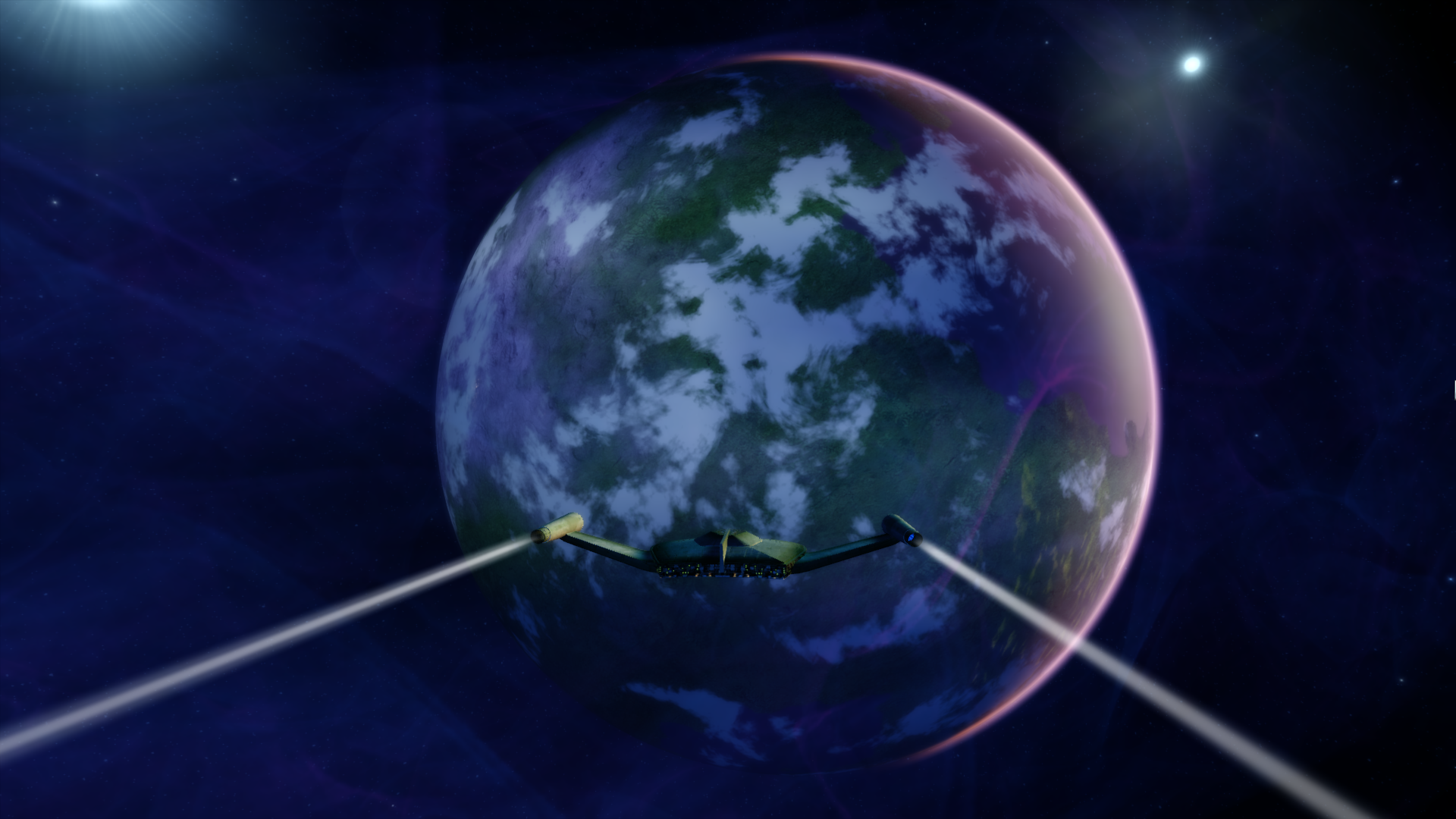 Of course, that’s not the only space MMO out there. We still have yet to take our first steps in EVE Online, which is this coming month’s voted-for choice. I’ll be entirely honest with you all, I’m not relishing in this choice. I’ve already got anxiety gremlins tackling some of the higher level stuff in my home MMORPG, let alone being a new arrival to the presumed hell blender that is New Eden, but sometimes you have to just hop into the frying pan to see if you cook or burn, and so that’s what will be happening.

That won’t be happening, of course, until we make some decisions, and that’s where the polls come in to play, the first of which being an easy one: What race should I join?

Which race should I choose for our EVE adventure?

Next is the question of initial focus. I’m certain this will shift over the course of play, but you have to start somewhere, both in flying and in spending those skill points, right? And, yes, you will notice that my activities aren’t PvP focused but mostly because it (presumably) isn’t smart to go picking a fight when you just arrive. In any event, I’ll do my best to read guides (and likely whimper at Brendan’s feet for his advice) in order to try to make smart decisions here, but what should we start off with?

What should be the first activity focused on?

Finally, there’s the question of the type of Clone to become: Should I try things out for the entirety of this run as a free-to-play Capsuleer? Or should I cough up a bit to go Omega and fully unlock things?

What kind of Clone should I become in EVE Online? 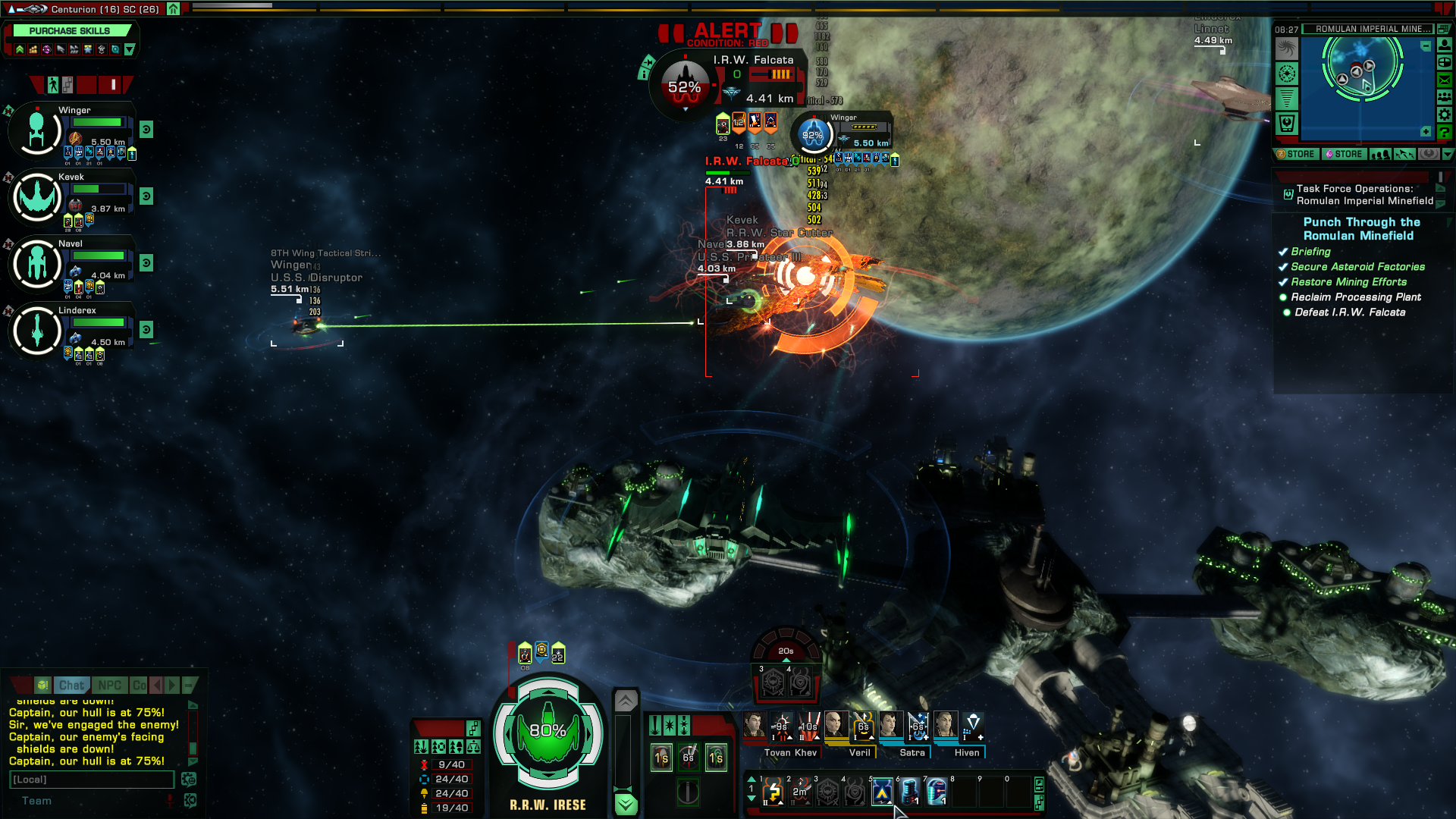 Polls wrap at the usual 1:00 p.m. EDT time on the usual Friday, June 5th. In the meantime, I think I’ll see if my husband is up for a few more Romulan missions. Maybe enticing him with a purchased ship will sweeten the deal a bit.

Question not asked but I’ll answer, join up ASAP with a corp dedicated to helping new players get into the game.

Not sure who is still around, EVE University, Brave Newbies and I’m sure there are new ones since I last checked.

Tell them you work for MOP they’ll probably roll out the red carpet for you.

The polls should have each had an additional option. “It doesn’t matter what you pick, you’re going to die anyway.”

Science is actually my bread and butter for ground combat. One of the skills puts an AOE dot on enemies, and you can get an upgrade pretty easily through one of the reputations. It will just rip through borg, which are otherwise annoying to fight unless you go melee. With tactical you have to spend more time aiming at things.

Starting race doesn’t mean much in EVE. Very strongly suggest that you go Alpha to start just to make sure you can tolerate EVE’s user experience. Expect to be messed with regardless the space you live in.

If you like space games, used to like Star Control series and dont mind a bit of humor in a games design, then you could have a look at Star Sonata some day

Man Eve online was a fun game back in the early 2000s. Believe it or not, the player base were not so cutthroat as they are now. In fact, high-security space was really safe haven for non-pvp players. Getting ganked was so rare and if you hunted in high-security space you would be hunted down by half the server.