Chronicles of Elyria backers are raising an eyebrow this week over the new NDA that Soulbound Studios is asking them to sign before granting them access to the test for the spinoff game Kingdoms of Elyria. That’s because the NDA has a clause that essentially waives players’ rights to engage in a class-action lawsuit. You know, like the one that already exists. It also requires participants to acknowledge that the studio has no obligation to release a game, which is rather relevant to the lawsuit as well. The key part of the NDA is as follows:

“(iii) While Soulbound Studios intends to introduce a commercial version of the Game, you acknowledge that Soulbound has no obligation to release the Game or any similar product.
(14) Limitation of Liability
(i) YOU AGREE THAT THE LIABILITY OF SOULBOUND STUDIOS, ITS AFFILIATES, OFFICERS, DIRECTORS, EMPLOYEES, AGENTS, REPRESENTATIVES, PARTNERS, ATTORNEYS, AND LICENSORS IS LIMITED TO THE MAXIMUM EXTENT PERMISSIBLE IN YOUR JURISDICTION.
(ii) Soulbound Studios shall not be liable for cumulative damages under this Agreement in excess of $250.00.
(15) Dispute Resolution
(i) Governing Law. This Agreement has been entered in the State of Washington and shall be construed and enforced under and is subject to applicable US federal law and the law of the State of Washington without regard to said state’s conflict of laws provisions.
(ii) Agreement to Arbitrate. ANY DISPUTE, CONTROVERSY OR CLAIM ARISING OUT OF, RELATING TO OR IN CONNECTION WITH THIS AGREEMENT SHALL BE FINALLY RESOLVED BY ARBITRATION BY THE AMERICAN ARBITRATION ASSOCIATION (“AAA”) IN KING COUNTY, WASHINGTON GOVERNED BY WASHINGTON STATE LAW OR US FEDERAL LAW, AS APPLICABLE, IN ACCORD WITH THE RULES OF THE AAA IN EFFECT WHEN THE DEMAND FOR ARBITRATION IS FILED, WHICH RULES ARE INCORPORATED INTO THIS AGREEMENT BY REFERENCE. THE TRIBUNAL SHALL HAVE THE POWER TO RULE ON ANY CHALLENGE TO ITS OWN JURISDICTION OR TO THE VALIDITY OR ENFORCEABILITY OF ANY PORTION OF THE AGREEMENT TO ARBITRATE. THE ARBITRATOR MAY GRANT INJUNCTIONS AS WELL AS MONETARY AND OTHER RELIEF. THE DECISION OF THE ARBITRATOR WILL BE FINAL, CONCLUSIVE, AND BINDING ON THE PARTIES TO THE ARBITRATION. JUDGMENT MAY BE ENTERED ON THE ARBITRATOR’S DECISION IN ANY COURT HAVING JURISDICTION. EACH PARTY’S PROMISE TO RESOLVE CLAIMS BY ARBITRATION IN ACCORD WITH THIS AGREEMENT RATHER THAN THROUGH THE COURTS IS CONSIDERATION FOR THE OTHER PARTY’S LIKE PROMISE. THIS ARBITRATION PROVISION SHALL SURVIVE THE TERMINATION OF THIS AGREEMENT IN FULL FORCE AND EFFECT.
(iii) Class Action Waiver. THE PARTIES AGREE TO ARBITRATE SOLELY ON AN INDIVIDUAL BASIS. THIS AGREEMENT DOES NOT PERMIT CLASS ARBITRATION OR ANY CLAIMS BROUGHT AS A PLAINTIFF OR CLASS MEMBER IN ANY CLASS OR REPRESENTATIVE ARBITRATION PROCEEDING. THE ARBITRAL TRIBUNAL MAY NOT CONSOLIDATE MORE THAN ONE PERSON’S CLAIMS AND MAY NOT OTHERWISE PRESIDE OVER ANY FORM OF A REPRESENTATIVE OR CLASS PROCEEDING.
(iv) Waiver of Jury Trial. The parties waive the right to a jury trial in any action arising out of or related to this Agreement.”
We do note here that it is not unusual for companies, even game studios, to include language like this in their NDAs and terms of service. For example, the Electronic Arts (I’m picking it at random) terms of service locks customers into similar arbitration agreements. Heck, MMO players will recall that the lawsuit against Trion Worlds over ArcheAge that was settled last year hinged on the verbiage governing lawsuits and arbitration. We’re not saying you should sign away those rights, just noting that it’s fairly common for companies to do to try to protect themselves from consumers they’ve wronged.

But under these particular circumstances, given that there’s already an active class-action relating to this company and its original Kickstarter game, it should certainly give you pause before you pick up your virtual pen. While players are busy arguing over whether California case law on such arbitration clauses would allow them to apply to pre-existing lawsuits, the Discord dedicated to the ongoing lawsuit is advising that backers not sign the NDA. 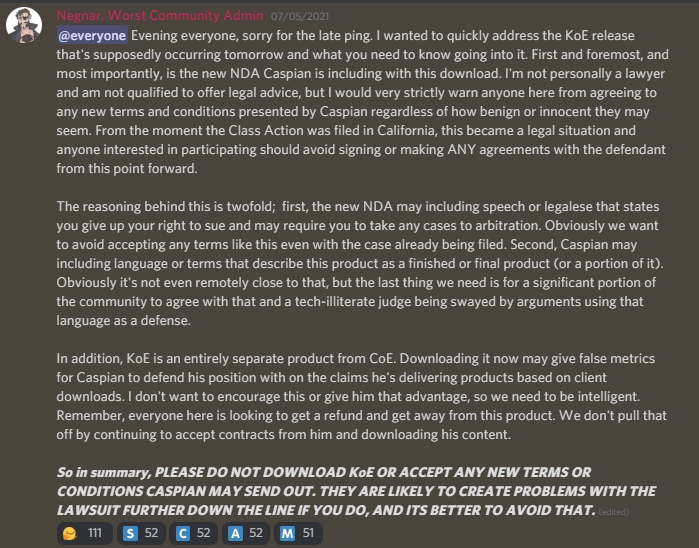 As we’ve covered at length, in 2020 Soulbound abruptly announced that it had closed the studio, laid off the team, and ended development of Chronicles of Elyria thanks to a lack of funds. CEO Jeromy Walsh later retracted much of his initial announcement, claiming instead that the game was still in production with volunteer staff. But backers who’d poured $14M+ in crowdfunds into the game took it to court with a class action lawsuit against both Soulbound and payment processor Xsolla. As of 2021, the studio maintains that COE and its spinoff Kingdoms of Elyria are still in production. The lawsuit was filed back in February, and as of a few weeks ago, the plaintiffs were still filing motions to dismiss with the court.