Thanks to a certain national holiday, November is a month when many in the USA focus on giving thanks. And all around the gaming-verse, there have been plenty who have focused on giving! For all of you, we offer much gratitude. We applaud the many instances of generosity throughout this season as studios, gamers, and game communities came together to raise money for charity and do good deeds. Immerse yourself in the thanks and giving here in Massively Uplifting.

Elyon upgraded its commitment to reforestation, and Warframe, ARK: Survival Evolved, and World of Warcraft Classic communities came together to support fundraising efforts for curing cancer and other medical needs. And right on the horizon, Hi-Rez’s SMITE is preparing an memorial charity event this weekend called Finchmas in memory of a member who was lost earlier this year.

Join us on December 11 as we celebrate the life and legacy of John Finch during the Finchmas memorial charity event. 💛

At the request of John's family, all proceeds from this event will benefit @southerncenter.

Earlier this summer, we mourned with the SMITE community as it was dealt a blow with the loss of popular esports caster John Finch. Hi-Rez then announced that a special charity drive in Finch’s honor would be held later in the year. Those details are now in: A special Finchmas Charity Event will be held on Saturday, December 11th, and Sunday, December 12th. Finchmas includes charity streams from the studio as well as other streamers and even includes the Finch Memorial Tournament (you can join the event’s Discord), an affair labeled as the largest community event that SMITE has ever seen. Viewers can win skins during the streams, and all who donate are entered in a raffle for prizes. Those donating certain tiers will receive their choice of specific skins. All who donate also receive The Giver title and avatar in game. Check out the rewards and broadcast schedule on the official post.

Donations on Tiltify will open on December 10th and remain open until the event concludes on December 12th. All proceeds will benefit the Southern Center for Human Rights as requested by Finch’s family.

The USO plays it forward

Veterans Day this year marked the start of the second annual gaming streamathon Play it Forward hosted by the United Service Organizations (USO). Except this year, instead of spanning just one day, it stretched over the entire weekend. For 72 hours, celebrities, gamers, influencers, and athletes joined with service members to raise money for the USO to help in its mission to create gaming centers that allow service members to unwind, bond with their comrades, and even connect with family and friends back home. Participants included Pittsburgh Steelers’ JuJu Smith-Schuster, The Chainsmokers’ Drew Taggart, celebrity gamer Tfue, Linkin Park’s Mike Shinoda, and NY Mets’ Trevor May. Besides various games, the weekend included a Call of Duty competition where service members teamed up with top gamers in a Battle of the Branches.

Since the inception of the gaming program, the USO has hosted 89 live streams featuring 11 USO gaming Ambassadors, celebrity engagements, and tournaments. In addition, the USO has several dedicated gaming areas within its centers, with more opening in the months to come. Christopher Plamp, USO senior vice president of operations, programs, and entertainment, said:

“Through the support of our partners and the gaming community, the USO is building a first-in-class gaming program that provides our military community opportunities for stress relief, entertainment and connection. Video games can connect service members with their loved ones, civilians, veterans, and the broader community of gamers. We invite all members of the military community and military supporters to connect with us during an exciting 72-hours playing some of the hottest video games on the market with celebrities and fellow gamers.”

In support of @onetreeplanted we will be making donations to help recover our forests. Let's try for more trees, so this time, we'll make it double🌳

The number of retweets on this post will be added to the 360 retweets from our last post🌱 pic.twitter.com/03dLQVvLDI

Last month, we applauded Elyon’s commitment to plant trees equal to the retweets on a Twitter post. Outdoing itself, the next tweet from the studio promised to plant two trees for every one retweet, doubling the reforestation efforts. This time we don’t see an expiration date for the offer, so feel free to hop in and click away to add two more trees to our planet!

Also last month we highlighted Warframe’s Quest to Conquer Cancer. Space Ninjas stepped up (or perhaps better said, parkoured up) and blasted past its goal of $130,000, raising just over $178,577 for The Princess Margaret Cancer Foundation in Toronto, Ontario. 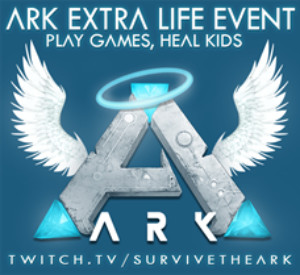 Charity streaming for Extra Life is in high gear throughout October and early November, and Studio Wildcard’s ARK: Survival Evolved dived right into the action. During its annual charity livestream, the studio raised $187,764 for the Children’s Miracle Network. Thanks to the generosity and support of the community and the help of partners and sponsors, ARK landed on the leaderboards of both the individual and team fundraisers. Way to go everyone!

On November 30th, Game Theory hosted a massive fundraising extravaganza for St. Jude Children’s Research Hospital. But before that, it invited everyone to join in that mission with their own fundraisers throughout the month of October. The World of Warcraft Classic community answered the call and put together a Classic Against Cancer. Malygøs, founder of the event, said “Our goal is to unite the entire WoW Classic community against a common enemy, under one battle-flag, and do something amazing… something never done before.” The event exceeded its goal, earning $2,661.10 for the famed research center to aid in its mission to fight against children’s cancer and offer free treatment to children afflicted with it.

If your heart can handle even more warm fuzzies (and whose couldn’t?), we’ve got good news for you! All this good news is for you:

How to support Extra Life 2021, from Guild Wars 2 and EverQuest to LOTRO and City of Heroes

Perfect Ten: Recent promising MMOs that died before they were born