Summer has ended, school has started, and now the leaves have begun to fall as the air turns cooler. It’s a time of coziness and warmth. And what is better at warming you on the inside (besides hot chocolate, of course!) than the act of doing good deeds? Be it your own actions or hearing about those of others, charity and service drive out the chill and bring warmth to the heart and soul.

Throughout this season we’ve had a number of examples to help uplift us, from Warframe’s Digital Extremes embarking on its “Quest to Conquer Cancer” to Final Fantasy XIV’s Square Enix supporting the Red Cross and torrential rain relief in Japan. Extra life is in full swing, and Daybreak Games and ArenaNet teams join others (like one Secret World Legends fan, Jimmy the Rabbit) to raise money for children’s hospitals. Other charity initiatives include raising money to end childhood hunger, to send medical aid to Haiti, to replant trees, and to provide COVID-19 vaccines to developing nations.

Even if Massively Uplifting can’t warm your hands, it can help warm your heart. Check out all these stories and more! 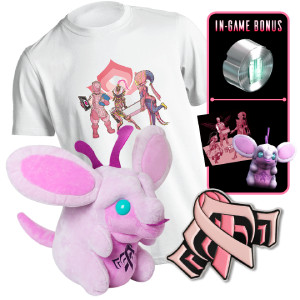 October is Breast Cancer Awareness month, and Warframe’s Digital Extremes has dedicated the month to raising money to help eradicate it, partnering with The Princess Margaret Cancer Foundation in Toronto, Ontario. All throughout the month fans of the game can help the fight against cancer and contribute to research for a cure. Last year, over $100,000 was raised; Digital Extremes hopes to surpass that in 2021.

To aid this cause folks can tune in to participating Warframe streams or go to the official Quest to Conquer Cancer page to donate using Twitch’s “Donor Drive” feature. As donation milestone tiers are reaches, special in-game content on all platforms as well as sneak peeks of The New War concept art will be earned. Additionally, a new line of pink Warframe charity merchandise is available with proceeds going to The Princess Margaret Cancer Foundation; folks can purchase a t-shirt, an enamel pin, and the Conquera Kuaka Floof Plush (that also grants an in-game version). So far, $72,868 has been raised.

Relief aid and the Red Cross

There are many medical needs throughout the world, both at home (no matter where your home is) and abroad. Recently, the Bungie Foundation and Team Rubicon have been working to provide life-saving medical care to the people of Haiti by selling a #GuardiansforHope T-Shirt.

Extra Life is a well-known initiative that that encourages teams to come together to raise money for Children’s Miracle Network and local children’s hospitals. Multiple studios and dev teams are joining the event for Extra Life Game Day on November 6th. Daybreak’s EverQuest II and DC Universe Online both have teams that folks can join or follow to donate to. As of this writing, EQII has raised $5,636 and DCUO has raised $11,200. The Guild Wars 2 team invites more to participate as well. For this team, $16,862 has been raised so far.

It isn’t only studios or large teams that create Extra Life events. Tons of streamers and gamers get in on it as well. One such Secret World Legends player is making his own event; JimmyTheRabbit’s SWL ExtraLife Memorial Celebrity Children’s Miracle Network Hospitals Awareness Pro-Am Fun Run Race For The Cure II will be on November 5th through the 6th on Twitch. Yes, he will be running — on a treadmill. Those who donate can receive an Extra Life t-shirt in game, and there is even stretch goals: Hit $500 and he’ll use his electric guitar as a controller while also walking on the treadmill for at least one mission. Fifty dollars has already been raised, so at least two miles will be completed.

This year, Extra Life 2021 donations will also help support Children’s Miracle Network’s new COVID-19 Impact Fund to help take care of their young patients during the pandemic. And speaking of COVID-19, the 2021 World Esports Day will raise money to get COVID-19 vaccines to developing nations.

In other esports news, a group in Japan has been bashing stereotypes of competitive gamers. Based in Akita, Matagi Snipers is Japan’s first senior esports professional team, with member ages ranging from 66 to 73. And yes, the team has its own sponsor and everything. Although only eight made the team, 21 people applied to join. Some who made the team hadn’t even gamed before, but they’ve gotten into it and enjoy gaming now. One member even credits gaming with keeping her mentally sharp. (We already know gaming can be good for you!)

🌲 Help us make the planet a little bit better! 🌲

For every retweet in this @Elyon_thegame tweet, we will be planting one tree in British Columbia!

It takes you 3 seconds to make this a reality! https://t.co/Qj3xvbz2Pn

When we say folks have been feeding the world, we mean it in more ways than one. First, The Elder Scrolls Online ran multiple special fundraising streams for the No Kid Hungry organization between October 14th and the 17th to raise money to end childhood hunger.

Second, the world itself is being fed as Kakao’s Elyon and Gamigo’s MMOs all work to plant trees. Elyon pledged to plant a tree for every retweet of its announcement (how much easier could helping the planet be?). The cooperation between Gamigo and the Eden Reforestation Projects has been so successful that the arrangement has been made permanent. The packages to support this initiative can be purchased for multiple Gamigo games, including Echo of Soul, Fiesta Online, Grand Fantasia, Last Chaos, RIFT, Shaiya and Wolfteam. Gamigo notes that more titles and different packages will be added over time.

The original premise behind Humble Bundle was to offer a bundle of games while donating to charity. Established 11 years ago, Humble’s mission was to “help mobilize and focus the inherent goodness of game-lovers everywhere in support of indie developers and charity organizations.” Since Humble Bundle’s debut, folks using this service have helped it to collect $200 million for charity! This support has gone to countless organizations and groups that help numerous causes. Watch the video above to hear heartfelt thank-yous from some of these causes.

Thanks to the COVID-19 pandemic, virtual memorial services are something that have sadly cropped up more over the past year and a half. But they aren’t new, and Zoom is not the only medium. In fact, gamers have created and held memorials in-game for decades. Just recently, the Shroud of the Avatar community held an in-game memorial service for a community member, Twistar, who recently passed away from COVID. Players gathered together and offered a touching tribute, sharing stories and reminiscing together. The service to say farewell to a friend was streamed over Twitch. Our condolences to all friends and family.

Fallen Earth may be returning soon in ‘classic’ form