We’ve had just enough time to digest that epic trailer, and now A Star to Guide Us is live. This is the fourth episode of Guild Wars 2‘s fourth season, and what an episode it seems to be. I got to tinker around with an early dev preview of the patch over the weekend, putting a couple of hours into the build before today. This episode is set to be the mid-season climax to end all mid-season climaxes: Aurene is growing in power, and the trailer is all about her fast-approaching rise against the elder dragons.

END_OF_DOCUMENT_TOKEN_TO_BE_REPLACED
In this episode of Flameseeker Chronicles, I’ll discuss what I can from the playthrough and will share my first impressions of the episode. I can’t promise much in the way of juicy details: Much of what we discussed and saw during the playthrough is far too spoilerific for this first impressions piece, and I was asked to keep the major arcs to myself for now. Nevertheless, I will talk about the trailer, the playthrough experience, and the additional goodies that are part of this patch. I don’t have the space to do a recap of the last episode here since so much content is dropping at once: Before you read on, note that there will be mild spoilers below for both the last episode and this one.

I couldn’t launch into my opinions without briefly hinting on how wonderful the episode trailer was. Anything to do with Aurene usually does have me hooked, admittedly, but that was a grand build-up. It’s clear that much of this episode is going to hinge on Aurene, and judging by the prioritisation of content shown to us in our playthrough, I think that the trailer does a fantastic job of cutting to the heart of the episode without getting too spoilerific. I love how the evolving instance, new map, and heart of the story each get their limelight moment in the trailer. It’s so cleverly crafted and I just wish we could get these trailers a little earlier to really keep the hype going from episode to episode.

The trailer really makes us question Aurene’s role in the narrative going forward: Who will Aurene be, and can she ever live up to legacy? The weight on the young dragon’s shoulders is extraordinary, and we know already that Vlast ultimately couldn’t cope with the pressure. Can our little Aurene? Will she have the time to come to terms with her fate before it meets her? It’s such a fascinating story arch. The final references to visions of the future and multiple possibilities are chilling: It seems that the fate of the world is far from certain, and the key to success lies with Aurene. 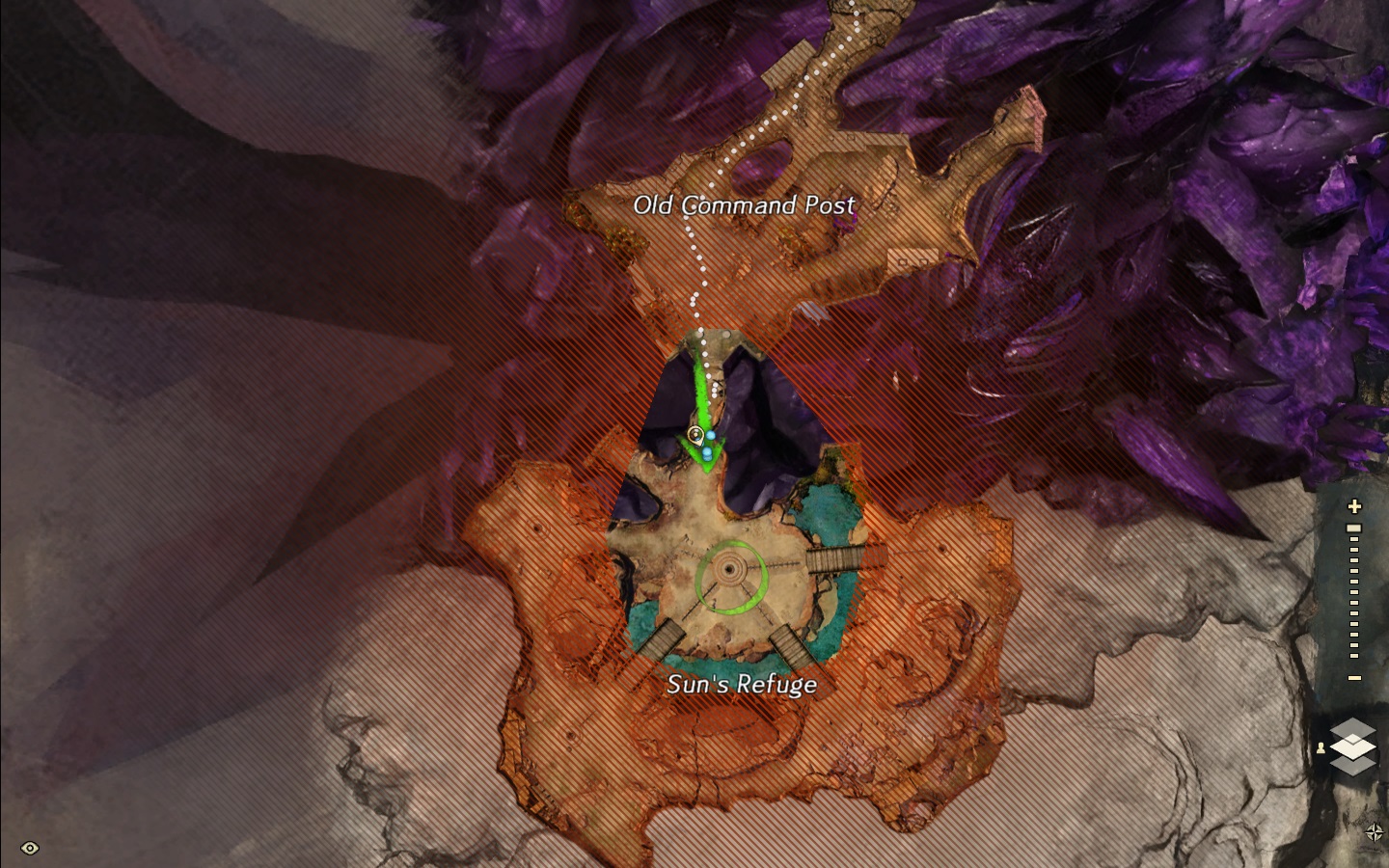 The new map, the Jahai Bluffs, sits within Kourna once more. We didn’t spend much time on the open map during our press playthrough since most of the content we were exposed to was instanced, but I had a little run around and really adored the visuals and quirks. We’re already familiar with many of the key elements we’ll run up against in this particular locale: Branded scarring is ever-present in Kourna, influencing the dangers we can expect to find out on the Bluffs.

Just as with the other maps this season, its space is open, the skies are the most beautiful thing to watch, and the map feels positively alive with happenings and interesting points to note. One amazing feature is the tornados that propel characters into the air: The views you’ll have so high up are just breathtaking. Check out the screenshot gallery to see some fantastic aerials. 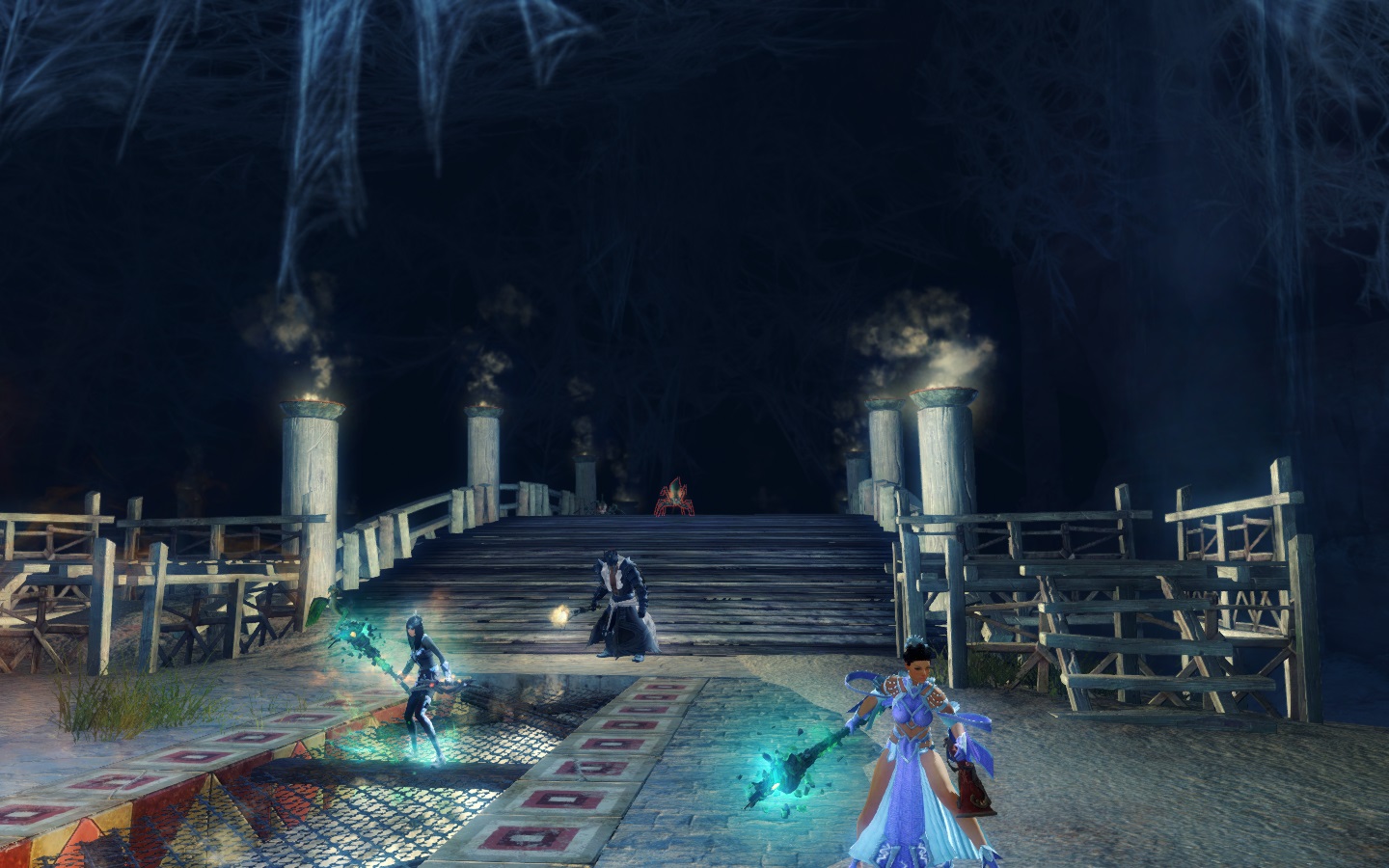 We commenced our playthrough midway through the episode on chapter 3, Legacy. Palawa Joko met his demise and this has created a power vacuum in Elona: tensions are running high and once-united factions are shattering and reforming in the wake of his death.

Click to reveal spoiler!
As WoodenPotatoes correctly surmised in his trailer breakdown, an offshoot of the Awakened forms called the Free Awakened.

Trying to hold the peace proves rather difficult when a stubborn Aurene crashed the summit: Considering she just ate the old leader, this isn’t the best move ever. Events conspire to help push the fact that Kralkatorrik is the main opposition to the realm as the elder dragon shows off some new powers. Koss shows up and informs the commander that there is one safe place left, which is the old Sunspear encampment, Sun’s Refuge, which is where we commenced our playthrough.

We spent time getting the new instance ready to be a safe haven for those fleeing Kralkatorrik: I really can’t say too much about what occurs down there, but this is some unmissable story evolution that is well worth playing through for yourself. The press audience audibly gasped and oohed throughout the segment, and its contents were really shocking. I am actually bursting to get playing the next chapter and onwards today to find out what happens by the end of the episode.

One hilarious factoid I can share without being too spoilerific is that our big bad Braham is scared of spiders, which cracked us all up as the exchanges in the dusty old Sunspear base progressed. You will have noticed the spider webs from the trailer: Someone had to do quite a bit of cleanup in there, and who better than Braham? 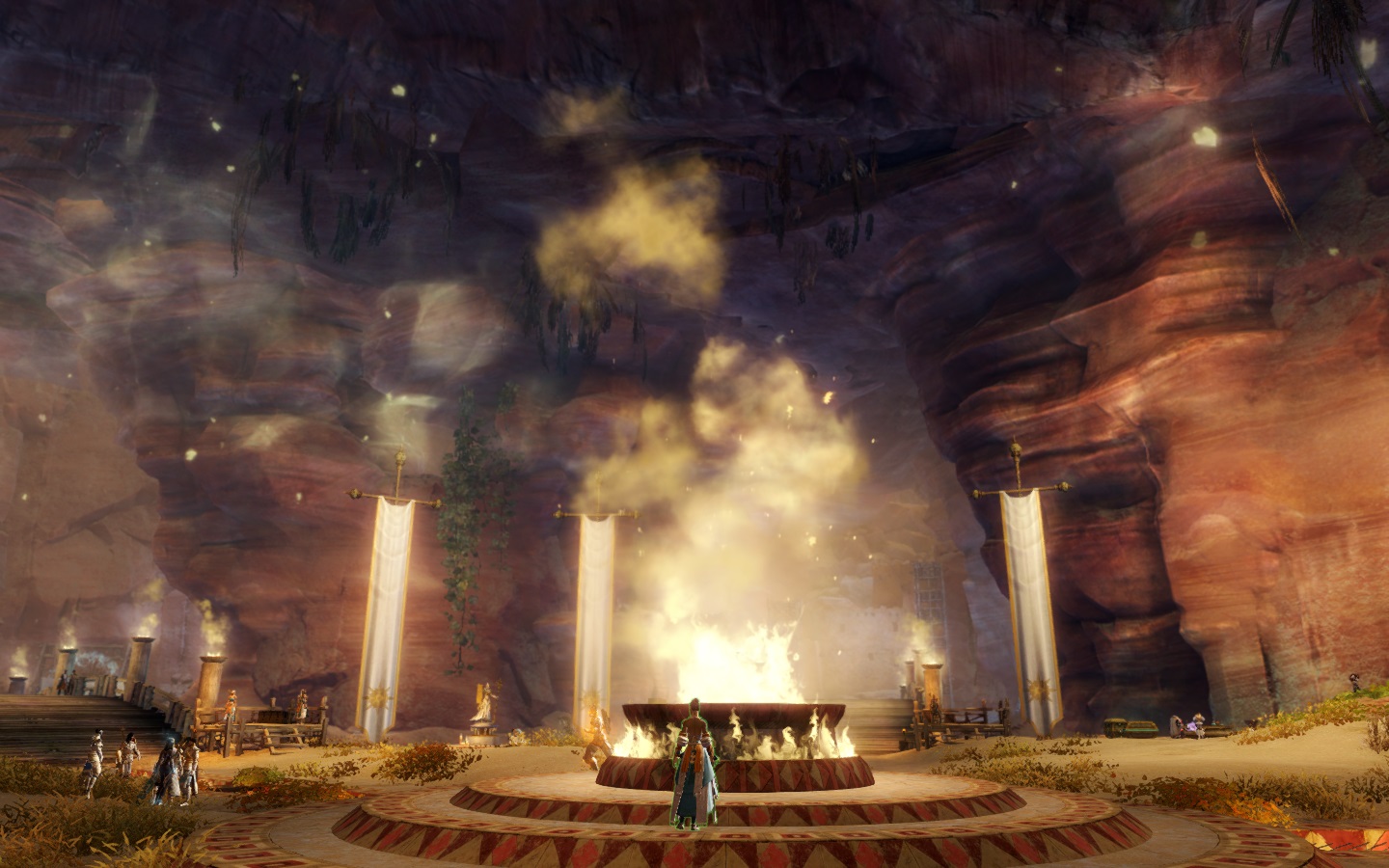 I had a great time just taking in the sights within Sun’s Refuge: The development team was able to explain how the instance will evolve as we uncover more of its secrets, and I know for certain that this process alone will massively increase the replay value of the new content. The base is equal parts nostalgia and modern GW2 mechanics: Expect all the bells and whistles we’ve come to expect from the emergent toolset ANet has been using recently. I won’t go into specifics of where the expansion opportunities lie since you’ll have far more fun learning for yourself, but trust me when I say there are some fantastic mysteries to solve in the Refuge. 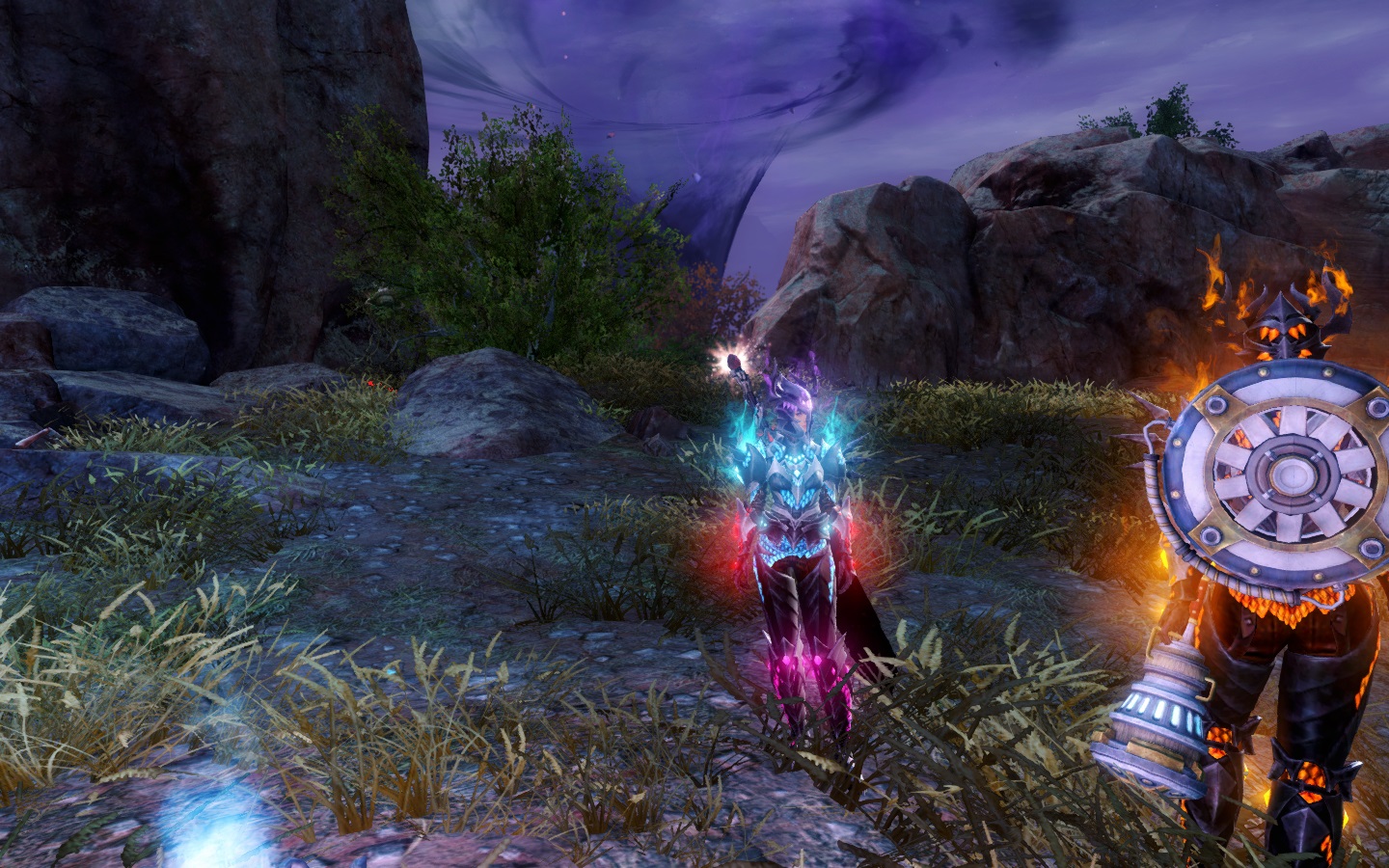 The upgradeable, two-tier armour set for the episode is just stunning: All the glow sections are dyeable, which gives the set an amazing array of looks. I adored the looks created by Heather Conover, Living World episode 4 team lead, during our playthrough and cannot wait to don the armour myself. I’m thinking it’ll look best on human toons, but have a tinker and send me screenshots when you get it.

When you make the new legendary scepter Xiuquatl in the next #GuildWars2 #LivingWorld episode, you'll also make a friend. Say hello! pic.twitter.com/z2kCN7X4Gu

Xiuquatl is a gorgeous little piece of weaponry: It’s inspired by ancient water civilisations and comes with a minion that will follow you around. This piece has everything — glow, floating embellishments, stone totem details — and is, to my eye at least, one of the most tasteful legendaries on offer. It has a gorgeous water-themed footprint trace as well, which looks stunning trailing behind more delicate characters. I’m seriously considering tweaking my necro build to use this one! 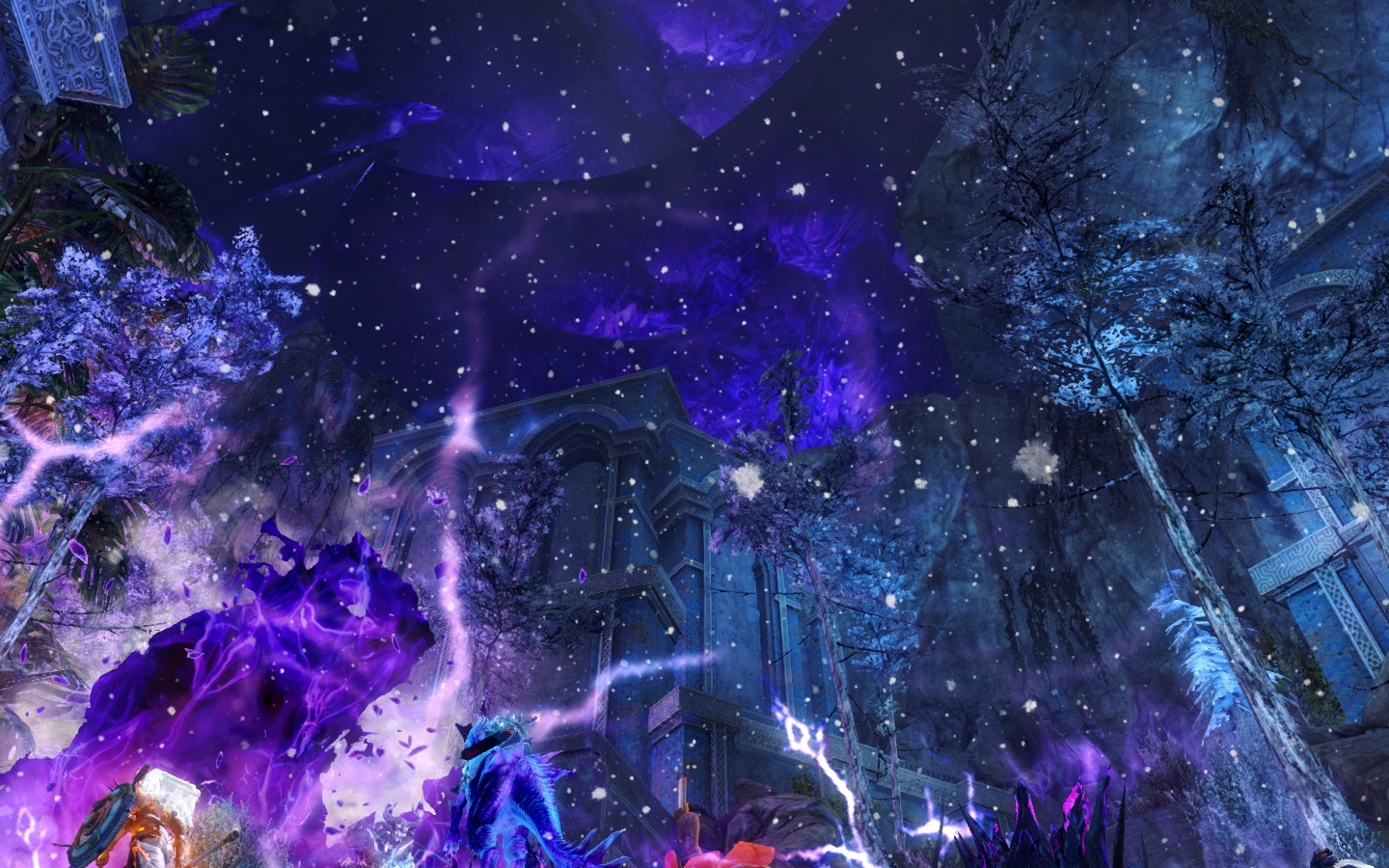 The episode comes with a new mastery, of course, this time related to your mount and called Bond of Vigour. This sits next to Bond of Life in your mount controls and massively improves your endurance recharge rate, which really helps you escape from danger and makes racing and griffon flight much easier. The Bluffs is such a dangerous map that the new mastery really is essential for getting around without being too waylaid by minions.

Ever wondered what happens to all the items you give to Zommoros? Tour the Mystic Forge in the next #GuildWars2 #LivingWorld raid! pic.twitter.com/xSEtzT7SxL

Sadly, I can’t tell you anything new about the Mythwright Gambit raid as it wasn’t part of my preview experience. I can point you to the cool raid video ArenaNet crafted, though, and I will say that I’m most definitely eager to sink my teeth into the new content. Come on: Try to tell me the concept of raiding the mystic loo isn’t hilarious and I will call you a liar, I tell ya!

I cannot wait to get playing today: I hope you’ll keep me updated with your thoughts as and when you experience all the patch entails for yourself. I am almost overwhelmed by how much is dropping at once, and while clearing the story content will be my main focus at first, I’m also sure I’ll start that legendary journey, and I’m bursting to play the new raid.

I’m also really excited to get back to Flameseeker Chronicles after some time away: Things have been crazy in Tina Land, and I’m so glad to be back. I can’t wait to bring you further thoughts on A Star to Guide Us and perhaps some new raid guides too. Let me know what you’d like to see in the comments!