A few years ago I regaled you with the fascinating tale of one of the very first multiplayer graphical MUDs, the absurdly named Shadow of Yserbius. If you’re too lazy to click on that link (and you are, let’s be honest), Yserbius was a project by Sierra Online that came out in 1991 as part of The Sierra Network (which would later be called The ImagiNation Network under the reign of AT&T).

Yserbius offered dial-up users the opportunity to group up with a few others and go on a dungeon dive into the caverns of a volcano. Between these dives, players would mingle at a tavern, sharing adventures and getting into totally safe-for-work roleplaying. Even though players had to pay hourly for the privilege of paying Yserbius, the game was a big hit for Sierra, who then commissioned two follow-ups based on the same engine.

Today we want to take a look at those sequels, discover what happened to them, and even offer you the chance to check them out today. 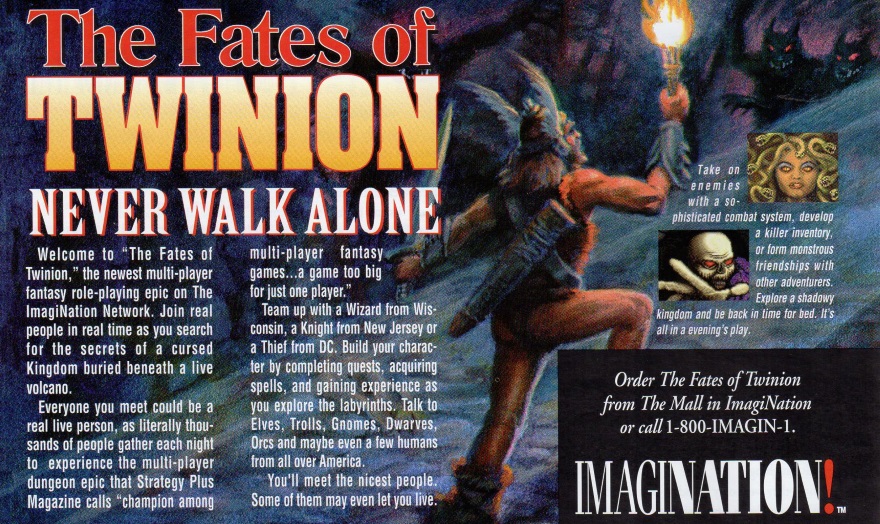 In 1993, The Sierra Network was struggling and on the verge of collapse. Apparently the sheer amount of data that gamers were using to access titles like Shadows of Yserbius couldn’t be supported by Sierra without driving the company toward bankruptcy. “Ken [Williams] had no idea at the how hardcore gamers would eat his bandwidth,” said Sierra’s Brian Thomson.

An odd savior arrived when TSN was snapped up by AT&T. The new owner rebranded it The ImagiNation Network (INN) and greenlit two sequels for the then-hot Yserbius. The first of these would become 1993’s The Fates of Twinion., which was also produced by Joe Ybarra (the producer of later MMOs such as Shadowbane and The Matrix Online).

Twinion proved to be a rush job that was slapped together to make a poor final product. “Fates of Twinion was so buggy QA refused to test anymore,” said designer Richard Aronson. “The designer had no design experience. I was hired because I’d run LA Mensa’s RPG group for more than a decade, plus theatrical experience and writing experience. I fixed all the system code fatals in Twinion (there was also a bad PvP fatal in Yserbius but it didn’t get noticed much) since [Ruins of Cawdor] was on the same code base, but I seriously redesigned everything for more balance.”

Another change that Aronson made was putting an end of the rampant use of cheat codes. Follow that, any players who attempted to use one would automatically receive a week’s suspension from the game. 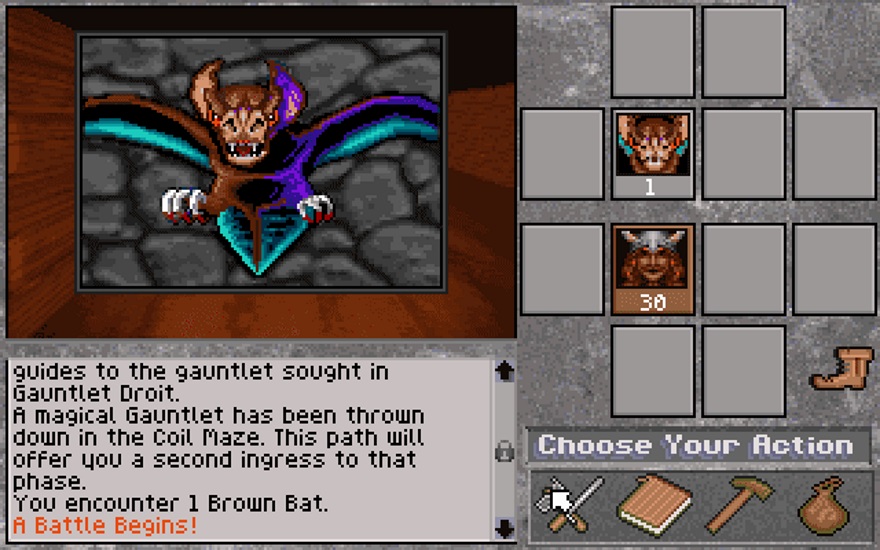 Fates of Twinion didn’t stray far from Yserbius’ model, offering players a different dungeon to explore with tons of random enemy encounters and tempting treasure to plunder. It was reportedly more complex in its layout and puzzle design, but not extremely so. Players explored new locations such as the Aqueduct, Twinion Falls, and the Coliseum before finally working up their way to the Queen’s Palace.

Both Yserbius and Twinion were repackaged in a “deluxe pack” that sold in stores, which is now considered somewhat of a collector’s item for die-hard fans. “At last a fantasy world that goes beyond anything you’ve ever experienced,” the back of the box promised. “A world where everyone you meet could be real. With the choice of both single and multiplayer versions of the hottest online fantasy role games every created, you’re in complete control of your destiny.”

The fate of Fates of Twinion was sealed in 1996, when The ImagiNation Network was taken offline and its community exiled from these fantasy realms. Fortunately, Twinion had an option for offline play, and in fact you can boot it up from your browser with one easy click today if you want to check it out. There’s also a walkthrough, not that you need one.

Do you like a bit of Shakespeare in your RPGs? Chances are that most players wouldn’t even notice the Bard’s presence in their games even if it was glaringly obvious once pointed out. So I have doubts how many people recognized that Ruins of Cawdor was essentially Macbeth redone for an online gaming audience.

Created by Richard Aronson, Cawdor would become the final of the INN’s trilogy of graphical MUDs. Aronson is perhaps best known as the voice of Cedric the Owl (yes, that poison-adverse Cedric) from King’s Quest V and the author of Eric and the Gazebo. He had been working on various systems that would be highly useful in online RPGs, such as chat features, a quest generator, and behavioral AI.

The challenge of Cawdor wouldn’t be another dungeon, but rather the titular six-floor castle. Inside, players would meet various NPCs, battle an army of bad guys, discover secret passages, and find all the loot their backpacks could hold. Because it was released just a year before INN shut down, Cawdor isn’t as well remembered or discussed today among the coming community.

As with Twinion, Cawdor got an offline patch that allowed people to still experience and explore it solo after INN went defunct. Interested in taking a journey to the past? Here you go!