Do you know what one of the best things about Massively Uplifting is? Although the world focuses on giving good deeds and Joy to the World during the holiday season, we highlighted them all year long! And the holiday season is no different: December has its share of examples of the great things players, studios, and developers do for others to uplift and comfort. It’s true 2020 had plenty that was not great about it, but the year wrapped up with some great things. So here’s your year-end does of goodness to get you started in 2021 right, courtesy charitable donations from communities, players, Momocon, and the studios Niantic, ArenaNet, and Creative Assembly, along with a touching memorial in Shroud of the Avatar.

Games aren’t the necessarily proverbial escape from reality that some might claim; they are a place where we take some of the most important parts of ourselves and our lives. The best way to lead off this month’s tribute to the uplifting is with a tribute to man’s best friend. When one Shroud of the Avatar player recently lost a life-long companion, a pooch named Fletcher, the player created a beautiful memorial for him in game. And another player shared the moment with us. Thank you for this lovely memorial, and for the opportunity for other players to leave notes of support!

A fellow #ShroudOfTheAvatar player lost a life-long companion, and built them a beautiful memorial in-game. Other players were invited to come and leave notes of support.
Things like this are why online games are so important to some people.

Some veterans already have emotional or physical struggles related to their service, but adding a pandemic on top of that can make things worse. StackUp.org did not back down from the challenge in 2020. While all physical means of gathering donations by many organization were curtailed, Stack Up’s CEO and Founder Stephen Machuga reported in an end-of-the-year press release that “Stack Up managed to not only survive but break records in both fundraising and supporting the troops.” He added,

Things could have very easily gone the other way: with record unemployment and out-of-control medical bills, money for donations to Stack Up could have dried up completely. Instead, people came together and donated in record numbers for us in support of our mission of helping veterans through gaming.

Even though COVID’s effects on Stack Up included shutting down both its Air Assault trips to gaming events and Stack local volunteer programs, Machuga noted that the organization doubled down on the number of Supply Crates it sent out to veterans around the world. Also, its official Discord channel and the Overwatch program helped out a record number of veterans throughout the year, from simply giving folks an ear to listen and vent to to help talk them off a ledge when in serious distress. If there was a year when the that the StOP Mission that we covered last January was needed, 2020 was it. 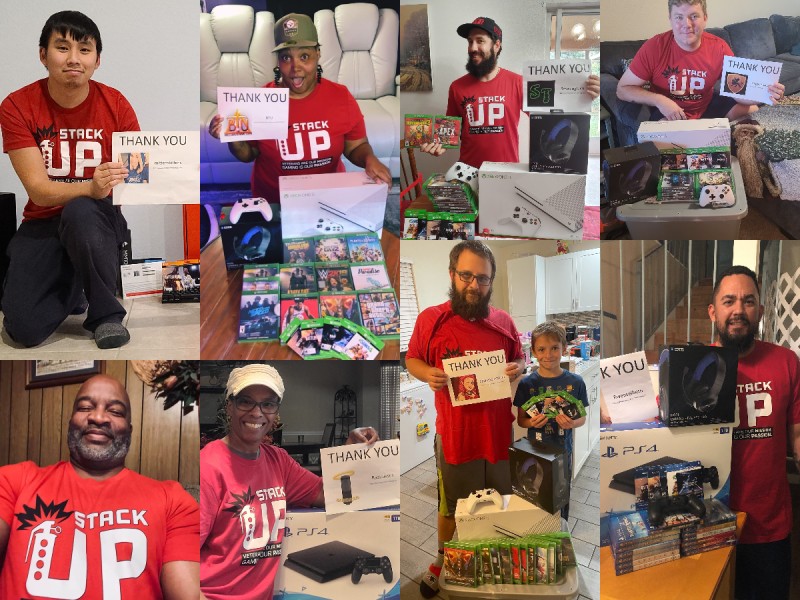 On top of the generous community donating, Machuga attributed the success to the work of streamers, whose “fundraising streams were consistently putting up pictures of the veterans they were sponsoring, showing their community the good their dollars were providing in the world.”

Thank you to Stack Up, the streamers, and all those who supported and donated to helping our veterans throughout this year!

Like other in-person conventions and events this year, Momocon went digital. The annual video game/comics/tabletop games/anime and animation event in Georgia was postponed and reimagined in a digital format on Twitch. However, just because folks weren’t meeting in person wasn’t any reason for the charitable aspects of the convention to go away! Over the three-day interactive streaming event, Momocon was raising money to benefit Feeding America, a nonprofit nationwide network of more than 200 food banks. Donations from viewers and fans would help provide over meals to food-insecure families across the US, including in the home area of Atlanta with the Atlanta Community Food Bank. While not meeting its goal, Momocon and supporters raised over $7K. That’s a lot of meals for those in need! 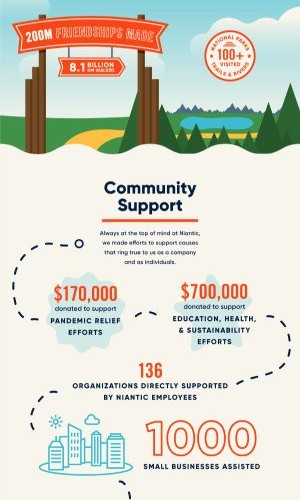 Being extra Extra this season

Extra Life fundraising goes on all year, but near the end of the year there is a larger wave that sweeps across the word. As Guild Wars 2 participated this season, the studio offered a special Extra Life Bundle and pledged to donate all the proceeds of its sale to help kids through the Children’s Miracle Network. Though the generosity of the players who bought the bundle, over $92K was raised and given to the charity. Well done, GW2 community!

While we hear much about Extra Life, there are many other needs besides health issues that children have as they face life. During this COVID-19 pandemic, barriers to academics became more pronounced as learning moved to remote in many places. In stepped Creative Assembly, the studio behind the Total War series and Total War: Arena. To help smash some of those barriers, the studio donated over £30,000 of brand-new laptops through NextGen Skills Academy. These laptops are specially configured to run specialized games industry software applications, and as NextGen Skills Academy’s Games Partnership Director Marcia Deakin pointed out, the donation will have a long-reaching benefit. “Each laptop will be refurbished and transferred to a new NextGen student once their current owner graduates, helping to deliver an ongoing legacy of addressing inequalities and breaking down barriers to education,” she says.

This donation is just one part of a larger initiative to support education; called the Legacy Project, Creative Assembly’s outreach program’s goal is “to make a significant and enduring contribution to education, charity and our local communities by harnessing those with creative aspirations and passions, using games as a force for good… thereby leaving a LEGACY.”

Last November we highlighted the efforts of Niantic, the creator of Pokemon Go, which created a special initiative to support small businesses during the economic upheaval of the epidemic. A total of 1,000 small businesses have been assisted. But that’s not all! The studio released its 2020 Social Impact Report to share the progress on its different initiatives throughout the year, including its Black Lives Matter commitment, the Local Business Recovery Initiative, partnerships to enhance the power of virtual learning, and work with the business coalition for marriage equality in Japan. The report includes an infographic highlighting the various community support shared, from donations of $170K and $700K to support pandemic relief and education, health, and sustainability, respectively. Additionally. $7 million was donated to nonprofits focused on supporting black communities.

Free character transfers for World of Warcraft are closing on Thursday

World of Warcraft brings Brewfest around once more in both retail...

Neverwinter brings back the Harvester of Nightmares to consoles and offers...

Starbase previews moon base building and moon mining features in a...