As promised, Enad Global 7 has released a community update specifically to address the future of games under Daybreak – something lots of folks have been asking for, really for the last six years, and it apparently took a buyout to get it.

EG7’s Robin Flodin has posted both a community letter and a video about the company’s plans for the substudios MMO players in particular will care about. The letter doesn’t have much meat to it; Flodin emphasizes Daybreak’s big milestones, homing in on EverQuest, DCUO, and DDO specifically, saying EG7 “intend[s] to continue this incredible legacy for many more years to come.”

“Many of these games, while successful and continually supported, have had their unique challenges,” he writes. “Many of these challenges are long standing and important, but due to their scope or other situations, haven’t been feasible to address. All of us want this to change. […] I want to assure you that this effort is a priority for me, EG7, and Daybreak. We have been listening to the community feedback and to all of your questions and concerns. This is an ongoing effort and as we make progress, the goal is to develop specific plans to create an even better game experience for all of our players. Just know that all of us — our community, Daybreak and EG7 — are fully aligned and committed, and we all want to improve.”

The most interesting bit is in the video, where Flodin, who says he himself has been both a developer and player, is speaking directly to the community. “We’re trying to make these companies better,” he says. “We’re trying to help them improve in areas where we think we can create value.” There’s a lot of corporate-speak in there as Flodin tries to juggle making both the community and the investors happy, but then the Daybreak chunk starts around five minutes in.

Flodin says he knows there are serious issues with Daybreak that EG7 is working on. In fact, he drills down to H1Z1 almost immediately, admitting that there hasn’t been a team working on H1Z1 and that it was almost sunset, something you’ve probably gleaned from the lack of updates and social media from the game over the last year or so. But Flodin says that he’s brought an EG7 team in to “evaluate” the codebase and community for the game to figure out how to fix it and what exactly they will do with the game (turning it over to the playerbase is apparently on the table). He even says there’s a working build for Just Survive, hinting that it might eventually return to service, although he warns there won’t be any updates in the short term, so don’t get too excited; apparently we can expect a “more final” announcement eventually.

He then shifts to PlanetSide 2; he doesn’t spill any exciting beans there, apart from saying that with a Rogue Planet type of studio, EG7 is more there to “help” it achieve more rather than rescue it. There’s not much else on other games apart from the promise to continue dialogues like these with the community every half year or so – which let’s be honest is more than we’ve ever gotten from Daybreak.

Earlier this week, EG7 published its annual report, and there’s honestly not a whole lot in there that we didn’t already know: that EG7 bought Daybreak and Piranha last year and Innova a few months ago. The company calls the Daybreak acquisition its “most important event” of 2020 and talks up its “significant profitability and cash flows” and 178M all-time users, which will once again make you angry since most Daybreak MMOs have been operating as if they’ve already got one foot in the grave. Hopefully Flodin will make good on his plan to turn that around. There is no mention of the Marvel IP this time around, though, just EverQuest, LOTRO, D&D, and DCUO, with slides for H1Z1 (a wonder) and PlanetSide 2, along with MechWarrior Online and MechWarior Mercenaries from Piranha. 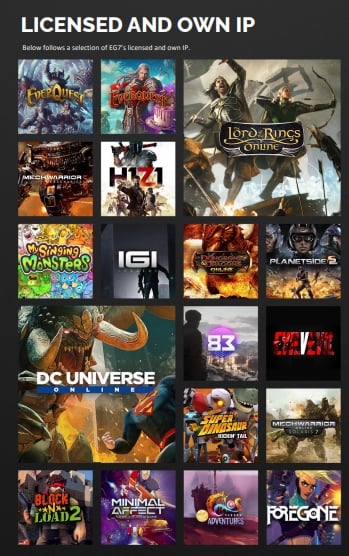 Source: Daybreak, YouTube, EG7. Thanks to everyone who pinged us about this!
Advertisement