An amazing thing happened on my way to the MMO variety store: I got completely sucked back in to Elder Scrolls Online. It did not come at a convenient time, what with New World’s launch and all, but sometimes you can’t help when your interest in an MMORPG ignites. The long and the short of it is that I’ve been having a better time in ESO than pretty much any MMO this year to date, and so I’m tip-toeing into this column space to share a few thoughts on it.

END_OF_DOCUMENT_TOKEN_TO_BE_REPLACED
For my debut topic, I wanted to analyze what I feel is the single best feature of Elder Scrolls Online: its quest system. While I generally like quests and narrative in MMOs, there’s something about the way ESO does its style that works incredibly well. And to get at the truth of it, we’re going to slice it open and spread its organs on the table for a closer look. 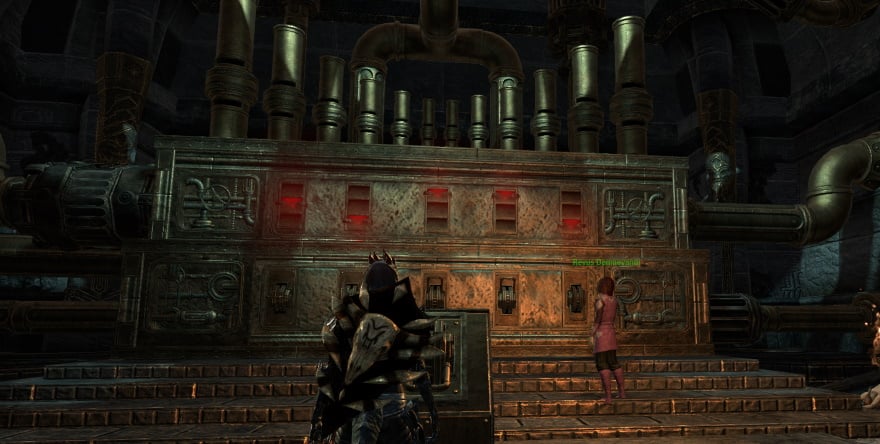 One thing that any ESO neophyte notices is that, unlike your average WoW-clone, this game boasts a relatively smaller quest list overall. The focus here isn’t on sheer quantity but rather on more involvement, storytelling, and quality in the quests it does have. For MMORPGs that take this route — RuneScape, Secret World, and Star Trek Online come to mind — the end result are quests that actually feel like full and interesting experiences rather than a chore that got done along the way.

I’ve become a loud proponent of such quest design because it ends up being an overall more engaging journey for the player. Instead of seeing our task list flooded with a dozen to-do items, we’re given one quest at a time, usually with only a single objective (although you do see quests branch out in options and objectives on occasion). It allows the player to focus on the current journey, tracking the story from start to end.

While there are those larger quest arcs that cover the base game and each chapter, a large majority of ESO’s quests are self-contained stories. Sometimes they’re quick, one-and-one events, but more often than not the care that goes into the mission mean that you’re in for a good half-hour (more or less) of developments until the final denouement is pronounced. It’s like… getting an episode of your favorite TV show. It takes some time to get through it, but it’s hopefully very memorable by the time the end credits arrive.

One MMO design element that drives me batty is how most games will give you a couple of paragraphs of text to justify the tasks you’ll be undertaking, but that will be all of the “story” you’ll usually get. You accept the quest, go out and Do The Thing, and come back for a paltry “Thanks a lot, hero” and some rewards. It’s functional, but it’s not fun.

Contrast that with Elder Scrolls Online’s style, which is to bring quests back to the days of tabletop roleplaying. Thought is clearly given to points that many MMOs jettison: How does the player first encounter this quest? What’s the hook that draws you into it? What developments and twists happen along the way? How are the inhabitants of the world changed by the end? What is the final result?

Instead of merely getting the bare minimum of a beginning, an ESO quest has a definite beginning, middle, and end. It’s a true arc, often playing out in surprising ways.

The use of NPC scripting is an element that I’ve praised a lot on the MOP Podcast, and I’ll repeat it here. Having characters come and go and do things during your quest make a bigger difference than you’d think. I’ve had a quest start by an NPC who falls out of a second-story window, dusts himself off, and then introduces himself. I’ve had NPCs go rogue on me in the middle of a quest to my astonished, “Nooo!” And I always stick around for the “end credits” of a quest, where a short scene may play out after the quest completion. Beyond that, you can usually go up to NPCs after the quest and talk to them more about their experiences.

Additionally, the voice work helps so much. The brief conversations with these characters and the interesting choices of dialogue options helps to make that connection between me (the player) and the agent or purpose of the quest (the NPC). Plus, so often it is outright laugh-out-loud funny.

Recently, I’ve been playing back through Morrowind and (re)enjoying every second of it. I decided to track one questline in particular to recount for you, because it’s a good example of how ESO knocks questing out of the park. Obviously, there will be spoilers from here on out, in case you haven’t played this yet.

The two quests in question, A Melodic Mistake and Hatching a Plan, take place in a backwater town named Gnisis. When you get there, you stumble on some sort of crisis that’s taking place in the local egg mine. As you try to wrap your head around the fact that these inhabitants willingly go underground to “mine” giant bug eggs, you’re asked to investigate a mystery that’s driving the miners insane.

The journey down into the mine is downright creepy, especially as the screen shakes with a series of ominous notes and insane NPCs pop up, babbling what appears to be nonsense. Oh, and the bug queen’s been dismembered — by her own children.

The source of this problem, the player discovers, is this giant Dwarven music machine that some guy named Revus started tinkering with. Instead of emitting bug-affirming tunes, now it’s made everyone go crazy. To solve this, the player has to listen to the notes and change the machine to match.

Even as that crisis resolves, there’s a larger one in the fact that the mine is now defunct without a bug queen. So Revus, feeling (rightly) responsible for the situation, sets out on a quest to find a replacement egg — with your help, of course. This kind of becomes a comedy of errors, including some poop-digging and the recruitment of a horribly tone-deaf bard who literally sings himself to death.

Then it’s back into the creepy mine with the replacement egg — which is currently hatching — and a desperate last-minute effort to get the new queen to bond with the orphaned bugs below. After the dust settled and the queen made her new home, the townsfolk reluctantly thank Revus while acknowledging that his actions ended up hurting others and killing at least one person.

And that weird, silly, and sometimes unsettling quest series is but one of many packed into this game. They’re not all winners, of course, but enough are that I can’t wait to find more. That’s why I keep playing.

Traverse the troubled land of Tamriel in the Elder Scrolls Online! Let us be your guides here in Tamriel Infinium on Wednesdays as we explore together the world created by ZeniMax and Bethesda in one of the biggest MMOs in the genre. Justin and Ben welcome questions and topic ideas!
Advertisement