END_OF_DOCUMENT_TOKEN_TO_BE_REPLACED
If you thought Path of Exile’s previous three content updates would be hard acts to follow, you clearly haven’t heard enough about the upcoming Act IV The Awakening. Slated for a June release, this expansion makes such a huge impact on the game that it will have its own closed beta test! Along with additional story, new mobs and legendary bosses, brand-new areas, powerful new skills, and plenty of unique gear, Act IV includes a slew of user interface improvements, a complete rebalancing of the core game, and what may be the most shocking announcement for players of this popular OARPG: a modifiable passive tree. On top of that, PoE will launch internationally with localization for Chinese, Russian, and Thai players.

Oh yes, Act IV will be the hard act to follow.

With such major changes coming, we beamed in for a remote press demo hosted by Grinding Gear Games’ Chris Wilson, who is both producer and lead designer for PoE, to get the details on what players can expect once those closed beta doors open on April 20th. 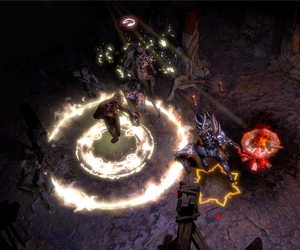 The story behind it all

Wilson told me that his team wanted a huge expansion with new areas and tons of new mobs ever since the game released in 2013. However, the scope of that dream was so vast that it would take a couple of years to create. So what did the team do? “We’ve had a dedicated team on it since the release of the game,” Wilson explained. A second team was formed, with one working on the big expansion and the other working on the three smaller updates that have been released over the last two years.

Players who are itching for new content and new story will be plenty pleased by The Awakened. Plenty of new interactive environments — from mines to gladiatorial arenas to dried lakes to aqueducts to lava-filled caves — are filled with new creatures to defeat. How do these various landscapes and new creatures fit into the PoE story? Wilson told me that one theme of this expansion is that the dreams of certain historical characters are being manifested as reality. He said,

“The act takes place around a mining town called Highgate. Deep inside the mines, the miners have found and ancient beast that’s been asleep. Every few hundred years the beast wakes up and causes a cataclysm that wipes out all the life on this continent. When it does so, it captures all the souls of the people that were alive then, and while it’s sleeping it manifests the absorbed historical heroes’ dreams as areas.”

So when players encounter the nine major bosses, they will actually be fighting figures from Path of Exile’s history that they’ve learned about from NPCs, lore, talking stones, or even from the history of coveted gear (as in the case with Kaom of Kaom’s Heart armor).

The dream origin also opens the door to more fantastical creatures than usual, like giant birds with bows. Wilson shared the reasoning behind this unexpected new creature as well as the arenas and bulls that players will find: These now-all-too-real dreamscapes were abstract views on illegal and legal competitive fighting. He also showed off other influences to the environments and creatures, which include New Zealand (GGG is based in NZ) mythology and the Maori culture (you can see the latter in the huts!).

The Awakening’s claim to fame as the largest content addition to the game to date is not limited to just the environment; players will have plenty of new skills to utilize in their builds. Wilson said that the new warcries were implemented because the team “wanted to reward players for getting up close to monsters.” So those who like to wade right into the thick of battle will have extra power at their command that will also benefit the party. For instance, the warcry Abyssal Cry not only slows enemies but causes them to explode upon death, dealing more damage to surrounding mobs in a chain reaction.

Although warcries have been mentioned to players before, devs are surprising players with a new type of minion. Unlike current hordes of zombies or skeletons, only a single elemental golem can be active and fighting by your side at any given time. These golems come in three fighting styles: ice (melee), fire (ranged), and chaos (mix of ranged and melee with ability to bypass energy shields). Golems are even more powerful once they are specialized.

What might be most shocking to players is the drastic change for the passive tree: It’s modifiable! Already widely known for its depth, the passive tree is taking customization to a whole new level. Wilson stated that the team wanted this system to be more more dynamic, and this is the way the devs want to do it.

Here’s the basic premise: At different points in the passive tree, there will be open sockets that players can fill with jewels once they reach that spot. Currently there are about 24 open slots (but the team is working on increasing that number), and jewels can be swapped in and out whenever wanted with few exceptions.

What exactly do the jewels do? They add a passive to your tree that is tailored to what you want. For instances, one jewel might increase attack speed and give a bonus to axes. Someone who wants said bonuses would want to slot it. Most jewels have various random properties that are generated when dropped as loot; blue jewels have two properties, and yellow ones have four. Wilson explained that the philosophy for the properties is to be mostly good instead of mostly bad. It can be a trade-off if some properties are beneficial to you while others aren’t, but players will also be able to modify and customize these jewels to an extent as well as trade them with others. 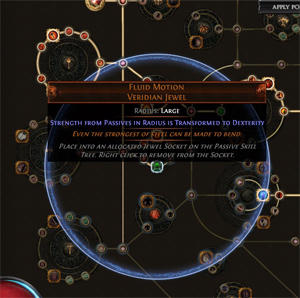 A few jewels, however, are pre-designed by the devs and won’t change. These brand-name jewels will likely be very highly sought after for their special properties. How special are they? Some are simple, and only the fact that the property is set makes it valuable to a player who needs it. Others, however, have a literal sphere of influence and will change whole sections of the tree by modifying the properties of all the passives around them. An example that Wilson gave is a jewel that changes all of the strength bonuses in the radius into dexterity or tune non-bow weaponry stats for bows. Threshold jewels will turn on and give special bonuses once a certain requirement is met, such as having 60 intelligence allocated within the radius. Another jewel allows players to obtain a certain number of passives in the area without having to spend points on connecting passives, thereby saving levels worth of points. The Sleepless Leadership jewel allows you to gift all the passives within the radius to your minions instead of yourself.

Be ready for beta

It’s not often that you hear of a released game going into beta, but because the changes to PoE are so sweeping, a beta is necessary. Wilson told me that the testing is expected to last six to eight weeks (ideally fewer). And because the changes start from the very beginning, so too must all testers: Everyone in the beta will create a fresh character. Wilson emphasized that this is to get valuable feedback on whether the overhaul is too hard or too easy as players go through the game linearly, something that can’t be determined by high-level characters charging through the content. The team is serious of making sure the balance is right. If you are interested in participating in this beta, you can sign up via the official site.