Do you miss Vanguard? It’s been a while now since that particular fantasy world closed its doors to players, but warm memories of the game continue to persist among former fans. Reader PJ sent in several screenshots of Vanguard, although he says that he unfortunately lost most of his pictures.

I like this one because of the perspective. It’s not only pretty, but when you see the tiny character on the right, you develop a whole new appreciation of the scope of this area.

We’ve got a great tour of the sights of MMOs for you today, so let’s get this party started! 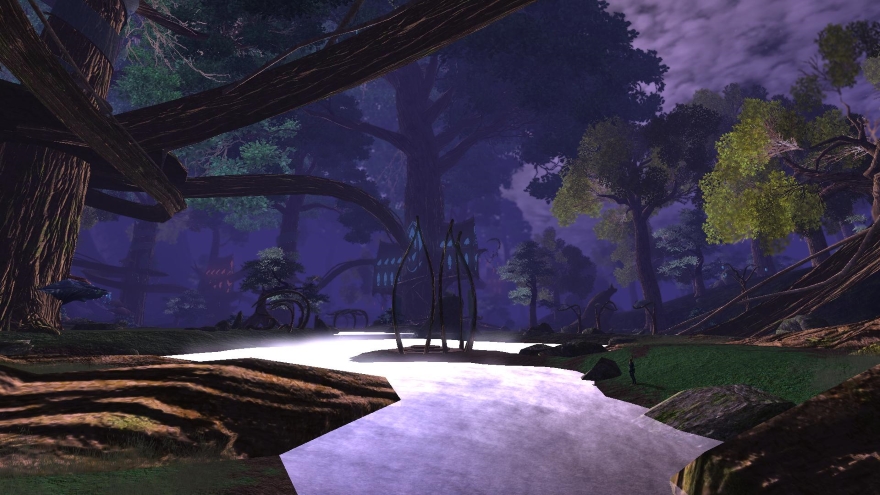 “I’m willing to bet that many of you, like I, take screenshots of odd little details that you happen to notice in the game,” Reader Kaaz said. “While exploring through Issue 7 in The Secret World there are some crates you can jump to the other side of, and this picture is what you find on the other side.

“It’s a slice of summer in the middle of an Orochi Facility, not to mention a person who couldn’t deal with the experiments that went on there and committed suicide in a corner. It added a bit of a face and a conscience to the Orochi Corporation for me, that the people on the field didn’t necessarily agree with the orders from above.” 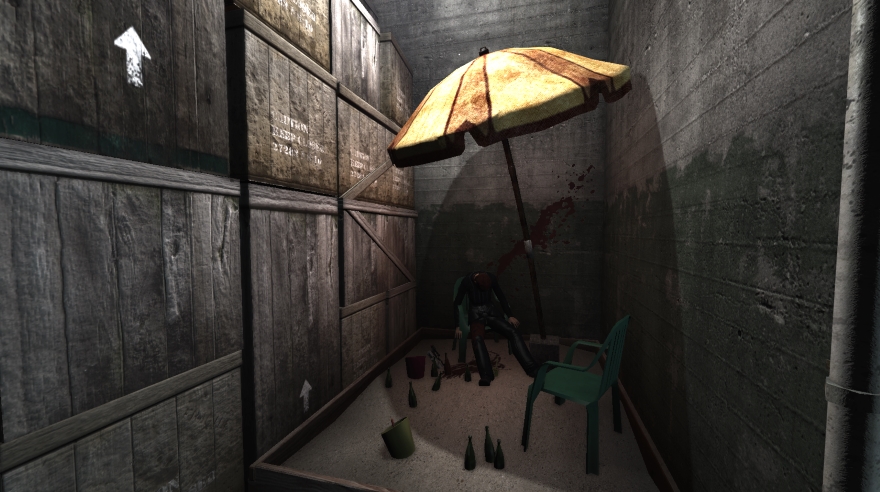 You all sure love your Final Fantasy XIV. Worn out those screenshot keys yet? I don’t blame you, I took a lot myself when I was trying out the game. Really pretty stuff — and weird stuff, too.

Reader UpfrontSalmon posits this aerial mystery: “No one knows what it is. No one knows who is flying it. If you’re trawling around the new zones you can occasionally spot this lonely, ominous vessel half-hidden by the clouds slowly passing through on its way to who-knows-where. Future content? Mysterious flavor? TUNE IN NEXT TIME TO FIND OUT.” 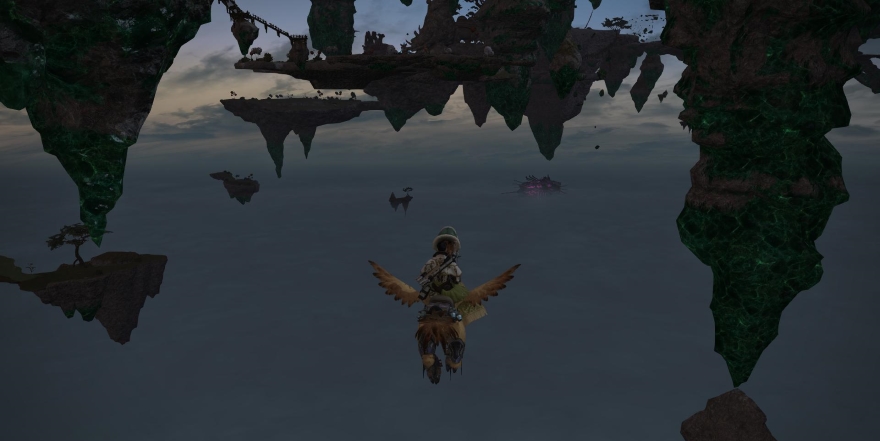 Do you ever try to emulate something old in a newer game? Reader Faction 3 did by decking out his character in Guild Wars 2 to look like a class from the first game.

“Here’s a ‘present’ from the past (see what I did there?),” he writes. “It’s my newly minted Mesmer rocking the look of the old Guild Wars Mesmers, only in a more updated way. All I need is a Rogue Bull and a Cane.” 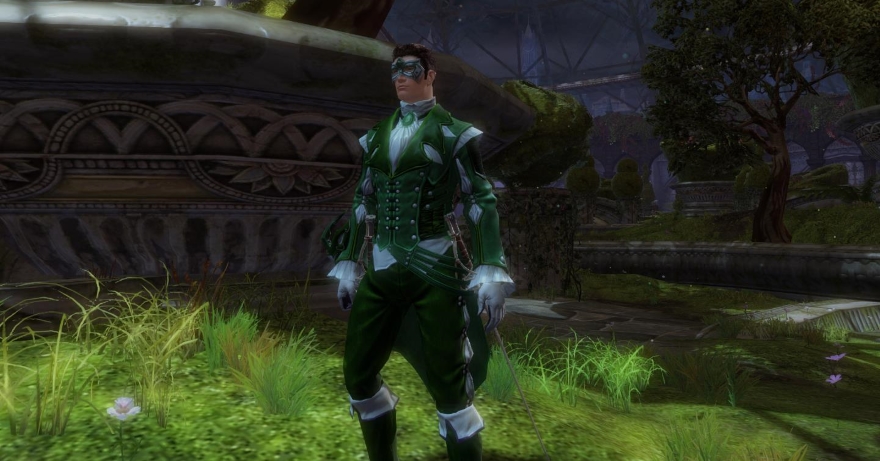 For this week’s It Came from the Comments! pick, how could I not feature the Hot Dog King from Trove? I love this so much, it might just become my new avatar.

“I do have to post this one of a club world I came across yesterday in Trove,” Reader Siphaed said. “The whole thing is pretty advanced as there are two more giant wieners about half that size forming a dueling arch behind me (out of screen). Under the wiener there are four underground levels, including one giant soccer stadium as well. That club is very, very cool.”

Need a screenshot challenge? Sure you do. How about sending in your favorite skybox pic from an MMO? Sunrises, sunsets, moons, stars, clouds, lens flares — whatever strikes your fancy!

zyrusticae Its really this good? I watched stream for like 15 mins and cought myself thinking that I want to try it out.

zyrusticae one of my fav rpgs on ps3, i really hope this comes out in english somewhere

Xephyr SirMysk I kind of wondered. Apologies, I should’ve went with my gut. Anyway here are a few quick & dirty shots of it on my vamp. I still need to fix her vamp face, but the outfit looks nice. :)

SirMysk Xephyr not a man, but you’re welcome. :P

Xephyr SirMysk You = a gentleman, thanks!

deekay_zero Damonvile I have a mega, the dolphins, a sarco, and a spino all for water. Dolphins have the best speed and turn radius, but Spinos can go backwards in the water!

Mesmer’s outfit is ON POINT. Huge props to however did it, and especially with a human male avatar.

zyrusticae TL;DR: naw man, its worth the read. DD HAS TO HAPPEN IN EU/NA.

So. Dragon’s Dogma Online.
No English version, but you know what? I don’t care! THIS GAME IS AMAZING. It is the best damn online action-RPG I have ever, EVER, experienced! And it’s a further nail in the coffin for my enthusiasm for standard themepark ‘dozens of people in a single instance’ massively multiplayer designs. I don’t need that stuff anymore. This game is IT. This is all I need.
Where to even begin? Guess I’ll start at the very beginning:
Character creation is excellent. It is almost a direct port of the character creation in the original, but with more stuff, making it one of the best character creators in the whole business. Unlike pretty much every other character creator I can think of, you can make convincing children, teenagers, elderly people, fat people (as in actually obese and not just ‘has a beer belly’), muscular androgynous amazon women, cute and feminine men, and everything in-between. You can even pick between a feminine and masculine stance. The only thing you can’t do… is make a character with traditionally perfect and spotless features like you often see in Japanese games. You can still, of course, make some pretty attractive characters, but they never seem to edge into the realm of ‘doll-like’ like you can often see in, say, Square Enix’s games.
The game’s format is very reminiscent of Guild Wars 1, in that you have a lobby where all the players can meet and interact, and the open world only includes other players in your party, as well as pawns (your AI companions, two of which you can summon, and one of which is one you created and manage – kind of like retainers in FFXIV, except they actually fight with you in the field). Instead of picking dungeons from a list and queuing up – which, to be clear, is still an option in this game – you can physically run into each and every dungeon with your party from the open world and it all feels much more cohesive and seamless and, dare I say, immersive than other heavily-instanced games.
They’ve clearly taken advantage of the fact that the game is built this way, as the world is actually designed to make sense in a way that regular MMORPGs often cannot. You’ll see rabbits and deer foraging for food, livestock milling about (with chicken coops and everything), loads and loads of gatherables, and no random players mucking about to ruin your sense that this is a game world rather than just a playground.
Adding to this general sense of immersion is the game’s movement system, which is a lot more sensible and realistic (your characters’ supernatural stamina aside) than anything else you’ll play. You can hoist yourself up ledges, go into a running sprint, jump off a cliff edge, and roll to distribute momentum once you hit the bottom (obviously doesn’t work if you hit terminal velocity). Your character has a distinct sense of momentum without feeling unresponsive, and it’s often fun just to run around and climb stuff at random. (And unlike Blade & Soul, the game has no invisible walls that I’ve run into, making the whole thing feel much better.)
Combat is Dragon’s Dogma, except online with co-op. And it is the best damn thing you will ever play with other people. IT IS SO GOOD YOU GUYS, YOU DON’T EVEN KNOW. This is top-tier action RPG combat, with a great sense of force and power in each of your blows, and a great number of options to manipulate the battlefield to your advantage. And you can climb monsters! You can climb onto them and stab them in the face! How many other games can you think of that let you do that?! NONE, THAT’S HOW MANY. (Mind you, I played Fighter, which was the most popular class in the closed beta hands-down, and I heard bad things about how boring it is to play Priest, so YMMV. May change at higher levels, mind you.)
The combat single-handedly carries the game to absolute victory in my mind. I play this game just because I want to play it. Not because I want to chase more carrots and raise more numbers, but because I just want to experience more. Every boss fight feels epic (yes, as in the actual meaning of the world) and glorious in ways that surpass pretty much every other game I’ve ever laid hands on. And yes, that includes the Souls series. Bosses are incredibly tough and have some really amazing movesets that really bring them to life. The first time you feast your eyes on a lindwurm you will be in awe. And the music! So. Good.
And the best part is… the netcode doesn’t suck animal droppings! Where Blade & Soul becomes completely unplayable after a certain latency threshold, this game is barely even affected. This is because, like PSO2, it only waits to register hits and not commands, meaning that the game still plays incredibly smoothly even with my overseas foreigner latency. It also only requires the server check in multiplayer sessions, meaning solo runs are effectively the same as playing offline. And that seals it for me. This is my game. This is all I need. I don’t even know if I’ll be there for Blade & Soul’s launch anymore, the game is THAT good to me.
It’s so good that I think it’s entirely worth running around the various hoops (registering an account and getting through the IP block with a VPN, and of course, the actual hard language barrier) just for the chance to experience it. Where I really wouldn’t make that recommendation for a game like B&S, even, and I love that game. This? This is something you have to experience, folks. Seriously. When this game launches… I’m going to disappear in it for awhile. And I know I’ll love every second of it.

Choose My Adventure: Dungeons and Dragons Online already does so much...