END_OF_DOCUMENT_TOKEN_TO_BE_REPLACED
Destiny 2 may be fudging up left and right, but it still sold a truckton of copies.

That’s according to Superdata, whose most recent revenue report shows Bungie’s new baby holding the #4 spot for PC and #3 spot for console in terms of global revenue for the month of October. “High attach rates for deluxe editions drove the average selling price up,” says the analysis firm, while digital games’ growth across the board “was underpinned by a 28% jump in premium PC thanks to Destiny 2’s successful BattleNet launch, and the continued blockbuster hit of PlayerUnknown’s Battlegrounds.”

Indeed, PUBG blew past D2 on PC to claim the #2 spot, right behind League of Legends. The real competitor for PUBG, however, is Epic’s Fortnite, which startled the PvE playerbase it had cultivated with a quality battle royale mode earlier this fall.

“While Fortnite has seen a higher out-of-the-gate active user base thanks to its F2P status, the game’s long-term success vs. its major and earlier-released rival is uncertain,” writes SuperData.”

“Fortnite: Battle Royale’s MAU has grown larger than PUBG’s in the month of October across PC and console. Still, Fortnite’s total revenue is a fraction of PUBG’s due to the former being a free-to-play title compared to PUBG’s $30 price point. But Fortnite has a leg up on the additional content front, having already introduced cosmetic microtransactions through an in-game cash shop late in October. The challenge will be converting its higher user base into spenders. December will be an important month for both games; PUBG will be releasing exclusively on XB1 on December 12th and will be leaving Steam Early Access on Steam in ‘late December’ with a new map. Fortnite will, presumably, leverage their cash shop and introduce Christmas-themed cosmetics and will have to fight PUBG for user’s attention on XB1.”

Dungeon Fighter Online continues slipping down the lists after years of claiming a top spot, while World of Warcraft and World of Tanks each dropped a place thanks to the entry of Destiny 2 on PC. You’ll also notice that ROBLOX has returned to the top 10 and that Overwatch has vanished from the chart for both PC and console.

On the mobile side, Lineage M and Lineage 2 Revolution both surged in the rankings to #3 and #6 respectively.

We live in interesting times. 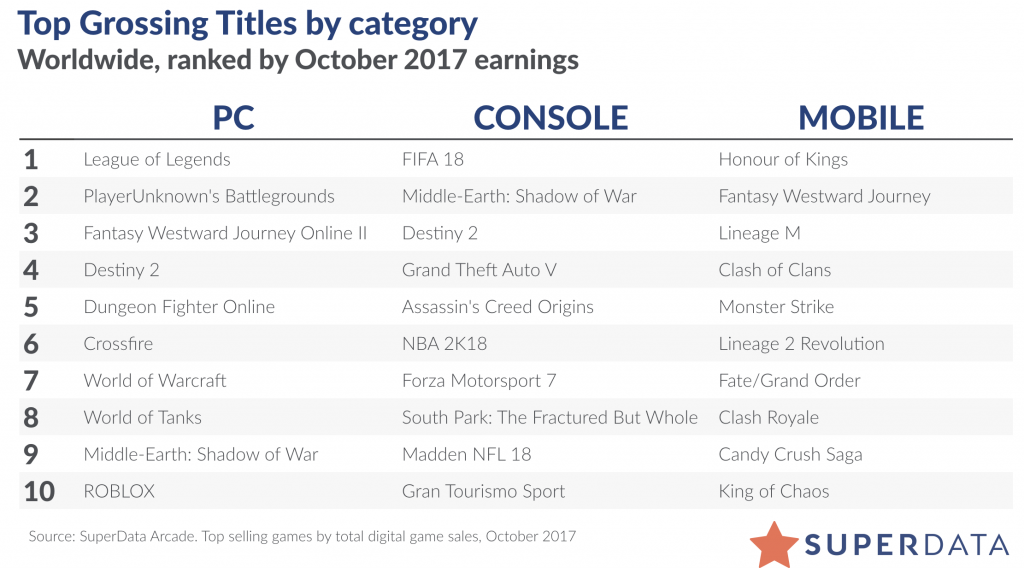