I ask for “camp” from all of you — and camp is what I got, although not necessarily what I envisioned. Sometimes it’s better than that! So what did Rees Racer immediately go to when I requested pictures of summer camp?

“There’s no pretending TERA is an open-world sandbox,” he said. “It is straight-up themepark. This means there are plenty of towns (large and small) along with various and sundry other quest hubs cleverly disguised as camps. I’m having good fun leveling the newest Valkyrie class, and here she is during a brief respite at the Desert Research Station in Val Aureum.”

May I float the suggestion that saddling a lion and pulling on its mane while shouting “GIDDYUP!” only has one logical and unfortunate conclusion? 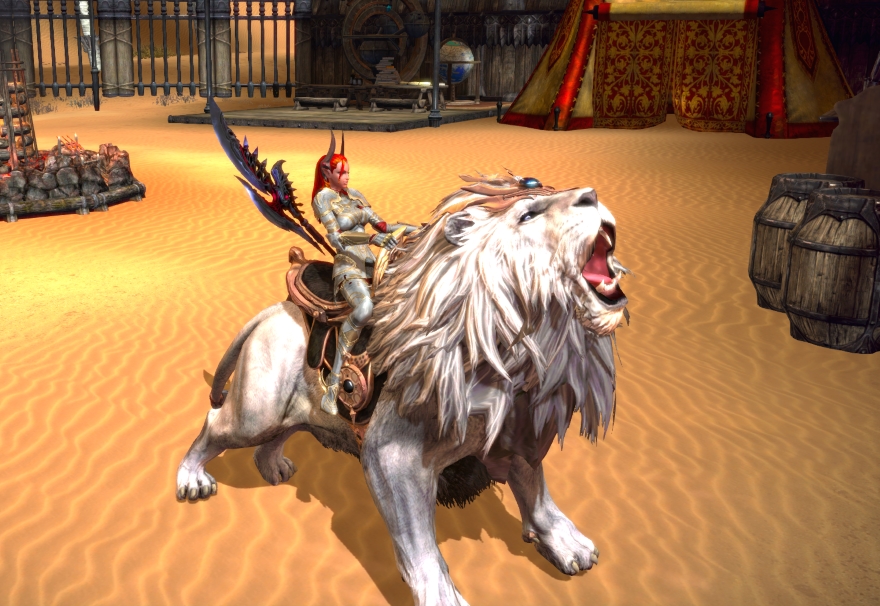 Of course, you can always take time off of your World of Warcraft conquests to head to the beach, take in the surf (is there surf anywhere in this game?), and make passes at the beach bunnies while sipping on a mana-restoring drink.

While you’re there, make sure to say hi to Utakata. Autographs and pictures available for an extra fee upon request. 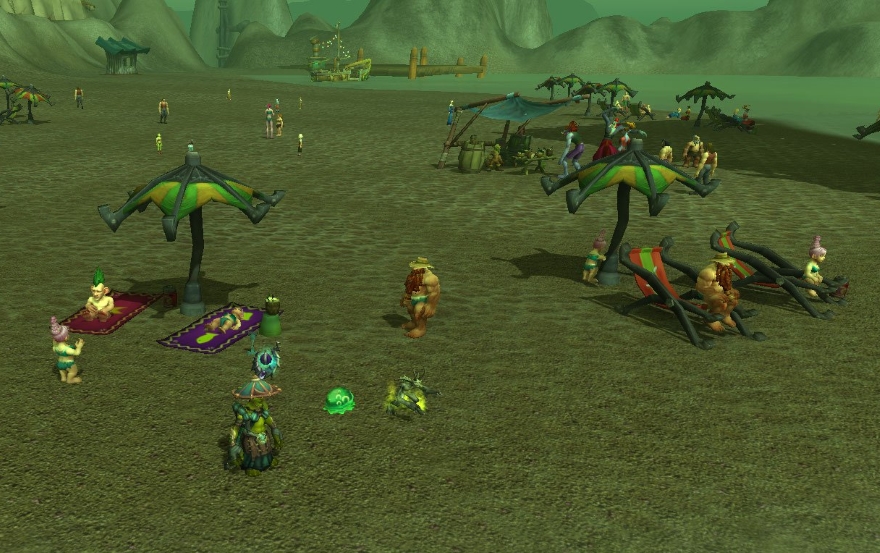 Meanwhile over in Guild Wars 2, the natives have come up with an… incredibly odd tradition that I’m going to label “cartography camping.”

“You can’t get lost while camping in the wild, if you have your tent made of maps, am I right?” said Miol. “But also, don’t forget to take some extra globes with you, to be sure!”

I bet these players are the same people who wrap birthday and Christmas presents in the Sunday comic strip section. 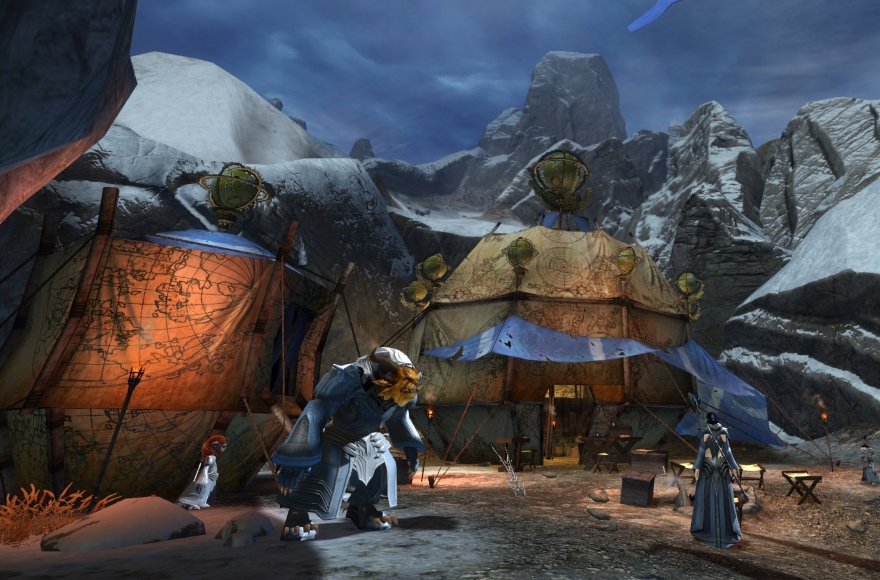 How’s Stormblood treating you, FFXIV people? Oh, you’re too busy playing to actually read this. Well, hope we see some cool screenshots from the expansion soon!

Skoryy wanted to share her character’s “Monking” around. That is just two letters away from a much more interesting class, in my opinion! 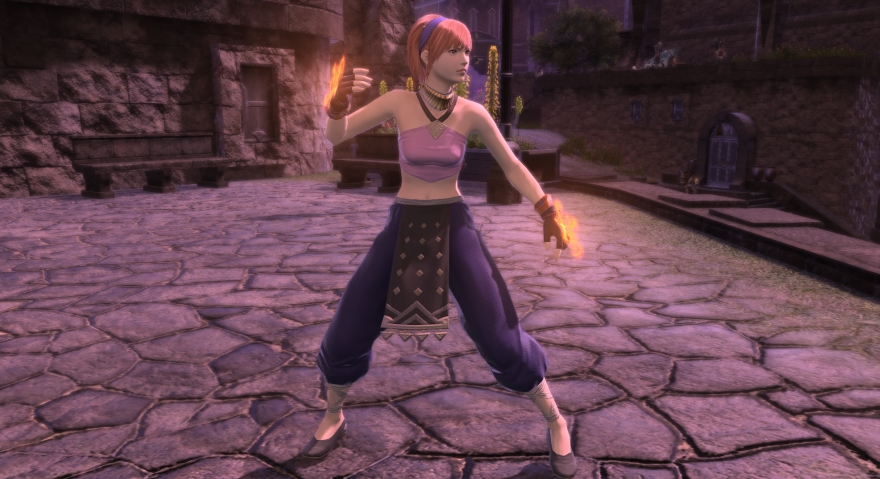 “That moment when you walk up a ramp in Elder Scrolls Online and immediately stop to buff up, ’cause you know there is a probably a big fight about to happen as soon as you walk in the middle of the area,” said Zulika Mi-Nam.

It’s probably going to be some pissed-off lion with a grudge against humans that dared to ride it around like a pony. 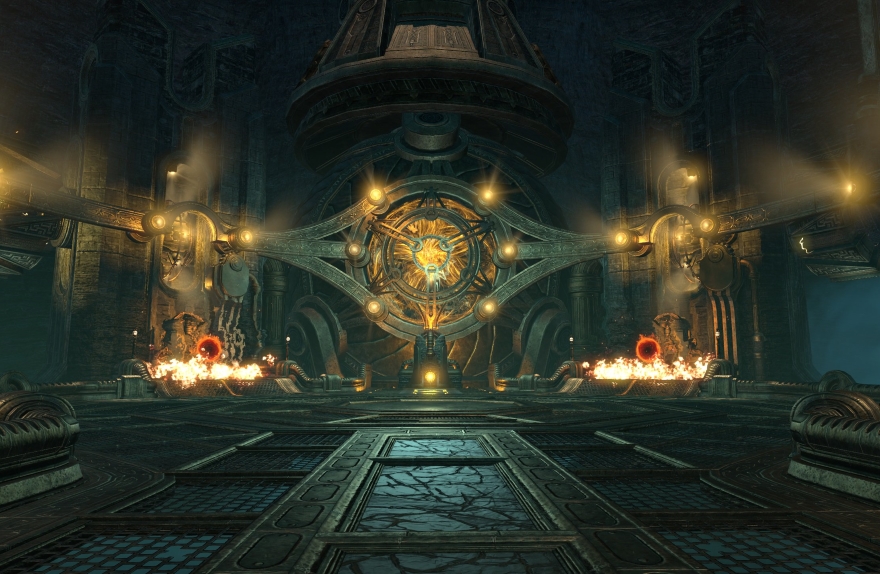 Tried out any new games or expansions this summer so far? This week’s screenshot challenge is to load us up on all of the visuals from your daring adventures in unexplored territory!

Oh yes…and before I forget, thank you posting contribution again Mr. Justin. It is noted, that you seem to appreciate my Goblins more than you do my Gnomes, Elin’s, or Lyn’s. That’s fine…not everyone has the same likings as mine.

That said, I apologize for the crudeness of my WoW image sampled. As it was out in a modified Vanilla zone, and it certainly shows its age….when everything was designed in brute polygon fashion to run on a toaster. A far cry from the zones after Vanilla in its enriched poly count and texturing.

A daring adventure? Well the following is a screenie of my first trip to Kanda Vihar in BnS. Beautiful and ominous, somewhere in all that wondrous gloom are two raids culminating in the Black Tower.

“I got a bad feeling about this.”

Continuing speluking the cave map of the newest episode! ;P

It actually demonstrates its own microclimate, with its continuous evaporation condensation cycle! Possibly a reference to the world’s largest known cave passage cross-section, Vietnam’s Hang Sơn Đoòng, which also exhibits one!

Trust me. It’s not as smexy as it sounds. o.O

In Twilight Highland, i found a dwarf with a lute, a 7 years old sigh that .. maybe, possibly, probably not but i hope … there will be bard class in WoW, right Blizzard? next expansion? pirate expansion?

I didn’t try new games or expansions, but at least i started a goblin character, look at that restaurant sign, Kezan should be in all lists of places you should never eat in.

I found Ninja/Pirate/Orcs in WoW, they walk on water so they are ninja, they have pirate swords, and the are green with almost flat face, so they are orcs!

Many adventurers have succumbed to despair after finding their careers as the Warrior of Light cut short by the impenetrable wall that is the Bull of Ala Mhigo.

Me: “This is pretty morbid looking.”
Catgirl: “Expansion feels though :c”
Me: “That is pretty accurate. lol”
Catgirl and Catboy: “lol”

Been busy in both GW2 and Ark lately.

I just finished my 6th/7th legendary in GW2 after a lucky 350g drop helped me finish off my mystic tribute. Hoping the next legendary they bring out is something I want so I can keep busy until the expansion hits, whenever that is.

Me and some friends got back into Ark again a few months back and have been busy building, taming, farming, and exploring caves. Next step is hatching wyvern eggs, which we will hopefully get started tonight. These are just random shots I’ve collected since we got started.

For whatever reason it’s not letting me post my ark screenshots so here’s an imgur link: http://imgur.com/a/ah9eX

That Axe looks amazing, i just started playing the game so all of that legendary stuff is far away.

This is not necessarily “unexplored territory”, but selection of the the Forest Colony is rarer than some for a skirmish in MWO. The warmer temperature means heat build-up negates some of the power and flexibility of laser boats, and the map is filled with ambush spots and choke-points that make coordinated assaults and long-range weapons a little more difficult to utilise.

This is my newest mech, an Inner Sphere Warhammer “Black Widow”. I have a nice mix of IS and Clan mechs, and whilst I favour the Ebon Jaguar variants most of all, this heavy does a fine job concentrating fire when needed.

Here, my lance approaches the first small canyon near the drop zone. A lovely blue Hellbringer is ahead on the left, and a Hunchback IIC is on the right. The fourth member of my lance is behind me…and the other two lances have been dropped further away on either side.

Every time I’m tempted to play World of Tanks, I’m reminded how much more tactical MWO is comparatively, and how much more mature, sophisticated, and NOT toxic the community is overall.

Yeah not a toxic community but ca. 99% of the forum posts are complaints. They change something and suddenly haters climb out of their holes and cry all over the board. It’s funny and interesting to watch.

I love the game, though, and appreciate the work PGI is doing for a game where you can get everything free in a considerable amount of time(except for the mechbays which are pretty cheap).

The much more interesting class are just knock-off bards who don’t even play their own instruments until level 50. And don’t even get me started on the ‘Head’ quest line.

More character screenshots this week as Eorzea’s version of Skoryy, Skory’a, reveals himself as a defender of the weak, the innocent, and candy drops! En garde!

i rerolled in bdo this week from ranger to DK. so meet nacromanica or i’m not sure how i spelt it but it actually went through on the first try so there’s that.

i decided i don’t like the outfit i bought for her so i’m hiding it until i can buy a new one when i get paid.

She looks great. BDO, yeah, it has an incredible character designer.

i find the controls of the creator a bit clumsy and awkward myself. but this char isn’t too far away from presets in general.

she is pretty tho. tho i have no idea why her scalp is blue as that didn’t appear to be an option LOL

From my experience with the BDO character creator, it looks like that blue was set as the base of her hair color. Which is one of the three color zones you can adjust for hair.

i set all three of the options available to the same white colour. like i said it was odd. :P

i have some cosmetic beauty ticket thing i can check again at some point and adjust :P

Oddly, she isn’t a red head this time. O.o

Here’s the closing cutscene from my favorite quest in my new game for the summer. Spoiler alert, I suppose, but not really.