This week week in MMO crowdfunding, Star Citizen officially broke the $200 million barrier for total funding collected from the proverbial crowd. That’s a lotta ships. Unfortunately, the celebrations over on Reddit took a turn for the dramatic as posts attracted brigaders and were shut down. I’m sure you’re all shocked to hear a platform where popularity-via-one-upsmanship determines relevance still has a brigading problem.

Another fun Star Citizen bit: MOP reader DK pointed me and my spreadsheet-loving self to Star Citizen’s new telemetry page, which basically collects frames-per-second data from everybody actually playing in the alpha and then displays it all in an appealing chart, tracked by game resolution, graphics settings, other CPU usage, graphics tweak programs, drivers, gameplay situation, and so forth (vsync is also on by default, note). It’s pretty interesting to see where your rig would fall on the chart – and note how much the game benefits from having the right combination of CPU and GPU, though there are clearly sweet spots for different combos.

(Thanks to DK, Oleg, Quavers, and Cotic for the SC tips!)

Meanwhile, Elite Dangerous talked up the upcoming Thargoid incursions, Chronicles of Elyria is moving on to server-selection and lock-ins following its map voting period, Project Gorgon now has a demo, and Pantheon snapped up Brasse after Trion foolishly let her go. Read on for more on what’s been up with MMO crowdfunding over the last week and our roundup of all the crowdfunded MMOs we’re following.

Brad McQuaid’s MMO Pantheon has snapped up Trion’s Linda ‘Brasse’ Carlson - Did you wonder where Linda "Brasse" Carlson was going to end up post-Trion Worlds' implosion? Because you had to know she'd end up somewhere; she's a force of nature in…

Star Citizen kicks off a free-fly event next week, welcoming non-backers to play over Thanksgiving - Oh yeah, you know a big holiday is coming up when every single game, even the ones deep in alpha, are cranking out demos and free-to-play events. Star Citizen is…

Crowfall examines its character creation for its first campaign - The first campaign for Crowfall approaches swiftly, which means it's time to take a close look at how you're creating your characters in the game. And it's almost all in…

Legends of Aria will let you own land and rent it out for other people’s houses - The big selling point for Legends of Aria's housing is that the system does not actually require you to build a house on your land. You can let someone else…

Camelot Unchained’s 64-bit client is functional, CSE shows off regional home islands - What were the Camelot Unchained devs up to last week? Continuing work on rubble, the ability system, readied weapons, the particle system, armor mapping, the crafting UI and the animation…

Shroud of the Avatar

I firmly believe this will never launch 100% Scam

My grandchildren will love Star Citizen.

Nice to see people believe SC will be alive and kicking in 40 years.

Is Elite Dangerous going to add avatar FPS game play that they talked about back in the kick starter days?

It’s still in the plan (Apparently) but they won’t talk about any future developments until after the final Chapter of Beyond is released.

lol Shroud still doing telethons. I’d be embarrassed for them but it is funny. For 100K I bet they’d delete the code. 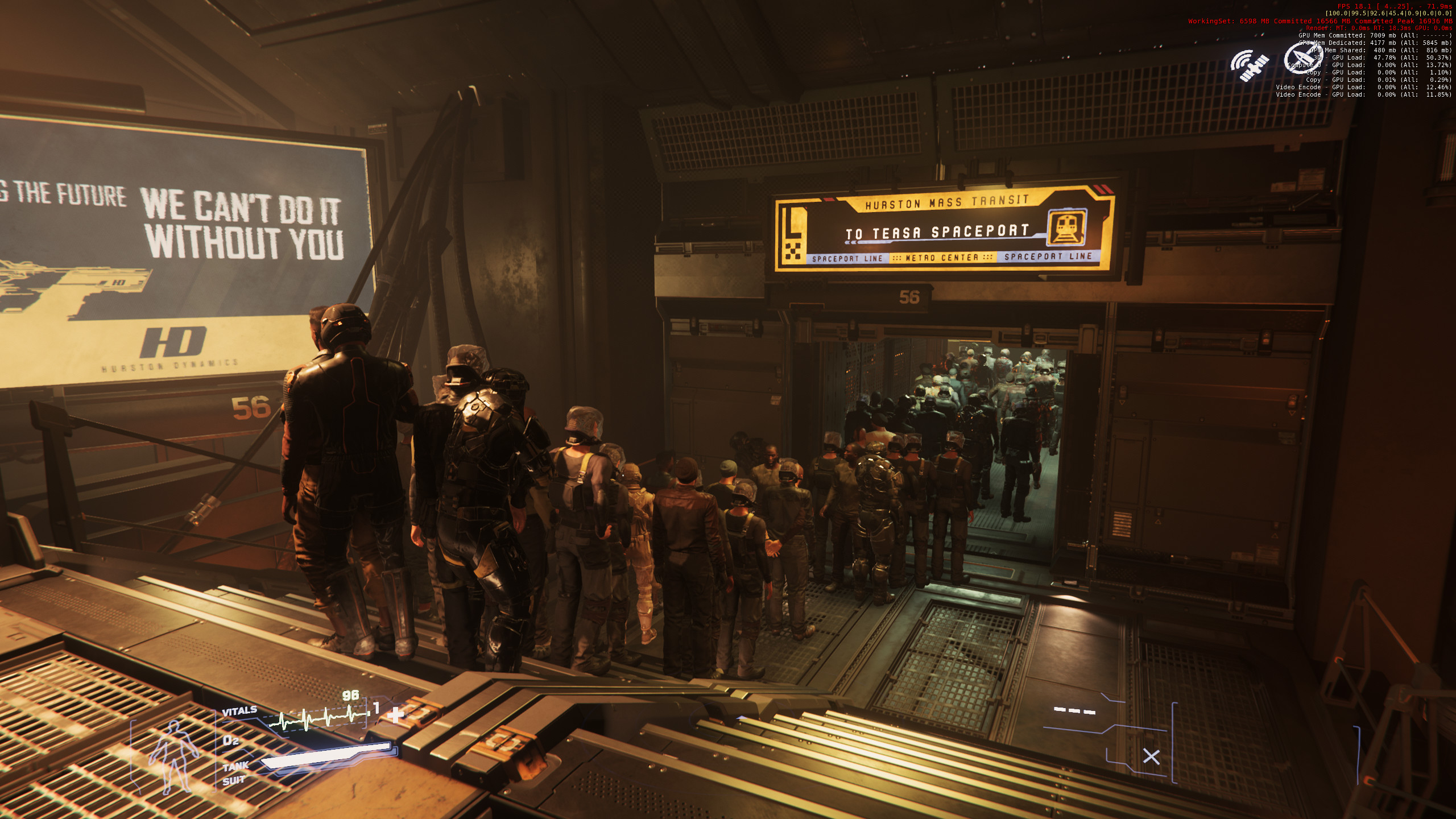 When will they launch a game that people can actually have an opinion on?

Looking forward to the Star Citizen free fly week , I am a firm sceptic of the CIG’s abilities to deliver on what they have promised but I look forward to seeing how it has advanced and whether my computer can run it a little better this time around ( Nvidea 1080 and 16gb ram ) .

Been looking at steam for the Project Gorgon demo but when I click it I only get the option to buy the game itself .

I can’t get the demo download button for Project Gorgon to show up in the client as I already own the game, but it’s a bit down on the page on the website.

I had to Google “brigading problem”, to understand what that was. Not a good thing obviously. Also, the amount of money that this game has raised still boggles my mind. Sheesh.

On the telemetry chart, fascinating stuff. My system does well but not as well as I had hoped for. It’s a Intel i7 8700K @3.70GHz cpu with a Nvidia 1080 TI and it’s only rating low to mid 50s fps wise before I tweak cpu and gpu settings. :/

I wonder how much of that they have spent.

Any idea what their burn rate is?

For 2017 the studio in the UK cost $25 million for 318 employees, there’s a smallish studio in Germany which is 80 staff iirc and they would pay a similar rate ($6.5 million) and then there is the remainer in the US which is around 100 staff but they cost almost twice as much per head according to CR, so another $15.7 million.

A grand total of $47 million per year or thereabout.

It’s roughly $100,000 per employee per year and there is ~1800 man years spent on the game so far by CIG employees, you then have contractors, the Hollywood cast and all that sort of stuff to include.

Rents and marketing are not included in that figure I assume.

Im pretty sure those 200 mil isnt the only money they make. This afaik doesnt included subscribers money, money from selling t-shirts and other mechandise, maybe other sources of income.

Quote: “which is around 100 staff but they cost almost twice as much per head according to CR,”

Also devs salaries start from 44K to 120K for senior leading team. An average of 100K is substantially too high.
Last time I counted ratio of Senior Specialist/leader versus team count it is around 1 for 40 people (depending on team of course). To be deducted also are tax+Gov help to support gaming industry which account for around 6M$ in UK.

TO be added private investors. In short CIG is more than healthy… but of course have to deliver at some point SQ42 then SC to keep cash coming in.

In my experience, the cost per head for full time employees in a large corporation is somewhere about twice the average salary. That includes things like building rent, power, hardware contracts etc.

I’ve also worked with teams where over 90% of the staff were in the senior ranks for their role. If you’re building something like SC then arguably you’re going to want the people at the experienced end of the scale.

I would also suggest a 1:40 ratio is wildly out on any basis as you really don’t want to go over 1:7 (or 1:10 at a stretch) for any form of expertise and/or line management without putting undue pressure on one level in your management/knowledge chain.

Not saying all this is true for Cloud Imperium’s setup of course, but I can easily see how those figures pan out.

No problem Joe, here’s the quote and the source

“We try to be quite smart about development costs, so we do a lot in the UK and two-thirds of our developers are in Europe. It’s far more cost effective. Over here you can have two developers for the price of one in the US. In the places where there’s game development in the US, the price of living is really high. We’re up in Manchester and it’s a lot cheaper to live there than in LA. The average salaries in the industry are less for that reason.”

Quote can be found on page 21 https://issuu.com/newbayeurope/docs/mcv928_27th_october

We’re not talking about salaries though, we’re talking about the whole studio’s operating cost divided by number of employees. The salaries are a small part of the costs, just have a look at Foundry 42’s financials, you’ll see that operating costs were £19.5 million but wages only make up £12 million of that.

Thanks for the link.

Now two devs versus one but from a lower average salary. 65/70K not 100K? And 25% cost back from government. That is a substantial saving to not say huge.

Anyway, they do have enough from past years with mush smaller team to compensate.. Not for ten years of course.
I never been worried about CIG Finance but more about how CR is going to translate is vision of multiple type of gameplay (mining, salvaging, repairing, transport…) into a “big” living universe. And 2019 is definitely a very interesting year with new gameplay/features/performance coming in 2019.

I don’t think that is the case. The cost of prime estate rental is going to be higher in the US, the cost for employee health insurance and all the additional perks they need to offer to be competitive, those are going to add quite a substantial amount to the company’s operating costs. Whether it is as much as $200k is anyone’s guess.

I’m not worried about their finances either but it is something to be aware of, the idea that they have loads in the bank or can keep rolling at this rate for years to come is something people should be cautious about.

what the heck are brigadiers?

Brigadier is a military rank. :D

A “brigader” is when a call to arms is made for a group to go respond to something on the internet.

Imagine a worldwide nerd-alarm for posting.

And that’s proof that some people have way to much free time and need a hobby that doesn’t involve being a jack-wagon. (Not you knowing this, but it existing.)

Thanks – the article was very vague for something you couldn’t really access due to it being shut down.

Seems like you have to inhabit the Reddit space to really have known. Bad writing on the part of the writer for not at least mentioning what the term means when they used it in the article. I had to Google it to figure it out.

I had to ask here :) Not really a common term imo.

I’m honestly shocked people don’t know it, so it didn’t occur to me it needed defining, especially when you can click on the links and see it in action. It’s been in use for ages! :D

But in internet terms an “age” only lasts about a week and a half.

First time I’ve ever heard it. The context clues seemed obvious but still – never had heard it so I had to look around.

The context was enough to suit me, so I didn’t bother looking it up.