If you were skeptical about NCsoft’s Q1 financial report and its confidence about still managing to get Throne and Liberty out the door in 2021, then pat yourself on the back: The game has been delayed into 2023. Of course, this is just one of many delays since the game was originally announced back in 2011 as Lineage Eternal.

According to Ruliweb, which kindly posted its translation of NCsoft’s Q2 2022 conference call, the company has bumped the global launch for T&L off to 2023 as it’s “discussing the best timing and partner for strategic overseas expansion from a strategic point of view” – an apparent nod to reports this week that it’s actually negotiating with Amazon as a western publisher, though it doesn’t expressly mention Amazon and instead refers to “several” potential partners. Apparently, testing is still ongoing internally with over 3000 people, though that’ll expand to incorporate a broader audience “soon.” Analysts asked NCsoft about Throne and Liberty’s business model as well, but NCsoft will say only that it will “avoid excessive pay-to-win.”

NCsoft also says it’s plotting four new global titles for next year, including Blade & Soul S and Project R (neither is an MMO), with additional titles in 2024. Aion 2, the console-based Project M, and an “oriental MMORPG” dubbed Project E are also on deck. And just in case that’s a little too much good news for you, NCsoft talks up its Web 3.0/NFT strategy with Lineage W.

As for the investor report itself, NCsoft is currently weathering a 20% drop in revenues for the quarter when compared to Q2 2021, owing to the “stabilization of Lineage W and decline in Lineage 2M sales.” Yep, mobile can shrink as quickly as it blows up. There’s a bit more good news for western MMO players buried in here though, as NCsoft is crowing about Guild Wars 2’s End of Dragons, which in spite of launching in Q1 propelled the company’s PC segment to a 3% quarter-over-quarter revenue increase in Q2 as well (and represented one of Guild Wars 2’s best quarters in years following several other big-for-GW2 quarters). In other words, it’s pretty clear why ArenaNet is working on another expansion. 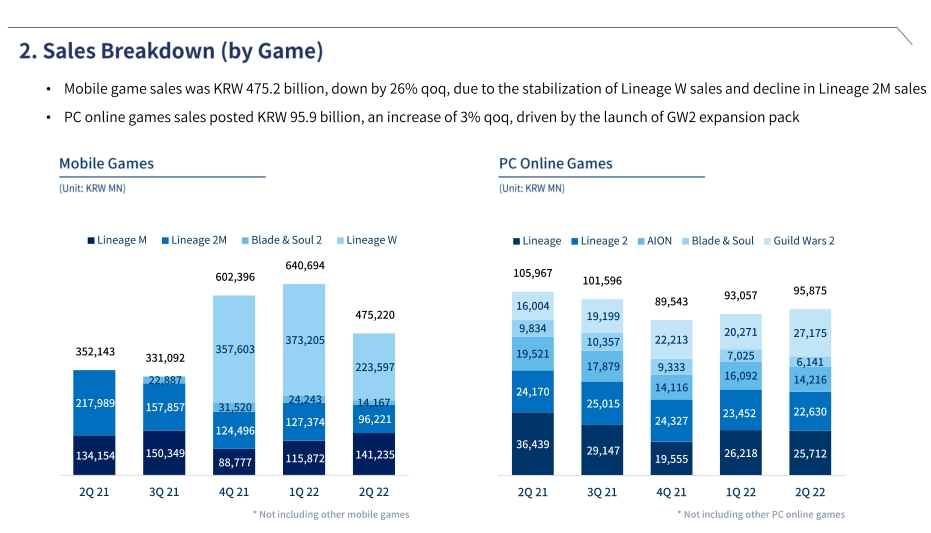 Perfect Ten: Recent promising MMOs that died before they were born