Over the years that I’ve been writing The Game Archaeologist, I’ve received more than a few requests to cover a game that was completely unknown to me: The 4th Coming. It sounded like one of the lesser MUDs, so I stuck it in the backlog to investigate at some point.

Now that I’ve finally come around to looking into this title, I’ve discovered that The 4th Coming is actually one of the earliest — if not the earliest — online action RPGs, much in the same vein as today’s Path of Exile and Marvel Heroes. It makes sense that someone would seek to capitalize off of the explosive success of 1996’s Diablo, and that someone turned out to be Montreal-based Vircom Interactive.

Despite being one of the scant few ’90s graphical MMO pioneers, The 4th Coming’s legacy has been far outshadowed by its contemporaries and titles that followed. Today we’re going to see if we can’t deliver its due by looking at what this ARPG created.

Vircom Interactive had previous dipped its toes into online gaming by creating a few bulletin board system (BBS) games back in the ’90s but decided to take it to the next level by creating a graphically lush persistent world, filling it with monsters, and sending players to slash their way through it. The studio called it The 4th Coming.

It was hard to miss the obvious Diablo inspirations behind this title, particularly with its isometric design, similar interface (down to the inventory screen), and click-fest nature. Yet Vircom had aspirations of going beyond a mere clone to create something more narratively substantial, creating sweeping storylines and deep quests for adventurers who wanted to immerse themselves in this world.

The base edition for The 4th Coming came out in 1998 in multiple markets, although many consider the real launch of the game to have taken place a year later on May 14th, 1999. It was then that Vircom revamped many of the titles key features, including the UI, group support, and chat rooms, bringing the game up to version 1.10.

Despite being overshadowed by newer 3-D titles, The 4th Coming actually met moderate success heading into the early 2000s. It reportedly garnered as large as a 350,000-member playerbase and continued to introduce content updates such as 2001’s The 4th Prophecy. Yes sir, this was one action RPG that hit the market at the right time and ran all out.

Apart from quests that were a cut above the industry’s rather skimpy standard, The 4th Coming was a fairly straightforward game. Upon starting it, you would answer four questions that would result in a certain stat distribution (and could roll for more stat points thereafter). Once that was done and you’d chosen your race (Elf, Dwarf, or human), you’d enter the world and make your own path to fame or folly.

The 4th Coming eschewed a structured class design and instead allowed players to gradually shape their character’s fighting style and abilities. You could wear any armor, wield any weapon, and use any spell, as long as you allocated the stat points for it. There was also a morality system in play, which awarded good and evil points depending on which quests were accepted. Some portions of the game were off-limits or only accessible to those who were deep into the black or white.

A robust chat and guild system allowed for players to socialize and adventure, adding the “massively” element on top of the Diablo formula. However, it was the game’s rebirth feature that was truly ahead of its time.

High-level player characters could be “reborn” as lowbies once again in exchange for higher stats and a pair of wings. Previously good characters became white-winged seraphs while evil characters sported black wings. The developers also created special areas that were out-of-bounds to anyone who wasn’t counted among the angelic caste. 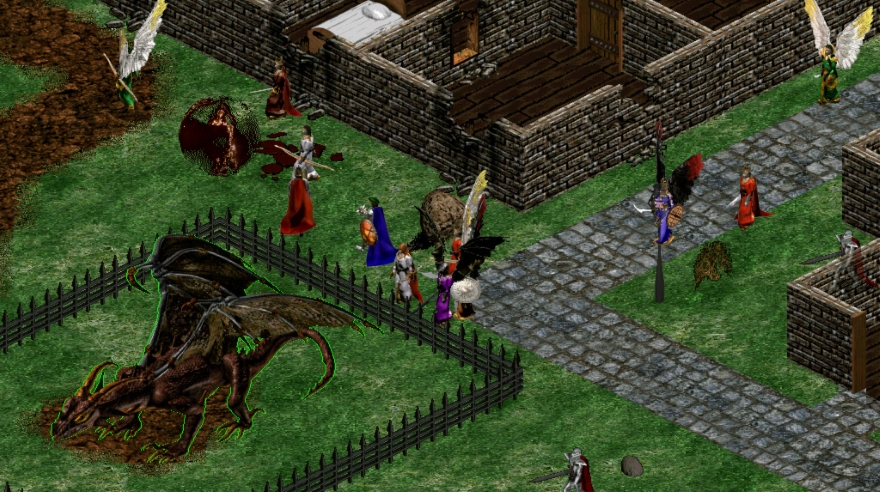 If you ever talk to someone who played The 4th Coming, it’s imperative to ask him or her which server that person called home. The studio had no compunction against licensing out servers to interested parties who wanted to set their own rules. Thus, there were several (and still are) shards that had wildly varying rulesets, including story, PvE, and PvP features.

The rise of the MMO in the early- and mid-2000s started hitting The 4th Coming hard, and many of these servers closed doors. The concept of the server-for-hire remained in effect until fairly recently in 2012, when the current owners of the game decided that they would no longer be granting licenses to new buyers.

A new era, an enduring game

Vircom Interactive held on to The 4th Coming for the better part of a decade, even though its population was slipping and sliding downhill. The company was also attempting to launch a second MMO, Blackmoon Chronicles, but had limited success with that too.

One of the server operators that handled the Realmud shard, Mark Frega of Dialsoft, saw the problem grow and the original owners become more disinterested — and he made a play to save the game. Frega offered to buy the entire The 4th Coming franchise in 2006, and Vircom agreed.

Under new ownership, The 4th Coming began what the devs were calling the “version 2.0” era, possibly in the (so far unrealized) hopes of bringing the game up to patch 2.0. Steps were made under Dialsoft’s leadership, and the game went from version 1.25d to 1.7.

The development was done only by appealing to the community to pitch in and help. Players began to contribute time to these patches, although they were never paid or trained to do so. While progress was made initially, it started to slow down to the standstill it’s at today.

Still, The 4th Coming endures even to this day, 17 years after its initial debut. If you’re looking for a blast to the action RPG past, check it out and see if grand adventure awaits!