Spring started splendidly this year. While all may not come up roses in the world at large, plenty of good deeds and uplifting stories have bloomed all over the MMOverse this month, with touching tales from RuneScape, Lord of the Rings Online, Elite: Dangerous, and Guild Wars 2. Pick from the stories below and revel in the sweet scent of kindness and charity we are privileged to witness and be a part of.

April saw studios jump on board various fundraising ventures. Jagex led the charge highlighting mental health awareness and raising funds, while Extra Credits put out a call to encourage more developers to depict mental illness responsibly. ArenaNet also committed to participate in a charity event to support an organization giving voice to a marginalized community. Other stories celebrate the impact individuals have on us and our communities, including a final farewell party in Middle-earth, a father’s memorial in deep space, and immortalized pets.

Gaming and mental health issues shared a common lack of attention from the mainstream for quite a long time. Thankfully, both are starting to come out into the light more. And there are times the two share the same spotlight, such as the fundraising efforts of Jagex this past month. The London-based studio spent part of April highlighting in-game and real-life fundraising events to support two mental health charity partners, CPSL Mind and The Prince’s Trust. The RuneScape community come together with the mods for activities that ranged from Easter hunts in-game to long walks and even a 20-mile cross-country obstacle course!

We all know video games themselves can do good in the world, so why not aim that at improving awareness of mental illness? Extra Credits created a YouTube video on how video games can do better at portraying and even helping mental illness instead of perpetuating stigmas, stereotypes, and myths. The show includes two guest writer game developers who also have ties to the mental health field: Heidi McDonald, who is also an author, and Dr. Kelli Dunlap, who has a doctorate in clinical psychology and a masters degree in game design.

The video offers examples of games that have done it right by including mental health professionals or those who’ve experience it in the planning like Hellblade: Senua’s Sacrifice did, or by offering warnings or ways to skip content that might create mental health crises in players like Depression Quest and Anamorphine have done. Check out all the ways to design more thoughtfully regarding metal illness in the video below and by visiting IThriveGames.org.

Celebrating life and friendship in LOTRO

We’ve seen a number of memorials for players who have passed away in many different games. But in the Lord of the Rings Online, players got together on the Crickhollow server to have a final farewell for a dying friend before she was gone. Rosalie Rumble of Second Breakfast wanted one last joyous party with her friends, and her kinship threw her just such a bash with music, games, tributes, and — what every hobbit wants  — (virtual) food. On Sunday, April 7th, 2019, folks gathered at The Bird and Baby in in the Shire, and celebrated Rosalie, whose health was very frail by this time. Regardless of the cost of getting folks together, spending time with those you love before they’re gone is priceless. 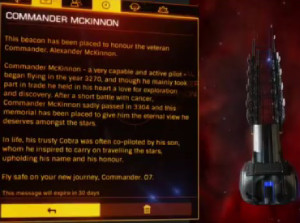 Elite: Dangerous builds a beacon in honor of lost father

Frontier Developments immortalized a fallen player with an in-game memorial positioned out in space. Discovering this beacon sends players the memorial message for Commander Alexander McKinnon, who lost a short battle with cancer. McKinnon had loved exploring in Elite: Dangerous and was a part of the space game from the beginning.

His son, Commander OrangePheonix, shared a very touching video on Twitter of his first visit to his father’s memorial. Warning: There are tears in space.

I'm happy to share this video of my first visit to my Fathers In-game Memorial.
My wholehearted thanks to @PaigeHHarvey and @frontierdev for all their help in allowing my Father to be immortalized in a game he has loved and played since 1984.

A bunny beyond Easter: Immortalizing pets in game

If you have a furbaby, you know it is just as much family as any of those bipedal siblings and such. And there are a number of devs who have immortalized their pets in games. Some games are even created based on their pets! Cats, dogs, and even bunnies are represented. The pups are often offering comfort or adventure, such as developer Matthew Holland’s two dogs, Emilie and Buddy, who are on a quest to find each other in Divinity: Original Sin. And then there are the cats: Cats who do cat things! Catlateral Damage, a game all about a cat tornado of destruction inspired by Nippy, the childhood cat of developer Chris Chung. A number of other cats are sleuths!

And then there are bunnies. In Guild Wars 2, a special miniature bunny pet is a tribute for developer Chelsea Mills’s sister; Mills designed the pet when her sister’s beloved 10-year-old rabbit, Ramona, leaped across that rainbow bridge. Players had to learn the secret ingredients for the recipe in order to make one for themselves.

ArenaNet hops on board gaming for charity

Speaking of GW2, Arenanet has jumped on board a recent charity event in Bellevue, Washington.  Called the Mox Gauntlet, this annual event is a board game tournament that raises money to support local charities. This year’s benefactor will be El Centro de la Raza, the Center for People of All Races, an organization that advocates for the Latino community. Four devs — Mike Zadorojny, Isaiah Cartwright, John Hargrove, and Steven Stadnicki — will represent the studio at the tournament later this month.

Want to watch the non-virtual action play out? See how well these devs do by tuning in live on GW2’s Twitch. It all starts at 1:00 p.m. EDT on May 19th, 2019, and runs all day. Folks who want to donate to the cause can do so by visiting the official fundraising page. There will also be giveaways for viewers upon reaching fundraising milestones.

Earlier this month, a devastating fire broke out and severely damaged the Notre Dame Cathedral in Paris. Help in rebuilding this real-world iconic monument might come from the virtual world — namely, Assassin’s Creed Unity. Ubisoft spent a great deal of time and effort making sure the Notre Dame in the game was a detailed recreation where even the texture of each brick was correct.

Reddit’s gaming hub has shut down for April Fools’ Day, but it’s no laughing matter