END_OF_DOCUMENT_TOKEN_TO_BE_REPLACED
Superdata’s July report on online gaming revenues is in, and there are some predictable bits and some surprises. On the P2P MMO front, the lineup is exactly the same as last month, with World of Warcraft coming out on top, followed by the popular-in-China Fantasy Westward Journey II, Lineage I, Star Wars: The Old Republic, and TERA’s western version.

What’s new to the lists is Guild Wars 2: It showed up this month as #4 for “top-grossing premium PC games by revenue” behind Overwatch, CS:GO, and Minecraft. Whoa. Apparently the new seasonal content was a big draw.

Pokemon Go also debuted in the mobile lists this month as literally the most successful mobile launch in history. Sorry, other mobile games. And Overwatch dropped down to fifth place on consoles, what the firm calls “an expected result of pay-to-play games’ upfront monetization strategy.”

As always, we must point out that Superdata’s categorization will likely not align with most MMO players’ definitions; for example, it considers games like SWTOR and TERA pay-to-play rather than free-to-play like League of Legends, and it lists games like LoL and World of Tanks as MMOs. 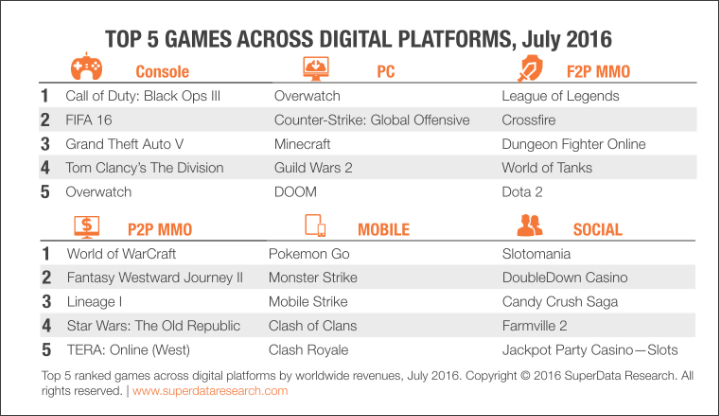 Check out some of our more recent posts on Superdata’s research: