What happens when a group of dislodged City of Heroes fans attempt to bring back the spirit of their favorite MMO while marrying it to another favorite geek pastime (in this case, Star Trek)? You end up with Ship of Heroes, an in-development title that’s holding a torch for the popular superhero MMO… in space. We sat down with Heroic Games CEO Casey McGeever to find out more about this potential game.

Massively OP: For those a little unfamiliar with the project, can you give us your quick elevator pitch for what Ship of Heroes is?

Casey McGeever: Ship of Heroes is a new MMORPG in development, which is a spiritual successor to City of Heroes. We’re combining the best elements of hero and sci-fi games in a setting 500 years in the future. 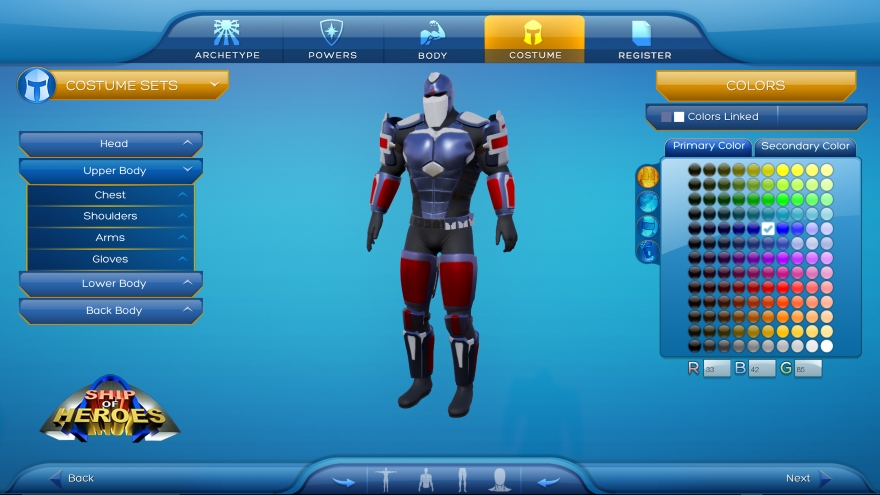 How long ago did work begin on this game? Were any of you in touch back in the City of Heroes era?

Several of us played City of Heroes together, but we only started serious work on Ship of Heroes a bit under a year ago. We’ve been progressing very rapidly and are achieving our scheduled milestones.

I’m still having a hard time wrapping my head around the concept of a giant city-spaceship that also somehow is populated by superheroes. Separate, they’re two fun concepts, but together it seems like they need a lot of explanation to fit. Why not just create an earthbound superhero game? Why complicate it with space travel while still trying to create an in-game illusion that everyone is still adventuring in an earth-like city?

This is a good question. We’re taking the idea of superheroes to the next level. But we recognize that there is a question in people’s minds about the scale of the setting — how do we get cities inside a ship? We will be releasing a version of one of our development tools to show the ship and explain how the cities can fit inside.

The scale is certainly one detail to be explained, but going back to the two concepts: Why put them together? Was there just people who were both City of Heroes and Star Trek fans on the team and wanted to jam them together to see what happened?

If superheroes exist in the present day it follows that they would still exist in the future. This is something that has not been tried yet. We think the future setting with additional worlds gives us much more canvas to enable a bigger story and allows our players to have more fun than another earthbound hero game.

In comparison to City of Heroes, in which vital ways will Ship of Heroes be similar — and in which ways will it differ significantly?

We’ll maintain the upbeat tone and art style, perhaps even more cheerful. And of course we plan to deliver a huge variety of powersets and playstyles. Far more than CoH did — eventually.

Of course, visiting planets is new. We’ll be taking a different approach to PvP compared to where CoH ended up, where a limited set of powers were really useful. We intend to expand crafting and trading compared to CoH, and we are completely re-thinking the concept of jobs for characters in the game. We’re linking day jobs, missions, and unique temp powers in a completely new manner.

So how will planetary visits work? Will the ship travel to them on certain dates, or will they be accessible by level, or what?

There will be elements of both. The ship has a schedule and route, so it will arrive and also return to locations on a schedule, But we also plan for players to be able to unlock the ability to go to any planet. Some planets will be too dangerous to attempt with a new level one character, but players will know the schedule and be able to plan in advance.

What is your in-game explanation for why this ship has so many superheroes on it?

The key origin story is that the ship itself started with some heroes from earth, but that the engines and advanced technology are powered by a super-material called Unobtanium. Proximity to Unobtanium has beneficial side effects including accelerating human evolution. So heroes are born aboard the ship at a much higher frequency than they would be on a planet. In the backstory, Unobtanium has positive effects on the entire population, not just the superheroes.

Will there be playable supervillains as well?

Right now the answer is no. The population FHS Justice is much more culturally unified due to the threat of attacks by hostile alien species. The few human villains are not player characters. But we do respond to the desires of our playerbase, so it is possible in the future.

Fair enough. You posted an article saying why this game needs to exist, primarily from the perspective of City of Heroes fans looking for a new home. But there are three other CoH spiritual successors in the works, as well as Champions Online, DCUO, and Marvel Heroes. Why not play in one of those or collaborate efforts with one of the other spiritual successors?

Are you concerned that with three other spiritual successor projects in the making that it might be difficult to secure player funding?

No, not really. We are delighted by the positive response we have received so far. There is enormous enthusiasm for Ship of Heroes, and our community is growing every day.

Have you reached out to any ex-Paragon Studios employees about this project?

We want to build a little more of the game so that we have some really cool stuff to show, then reach out to them. We’re still in the pre-alpha stage and have not had a crowdfunding event yet.

How large is your team right now? Are they all volunteers or is anyone drawing a salary? Are there plans to bring everyone together under a single physical office space?

We have a small team and some are volunteers. I do not draw a salary as CEO because I want this game to succeed. The other members of the team are paid, highly skilled professionals. We do not plan to bring everyone together under a single office location because we have a team that is happy and productive working remotely, and we don’t need to add office costs right now.

What will players be seeing from your team over the first half of 2017?

We’ll be introducing more of our signature NPCs, plus the piece I mentioned about how cities fit in a very large spaceship, a video of the character creation system, and more information about the combat and game mechanics. After that we’ll have the crowdfunding event in April and with that we will show some more video of gameplay.

Does your staff have the expertise necessary to create a full-fledged MMORPG? Do any of them have prior experience working on such games?

Yes, our staff is highly experienced. For example our environmental lead has shipped 26 games, including some of the most famous games of the last decade. Meeting our schedule and producing the elements we have already shown is proof of our expertise.

Can you name any specific MMOs that your team has worked on in the past?

We checked with our team, which has been in game development for such major titles as Halo 5, Ryse: Son of Rome, Command & Conquer, Ratchet and Clank, and Lands of Lore. And of course our team has extensive experience with modding games, especially those in the Elder Scrolls universe. None of us has been involved in development of past MMOs.

I am not aware of any of the COH successors having dev team experience with other MMOs. In fact, I’m not sure who the dev team members actually are on the other projects. We publish our dev team bios and pictures so people can see who we are.

I’ll point out that the tools and assets available to developers today are substantially better than they were in previous years. Currency with the latest technologies is a critical asset that our team brings to the project.

How much input from the community are you seeking for Ship of Heroes?

We have a clear vision of how we are going to make this game great. At the same time, we listen attentively to our community, primarily through our website. We have a web survey, multiple polls for our members to vote in, and forums in which our community can give us ideas and feedback. We have already incorporated a couple of ideas from our community, and this is going to continue.

I’ve noticed the polls; they say a lot about what your team is thinking about. So what funding or capital have you already attained and from where?

We’re privately funded and can take the project forward to the Kickstarter. We have not sought outside funding from the game industry.

Are publishers a possibility in the future, with or without a Kickstarter success?

I do not rule it out, but we would rather make the game on our terms – we’d prefer that. We’d like to be able to keep this game running in the long term no matter what, and we think that is an important consideration for our players.

How much money will it take to fully create this game as envisioned?

It is somewhat open-ended. A reasonable number for any MMORPG is one million dollars. We have a very low-cost, high-efficiency development team. But we also have a development plan we think allows us to deliver a really fun game with enormous expansion possibilities — more ship levels, new planets to explore, more archetypes, and powersets, and so on. The more money we receive, the more we can build and the faster we can build it.

What gets you most excited to work on this game? What drives your passion for Ship of Heroes?

I love having the opportunity to make a game that people can enjoy playing with their friends for years. In the end, it is all about the player experience.

Thank you for sharing this with us!

I really hope this launches! Everyday, COH gets further & further in the rear-view mirror and that sucks.