In this past weekend’s Make My MMO, we noted we were keeping a close eye on Temtem, a clearly Pokemon-inspired “massively multiplayer creature-collection adventure.” It hit Kickstarter last week and at the time was really close to its $70,000 goal. I’m happy to report today that it has now zipped past that goal and will assuredly fund; as I type this, it’s closing in on $100,000 with almost a month still to go.

“The days of traveling solo are over; in Temtem the world is a massively multiplayer one. Tamers from around the world can join and you will be able to see them around you, living the adventure with you and fighting to become the best Temtem tamer. Chill with strangers, make new friends and battle them or trade your goodies; the dynamic online world is full of possibilities.”

Stretch goals are naturally in order as the game keeps attracting funding. At $90K, contributors unlocked what is basically a hardmode roguelike ruleset; at $120K, devs are eyeing arcade-style minigames.

“We’re not hiding the fact that we’re heavily inspired by [Pokemon], and that our plans for Temtem are basically to make the Pokémon game we’ve always wanted to play,” Spanish studio Crema says in its thank-you-for-funding-us update. “We wanted to make that clear in our presentation video, and that’s why there are some scenes that are very similar to the ones you’re familiar with in Pokémon. That said, we’re looking forward to changing some of the things that are maybe too close to Pokémon (the trainer intro, the evolution scene…) and giving Temtem more personality to stand on its own.”

As we previously covered, the game boasts adorable graphics and critters, a breeding system, housing, character customization, a story campaign, and yes, a co-op online world to romp in. Just bear in mind that when this studio says “massively multiplayer,” it’s not saying it’s your standard WoW clone.

“When you think about an MMO or MMORPG you probably think of enormous games like World of Warcraft or TERA, in which you have an endless array of possibilities (raids, guild wars, infinite quests, enormous dungeons, a never-ending realm…) but our vision for Temtem is a lot smaller than that. The core idea behind Temtem is to build a classic adventure game with a focus on the story campaign, but with online elements added around it (seeing other people online, interacting with them to battle, trade, or just to talk and share experiences).”

As I was prepping this post, my toddler came over and tried to push these skill icons on my screen. They’re hypercute, right? 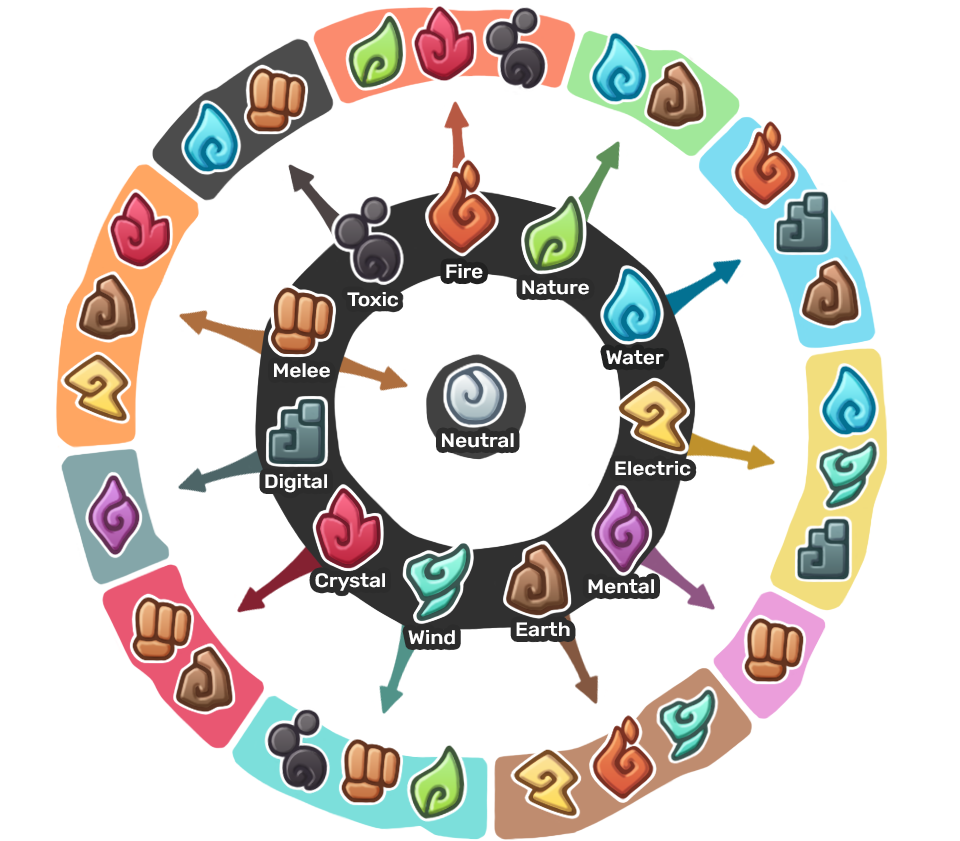 For all those saying this game will be shutdown due to copyright. Go to your app store, type in Pokemon games, and look at the dozens of Pokemon style games that have been on there for YEARS! By this logic, I guess Forknite might as well shut down, cause they are similar to PUBG. Also all the MMOs that have copied the WoW style of gameplay might as well call it a day too, and shut down.

Pokemon has grown stale. It’s nice someone is actually bringing new life to that genre. The fact that Pokemon has yet to do a REAL MMO in 15 years is just asinine.

This game will never see the light of day, I can already see integral parts of this game Nintendo can claim are clear ripoffs from their Pokemon IP.

Does this company even have legal advisers, cause if they do they need to fire them and hire new ones.

The art and animation are superb, consider me hyped. I will not be kickstarting it atm, but I will definitely be watching this develop.

warning to anyone thinking to back this.

the amount of money they are seeking is not nearly enough to make this kind of title. that should be the biggest and only red flag anyone needs. do not back this, you will lose your money.

they say ‘we are being realistic with our budget’ when they are clearly not.

Not always a red flag, many times the funds sought are to “finish” development not fund an entire development. also they could have funding secured partly from a publisher etc..

If your worried, ask them ;)

The game looks fairly simplistic, the art and animation seems to be taken care of. I think they are largely seeking publishing funds.

That would be my guess :)

They’ve been working on the game for years already.
And clearly, it shows, they have a fairly advanced prototype up and running.

If you read the kick starter this isn’t their first game. It’s like the 6th or 7th. They had the funds but wanted to bring the community in early and kickstarter was a good way to do that. I guess they made some mistakes in their last game where it was kind of to late to fix them.

Silly Alexander, why read the info on the Kickstarter, when you can make wild accusations

I am trying so hard to be patient, but I want this game out now. Already backed the Kickstarter and freaking ready to play

Nintendo and Gamefreak will shut this down, I guarantee it.

As per their Twitter account when asked if
“is there no possibility that Pokemon can stop the project ? Because they have already done it with a lot of mobile games which were Pokemon like.”

“We’re not using any patent or copyright from Nintendo. Switch already has several games very inspired from other Nintendo games (Brawlout, Wargroove, Oceanhorn…).”

Is that reply from them some kind of joke.
Switch is from Nintendo you morons ! Why would they sue themselves…..!
Wow, that reply just told me everything I needed to know to not even bother with this company.

Because Brawlout, Wargroove and Oceanhorn are not Nintendo games.
And they are on Switch.
There’s a long history of Nintendo clones on Nintendo platforms that weren’t sued into oblivion, because it doesn’t work like that.

Nah.
They don’t have a monopoly on monster catching.

You can make a clone of anything as long as you don’t steal assets (artistic or otherwise).
Even if PUBG corp would like to forbid it.

There are a enough similarities in the art style where I’d be wary though.

Thankfully they are planning on changing the evolve/ capture scenes, but there are a tonne of Japanese games with stronger resemblances to pokemon that have not been shut down. Guess we have to wait and see how the PUBG court case goes.