Inside or outside? Like a cat at the door, June had many of us unsure if we wanted to go out or stay in; just as some folks were finally getting out of the house as pandemic restrictions eased, others were retreating right back in to get away from the heat (or illness spikes). Luckily, staying indoors didn’t mean being isolated or having nothing to do. Thanks to gaming, players have been able to come together in many ways, from attending memorials and music festivals in Lord of the Rings Online to celebrating PRIDE in Star Wars Galaxies Legends to even attending a class in World of Warcraft! One neighborhood decided if they couldn’t congregate in meatspace, they could come together in Azeroth.

The start of summer heat didn’t slow down good works, either; studios and devs continue to come together for for the benefit of others. Warframe devs participated in the big GCX marathon fundraiser for St. Jude Children’s Hospital, while a developer in Scotland took things even farther by creating a special videogame uniquely designed to provide speech therapy for the elderly who are suffering one of the many illnesses that cause problems with the voice, such as a stroke or Parkinson’s Disease. 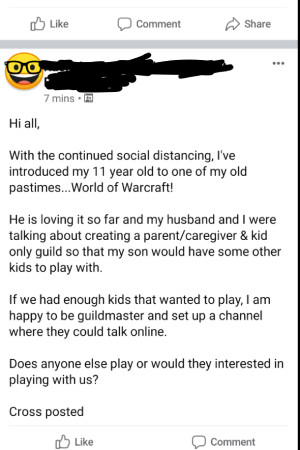 Coming together for community

Who said skills in gaming wouldn’t come in handy? We all know gamers will be the true heroes in the zombie apocalypse, but they are also pretty handy in the current pandemic. One neighbor shared this WoW workaround for kids being cooped up and unable to play outside together. Instead of meeting at the park or in backyards, they would meet in Azeroth. Create a guild and a monitored chat channel and you’ve got yourself a safe place for the kids to play together. If you don’t want to join in, you can rest assured the kids are continuing to develop social skills in a supervised setting with folks they know. It just so happens to be in WoW.

Concerts have been cancelled all over, but not the annual spring show in LOTRO. The Crickhollow server hosted Shirefest 2020, a three-day musical extravaganza where players shared musical talents throughout the weekend while onlookers also enjoyed dance, food, drink, and — of course — pipeweed. Thanks to Second Breakfast for organizing the event!

Coming together in support

There are no shortage of reason for folks to support one another in our world. And different venues give us the opportunity to offer that support from all corners of the world — whether or not you are confined indoors. LOTRO players on many servers held special memorials to pay tribute and their respects to Sir Ian Holm, the actor who portrayed Bilbo Baggins in the movies. Events included a march to Rivendell, fireworks at Bag End, and a walk to Celondim Docks. At Bag End, so many showed up that it broke the Shire on that server!

So many people attended that it ‘broke the whole Shire’ 😭 https://t.co/Y5cXLqLrDA

In SWG Legends, players came together for a player-hosted PRIDE event. Colorful outfits were just the start in this event where folks showed support for the LGBTQ community.Thanks to all who planned and all who participated!

Several of the Legends community hosted an LGBTQ themed event tonight. It was an utter blast! Thanks for the invite, I wouldn't have missed it for the world. 🥰 pic.twitter.com/04Ur7RAxuo

Coming together for health

In Scotland, one award-winning developer is using games as a way to help people heal and enhance their lives. Already a part of creating a video game to help children with Cystic Fibrosis do breathing exercises with the company Konglomerate Games, Computer Game Applications Development student Jamie Bankhead has developed a solo project aimed at improving speech therapy for the elderly in the wake of illness and injury. Bankhead’s goal was to use gamification techniques to turn speech therapy routines into fun playable experiences thereby increasing participating in speech therapy exercises. He said,

“For people suffering from stroke, Parkinson’s Disease, or one of the many illnesses that cause problems with the voice, speech therapy can be essential for improving quality of life. Unfortunately, often this can be tedious and time consuming and adherence can be poor. I wanted to create something enjoyable, something that changes feels like less of a chore.”

The prototype of this currently untitled game consists of a three minigames, each replicating a common exercise for speech therapy, including facial movement (moving face to keep a ball in air), pitch strengthening (alternating high and low pitches to shoot arrows), and vocal strengthening (using sounds to make the character jump). Bankhead worked with speech therapists to deliver the game, using a survey to gather feedback by indicating how accurately the three games replicated speech therapy. He proudly reported that on average, the games scored 8.6 out of 10. Because of COVID-19, he was unable to do any user testing.

The game was showcased at the Abertay Digital Graduate Show 2020 Online, where Bankhead is graduating. He’ll continue working with Konglomerate Games, a company he founded alongside several other Abertay students that specializes in using games for good (and recently won a grant from the UK Games Fund as well as won the Unloc Enterprise Challenge sponsored by Verizon).

Coming together for class

With the pandemic crisis cancelling classes in person in schools and colleges across the US, one professor made plenty of backup plans to be sure the class could continue uninterrupted. In case of Zoom or Google Meet failing, the class would be held in WoW! The irony of fact that MMORPs that can handle such traffic could help save our education system is deliciously sweet.

And hey, if that didn’t work, this teacher had plenty more fun plans. Get a load of number 5, which instructs folks to practice Morse code and keep their radios in a Faraday cage if infrastructure crumbled completely forcing folks to flee central Pennsylvania. Hey, it could happen!

Coming together for charity

Not a month goes by when studios and communities aren’t raising funds to benefit the myriad of good causes throughout the world, and June was no different. Digital Extremes participated in a livestream event with GCX, a premier gaming event in Florida. This event raised a total of $6M for St. Jude Children’s Hospital! Six million dollars! The Warframe community contributed over $40,000 to that grand total.

Coming together for more warm fuzzies

These aren’t the only warm fuzzies you can relish from the past month. In case you missed ones we already reported on (or you just want to experience them again), here’s a host of other good deeds and feel good happenings that occurred in June. And if you know of any others, please feel free to share them in the comments below!

Lord of the Rings Online players host Shirefest 2020 this weekend

Really looking forward to coming to virtual class without my homework and having the professor boom, “You are not PREPARED!”