Back in 2020, as BLM protests were ramping up across the United States, multiple game devs contributed to the cause of racial equality, including indie games platform Itch.io, whose contributors collectively offered up almost 1500 games as reward for donations. They raised over $8M – and now they’re doing it again for Ukraine as it’s in the midst of a ghastly invasion by Russia.

The Bundle for Ukraine seeks to raise $1M from gamers, who can choose their donation amount with a minimum of $10, in exchange for close to a thousand indie games. As I type this, 66K people have chipped in with only a few thousand bucks left to go to hit that goal. All proceeds will be split evenly between the International Medical Corps and Ukrainian-based Voices of Children organization. [Update: The bundle has continued pulling in aid and has raised its goal several times as gamers continue to blast past it. As of the morning of March 9th, the goal is $4M.]

“The people of Ukraine are under attack. As game developers we want to create new worlds, not to destroy the one we have. That’s why we’ve banded together to present this charity bundle to help Ukrainians survive this ordeal and thrive after the war ends. This cause has resonated with creators around the globe, to the extent that our bundle contains almost 1,000 games, tabletop RPGs, books, etc.”

In related news, apparently Polish studio CD Projekt Red’s support for its Ukrainian neighbors riled up the Russian troll farms, as Cyberpunk 2077’s Steam reviews were bombed with pro-Russian spam over the weekend. Fortunately, Valve has already mopped up and restored the game’s legitimate scores. 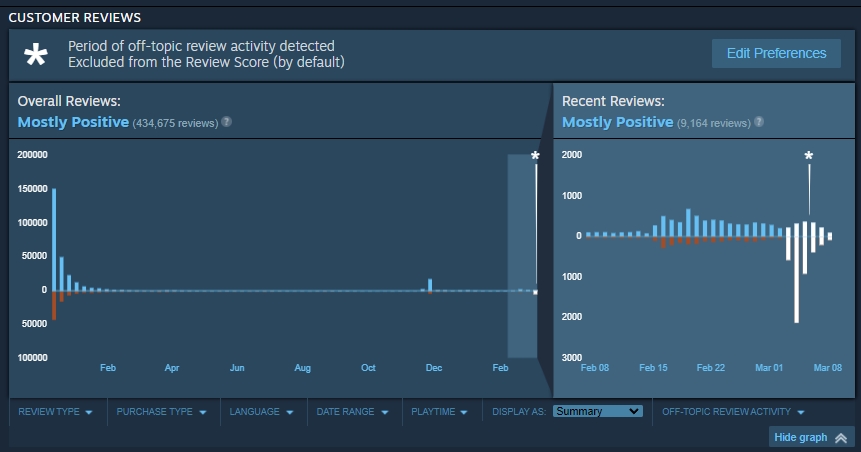 Finally, Twitch announced that it will be complying with the economic sanctions imposed by the US and other countries on Russia, and doing so means blocking payouts to at least some Russian streamers. “We will do our best to pay you revenue you have earned as soon as we are permitted to do so,” the company told streamers in Russia.

Further reading on the game industry’s response to the Russian invasion of Ukraine: