There are landmark years, and then there are landmark years. (Not to be confused with Landmark, which has been gone for years.) You can have a year filed with remarkable, perhaps even journey-altering things, or a year that hits a milestone. EverQuest has definitely had a landmark year; unfortunately, it’s more of the latter kind. Twenty-one years is a remarkable run for a MMORPG, and I am all about celebrating that!

But in what should have been a big year with grand things, the most noteworthy events didn’t do much to dispel the off-to-the-chopping-block vibe. Instead they furthered the feeling, and things that would have dispelled it were chopped! Here we are coming off the big 20th year celebrations that turned out devoid of much celebrating. So yes, 21 feels like it’s mostly just a milestone, but it is a milestone we celebrate, and we celebrate being able to occupy Norrtah for a full 21 years.

This has been the hardest retrospective I’ve done for our EverQuesting column. I want this game to continue and succeed; I want this world to flourish. I love Norrath. Can it, will it, looking ahead? Perhaps due to the most recent events, things look and feel more dire. Maybe there is more positive than we can easily recall. Let’s look back and explore all that happened in EverQuest over the past 12 months since the 20th birthday and see how it really fared. Was it as dead as we think?

And the last shall be first

For our 2020 vision, let’s do things a bit differently and start with the end and move backward. This is what’s on our minds now and may be coloring our perception of the entire year. Perhaps the most prominent event of the 20th year was the recent departure of Daybreak/Darkpaw Games producer, Holly Longdale, just a week and a half before the anniversary. Longdale left for a “once-in-a-lifetime opportunity,” but the timing so close to the anniversary seems unfortunate. Some folks feel this move is a final-nail-in-the-coffin scenario for the beleaguered game and its new studio. Is it jumping ship before it all goes down as many fear? Time will be the judge.

By that same token, time will be the judge as to whether the appointment of Technical Director Jennifer Chan to the new head of Darkpaw Games is just the infusion EQ needs to flourish. There hasn’t been time enough to see what things she will accomplish as producer, and it could be downhill from here on out. We could even finally get our Fan Faire. Chan deserves the time to right the course of the game and help it stabilize and/or grow; I won’t call EQ dead yet just because of a changing of the old guard for someone new. (By new, I mean as head of the company — she’s been working on the franchise since 2008, so she is not coming in blind!)

You no doubt noticed the mention of Darkpaw games instead of Daybreak up above.  Keeping folks in the dark is one of the of those actions that makes folks nervous and even erodes trust. In July of 2019, we discovered that Daybreak was likely creating more studios and splitting up. For a company that many worried would be split up and sold off as soon as it was formed, Daybreak’s creation of Darkpaw Games, Dimensional Ink, and Rogue Planet Games felt exactly like a step in that direction. And though we discovered the upcoming change in summer, we didn’t get official announcement of the studios splitting until January 2020!

Could the split allow each game to flourish better on its own without being tied to the fate of the others? Yes. Could this bode well for our Norraths? Yes. Will it? There is plenty of skepticism for that particular outcome.

An expansion (or more) a year

EverQuest may get knocked for things like graphics or old systems, but it is definitely king of the hill in regards to expansions! The original Norrath has the most expansions of any other MMORPG to date, clocking in 25 over 20 years, and adding in the 26th in the 21st year with Torment of Velious, which launched on December 19th. That is quite impressive! Despite things not looking rosy with layoffs, reorganizations, and the like throughout the years, the studio has still pulled off expansions. That is an accomplishment that should be applauded.

While expansions are great, sometimes Daybreak falls flat with expansion pricing. The addition of the Friends and Family Edition to the expansion line-up was at first promising but ultimately very disappointing. For $249.99 you’d get three tradeable in-game items on top of the premium’s stuff and one copy of a standard edition. One. Without those three tradeable items, you could get a premium ($139.99) and a standard (34.99) for only $174.98. Are those three items really worth the extra 75 bucks? You could buy three standards and a premium for less than the cost of the friends and family and have more copies to play with them!

Other than expansions, other game enhancements have included improvements to the UI in May 2019, adding an ice shader in August 2019, and the new overseer system (similar to the agents in Secret World Legends except available starting at level 85) in March 2020. One things players haven’t seen but have asked for is a PvP progression server, even staging a protest for it on Leap Day.

Additionally, throughout the year players have taken part in a plethora of celebrations, including Brew Day, Bristlebane Day, Stomples Day, Hard Core Heritage, Pride Day, Death Death Death, Living Legacy, Stone Cold Summer, Nights of the Dead, DDD and GGG, Frostfell, New Year, and Erollisi Day. There is never a shortage of Norrathian holiday events and festivals to participate in.

While it didn’t impact the current development of EverQuest, the death of veteran EQ developer Brad “Aradune” McQuaid in November certainly affected the community. It was a blow to the hearts of many. Daybreak created a memorial in EverQuest to honor his memory and work. Players can journey to East Karana and spend a moment in reflection at the flaming sword buried deep in a stone emblazoned with the inscription, “Aradune Mithara, Outrider of Karana.” 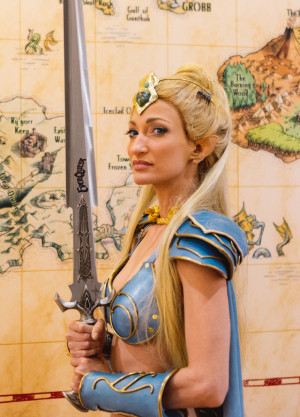 On the list of things that bring an air of despair is the Player Studio. Just before EQ’s anniversary in 2019, Daybreak announced it was making moves to salvage Player Studio, the special program where players designed cosmetics and housing items that other players could purchase. Unfortunately, that program was quietly shuttered in June instead. Loud declarations of working to fix something and then stealthily chopping it lends to the feeling of things going poorly.

The fan fair that wasn’t

Another victim of the chopping block was the 2019 Fan Faire. While we’d been expecting one to celebrate 20 years of EverQuest, it never materialized. There was a short interactive art exhibit at the San Diego Comic Con at the end of April, for those who could attend during that con (you can see a Facebook photo album of the event), but it took all the way until the summer producers letter to officially hear that the anticipated event would not happen in 2019. We’ve now had word that it may happen in 2020; Chan noted in her introduction letter that “a hint about [Daybreak’s] plans for a fan gathering in 2020” would be coming soon. Sorry for the skepticism, Chan, but this has been pushed off so many times now we’ll believe it when we see it. If you are the one to finally pull it off, though, I’ll be right there cheering and applauding.

One of the biggest things keeping EQ going right now are the progression servers, according to Longadale. She talked of how the game was on an upswing since 2015 due to the success of these servers, emphasizing that bringing old players back and keeping current ones was the goal instead of worrying about getting any new players. And the 21st year has seen a number of progression servers, all advancing through expansions at their own rates. Current servers as listed on the official guide are Selo, Mangler, Coirnav, Agnarr, Phinigel, Lockjaw, Ragefire, and Fippy Darkpaw.

Not included in that January guide is Miragul, which was later announced to start in November 2019. Here players would begin as a level 85 with content up through House of Thule. It offers a way to get in at that point and play through without having to start from scratch. The next progression servers announced at the anniversary to be incoming include one named in honor of Brad “Aradune” McQuaid. The other will be Rizlona.

If you want to celebrate EQ, now is a good time. The 21st birthday event going on through May 10th, 2020; this year’s version includes a free level 85 boost for subscribers, an XP bonus, a new mount and other items added to the jubilant merchant, unlocked Veteran Reward AAs for all Characters, and two new player-designed anniversary quests on top of all the old ones.

Personally, I was a bit disappointed to see the 21st birthday celebrating with the same tents and signs as before, all made generic instead of referencing each individual celebration. This makes it seem as if Daybreak feels it was wasn’t worth putting effort into making an individual splash with numbered banners and decorations like before. Sure, this can now be used for every subsequent anniversary, but the generic-ness of it is off-putting.

One thing I haven’t come across this year was special promo packs akin to those we saw for the 20th anniversary. Back then, players could get nab one of three tiers of goody bundles, which included bags, buffs and consumables, and — in the highest tier for $39.99 — a mount, housing items, a familiar, mercenaries, and cosmetics.

What will EverQuest’s 22nd year bring? Will we see the fruition of a Fan Faire? Or will we see the new substudio fold? What are your predictions? And do you see the end of the 21st year with a bit more optimism and promise, or are those nails being pounded relentlessly into the coffin? I myself am sitting back, watching, and waiting.