Path of Exile’s new leagues and updates come like clockwork every three months, just like seasons of the year. But it isn’t often that one fits so well in the corresponding season! Scourge, the next expansion launching on October 22nd for PC (October 27th for console), has quite the creepy vibe, showcasing demons and sowing chaos. There’s also a fitting blood ritual to partake in. Yes, Scourge sounds like a spooky complement to my Halloween.

END_OF_DOCUMENT_TOKEN_TO_BE_REPLACED
Grinding Gear Games’ Chris Wilson revealed many of the tricks and treats coming in this expansion. Let’s dive in!

Say hello to the Scourge

What do you do when you meet a creepy person running from unseen terrors near Halloween? In the Scourge league, you implant a rusty blood crucible into your body that she gives you! Sounds totally reasonable, right? This lovely crucible will slowly fill with the blood of your slain enemies as you adventure. Yup, a very appropriate activity for this time of year.

Once the crucible fills, you’ll be transported to another reality of Wraeclast where the demonic Scourge are wiping out the world. Visit a world of nightmares and fight to survive? Pretty much how I like to spend my Octobers! 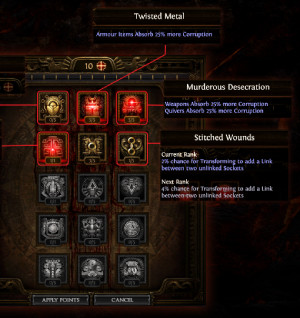 The crucible is the main mechanic of the Scourge league and is how players will dress up their gear. By sticking a piece of equipment inside the blood crucible, players ensure the item will suck up some corruption from the enemies they fight in the scourge’s Wraeclast. Once it’s filled, players can transform that piece into a corrupted item that gains special new Scourged modifiers. But it’s not all treats; the trick is that one of the two is detrimental while the other is beneficial.

The good news is you don’t have to accept the outcome: If at first you don’t succeed with one you like, try, try again. Just pop that item back into the crucible and slaughter more until the corruption fills up again to do a second and even a third transformation. However, that third time had better be the charm because you’ll be stuck with that outcome; items can only be transformed three times in total. One little goody thrown into this process is that “each time it guarantees a minimum tier of beneficial and detrimental mods equal to the number of times it has been transformed,” as Wilson put it. “By the third tier you can start to get some very powerful effects.”

Another treat is that corrupted items can be used in the crucible. Players can even modify sockets by using new tainted versions of chromatic orbs, jeweler’s orbs, and orbs of fusing that are found in the alternate Wraeclast. As long as you find these, it’s much cheaper and easier than trying to modify corrupted items with a crafting bench.

The crucible also gains XP, and players will get to allocate points into its own passive skills options, further customizing their transformations options. Players can unlock every skill, but that will take tons of slaying.

And finally, in the endgame, you can put maps themselves into the crucible to gain the beneficial and detrimental effects on them just like the gear. As Wilson explained, “It can also gain a modifier that changes the behavior of Scourge league in that map entirely.” Unlike gear, maps can be transformed up to 10 times. Be aware that instead of replacing the previous, the new effects could add on or actually stack with the old ones to add extra oomph. 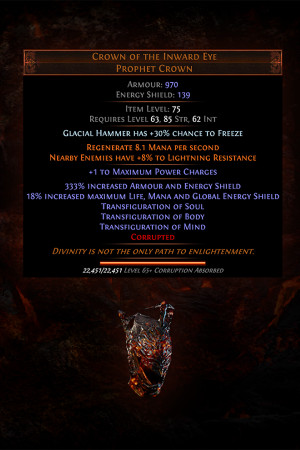 If you think about it, Path of Exile is the embodiment of Halloween: The whole point is going out to collect goodies! And traveling to the new nightmare reality is no different. “You’re not there to save the world; you’re there to find cool items,” Wilson noted. Scourge introduces six new uniques, new skill gems, and six special new link gems.

Of the uniques, Wilson told me that three will be available through the drop tables while the other three will be from specific content (which will be described at a later date). One found from the specific content is the amulet Uul-Netol’s Vow, which lets players to turn any six-linked body armor into a seven-link that allows players to choose whatever support gems they want — including corrupted or awakened.

Of the new skill gems, Wilson says two are new concepts designed to immediately create entirely new builds, one is a utility skill that helps players, another is a variation of another, and the final six are specifically designed for party play.

Energy Blade is straightforward: It turns physical melee weapons into energy ones.Same with Tornado, which creates a tornado that relentlessly moves towards enemies and pulses with damage. Explosive Concoction has been improved, and a sibling Poisonous Concoction has joined the family; it will deal poison damage instead of fire.

If you’ve every wanted a quick undo button in POE, the Temporal Rift utility skill allows players to rewind their characters’ state by four seconds, reverting them to their position, life, mana, and energy shield values four seconds ago. However, players must be proactive in using it; first they must activate the Temporal Rift to start the saving process (saves will happen every quarter second), and it will only rewind you when you activate the skill again.

A really interesting new concept is the link skills. These don’t link to anything on you but link you to another player instead! These six link skills create a special bond between you and a specific party member that provides a big benefit to them while they stay within range. Of course, there’s a trick in this too: The drawback is that if they die, so do you. Wilson highlighted half of these new gems (the other three will be revealed later):

Of course, there is always more to each Path of Exile expansion than just the new league. Beyond all the new gems and loot goodies that come with a new league, Scourge also includes a passive skill tree revamp with passive masteries, endgame improvements, and guild hideouts for the main game, which we’ll delve into next.