Welcome back to our quarterly coverage of Activision-Blizzard’s quarterly financials, the release day of which has become one of the schadenfreude highlights of each season in the last few years in spite of attempts by the company to downplay its import to gamers by obfuscating subscription numbers.

As our readers surely know, Activision-Blizzard has been criticized heavily in recent years following multiple rounds of mass layoffs, the Blitzchung boycott, exorbitant C-suite payouts, shady stock deals and shareholder votes, rejected diversity proposals, and abusive compensation and labor uprisings, to say nothing of the mass exodus of veteran developers, pipeline problems, and plummeting playerbases; it recorded plunging YOY revenues for over a year before COVID bolstered the company’s fortunes in 2020.

But of course, 2021 has been the bleakest year for the corporation ever. In July, the California DFEH filed a damning sexual discrimination and sexual harassment lawsuit against Activision-Blizzard, with the focus on Blizzard itself. The fallout over the last four months has been considerable, with more lawsuits and investigations, executives ousted, state accusations about destruction of evidence, and attempts within the company to finally form a union. (You can get caught up on our full coverage of the scandal right here.)

Industry watchers have surely been curious about whether the scandal would impact the company’s bottom line. This will be the first quarter when any potential impact could show, and given the multiple announcements just Blizzard alone has made over the last week or two for WoW Retail and its cash shop, WoW Classic, Diablo III, Diablo Immortal, Hearthstone, Diablo 2 Resurrected, Overwatch, and BlizzCon, we are anticipating at least some impact. The dissolving of what was left of Vicarious Visions and last-minute attempt by CEO Bobby Kotick to meet (some) union demands and surrender all but a sliver of his compensation should also set the stage for shareholders today.

And what sort of show are we watching? Well, now we have Q3’s results; Q3 comprises July, August, and September. Activision-Blizzard on the whole saw small increase in revenues compared to Q3 2021, owing largely to the Call of Duty “ecosystem.”

Blizzard itself, of course, didn’t have much in terms of releases over the quarter, with the exception of Diablo II Resurrected, which launched in September but whose preorders actually began back in June. It’s apparently thanks to that game that Blizzard’s revenues grew 20% compared to Q3 2020, a quarter when Blizzard launched nothing. “First week sales of the title were the highest recorded for a remaster from the company,” the press release says, not noting how few Blizzard’s other notable remasters actually are. (Or, uh, how poorly received one was.) Diablo Immortal “remains on track for release in the first half of next year” following multiple delays, and Hearthstone revenues were “stable year-over-year.” Overwatch is not mentioned in the report (edit: But it is during the call – keep reading).

The press release also doesn’t specify World of Warcraft revenues, only dropping two sentences about reach and engagement, which tells you what you need to know about WoW’s revenues: “World of Warcraft reach and engagement continues to benefit from the combination of the Modern game and Classic under a single subscription. World of Warcraft is on track to deliver its strongest engagement and net bookings outside of a Modern expansion year in a decade.” (This is presumably largely owning to WoW Classic Burning Crusade’s launch earlier this year, which generated significant revenues.)

That said, the company managed not to lose any more players (monthly active users or MAUs) over the quarter, which is a good sign given that it has already lost 12M total players over the last three years but a bad sign given that we’d typically expect a boost in MAUs with the launch of a new game.

As always, we note here that Blizzard intentionally reports MAUs to obfuscate which games are gaining and losing players. However, Blizzard is usually happy to declare it when a game has increased in MAUs, something it did not do this round.

We’ll be updating below with pertinent bits once the call gets underway. 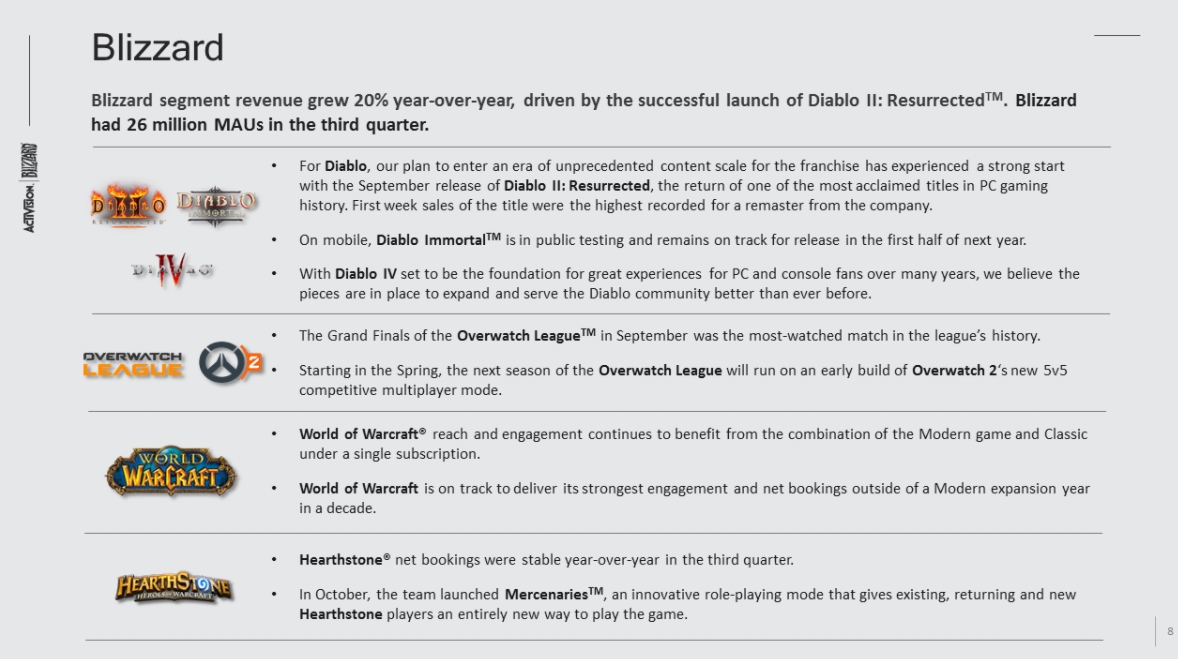 • Diablo 2 Resurrected apparently blew up in Korea, if you wondered where all those players and money actually came from this quarter.
• Overwatch League will use OW2 for its next season.
• Again, Activision is trying to talk about WoW’s net bookings being huge for a non-expansion year, but WoW Classic had an expansion (Burning Crusade), and it was driving those revenues as of Q2. This talking point is extremely misleading and seems to be recasting WoW Classic as playing second fiddle to WoW Retail, which does not jibe with what we know about what’s driving the franchise’s revenues and how both games have been joined for revenue reporting. Either way, upcoming content for WoW is not discussed here, which is concerning. We would normally have information about the 2022 expansion by now.
• Jen Oneal, who was one of the two co-leaders of Blizzard installed three months ago when J. Allen Brack was ousted, is stepping down from that role and leaving the company entirely. Mike Ybarra, who’s already seen a mini-scandal in his first three months, is now running the whole company. Oneal was at one point the top exec at Vicarious Visions, which was fully absorbed into Blizzard last week after starting that process earlier this year. The A Better ABK proto-union has expressed dismay over this turn of events.
• Blizzard revenue all by itself was $493, a $60M increase over Q2 and an $82M increase over Q3 2020. Again, that money appears to be Diablo 2 Resurrected’s doing. 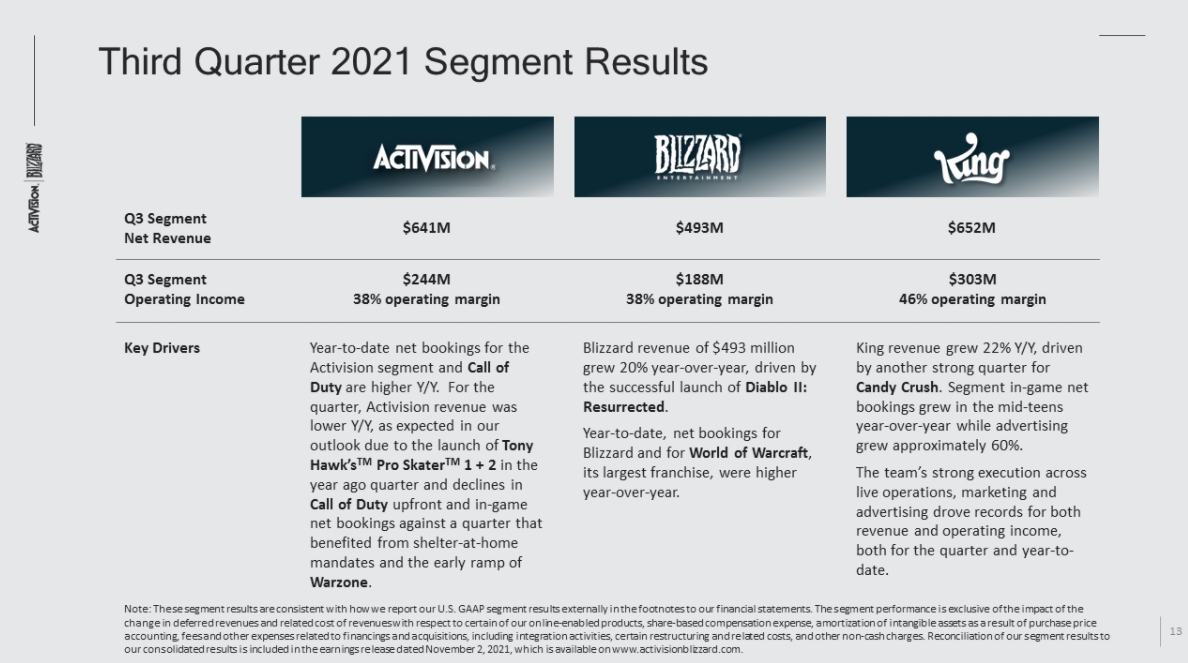 • First question asks for a progress and milestone and timeline update on the discrimination/culture problem. Kotick says he “feel[s] pretty good about the progress.” He argues that retaining the best talent demands a better environment – reiterating the argument for what he’s doing and why he’s doing it but not actually answering the question.
• Ybarra thanks Oneal for her work. He talks up new leadership on Diablo IV and Overwatch 2 (Diablo IV’s last lead was fired this summer, while Overwatch 2 has lost two leads to resignations in 2021). He says the delays will help give them time to build out the games and continue expanding the teams. No release dates.
• Ybarra also addresses the Diablo franchise, saying that Diablo II Resurrected, Diablo Immortal, and Diablo IV each offer different things to different segments of the playerbase (nostalgia, mobility, and grimdark, respectively).
• There’s a blunt question about the company’s stock valuation being at a five-year low, asking about pipeline and the possibility of doing a stock buy back. Activision says it’s being disciplined and patient and has a strong pipeline. It is says it is frequently evaluating stock buy back and can’t/won’t always talk about it.