Happy birthday, sweet sixteen! If you think I’ve waited 16 years to be able to sing that to EverQuest II, well, you aren’t wrong. It isn’t often an MMO gets to commemorate 16 years of life, so I am taking full advantage of it and celebrating with my favorite Norrath.

But beyond the birthday, how much is there to celebrate about the past year?

END_OF_DOCUMENT_TOKEN_TO_BE_REPLACED
Over the past 12 months content has continued to come, albeit generally skimpy and at a slow pace. Communication? Not so much from the producer’s side but bolstered with the surprise addition of a dev podcast. If that snail’s pace sounds eerily similar to the year before, it is; EQII seems to teeter on the cusp of maintenance mode but keeps on inching along. At this point, I think fans — myself included — are conditioned to think that any forward momentum is a positive, no matter how plodding, because something is better than nothing, and losing everything is just unacceptable. And the past year has given us something, including moments of the community coming together for others and a changing of the guard.

It has been a rough year in many ways, and regardless of any thoughts on enough content or communication, I will start by applauding Darkpaw Games, which dedicated time and effort to raise money for Extra Life. Fans were encouraged to join the team, and together just shy of $17K was raised for Children’s Miracle Network, surpassing the $10K goal. Way to go Darkpaw Games and community!

In the same vein of coming together and supporting, one story was more personal. John Smedley and Scott Hartsman highlighted a GoFundMe initiative to help former EQII community relations representative Vanessa Barrera with medical bills from her cancer treatment and after-care costs.

Slow-mo is better than no-mo, right? So the fact that Daybreak continued to add content to the EQII is a good thing. The more time passes, however, the more those doubts of  forthcoming content crop up. That was especially true when the end of summer in 2019 came without any a definitive word about an expansion. Would 2019 be the year of no expansion?! Sure there were whispers throughout the year, but November came and went without the usual launch. It turns out, things were just slower than players have been used to: The real talk about the expansion began in mid-October, the launch date wasn’t discussed until the very end of November, and then  Blood of Luclin didn’t launch until mid-December 2019.

And huzzah for the expansion! There was some real excitement about going to the moon! It was definitely a new area to explore, with all-new story and quests. BoL felt like a needed boost with its new stuff, from the brand-new zones to the Overseer system. But one annual expansion can add only so much.

The two big 2020 game updates were GU 114 in April and GU 115 in August. April’s Showdown at Diaku Corral was an interesting addition that brought the old west to Norrath’s moon. Unfortunately, we were disappointed to discover that the new content was completely gated; only players who completed the entire signature quest line could participate. GU 115’s Reignite the Flames added Fabled Plane of War (raid) and Solusek’s Eye: The Calling (a raid and heroic dungeon), along with some quests for max-level players. Also, fighting underground dinos. The TLE server had a bit of news, with mid-content for Echoes of Faydwer added in April, and Rise of Kunark starting in June.

The announcement of the 2020 expansion just barely came in under the wire of this year, as Reign of Shadows was officially announced at the end of October. Even before they learned the expansion name or any details, players got an inkling of what might be to come with the introduction of the prelude event Haven Bound. Sadly, little story was involved, with just one quest, one overseer quest, and then a slew of crafting repeatables involved with it.

Patches and fixes happened, but actual new content, not so much. Other patches over the year included small item tweaks, expansion bug fixes, a whole lot of name changes, tweaks to changes to challenge raids, overseers, and quests.

if you love festivals, the good news is holidays still happened. The not good news is that new content was not really forthcoming in them. Sorry, but adding just an Overseer quest does not count as new content for the player to experience. All you do is send your agent out, and it comes back with goodies later. Yes, you get a tiny blurb of story, but a couple of sentences and no actual play on the player’s part does not content make to me. For anyone new or returning, however, the pile of things to do in events from December’s Frostfell to February’s Erollisi Day to July’s Tinkerfest to November’s Heroes’ Fest (and everything in between!) have stacked up over previous (16!!) years, so they’ve got something to keep them busy. There were also some random bonus times, such as over the week of Labor Day. And as we prepare for the next expansion, there’s a new prelude event too.

One of the big issues EQII faced this past year was a huge timeout in May – as in, the servers, forums, and such were inaccessible for quite the length of time. There are also world stability and lag issues that still need to be addressed.

Another crash-and burn victim was the big player event that we kept being teased with. There was a very limited local meet-up created at a local brewery in November 2019, but the big event for the community was again a no-show. However, given the mess that was 2020, I have to give Darkpaw a pass on not having something this year. That doesn’t excuse the previous push-backs, but all is forgiven for this year. Next year will be another story, though!

Communication crawl and changing of the guard

Communication is not Daybreak’s strong point, and its substudio Darkpaw Games doesn’t seem much better. Despite how many promises we had otherwise, communication just never picked up. In fact, the number of actual producer’s letters fell again — down to two! Yes, just two official letters. One was in January, and the other was just in October. If you toss in the exit letter from Daybreak’s Holly Longdale and introduction of Jennifer Chan as the new producer (which she calls a community letter), it bumps that number to four. Sadly, less than impressive.

Then we have the whole “What is Happening?” with the studios, where folks uncovered the new Daybreak trademarks in July 2019, but we didn’t get the formal announcement of the separate studios until January 2020. Granted, we had a tease of incoming restructuring happening during layoff announcements in October 2019, but that is still a stretch of three to six months of silence.

While not labeled as a producer’s letter, Chan’s lengthy May forum apology for all the issues experienced in the game over a number of months. She likened the problems to a raid wipe, stating, “We’ve been moving at a breakneck speed to grow into our newly formed Darkpaw studio and ensure that Norrath is around for many more years to come. Unfortunately, in our haste our ‘raid wiped’.” She continued,

“The following are not excuses. We know that we have lost some trust and that we need to work to regain that. As some of you have noticed, we’re trying to be much more transparent and in doing that, let me give you some information about a few issues that we have encountered in the past few months so we can move forward together on the path to great things.”

How did that pan out? Only one producer’s letter came out since May; otherwise, the official news feed has been mostly filled with holiday announcements and the new podcast. Podcast?! Yes! Now there’s a bit of communication! 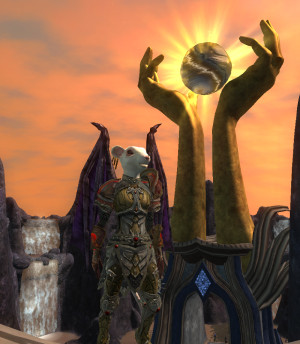 While producers haven’t been so forthcoming with communication, this past year saw a new avenue of communication to players: a special dev podcast. Called Kander’s Candor, Creative Director Kander and Community Manager Dreamweaver talk about all sorts of topics, such as solo play, changes, crafting, and more. The first episode aired in March, and to date there have been 11 episodes. Blows the number of producer’s letters out of the water! I am very happy to see some more communication coming from the studio. I hope this continues (though I also would love to see an official transcript of each episode added to the site for folks who don’t listen to podcasts).

So what about EQII’s future? The opportunity is still there for some great gaming (I got deeply involved in running a roleplay storyline with a friend this past year), but just how long is it going to stay? That feels tenuous every year. But we have some changes happening, and we have a new producer, so I am willing to sit back over the next six to 12 months and see how it shakes out. Now that EQII is old enough for its license, hopefully it only drives folks a bit crazy instead of driving them away. But with it recent track record, you have to wonder.

I hate that each year it’s a game of waiting to see how long and whether EQII survives. Maybe all you can do is forget the future and enjoy what is there now. That’s what I am going to do. And I’ll look forward to exploring the dark side of the moon hopefully before the end of this year.