Back in April, MMO Fallout’s Connor and I had a lil tweet convo about grudges. He was joking that there will be aged gamers on their deathbeds in the far future still griping about Star Wars Galaxies’ NGE. And he’s right. MMO players are absolutely amazing at holding epic grudges, whether it’s for a sunsetted MMO, a bait-and-switch business, a flopped Kickstarter game, or even just a forum ban. 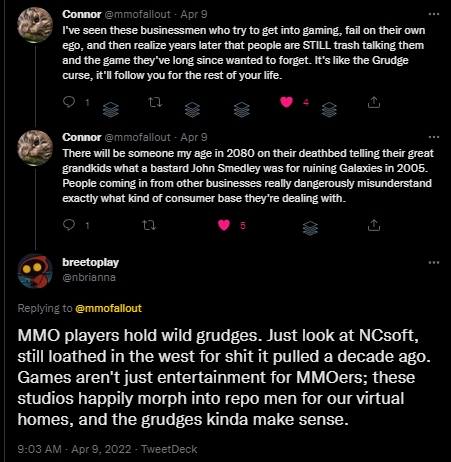 That doesn’t mean these grudges are irrational, however. Some of them make perfect sense. They’re probably not worth carrying to your literal grave, of course, but they’re certainly relevant when making MMO decisions.

For this week’s Massively Overthinking, I want to talk about the grudges we still hold, if we hold any. Are there gripes you refuse to let go of that influence your MMO decisions or beliefs and opinions to this day? And do you think MMO players are particularly disposed to holding grudges given the nature of our genre?

​Andrew Ross (@dengarsw): Star Wars The Old Republic’s F2P model is 100% my grudge. Maybe the fact that Asheron’s Call 1, AC2, and Horizons/Istaria all had monthly updates spoiled me, so any game not offering that stands out in a negative light, while those that have it gain my respect.

I do think MMO players (and online-game fans in general) are a bit more “grudgy” than non-MMO players. I feel like there are many games in a series where one or two are “bad” or “ruin” the franchise, but then sometimes those same people buy the a sequel and are back on the ride. As MMOs are less prone to sequels and are more about consistency over a longer period of time, it’s almost more natural to hold that grudge. I’ve always thought Riot had some interesting lore ideas with League of Legends, but with how the community would be and the removal of my favorite mode (RIP Dominion), I just can’t motivate myself to give them another shot as a game company, even when I’ve heard good things about Ruined King and really enjoyed the Arcane Netflix series. It just feels easier to forgive one-shot games than games that are supposed to be always online, as it feels like a mistake in the latter is easier to blame on short-sightedness, and that honestly feels like a major sin in our genre.

Brianna Royce (@nbrianna, blog): I try my best not to hold grudges, but I also don’t think there’s anything wrong with remembering what people and studios did and holding them accountable, and when some people say “you’re just holding a grudge!” what they mean is “I don’t want you to call me out for bad things I did!” Too bad, honestly.

So for example, there’s a certain developer at Blizzard who, before his Blizzard gig, made a royal botch of a certain classic MMORPG. His terrible decisions across the board led to the direct decline of the game and have repercussions to this day. So when I see his name pop up on projects at Blizzard, I most definitely am predisposed to thinking they will turn out to be crap. But I’m also not going to picket his house or even think about his existence beyond when I read his name in a press release.

On the flipside of that, while I know some folks are still mad at NCsoft for closing City of Heroes while it was still profitable, it’s been three years since players put rogue servers for the game out in public, and NCsoft has pointedly declined to try to shut them down, which has long since earned it my forgiveness.

I also don’t think there’s any way to have been involved in an industry for as long as many of us have and come away with a completely blank mental list of the local assholes. It’s not that big a genre. Heck, my first day in the job 12 years ago, a fellow writer took me aside and told me which PR people to watch out for (and she was absolutely right). I think of real grudges as being more petty, though, like the kind of thing you obsess over long after somebody’s made amends. And I don’t want to hang on to petty. I mean, I play an NGE version of SWG. I even follow Derek Smart on Twitter.

Beyond that, I said my piece in the Twitter thread. When MMO studios build up their MMOs as our home-away-from-home and charge us accordingly, then rip their games offline without remorse, of course people are going to hold a low-key grudge, and they probably should. A properly applied memory is meant to keep you from making the same mistake twice. Lucy’s not going to let you kick the football this time either.

Justin Olivetti (@Sypster, blog): I don’t want to come off as all high-and-mighty here, but I don’t really hold game grudges any more. I don’t find it emotionally or mentally healthy to spend my time calculating lists of why I hate a studio or how a game hurt my feelings 16 years ago. There can be very good and logical reasons why not to engage with companies and games, don’t get me wrong, but when I see the word “grudge” I instantly add an illogical emotional component to it. Grudges are, more often than not, staying angry for the sake of staying angry. I mean, you want to rant about what a studio did that you didn’t like back in the day, that’s your prerogative, but I’m not going to stick around to listen.

And yes, there are some — not all, but some — in the greater MMO community that absolutely refuse to give up their grudge matches. You can easily identify these people by how they work that grudge into any discussion of a game, even if it isn’t relevant to the conversation. My thought is, deal with the situation at the time, vent afterwards — once! — if need be, and move on with your ever-shortening and increasingly precious life.
Well, that came off pretty high-and-mighty. Dang it.

Mia DeSanzo (@neschria): I know Anarchy Online overcame its bad launch, but that will always be the standard I measure weak launches against. It isn’t exactly a grudge, but I haven’t forgotten it either.

And I am not over Wildstar. It was abandoned when it could have been fixed. There was a lot of good there that just needed tuning and TLC. I still miss my Chua.

(Additionally) I think MMO grudges are strong because players expect to spend a lot of their time immersed in the game world and community. And once you are immersed, having the rug ripped out from under you hurts.

Sam Kash (@thesamkash): I don’t know whether it’s because I’m an MMO gamer or just because I’m petty, but I hold grudges like none other. I think I had a good friend give me a hard time about something personal in high school, and I held it against him for about 20 years. Don’t cross me or I’ll cross you out of my life!

As far a holding any specific MMO grudges, I guess I still hold a small one against Warhammer Online. I just always felt like there was a terrible job done managing the balance between the two factions. I think it was called Balance and Chaos. Chaos simply was overpowered. Plus their epic tiered gear looked really sick, whereas the Balance just looked like a coloring job.

Oh, I suddenly remembered my feelings about Guild Wars 2 PvP. Holy cow I just can’t believe how terrible it’s been managed coming from the original series. From balance to combat modes, it’s a true travesty and injustice. I’ll never let that go. It could have been so great, but they really squandered it.

Tyler Edwards (blog): To me, the term “grudge” implies that you’re refusing to play or support a game because of some perceived slight, and I don’t think that’s ever really worth it. If you like a game enough to want to play it, play it. If you’re not having fun, don’t play it. There’s nothing to be gained from trying to punish faceless corporations composed of hundreds of different people, or inanimate lines of code.

But if you just want to know things I’m grumpy about, I’ve got those.

I think it’s easy to hate on Funcom for the mishandling of Secret World Legends, but honestly I still haven’t even gotten over the EPEEN update for the original game (not its real name, I know, but it fits). It may not be nearly so radical as SWL’s changes, but it still robbed the game of some of its personality. It breaks my heart The Girl Who Kicked the Vampire’s Nest got demoted from a nightmare mission. Surviving that one solo was a rite of passage, and once you got the hang of it, it was an excellent mission to farm for signets and XP. Once they launched SWL, they should have reverted asinine changes like that so those of us still playing the original could experience it as it was meant to be played. Forget WoW Classic; I want TSW Classic.

Speaking of WoW, I’m also still salty about its ridiculous assault on flying, but I’ve already written about that at length, so there’s no need to repeat myself here.

MOP Patron Adam Babloyan: That’s an easy one for me: World of Warcraft. I imagine I’m carrying around the grudge a lot of Warcraft (no World) fans are carrying. I joined WoW as a continuation of the Warcraft journey I started with WC3, and instead I got a front row seat to the raid-or-die game it’s become now, mobile game and borrowed power elements and all. I could tolerate some of the gameplay decisions I have issues with, as WoW was never going to be an RTS and I prefer RPGs anyways, but considering they’ve turned the lore of the universe into some kind of Frankenstein’s monster, I’m really over the pale at this point.

I hope Microsoft buys Blizzard, guts it like the rotting fish it is, and reboots the Warcraft franchise. Not holding my breath in the slightest, though.

Every week, join the Massively OP staff for Massively Overthinking column, a multi-writer roundtable in which we discuss the MMO industry topics du jour – and then invite you to join the fray in the comments. Overthinking it is literally the whole point. Your turn!
Advertisement