While still sneaking some spring snow in (bad weather!), April also showered us with some uplifting moments and goodness. Warm fuzzies are far better than white fluffies in the springtime. And you don’t need snow boots!

Over the past month, we learned that Call of Duty created a charity campaign to provide job assistance for vets, the World of Warcraft community raised money for Doctors Without Borders and autism awareness, and the League of Legends community raised a sum for Riot’s Social Impact fund, which sent a sizable donation to help women and marginalised gender game developers. The cast of The Guild also held a drive that supported AbleGamers with proceeds from fun t-shirt sales. And even more heartwarming to help us through those surprise snowy days, we got to meet another gaming granny who joined our world of video gaming, plus we also learned that Grandma Shirley’s Elder Scrolls companion mod is now live. More gamers, more goodness — what more could you ask for? Immerse yourself in the warmth of good feelings in this month’s Massively Uplifting.

April saw a double dose of doing good from Activision Blizzard. One involves Call of Duty and the other World of Warcraft.

May is Military Appreciation Month in the United States, and in celebration of it the Call of Duty Endowment announced a special campaign to “honor veteran medics and hospital corpsmen and to bring attention to the difficulties that they face finding jobs in the civilian healthcare industry.” Dubbed #CODEMedicalHeroes, this campaign will run throughout the month of May with a goal to raise $3 million to fund veteran employment efforts, placing over 5,800 veterans into jobs. To date, the endowment has funded the placement of more than 81,000 veterans into high-quality employment (at a sixth the cost of US Department of Labor efforts), with a goal to place 100,000 veterans into meaningful jobs by 2024.

One way the funds will be raised is through the Call of Duty Endowment Battle Doc Pack, which is available in both Call of Duty: Black Ops Cold War and Call of Duty: Warzone. All net proceeds go to the Endowment. Additionally, #CODEMedicalHeroes will also honor medical service members in-game through the Revival Challenge in Call of Duty: Warzone. Until May 9th, players can unlock a Call of Duty Endowment calling card by reviving five other players. Activision Blizzard will donate $1 to the Endowment for each player that completes this challenge, up to a total of $1 million. And if one million players complete the challenge, folks in CoD: Warzone will earn a double-XP day.

The million-dollar goal has been reached! With these contributions to @MSF_USA, you'll be making a substantial impact on the fight against COVID-19.

As a thank you, Daisy the sloth will be available to claim soon. 🦥 pic.twitter.com/yEivMwBUZ4

On the World of Warcraft front, the community has now raised $1 million for Doctors Without Borders. This organization is working hard to fight against the impact of COVID-19 across the globe and recently restarted an emergency response in India amid a surging second wave of COVID-19 in Mumbai. As a thank-you for reaching the funding goal, WoW players will be able to claim an adorable Daisy the Sloth.

Speaking of WoW, one player’s experience with Autism led to the creation of Warriors for Autism back in 2019. Odyn’s Chosen on Reddit created an annual event to raise money for education and awareness for autistic adults. Odyn’s Chosen wrote, “I wanted to create an event that would highlight us in a positive manner and help educate in a way that I wish I had known sooner.” This year’s event raised over $17,500 for Autistic Self-Advocacy Network; nearly $5,000 of that was raised in a single day during the March Across Azeroth! This is a significant increase over previous years: The first year raised $2,600, and the second, $5,120. Players participating in that march can be seen forming an infinity symbol in the screenshot below. 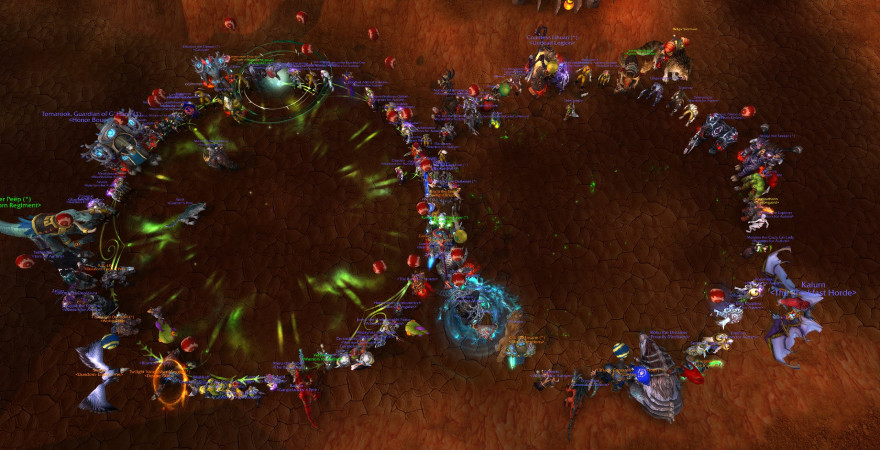 You know what is really uplifting? When more folks really get what is so great about gaming — especially when you wouldn’t expect it. In a generation more known for grousing, “Get off my lawn!” and shunning technology altogether (never mind video games), it’s great to see when some embrace virtual spaces. An article in the Washington Post highlights an 85-year-old great-grandmother from California who beats the quarantine blues with video gaming. Introduced to gaming by her son, Jo Anne de Rosa credits daily playing with keeping her both mentally sharp and socially engaged.

“‘Playing provides connection. I’m playing with real human beings,’ said de Rosa, who lives with her 90-year-old husband and one of their adult sons. ‘Without gaming,’ de Rosa added, ‘I think my mind would have deteriorated long ago.'”

The article also says something we’ve known for a long time: that the stereotype of who plays video games is woefully inaccurate and severely outdated. We knew that women and disabled people are making up larger portions of the gaming populace, but the article notes that nearly half of Americans age 50 and over play video games at least once a month. And those most likely to self-identify as daily gamers are older women. Hopefully we see many more gaming grandmas crop up! Can you imagine how much more fun family get-togethers would be if the massive battles happened in games instead of over Thanksgiving dinner? And who has better time to raid than the retired?

The moral of this story is don’t be afraid to share your gaming passion with your parents or grandparents… or even great grandparents! You might end up with the best groupmates ever!

And speaking of gaming grannies, we reported last January that Grandma Shirley Curry of Elder Scrolls fame was getting a mod developed that will make her a companion in game. Well, it’s ready! Her fans are pretty happy! Check out the awesome trailer Curry shared on Twitter.

Here is the Trailer to my character mod!!! It is Premier right now but will be showing at 8pm my time (eastern) https://t.co/ux9sgDhgF7

The Guild rocs and rolls for charity

By now, many gamers have had some exposure to the web series The Guild, which highlights MMO players. The cast has recently used its celebrity to raise awareness and funds for the AbleGamers charity, an organization that gives people with disabilities custom gaming setups so everyone can enjoy the gaming pastime. The Guild has a Roc and Roll t-shirt that folks can still buy; a portion of the proceeds then go to the charity. Support AbleGamers and get a cool shirt to wear? Yes please!

Reading the Riot act of charity

Riot Games has been in the news plenty for decidedly uninspiring things, so it is nice when we can share some good coming from that way as well. In fact, there are two uplifting moments in April thanks to the generosity of the community.

The studio shared that the League of Legends community raised a significant amount for the Riot Games Social Impact Fund. By purchasing the 2020 community skin, Elderwood Ornn, the LoL community raised more than $7 million. As noted in the press release, this fund was created for the company to “make direct investments into a variety of global organizations aimed at solving some of the world’s most pressing issues.” This year’s total exceeds the $6 million brought in by a previous skin, Dawnbringer Karma.

If you are wondering where those raised funds go, here’s one answer: At the end of the month, Wings Interactive announced that Riot Games contributed $1 million to its fund made to help women and marginalised gender game developers.

A loss in Albion Online

Loss is always hard, and we are saddened to learn that Albion Online lost a devoted community member and player recently to COVID-19. A longtime member of the community, Funstealer helped to shape the game as it developed. Albion devs remembered Funstealer with a Twitter tribute. Our condolences go out to all friends, family, and fellow players.

We're deeply saddened by the news that Funstealer, a longtime member of the Albion community, recently passed away from COVID-19. His dedication to the game & its community helped shape Albion since before its launch, and he will be greatly missed. Rest in peace, friend. pic.twitter.com/yrreM9ZOif

Even more warm fuzzies to enjoy from April:

The Daily Grind: What’s the last positive encounter you had with a random stranger in an MMO?