It is no joke: There is plenty that’s good going on in the gaming world, and we want to share that with you. You may have to be wary of being pranked plenty today, but here in Massively Uplifting, we will only buoy you up with heartwarming stories, touching tributes, and inspiring actions. And just in time for the start of spring, these feel-good happenings have been popping up like daisies throughout March so there is a bounty of smiles to gather!

This past month we’ve seen a focus on friendships forged in both Guild Wars 2 and EverQuest, the gaming grandma got a special gift from Bethesda, we discovered a private memorial in Xsyon, and more. We even got to see PvP rivals band together for the good of the game in Legends of Aria. But that’s not all.

Have you happened across other happy, heartwarming stories? Feel free to send your tips to us at warmfuzzies@massivelyop.com for next month’s compilation.

As much as we might think doing good is only on a grand scale, small individual acts of service and kindness are just as important — and just as meaningful. One of our very own readers and OPTV regulars keeps a quiet memorial going for a fallen friend. Even though not an active Xsyon player anymore, rpgmorules faithfully logs in regularly in order to refresh the tribe lands so they do not disappear. The two met in the survival sandbox game and became friends, building up the tribe Elite together. Sadly, the friend has since passed away, but rpgmorules keeps the tribe active so that all that was built stands as a constant testimony of the life of another.

It’s not big. It’s not flashy. But it is a touching tribute to friendships and the importance of even a single person. I hope the Xsyon servers stay open forever! 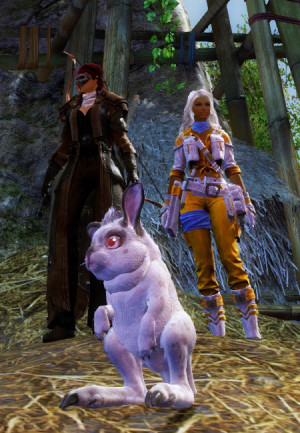 Residents of Tyria are able to share their stories of companionship and camaraderie on social media using #GW2FRIENDSHIPS. Players who only use Facebook and post on the official page, and those without any social media at all can fill out a form on the official site to be included. A number of stories are already highlighted, and whether or not you play the game you can read through and feel the warm fuzzies while appreciating the friendships that have formed.

Although I expected to have more to share on the EQ fan-stories front, perhaps more of those that are being collected will be available at the special fan event and exhibit happening this month at the Comic-Con Museum in San Diego. But one story is already out there, touching heartstrings. This is the story of Veturika. I was able to meet her at SOE Live, and it was a treat! She is an amazing woman who credits EQ with saving her life. It gave her a place to be vibrant, helpful, and active when she could not. (This story is especially poignant to me as it mirrors my own entry into MMORPGs when health did not allow me to participate out in the real world for a time.) Her story was featured in The EverQuest Show, and you can watch it in her own words here starting at the 4:50 mark in episode 2 and continuing at the 2:25 mark in episode 3.

As much flak as SOE and Daybreak have taken over the years (and some quite deservedly so), it was a huge thumbs up from me for the way the studio memorialized Veturika’s nature and spirit within EQ itself, naming a helpful skill, Verituks Perseverance after her.

What do you do when someone hits a milestone? You celebrate… with sweeping?! SWTOR player and YouTuber Swtorista reached a goal of 50K subs, and in honor of that event the community turned out for a cleanup event where players on the Star Forge server whipped out their brooms and banished every spec of dust on the Republic Fleet. Yes, they really did. You can see the conga line of cleaners for yourself! Who are we to judge how folks show support for one another?

Glad to report that the /sweep event was a success. There isn't a spec of dust left at the Republic Fleet. Congrats on the 50K subs @swtorista (Rhinee-Republic-Star Forge) pic.twitter.com/x16R7gq4Sz

Perhaps one of the last places you expect to hear about guilds coming together is in a PvP game where those guilds are rivals! Yet that is exactly what has happened in Legends of Aria. A number of guildmasters, hailing from guilds with very heated hatreds and rivalries in-game, have banded together to create the LOA University, a place to help new players get their footing and learn the game.

Based on the Verdant Earth server, the college was established to prevent new players from being schooled so bad they just left the game. The group of guildmasters, founded by a player named Gandalf, work with new players until they reach level 80 in their skills. Then, these players get recruited into one of the guilds (at which point they are fair game to participate in the rivalries!). The newbies get everything from instruction on game mechanics to going on raids. They also receive protection in-game from those who aren’t a part of the LOA University.

We really do have the best community ❤

Gaming grandma gets into Bethesda

The outside world often mistakenly views gamers as only a certain demographic: young, adolescent males. Sometimes even folks in our gaming community might forget how diverse we really are. And then along come great gamers like Shirley Curry, better known to gamers as Grandma Shirley, to remind us how universal gaming is! And she has quite a passion for The Elder Scrolls, a passion she shares on her YouTube channel. Bethesda even invited her to its offices to meet, greet, and talk shop. But that wasn’t even the biggest part: Grandma Shirley will be a NPC in the next game!

Well, since they made the announcement today about me, as a character in the next TES game …I can show my favorite thing I brought away with me!!! 🥰 pic.twitter.com/lIoEJ3tz83

Although we’ll get to cover this more in-depth at the end of this month, we will spill the beans now that MechWarrior Online’s Piranha Games is partnering with Autism Canada to raise awareness and support for people on the Autism spectrum as well as their families. More details are expected today, and support livestreams will begin tomorrow, April 2nd, 2019. It looks like players will also be able to get in on the action, playing matches to earn “Dad Bot” related items.

Those haven’t been the only stories this past month! We’ve already covered a number of others, but you can keep your good vibes going by checking them all out again. And don’t forget, if you run across anything that warms your heart, feel free to send it along to us to share with the community.

Remember Booty Bay in World of Warcraft? It’s back! In Sims 4 form!